It was confirmed Monday that Trick or Treat in Hellertown is a rain or shine event. That means there’s a high likelihood that this year’s Trick or Treat–scheduled for 6 to 8 p.m. Thursday–will also be a wet one.

The National Weather Service has also issued a hazardous weather outlook for the area for Thursday, when it says “a line of showers and thunderstorms could be strong to severe with the potential for locally damaging wind gusts in excess of 50 mph” Thursday evening. “Given (that) many trees remain fully leafed, scattered power outages are possible,” the statement said.

Heavy rain of up to an inch or more is predicted Thursday and Thursday night. Perhaps ironically, if this year’s Trick or Treat had been held at the same time it was last year–from 3 to 5 p.m. the Sunday before Halloween–the weather would have been sunny and mild, as a storm system that affected the area earlier in the day had departed the region by that time.

Many communities in the area such as Coopersburg borough and Upper Saucon Township held their Trick or Treat events on Friday, Oct. 25.

In Hellertown and Lower Saucon Township, it was the result of an online poll of residents conducted earlier this year that decided the date: Oct. 31.

Now, in response to the increasingly dire weather forecast, some local organizations are announcing indoor Trick or Treating alternatives for families that want to remain dry and out of the elements.

Springtown Volunteer Fire Company in Springtown, Springfield Township, Bucks County, posted on Facebook Tuesday that its fire hall will be open for indoor Trick or Treat from 6 to 8 p.m. Thursday. Set up at table spots will begin at 5:45.

“(There’s) no need to sign up for a spot, but if you have an idea on wanting a spot please comment below so we can make sure we have enough tables set up,” the post says. Table spots may also be decorated, an update indicated.

And in Hellertown, the Edward H. Ackerman American Legion Post 397 at 935 Main Street will also be open for indoor Trick or Treating Thursday.

“We will have tables set up in the downstairs meeting room and the ballroom for you to use,” a Facebook post announced Tuesday. “Please consider setting up there so kids don’t have to trudge too far in the wind and rain that the forecast is calling for. Please arrive between 5:30 and 6.”

Officially, not many municipalities have opted to postpone Trick or Treat due to the impending weather, at least as of Wednesday morning.

The Borough of Bath, however, announced on its Facebook page that its Trick or Treat is being postponed from Thursday to Friday, Nov. 1, from 6 to 8 p.m.

“Due to the forecast of heavy rain, thunderstorms, wind and possible flooding on Thursday, I am rescheduling Trick-or-Treat,” Bath mayor Fiorella ‘Fi’ Reginelli-Mirabito said in a post. “My concern is for the safety of both children and adults crossing the five highways within our borough in those conditions.”

For those who do plan to venture out on Thursday regardless of the weather, raincoats, galoshes and umbrellas will all likely be necessary accoutrements for Trick or Treat 2019. That is, unless some enterprising adults decide to do what a group of parents in Oconomowoc, Wisc., did to protect their costumed kids from rain that threatened their festivities. 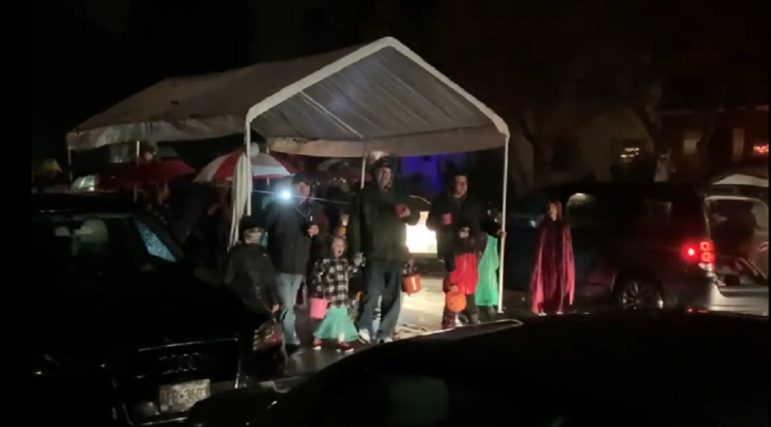 In a viral Facebook video, a group of enterprising parents in Oconomowoc, Wisc., carries a large canopy to protect their kids from rain during Trick or Treat.

In a Facebook video that’s gone viral, the group of parents carries a long, large metal-frame canopy down the middle of the street as a moving shelter.

Since Sunday the video has garnered more than 1.2 million views–not to mention lots of laughs–and been shared thousands of times on Facebook.