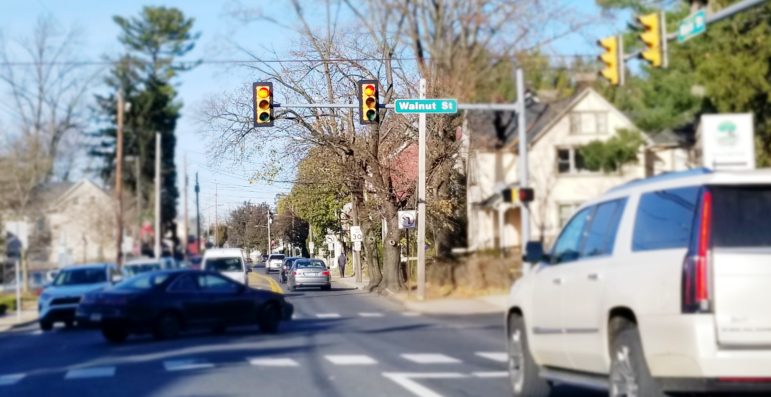 Looking north on Main Street in Hellertown borough toward the intersection of Main and Walnut streets. A left turn lane for northbound traffic already exists. That will soon be supplemented by a left turn arrow, thanks to the findings of a PennDOT traffic study conducted Oct. 22.

After concerns were raised about increased traffic volume that was expected to congest the intersection of Main and Walnut streets in Hellertown during the Water Street Bridge project earlier this year, the Pennsylvania Department of Transportation (PennDOT) conducted a traffic study at the intersection this fall.

Traffic studies are only conducted by PennDOT at times when the volume of traffic through an intersection is at what are considered “normal” levels, which was why the study could not be conducted while the bridge was temporarily closed.

In an email Wednesday, Hellertown borough manager Cathy Hartranft said the study–which was conducted on Tuesday, Oct. 22–did in fact determine that “advance left turn phasing is appropriate for the northbound Main Street (Walnut) approach.”

Advance left turn phasing is an engineering term used to describe the protected left turn phase provided when a green arrow for left-turning vehicles exists at an intersection.

However, local motorists who also hoped the study would find that a green arrow for left-turning vehicles is warranted for northbound vehicles at Main and Water streets may be disappointed by the another piece of news shared by Hartranft in her email.

“The study indicated that advance left turn phasing is not appropriate at the Main and Water (streets) intersection,” she said.

Hartranft said in her email that in light of the study’s conclusions, the traffic signal plan for Main and Walnut streets “will be modified to reflect the addition of a northbound advance left turn phase.”

“This will be placed on Monday’s agenda for council approval,” she added. “Once council accepts the modification, an application for traffic signal approval will be completed and submitted to PennDOT.”