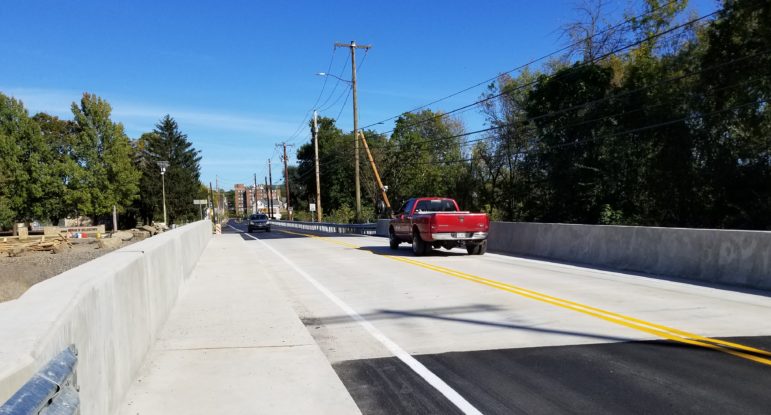 Traffic moves across the new Water Street Bridge in Hellertown. The bridge–which was designed and planned over a period of five years–took just two months to build.

Just a couple of days past an estimated completion date established when the project began, the new Water Street Bridge in Hellertown opened to traffic at 7:30 a.m. Sunday.

The new two-lane bridge replaces an 81-year-old, structurally deficient span that was demolished over the summer to make way for it.

Over the past two months both motorists and pedestrians have been forced to detour around the closed bridge, which is one of the busiest crossings in the Saucon Valley area.

According to PennDOT, which owns and maintains the bridge, Water Street is used by an average of nearly 8,000 motorists a day to cross the Saucon Creek from Lower Saucon Township into Hellertown borough or vice versa.

The bridge’s northwest quadrant is located in the City of Bethlehem, which is where new sidewalk has been installed to connect the walkway on the span’s north side with an asphalt path that leads to several large residential complexes nearby.

A pedestrian-activated, pole-mounted signal has also been installed at the crosswalk on the west side of the bridge, which connects the sidewalk with Heller Homestead Park.

The new sidewalk and signal, it is hoped, will help improve both pedestrian access and safety in the area.

In an email announcing that the bridge was open Sunday, Hellertown officials noted that crews from general contractor Kriger Construction will remain on site for the next few weeks completing finishing work, conducting site restoration on areas of disturbed soil around the bridge and installing concrete handicapped-accessible sidewalk ramps on W. Water Street, between Main Street and the bridge.

The email reminded motorists to continue to use caution when driving through active work zones.

On Sunday afternoon there was no work taking place along the Water Street corridor, which Saturday was closed as crews milled and paved the road as part of the project.

Motorists aren’t the only ones celebrating the bridge’s reopening.

Nearby businesses whose owners say they experienced a drop in sales over the past two months are also happy to have it open once again, so customers can reach them more easily.

Bagel Basket owner Sunny Qureshi, whose bagel shop and deli is located near the west end of the bridge on Friedensville Road in Lower Saucon Township, will be offering free coffee (any size) to customers who mention “Saucon Source” on Tuesday, Oct. 1 in celebration of the end of construction.

Kindred Spirits Books and Gifts is also looking forward to welcoming back customers who may not have visited during the two-month detour nearby, owner June Rose said. 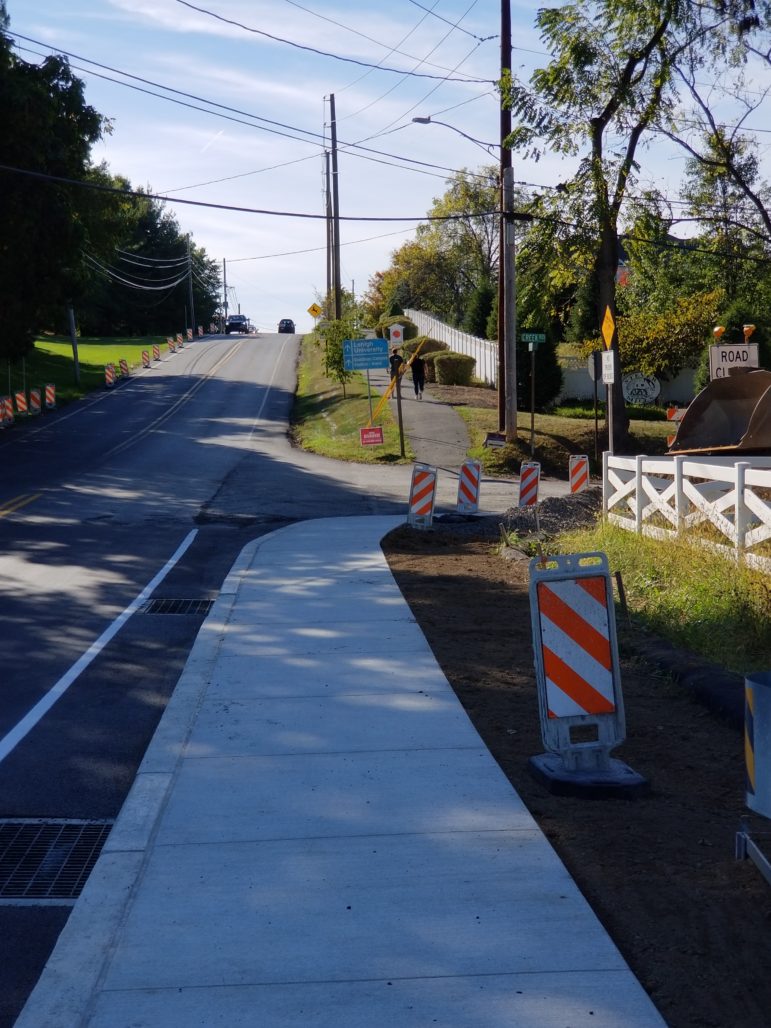 New sidewalk leads from the west end of the Water Street Bridge to Creek Road, on the Bethlehem side of Friedensville Road. Across Creek Road is a path that leads to the Saucon View Apartments and Lehigh University graduate student housing. 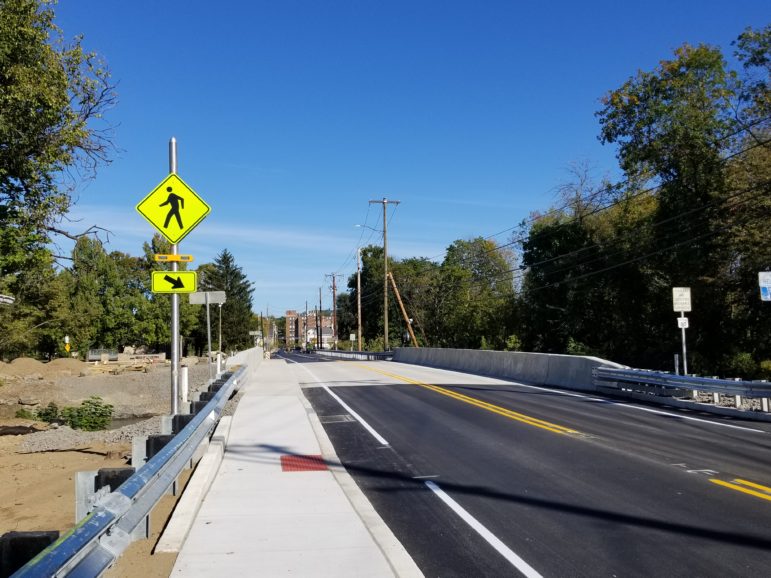 Pedestrian-activated flashing signals have been installed on poles at the crosswalk located on the western side of the new bridge. The crosswalk connects the sidewalk there with Heller Homestead Park in Lower Saucon Township. 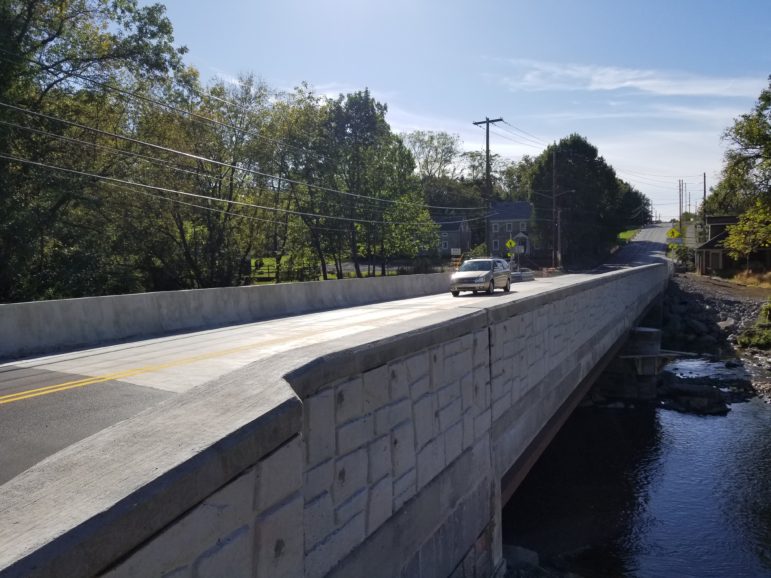 A side view of the new bridge, as seen from Water Street Park in Hellertown. 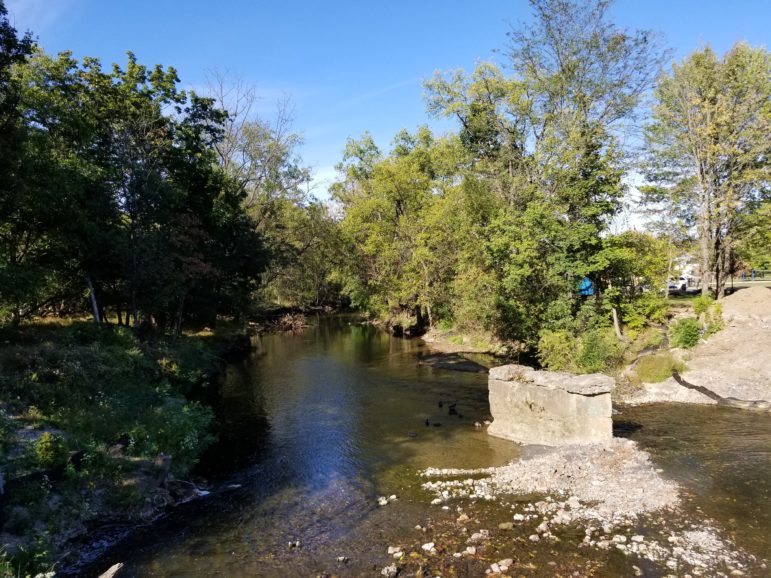 A pier that was once part of a railroad bridge has stood in the center of the Saucon Creek for nearly 150 years. Located just north of the Water Street Bridge, the pier was preserved as a reminder of the days when the sound of train whistles echoed across Saucon Valley.