Are you someone who thinks the youth of today aren’t learning valuable skills, like how to write a letter? If you are, the people behind the Hellertown Post Office’s First Letter Program would like you to think again.

Hellertown Postmaster Joe DiRusso is one of the people behind the innovative program, which teaches kids the skills involved in writing and mailing a letter.

The program was started in 2017 by DiRusso after he received a handwritten letter from his 10-year-old niece. DiRusso realized a written letter meant much more to him than a text, and he was inspired to start a program that teaches local kids how to send handwritten letters in the mail.

Letter writing is part of the second grade curriculum at Saucon Valley Elementary School, and the Hellertown Post Office is within walking distance of the school, so DiRusso began hosting second grade classes for a field trip to the post office as part of the program.

The field trips began in October of 2017.

Second grade classes from Saucon Valley Elementary School walk to the post office with their pre-written letters. DiRusso gives them a tour of the facility and the kids then pick out a stamp, date stamp their envelope and drop it in the mailbox. 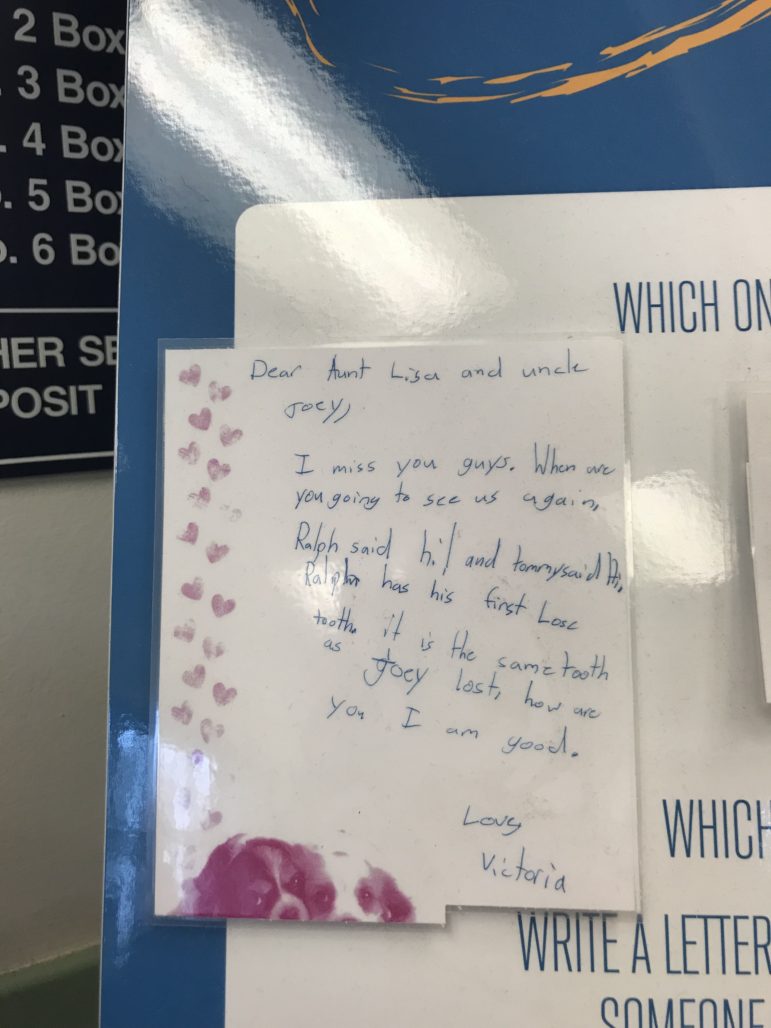 Hellertown Postmaster Joe DiRusso received a handwritten letter from his niece that inspired him to start the First Letter program.

DiRusso stresses that it’s important for kids to continue to develop the skills needed to write and mail letters because in an age in which we’re increasingly reliant on technology for communication, kids will struggle to learn these skills if they’re not taught them.

“Writing a letter is important still. It’s a bit of a lost art, but it’s still important,” DiRusso said. “It means a lot to someone when you send them a letter. That letter is gold.”

This past summer the First Letter Program spread through the community with the help of Noah and Micayla Kates, who are in high school at St. Andrew’s School in Delaware but spend summers at home in the Hellertown area. In addition to the First Letter Program, Noah has been active in the community as both a borough junior councilman and the driving force behind an I-78 beautification effort called the Hellertown Tree Project, which he spearheaded last year. 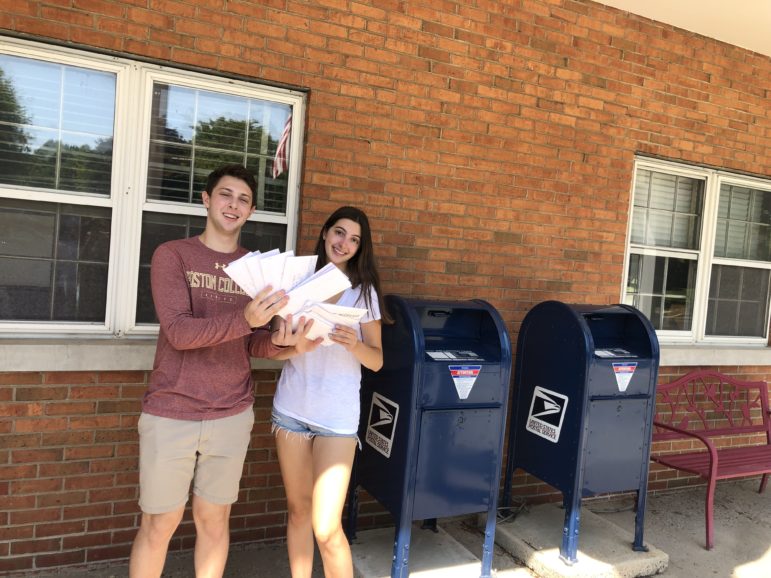 Noah and Micayla Kates with a handful of ‘first letters’ outside of the Hellertown Post Office over the summer. (Contributed photo)

The First Letter Program will have an equally busy summer in 2020, as the Kates’ plan on continuing the program at the same locations. They have bigger plans in mind for the future of the program and are working on expanding it through a variety of initiatives.

They plan on reaching out to the post offices in Springtown and Center Valley to start up First Letter programs at those locations.

Noah and Micayla said providing post offices with a “starter kit” containing the materials necessary to get kids started with writing letters will help the program catch on.

Noah has already brought the program to Middletown, Del., during the school year. He and his peers at St. Andrew’s have been working with youngsters in the area on the skills needed to write and send letters.

DiRusso and the Kates are also considering reaching out to organizations like the Boy Scouts of America and St. Theresa’s School in Hellertown to expand the program’s reach.

DiRusso estimated that the program has produced and mailed around 500 letters already, and with its expansion on the horizon, many Saucon Valley residents may be receiving even more letters from loved ones soon.

For more information about the First Letter Program, contact the Hellertown branch of the U.S. Post Office by calling (610) 838-9351. 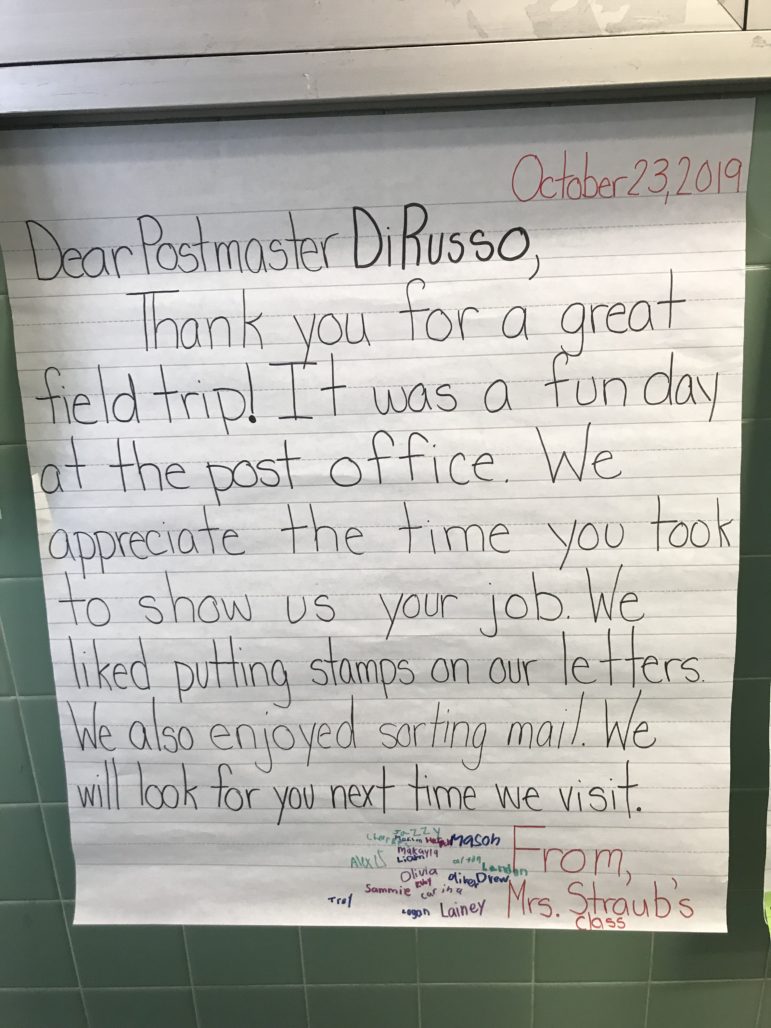 A letter from one of the Saucon Valley Elementary School classes that participated in the First Letter Program hangs inside the Hellertown Post Office. 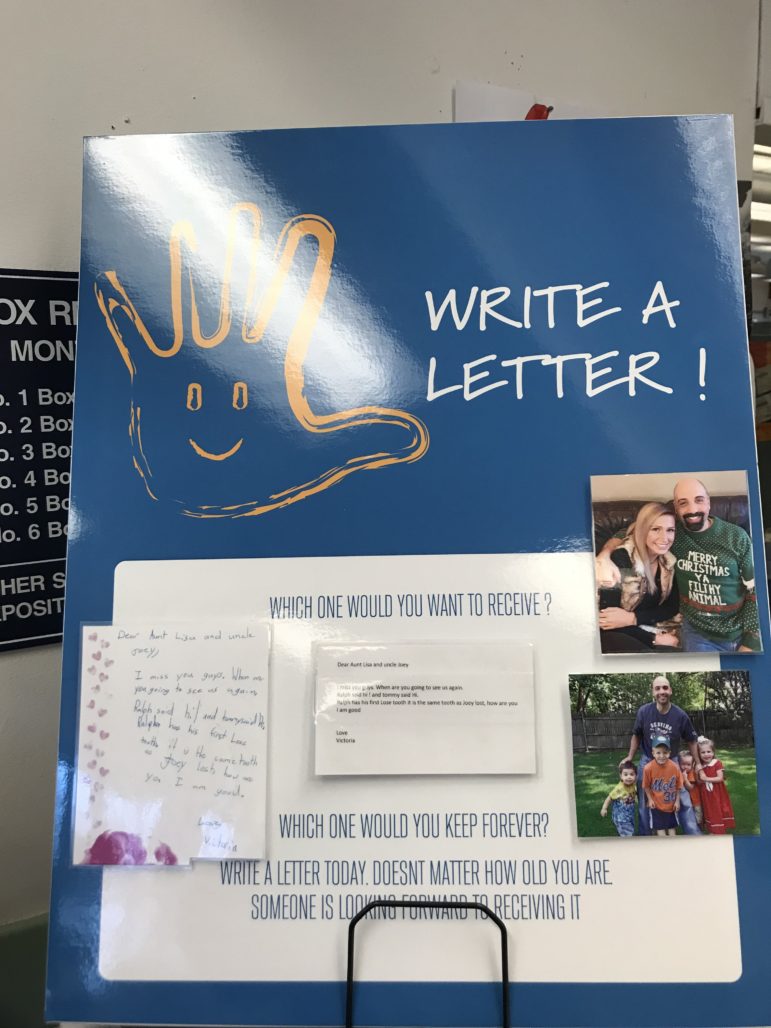