Just over a year after purchasing it, the Borough of Fountain Hill recently sold the property containing the former Hosey–at a six-figure profit–to a private developer.

Formally known as Fountain Hill Fire Company #1, the Hosey was a private club and bar located at 1436 Russell Ave. Many of its members were current or former firefighters in the borough.

The Hosey’s Facebook page announced on Aug. 28, 2017 that the well-known club was closing. Earlier posts mentioned that–like the former Fountain Hill Republican Club, which closed in May 2017–the Hosey had been losing business for some time.

On Redfin.com, the Hosey property was listed for sale for $129,990 in October of 2018, however it was ultimately sold to the borough in December 2018 for considerably less than that. Records indicate it was purchased by the municipality for just $70,000.

According to Fountain Hill Borough Manager Tony Branco, the borough purchased the Hosey with the idea of possibly building a new police station and office on the property.

“Unfortunately, we were not able to find any grants to start with the demolition of the existing building,” Branco said. “After trying for some time, I recommended that the borough put the property up for sale and generate tax revenue.”

The Borough of Fountain Hill did just that, and sold the property to private developer Black Dog Development Partners Inc. in January for $215,000. 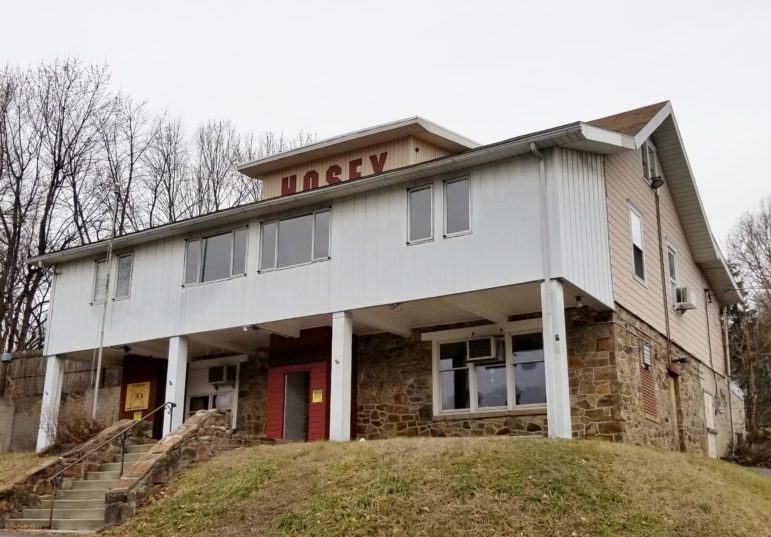 This building at 1436 Russell Ave. was home to the Hosey until the club closed in the summer of 2017. The Borough of Fountain Hill purchased the vacant property in December 2018 with the idea of converting it to municipal use. The borough has since sold the Hosey property to a private developer, who has proposed building an age-restricted community on the site.

Fountain Hill Borough Council president Leo Atkinson said the fact that the borough was able to resell the property for three times what it paid for it will benefit the municipality.

“We are earmarking the proceeds for a potential future upgrade or construction of borough buildings,” he said.

Fountain Hill Borough Hall and the police department were two borough facilities listed as possible recipients of the proceeds from the sale at council’s Feb. 3 meeting.

Attempts to contact Pektor for more information about his plans for the property were unsuccessful. However, preliminary sketches received by the borough show plans to demolish the existing Hosey building and construct 18 age-restricted units in its place.

Borough officials noted that the development proposal is still in its early stages, with its details subject to change. The developer will need to submit paperwork, as well as meet with the planning commission and township engineer as part of any approval process.