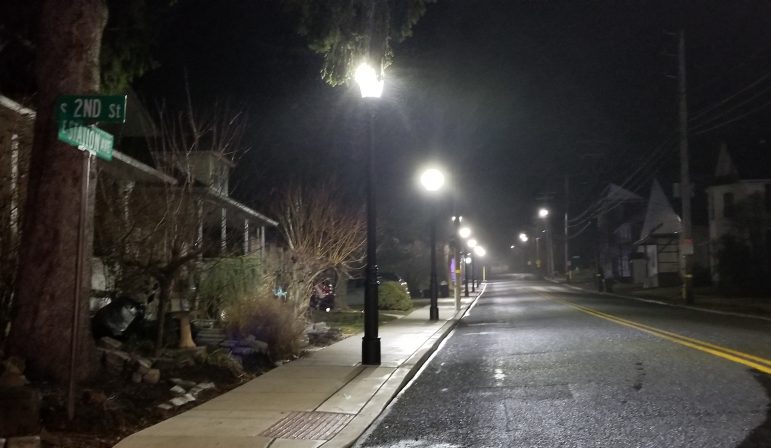 Lampposts along East Station Avenue have brightened the neighborhood a bit too much, according to residents and officials.

A Coopersburg Borough Council meeting earlier this month was an opportunity to shed some light on an issue that’s had some residents seeing red.

In response to citizen concerns about the glare, Dietz said the infrastructure committee is investigating options to reduce the lights’ brightness with help from the manufacturers. Such options may include the use of a remote control dimmer and shades.

The lamppost lighting was recently installed as part of the borough’s Streetscape Plan, which includes East Station Avenue.

In a municipal update he provided to members of the Southern Lehigh Chamber of Commerce Wednesday, Coopersburg borough manager Tim Paashaus said the $5 million streetscape project will help boost economic development, slow traffic, and improve walkability as well as accessibility along some of the borough’s main corridors.

“It’s pretty but it’s very bright,” he acknowledged with reference to the new lampposts.

In response to a plethora of questions by residents about the new lighting the borough has published an FAQ on its website, which Paashaus also shared as part of a handout for attendees of the chamber breakfast, which was held at Penn State Lehigh Valley.

In addition to questioning their brightness, residents have also asked why the lights are “so close” together and why there are so many of them, according to the FAQ.

An explanation in the FAQ that was reiterated by Paashaus is that the lighting along East Station Avenue is subject to PennDOT lighting standards, because it is a PennDOT road.

There are 57 lampposts along East Station Avenue between the Saucon Rail Trail crossing and Horse Alley, the FAQ indicates.

“As it turns out they set the installed luminosity at 130 percent of that required with the understanding that over time the lights will get dirty and eventually be dimmer, meeting their target luminosity of 100 percent,” it says. “The borough is currently exploring, with the manufacturer, the possibility and cost of dimming them to the 100 percent and then turning it back to the 130 percent (setting) at the appropriate time.”

Paashaus commented that the lights are so bright that at least one resident of the area has purchased room-darkening shades to keep the glare out of his house.

During the next phase of the streetscape project the same type of lighting will be installed along Main Street from Fairmount Street to Locust Valley Road, however Dietz assured council that the lighting work there won’t proceed “until we know what works.”

The council meets every third Tuesday of the month. They will have their monthly workshop meeting Monday, March 2 at 7 p.m. at Coopersburg Borough Hall, 5 N. Main St., Coopersburg.

Meetings are open to the public. For more information regarding council meetings and other borough news, visit the borough’s website and follow the borough on Facebook.