County officials said in a news release that the two most recent deaths involved “elderly people (who were) in fragile health before catching the virus.”

“One, a woman in her 90s, had severe and longstanding pulmonary issues,” the news release said. “The other, a man in his 80s, also had chronic underlying conditions.”

A man in his 60s who had underlying health conditions who died Saturday became the county’s first coronavirus fatality since the outbreak began nearly a month ago.

Damsker, who was cited in the news release, said 11 were in stable condition and seven were on ventilators in critical condition.

The county’s case total as of Sunday stood at more than 200, and Damsker said that number is likely “a gross underestimation of the number of residents who actually have the virus,” the news release noted.

“(Damsker) continued to urge anyone who experiences the milder common symptoms of COVID-19–runny nose, cough, fever and especially loss of taste and smell–to ‘assume you have it, stay at home and treat your family members accordingly’ by keeping them at home and isolated from any family members with underlying health conditions,” the news release said.

According to Damsker, there is no immediate need for anyone not employed in an essential job who experiences only mild symptoms to get tested, given the ongoing shortage of tests and busy emergency rooms.

Despite the rising number of cases, Damsker said in the news release that he is encouraged by the apparent lack of community spread in most of them.

“Only one or two of the new cases could not be traced to a likely source of infection, such as travel to New York or contact with someone known to be infected already,” the news release noted.

Community spread of the disease has been confirmed by infectious disease experts in the Lehigh Valley, as well as in Monroe County in the Poconos, which St. Luke’s University Health Network officials labeled a “hot zone” for the spread in a news conference Sunday.

Lehigh Valley Live reported that the county’s ties and proximity to New York City–which with approximately 34,000 cases and nearly 800 deaths is now considered the epicenter of the pandemic in the United States–were cited as reasons for the increase in the number of cases in Monroe County.

Statewide as of Sunday, nearly 4,000 Pennsylvanians had tested positive for COVID-19, according to Health Secretary Dr. Rachel Levine, who announced that the state’s death total from the disease had risen to 38.

Levine said that to date 316 Pennsylvanians had been hospitalized for COVID-19, with 110 of them requiring ICU treatment.

Residents of 39 Bucks County municipalities have tested positive for the virus, the news release said. A majority of the municipalities that haven’t yet reported cases are located in Upper Bucks, however the release noted that Tinicum Township and Dublin borough in the northern part of the county reported their first coronavirus cases over the weekend. 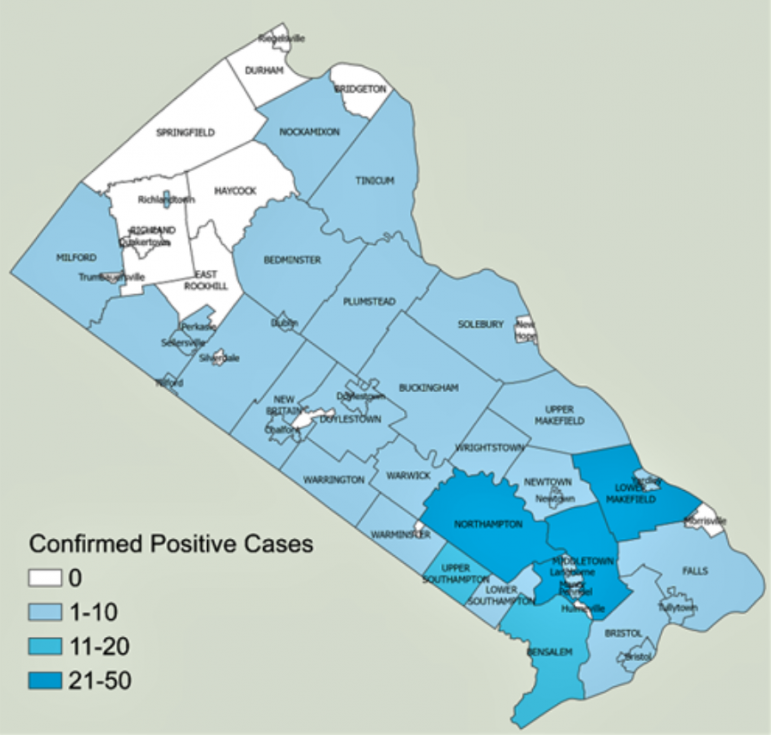 The greatest concentration of coronavirus cases is currently in lower Bucks County, however more cases continue to be reported in Upper Bucks, with Tinicum Township and Dublin borough reporting their first cases to officials over the weekend.