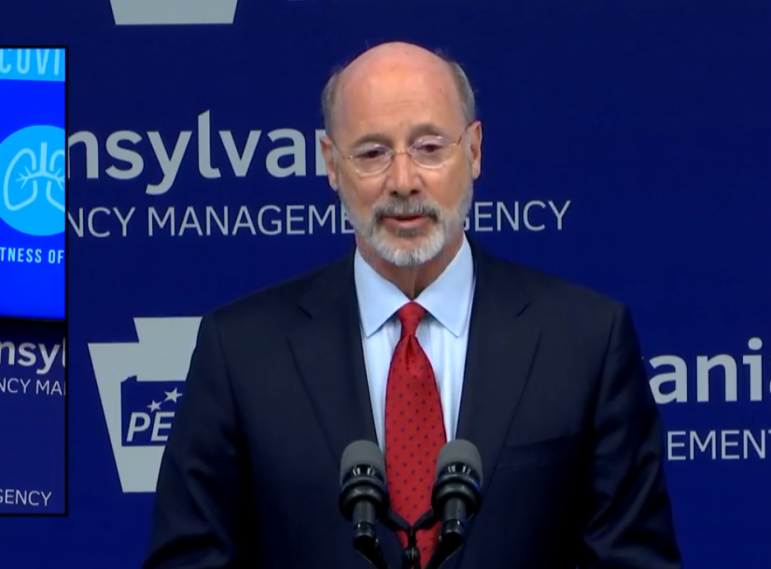 Pennsylvania governor Tom Wolf addresses the ongoing coronavirus pandemic in an update that was livestreamed from Harrisburg Monday.

In a 2 p.m. news conference, Gov. Tom Wolf said a stay-at-home order he’s implemented in phases for many of the state’s 67 counties is being further expanded and will now be in place until at least April 30.

“This virus is now in 59 of our 67 counties, and the number of cases continues to grow each day,” he said.

Wolf announced that he was adding Carbon, Cumberland, Dauphin and Schuylkill counties to the stay-at-home order, effective as of 8 p.m. Monday, and said he will continue to assess the list of counties that are under the order and add to it “based on where and how new cases are occurring.”

The order–which has been in effect in Northampton and Lehigh counties since Wednesday–was set to expire April 6 for all counties where it has been implemented.

Wolf said extending the order to April 30 was a decision that is “in line with what the president is doing at the national level.”

Under the order, residents are only permitted to leave home for essential employment, grocery shopping, to buy medicine, to care for a relative or pet in another residence and/or for a number of other reasons that are classified by the state as “life-sustaining.”

“Freedom of travel remains, but please refrain from non-essential travel,” the Pennsylvania Department of Health says on its website. “Essential travel includes things like commuting to an essential job, picking up supplies like groceries and medicine and checking on family and pets in other households.”

During the news conference, Wolf also announced that K-12 schools throughout the state–which were closed due to the pandemic two weeks ago–will now be closed until further notice. The school closure had previously been extended until April 6, but Wolf said at this point they will simply be closed until it is safe for them to reopen.

The Department of Health also reported that an additional 10 people have died from COVID-19, bringing the statewide death total to 48.

Individuals over the age of 65 and those with underlying health conditions are most at risk for developing complications from the disease, such as a life-threatening form of pneumonia.

Video of Monday’s livestreamed news conference is below.