Although the spread of the novel coronavirus (COVID-19) is of concern across the entire state of Pennsylvania, growth both in the number of confirmed cases and in the total number of deaths across four counties that form a rough semi-circle in east central and northeastern Pennsylvania is of particular concern, a state health official said Monday.

Lehigh, Northampton, Monroe and Luzerne counties together had reported 3,143 confirmed cases of the virus as of Monday, which represents nearly 25 percent of the total number of confirmed cases statewide. That figure stood at 12,980 on Monday.

Philadelphia also has approximately 25 percent of the confirmed cases, with 3,611 as of Monday.

However, the four “collar counties” around it that were part of the initial epicenter of the outbreak in Pennsylvania–Bucks, Montgomery, Chester and Delaware–now have considerably fewer cases, proportionally, than their neighbors to the north and south. As of Monday, the total number of cases in the suburban counties was 2,463.

A comparison of the death totals for the three areas highlighted above is as follows. As of Monday there were 162 deaths attributed to COVID-19 across the state.

What could be causing the relatively high ratio of confirmed cases as well as deaths in the east central and northeastern counties is unclear, however in a question posed to state health secretary Dr. Rachel Levine by the Morning Call at a news conference Monday afternoon, the counties’ ties to New York City and the fact that they are home to many “high density warehouses” were floated as possible theories.

“We’re not exactly sure why the Northeast has become an area of concern. As you’ve pointed out we have seen an increase in the number of cases in the Northeast of Pennsylvania,” Levine responded. “So we’ll be looking at that data closely, considering all the different possibilities of why there might be increases there.”

“Of course we have widespread community transmission–or sometimes called community spread–everywhere in Pennsylvania, but that does seem to be a significant area of concern and we’ll be looking at that, working with local authorities and local health systems in that area,” she added.

Gov. Tom Wolf said he is not considering a request by a local official to send the National Guard to parts of Luzerne County, where the spread of the coronavirus prompted the mayor Hazleton to enact a curfew over the weekend. 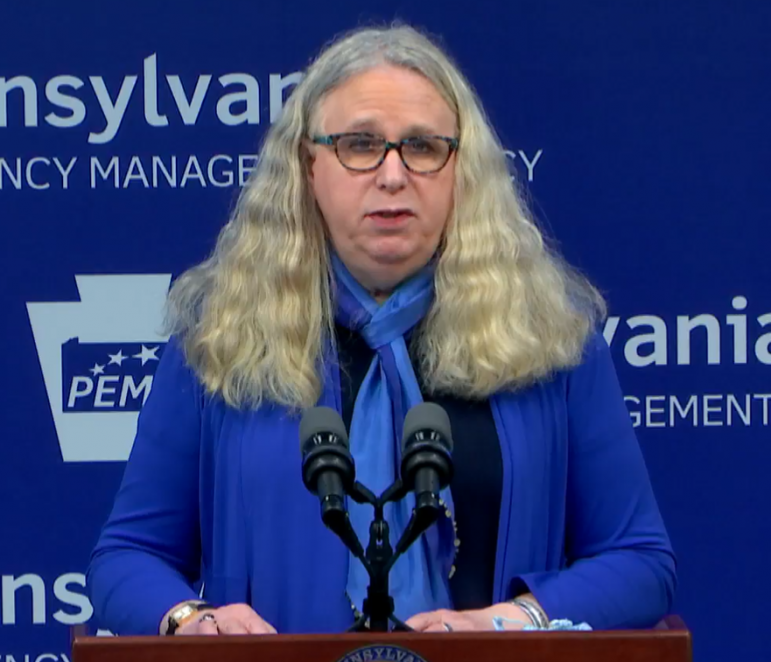 Pennsylvania Secretary o Health Dr. Rachel Levine said a four-county area in east central and northeastern Pennsylvania that has seen exponential growth in the number of confirmed cases of coronavirus is an area of concern for the state.

Responding to a question about whether case numbers by municipality could be shared by the state to help county leaders better direct resources to where they are most needed and discover “potential hot zones” for the virus, Levine said her department is currently “in active discussions about that” and hopes to “have a solution that balances all of the needs this week.”

Under a 1955 state law called the Disease Prevention and Control Law, only aggregate health department data is permitted to be released, according to a recent story published on PennLive.com. The story suggests that the obscure law’s requirement is related to the tracking of venereal diseases like syphilis, which carried more of a stigma in the 1950s.

As of Monday, only two Pennsylvania counties–Elk and Jefferson–had yet to report a single case of the virus, according to Department of Health data.

The entire state of Pennsylvania is under a stay-at-home order that was first implemented in the Philadelphia area March 23. It was expanded to include the Lehigh Valley March 25, and eventually on April 1 was extended to include all 67 counties. Under the order–which is in effect through April 30–residents are only permitted to leave home for certain reasons, such as buying food or caring for a loved one in another residence.

Some good news shared by state officials is that the health care system–including the number of beds available in hospital intensive care units and the number of ventilators available for COVID-19 patients who might need them–is not close to being at capacity.

For more updates and news about the coronavirus pandemic in Pennsylvania, follow Gov. Wolf on Twitter and visit the Department of Health website, which is updated with new data daily.

Below is the video from Monday’s news briefing at which Levine and Wolf both spoke.