In a data update shared Tuesday, the Pennsylvania Department of Health reported another drop in the total number of newly-confirmed cases of the novel coronavirus (COVID-19), however the state’s daily death total from the disease spiked.

The total number of confirmed cases in Pennsylvania as of Tuesday stood at 25,345, and 584 residents had died from COVID-19, the Department of Health reported.

“It is important to remember that there is a lag time in reporting of deaths over the weekend, and that is part of the reason for the increase in numbers today,” state Sec. of Health Dr. Rachel Levine said at a 2 p.m. press briefing.

She said approximately 10 percent of the total number of people who’ve been diagnosed with COVID-19 have been hospitalized; a percentage that has remained consistent throughout the pandemic. As of Tuesday, Levine said a total of 666 coronavirus patients had required the use of ventilators to mechanically breathe for them.

Significantly, Levine said the state is “flattening the curve” with a “significant decrease in terms of the number of new cases that we are seeing per day, and in terms of the total number of cases, compared to that previous exponential rise.”

She also said that the total number of tests being performed by the state has decreased because of test site closings in Philadelphia and Montgomery County, where she said the state will be reopening a testing site. It also plans to open a testing site in northeastern Pennsylvania, where four counties–Lehigh, Northampton, Monroe and Luzerne–have maintained relatively high caseloads as well as mortality rates throughout the pandemic.

Levine added that the state’s total caseload is being watched very closely by both the Department of Health and Gov. Tom Wolf, as they begin to plan future decisions about reopening businesses and other pre-pandemic components of daily life, region by region.

She said she was unable to provide some data that has been requested regarding the race and ethnicity of COVID-19 patients because in approximately 60 percent of cases, the labs that have been conducting the tests have not provided that information to the state.

The Department of Health has reminded testing sites that they are obligated to include that information along with other demographic data in the reports they submit, per Levine.

The statewide increase in the number of new cases reported Tuesday represented a percentage increase of roughly 4.7 percent, which is the lowest daily increase since the state began providing daily updates on the total number of cases more than a month ago.

In responding to a question about the relatively large number of cases of COVID-19 in nursing homes in Lehigh County, Levine said the caseload could be the result of “significant community spread” of the disease in the Lehigh Valley.

“Whenever we’re seeing community spread, then we expect to see these type of challenges in long-term care living facilities,” she said. “Of course, people have to go back and forth. So they don’t have visitors coming in, but staff go in and out…in terms of taking care of patients, but also cleaning the facility and food care workers, etc. And that type of community spread could be introduced in the long-term care living facility and then it could spread there.”

“It’s a very vulnerable population,” she added. “We’re taking every precaution that we possibly can to protect them.”

The entire state of Pennsylvania remains under a stay-at-home order until at least April 30, with most businesses and all schools closed to help stop the virus’s spread. Wolf and Levine continue to urge residents to stay home unless they absolutely must go to work at an essential business or perform a “life-sustaining” task such as buying food or picking up medication. Most parks and trails are open, and Pennsylvanians are permitted to enjoy visits to them as long as they follow recommended social distancing requirements. 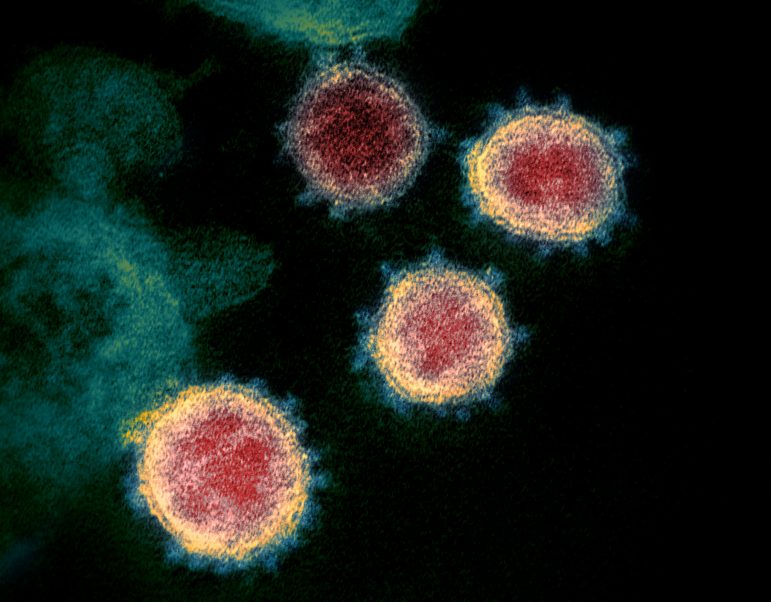 A microscopic view of the SARS-CoV-2 virus, which is also known as COVID-19 and colloquially as the novel coronavirus.