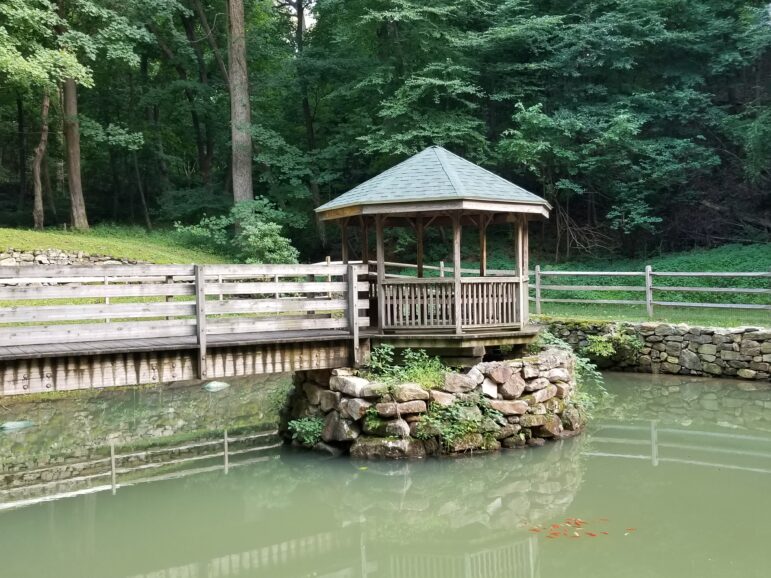 The centerpiece of the small park is a reconstructed gazebo at the center of a walled, spring-fed pond. A different gazebo and footbridge existed during the heyday of Lechauweki Springs as a Victorian-era resort, which was in the late 1870s.

Perched on the north slope of South Mountain on the edge of Fountain Hill is a small park with a rather long name: Lechauweki Springs.

The park’s name comes from the natural springs that emerge above and within it; sources of mineral-rich water that attracted investors to the area in the late 19th century, when Americans began to frequent facilities that offered “water cures” for all that ailed them.

Informational signage in the park details the history of the summer resort that opened atop a section of the springs in 1873. 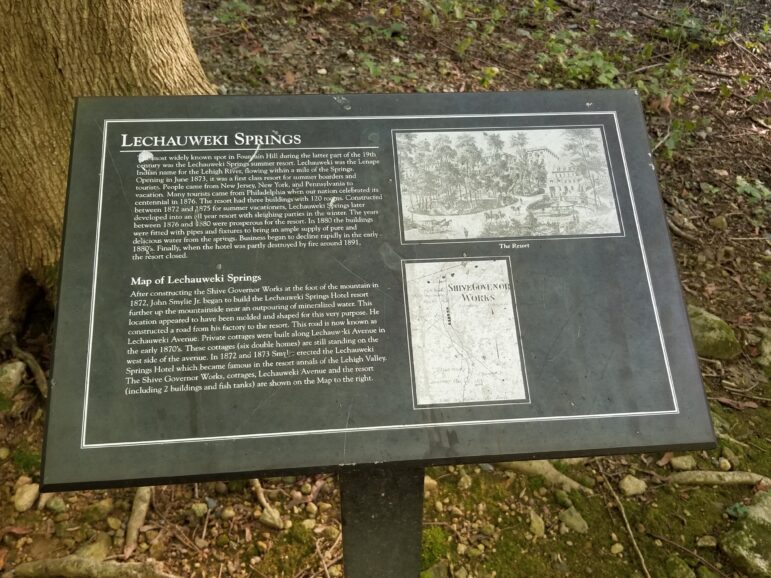 Informational signage recalls the brief history of Lechauweki Springs as a Victorian-era resort.

“It was a first class resort for summer boarders and tourists,” according to the historical record provided at the park. “People came from New Jersey, New York and Pennsylvania to vacation.”

The main attraction, of course, was the water from the springs.

Guests were advised to drink “a wine-glassful before each meal and on retiring for the night” as a digestive aid.

The Lechauweki Springs resort was composed of three buildings that included a total of 120 guest rooms; rooms that were later retrofitted with plumbing in order to supply guests with an ample in-room supply of the highly-prized, mineralized spring water.

The heyday for the springs as a travel destination was in the late 1870s, and it was brief. 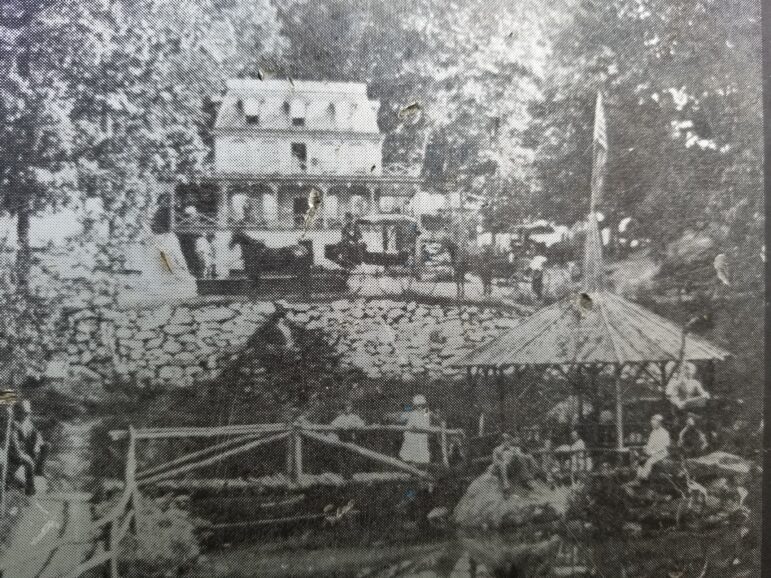 A rare photograph of the resort shows travelers arriving at it via horse and buggy. Three buildings featuring 120 guest rooms were constructed at Lechauweki Springs in the early 1870s. In the foreground is the resort’s fish pond, with Adirondack-style footbridge and gazebo that provided a romantic spot from which hotel guests could admire the beauty of their surroundings.

According to the park’s signs, by the early 1880s interest in vacationing there began to wane, and after part of the hotel was destroyed by fire in 1891 the resort closed forever.

Today all that remains of the buildings are portions of their foundations. At the center of  the park is a walled, spring-fed pond with a small gazebo–accessible via a footbridge–both of which were reconstructed when the park was developed in the early 1990s.

Another attraction is a cavernous cold cellar–built into the mountainside–which was used to store provisions used by the hotel’s kitchen. According to the informational signs in the park, the menu at Lechauweki Springs was both gourmet and highly-rated in its day.

In addition to the hotel, the springs also lent their name to the street that leads to the park–Lechauweki Avenue–along which are a handful of homes which date from that era.

The homes were built by John Smylie Jr., an early industrialist who was instrumental in building the hotel, as private cottages for workers in his nearby factory.

The word “Lechauweki” itself is from the Lenape language, and was the Native Americans’ name for the Lehigh River.

Today, Lechauweki Springs Park is a peaceful retreat from the hustle and bustle of nearby Fountain Hill and Bethlehem, in which tall trees form a lush canopy that can lower the air temperature by as much as 5 degrees on a hot summer’s day.

Like all borough parks, Lechauweki Springs is open from dawn til dusk. Parking is available on the street at the entrance to the park.

More information can be found on the Borough of Fountain Hill website. 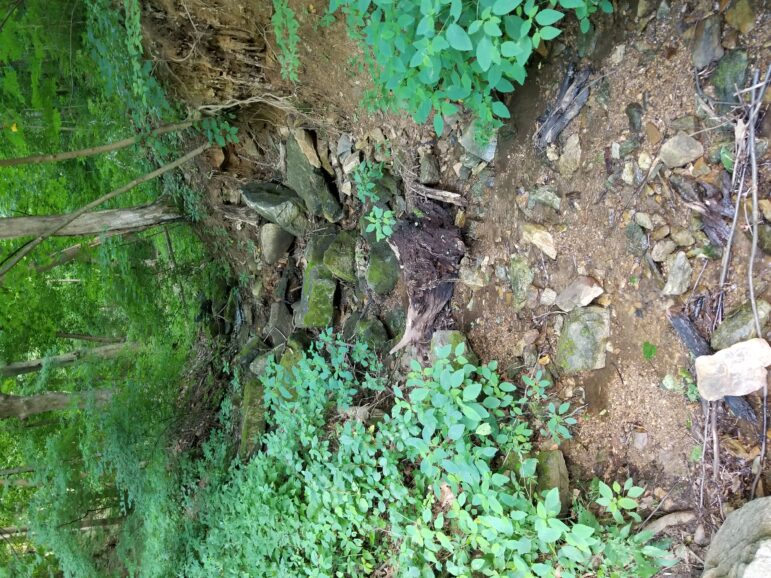 The “mineralized” spring water that made Lechauweki Springs famous emerges from the side of South Mountain at a temperature of 50 degrees Fahrenheit. 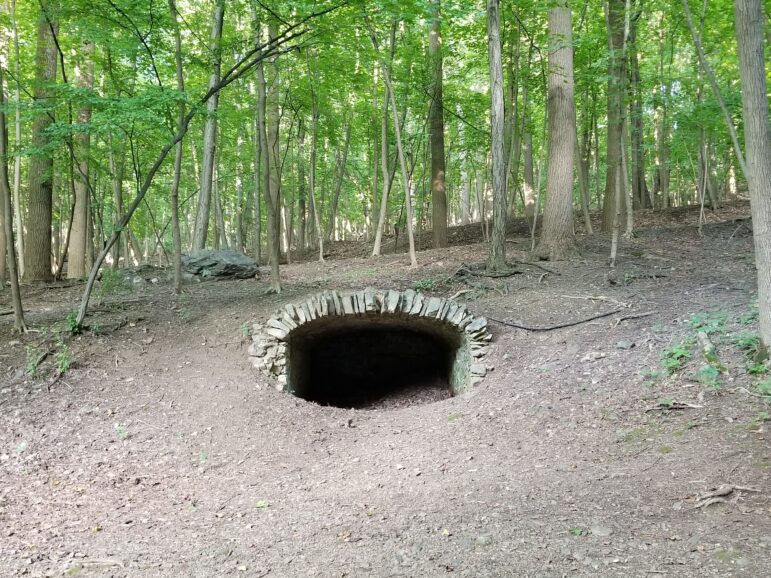 What looks like a cave was actually a cold cellar used by the hotel’s kitchen to store provisions. 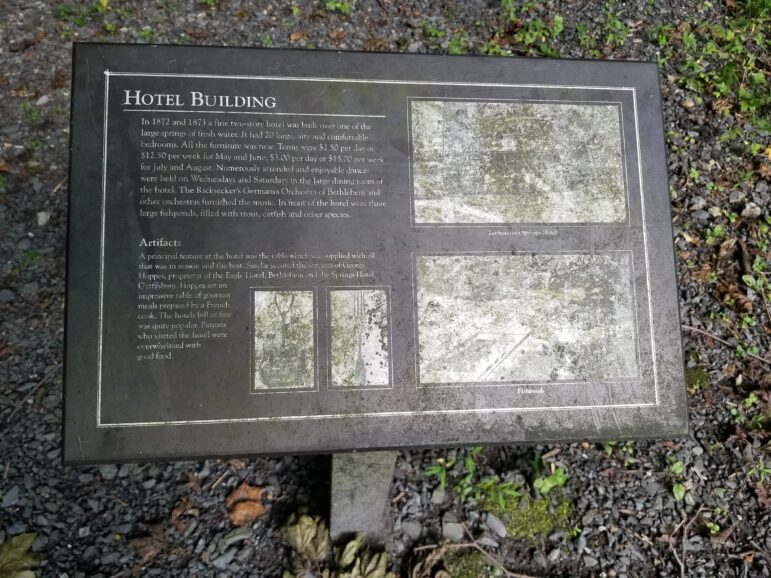 Some of the informational signs have deteriorated since they were installed in the early 1990s, when the borough of Fountain Hill developed Lechauweki Springs Park. 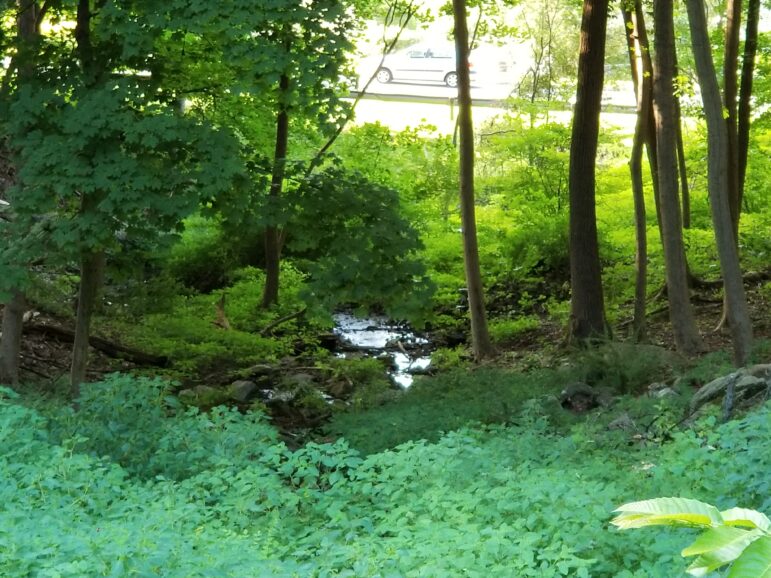 The water from the springs flows out of the park and underneath Moravia Street. 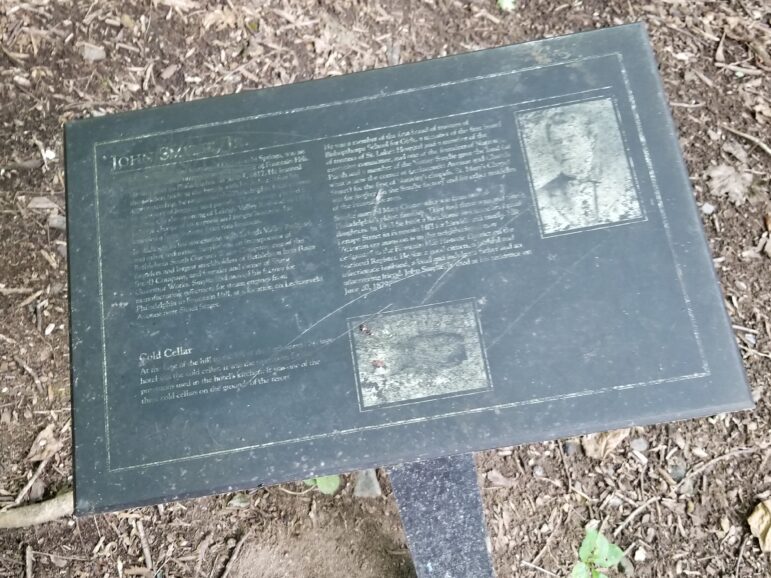 John Smylie Jr. was an early industrialist, a developer of Lechauweki Springs and a “founding father” of the area that became Fountain Hill. 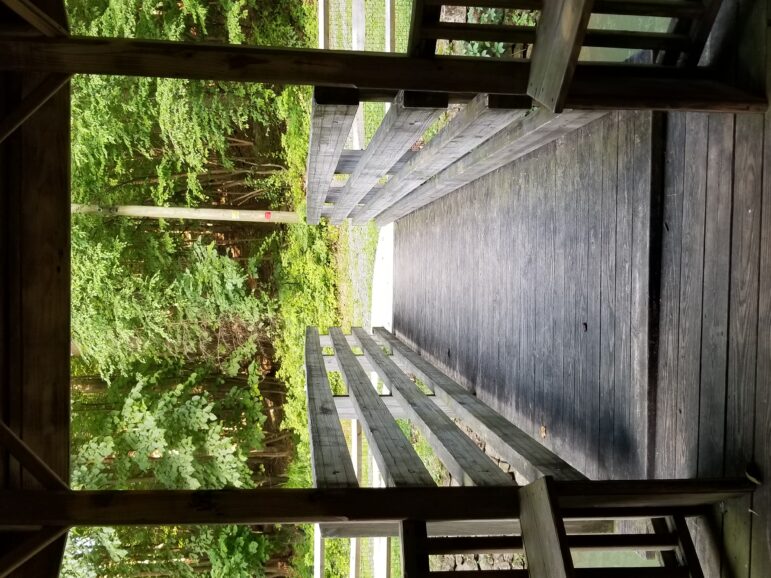 Today the reconstructed footbridge and gazebo provide a peaceful retreat for park visitors. 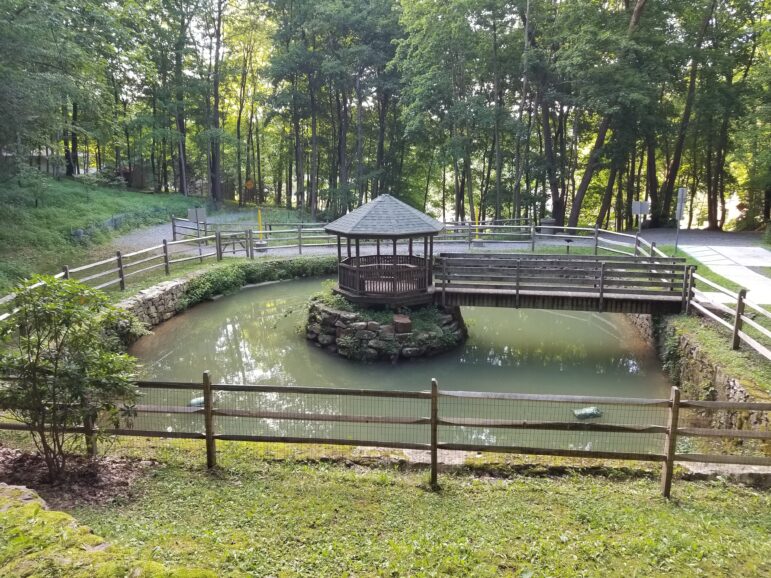 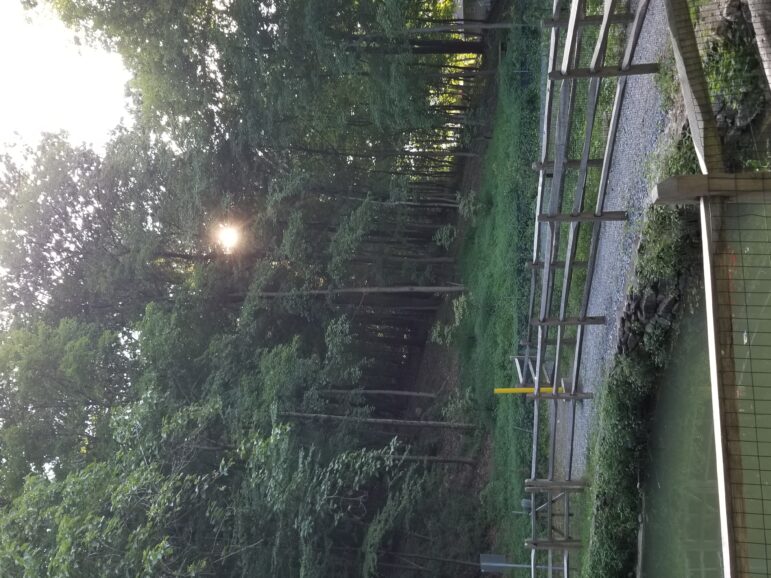 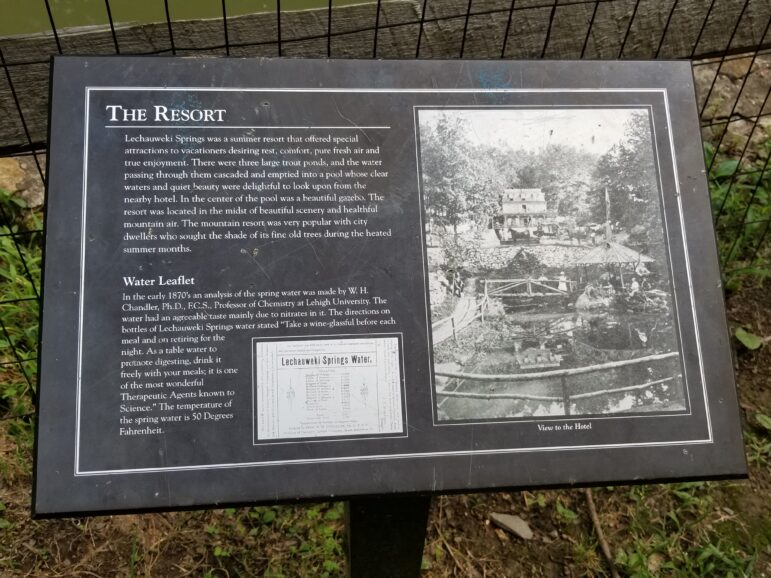 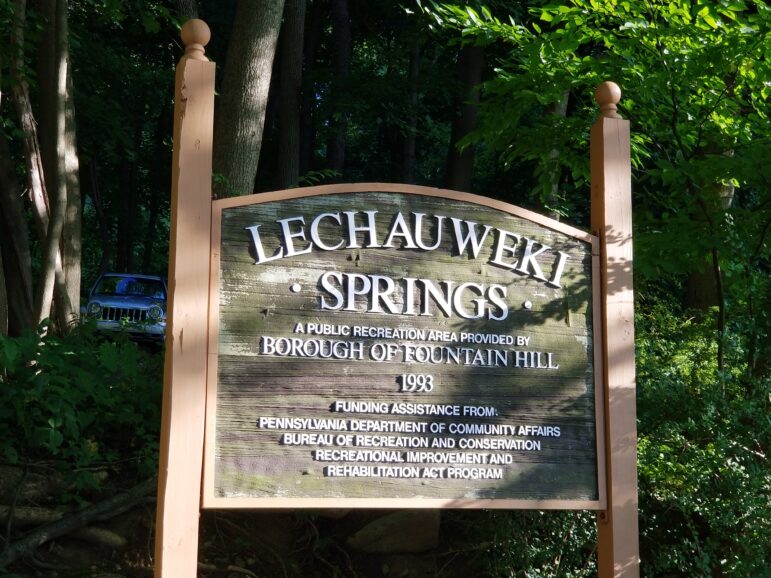