Holum’s new role is the latest development in his basketball career, which got its start right here in Hellertown. Holum was a grade-school student at the former St. Theresa’s  before attending Saucon Valley, where he was a stand-out baseball and basketball player.

As a guard/forward for the Panthers in the late 1990s and early 2000s, Holum led the boys basketball team to three straight Colonial League titles and two PIAA state tournament appearances. The Panthers’ 27-3 record his senior year remains a record today, as does his 1,643 career points. 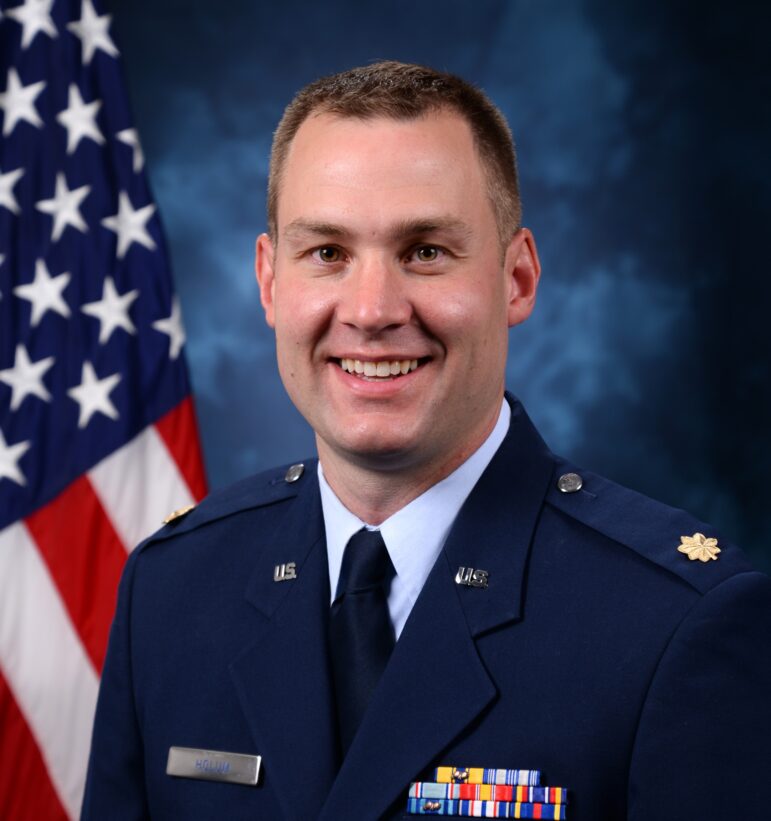 Hellertown native Marc Holum was recently named the assistant coach of the U.S. Air Force Academy men’s basketball team. He currently serves as a major in the Air Force reserves and resides in Colorado Springs, where the academy is located.

Holum credits his older brother Dean for lighting a competitive fire in him from an early age.

“Growing up, he would always make me play with his friends,” Holum said.

“From a young age I was playing against guys who were bigger and stronger than me,” he continued. “So that really helped, I think, with my development.”

Holum’s father served during the Vietnam War, and from a young age he had been exposed to groups like the American Legion. Holum, however, hadn’t considered serving in the military until he started being recruited to play basketball by West Point and the Air Force. He then began looking into what it meant to be an officer in the military.

“I had the opportunity to get into the Air Force Academy, and they recruited me for basketball,” Holum said. “It just seemed like a great opportunity for a great college education and a chance to play basketball at the highest level.”

Upon arriving in Colorado Springs to begin his college career, Holum decided to enroll at the Air Force Academy Prep School. The prep school is a 10-month program that affords underclassmen the opportunity to develop themselves academically and athletically before enrolling in the Air Force Academy.

“It’s a great program, and a lot of people aren’t even aware of it,” Holum said. “It’s for students who are great candidates for the academy, but academically they may not be quite ready.”

Following the completion of his prep school program, Holum enrolled in the Air Force Academy, where he majored in social science. He also enjoyed a successful playing career on the USAFA men’s basketball team. Following the first 20 or so games of his freshman year, Holum played in nearly every game when he wasn’t injured.

The highlight of his college career came in his senior year. As a co-captain of the USAFA 2005-06 team, Holum’s squad finished with a 24-7 record, which remains a school record to this day. That team also qualified for the NCAA Men’s Basketball Tournament.

“We played Illinois in the NCAA Tournament. It was a good game,” Holum said.

Holum graduated from the academy later that year and began his active duty service for the Air Force.

“Following graduation I was stationed out in California where I was going through training for the Air Force to work with space and missiles,” Holum said.

He then received an offer to return to the prep school as an instructor and begin his coaching career as the head coach of the prep school’s team. He remained in that position for the next 13 years, as he finished out his active duty requirements for the Air Force. Holum remains in the Air Force reserves today, where he serves as a major.

An exciting development happened in April of this year, when Holum’s former USAFA head coach, Joe Scott, returned to the academy to reclaim the role of head coach. After staying in contact with Coach Scott throughout the summer, and going through an interview process, Holum was named the assistant coach of the USAFA men’s team in August. 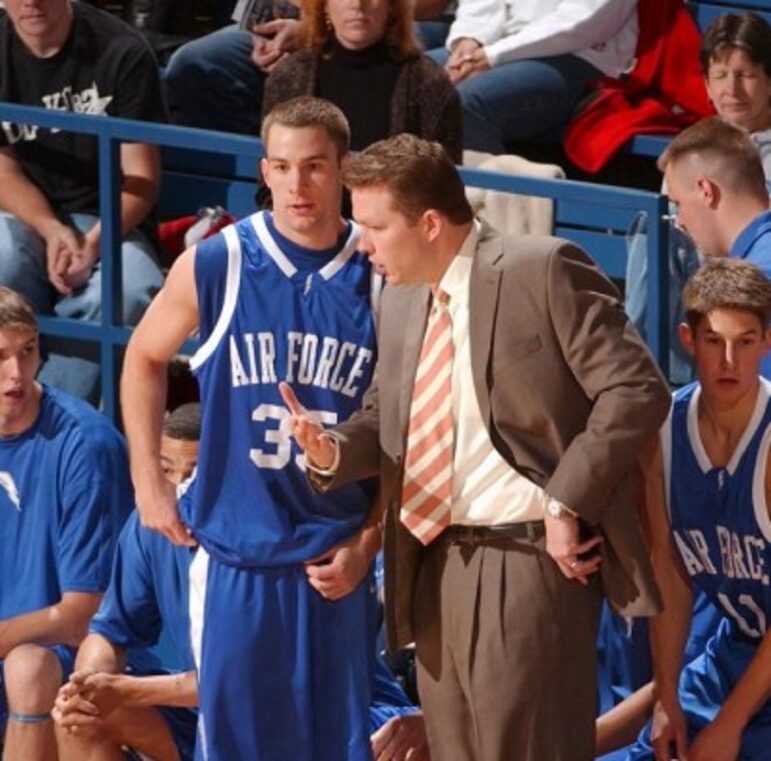 Holum’s (left) college career was capped by a 24-7 senior season, which earned his team a spot in the NCAA Basketball Tournament. Holum was the co-captain of that team.

Holum is excited to work alongside his former coach, and he plans on bringing the same passion and effort that helped his senior year team achieve that 24-7 record.

“We’re coming in here and trying to re-energize the program to get it back to where we were when I was playing,” he said. “There’s definitely a lot of talent here, and we’re excited to coach these guys.”

Holum feels comfortable in the role, especially since he had already coached a majority of the players while he was still serving as the head coach of the prep school team.

“Fifteen of the 21 players on the roster went through the prep school, so I’ve already coached a good chunk of the guys,” he said.

Much like the rest of society, the USAFA men’s team has been affected by the COVID-19 pandemic. Holum said the program was prevented from doing full-team workouts in the beginning of the training season.

“Initially we could only work with so many guys at once,” Holum said. “COVID is definitely still a factor, and we’re still trying to figure out what’s going to happen for the upcoming season.”

Holum resides in Colorado Springs with his partner, Kelly Krc, and their children, Cody and Hailey. In non-COVID years, Holum returns to Hellertown regularly, as much of his family still resides in the area.

This year, however, expect Holum to spend time getting ready for the upcoming season and playing with his kids.

“I’m doing the best I can to expose them to athletics,” he joked. “I’m trying to get them out there.”