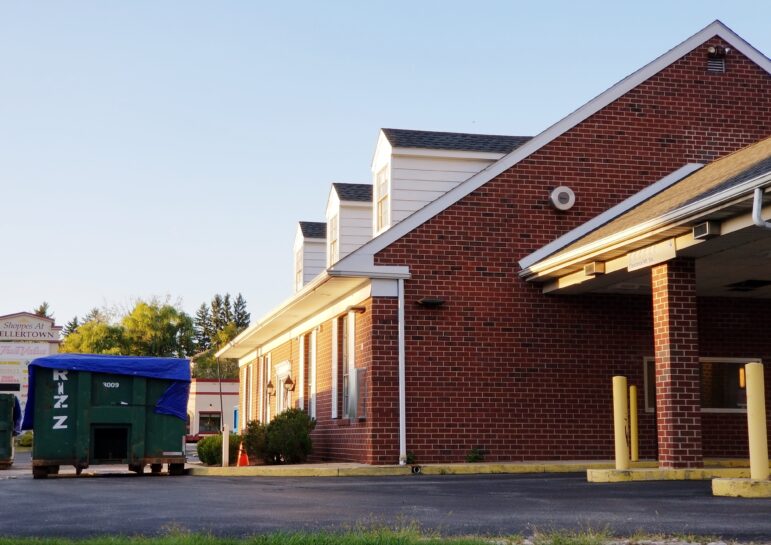 Some work is under way on the Starbucks that is planned for opening in the former Bank of America building at 5 Main Street in Hellertown, a borough official confirmed Friday.

If you were hoping to sip a pumpkin spice latte at a new Starbucks in Hellertown this fall, you’re going to have to postpone those plans, but the good news is that work on the new location is finally under way.

The popular coffeehouse first announced that it will occupy the former Bank of America building at Main Street and Polk Valley Road back in February.

No timeline for an opening was given at that time, and a company spokesperson this week declined to provide specific information about when the new location will open.

“Starbucks is always looking for great locations to better meet the needs of our customers,” the spokesperson said Thursday. “We are happy to confirm that we will be opening a new location…in Hellertown, Pa.”

Hellertown zoning and codes enforcement officer Kris Russo confirmed Friday that removal of the former bank vault and “some minor demo work to the interior portion of the building” are currently under way.

A large dumpster is currently being used at the site, which is within the parking lot for the Shoppes at Hellertown shopping center.

Russo said representatives for Starbucks will appear before the Hellertown Planning Commission later this month to address concerns raised in May about traffic flow around the building, which will have a drive-thru service window for busy commuters.

“It took months to coordinate with PennDOT and do traffic counts,” Russo noted.

The company representative for Starbucks confirmed that the new location will employ 25 “partners,” which is what the company calls its employees.

A nearby Starbucks kiosk inside the Giant store on Rt. 412 in Lower Saucon Township will remain open after the Starbucks-operated location in Hellertown opens. The Giant Starbucks is a licensed retailer, as opposed to being a company-operated location; offers a limited menu; and employs Giant staff.

Another Starbucks that is company-operated is located in the Promenade Shops at Saucon Valley in Center Valley.