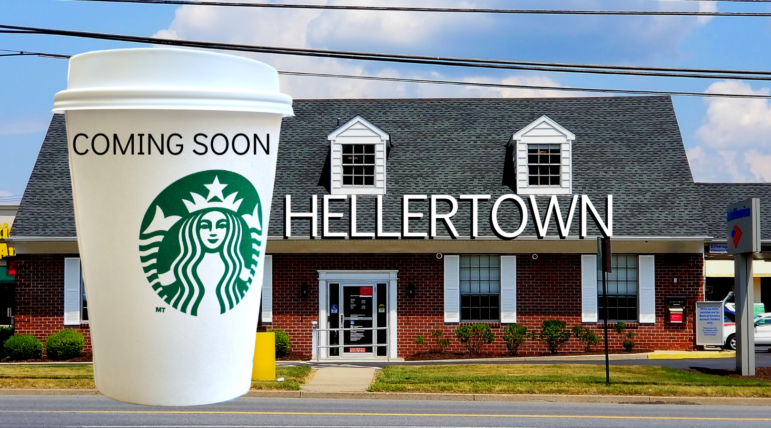 A Starbucks will open in the former Bank of America branch at Polk Valley Road and Main Street, it was announced Monday.

If you’re a fan of Starbucks and live in Hellertown, you soon won’t have as far to travel to get your coffee fix.

Realtors for the Shoppes at Hellertown shopping center announced in marketing literature Monday that the popular chain will open “soon” in the former Bank of America building at the corner of Polk Valley Road and Main Street, confirming a rumor that has circulated locally since at least last summer.

The bank branch closed in the summer of 2018, and the one-story building–which dates from the 1970s–has been vacant since then.

Although the building is equipped with a drive-thru, it’s not known if the new Starbucks will utilize that.

Similarly, it remains unclear if or how the opening of the standalone Starbucks might affect a Starbucks kiosk located inside the Giant shopping center on Leithsville Road in Lower Saucon Township, which is about a quarter of a mile away.

KW Commercial promotional materials advertising other vacancies in the shopping center include a map which shows a “proposed light” at the intersection next to the new Starbucks, however plans for the long-discussed traffic light have not been revisited since Hellertown Borough Council voted not to support a plan to install a light at that intersection in September 2013.

At a borough council meeting held last week, council voted to spend approximately $10,000 to fund the installation of a PennDOT-approved left turn arrow at the Walnut Street traffic light on Main Street. The new arrow will be for northbound traffic turning left (west) onto Walnut, and will be installed later this year.

The next nearest freestanding Starbucks locations are in the Promenade Shops at Saucon Valley in Center Valley and on E. Third Street in South Bethlehem.

Note: This is a developing local business story. It will be updated as additional information becomes available.