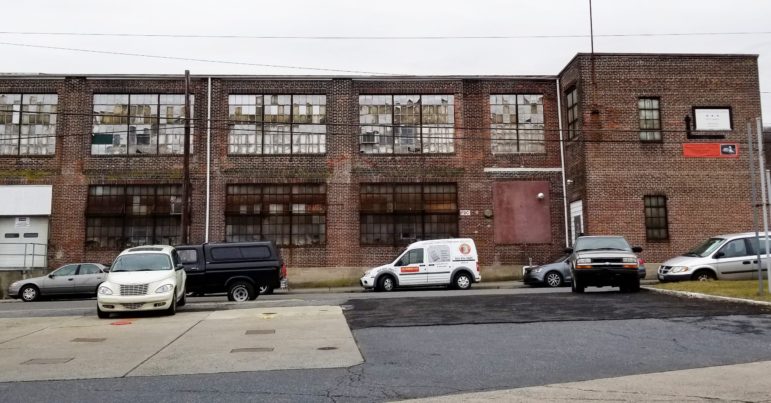 A repurposed industrial building along S. Clewell and Itaska streets (just off Broadway) in Fountain Hill borough was cited as an example of a property that could potentially benefit from the proposed facade matching grant program during council’s discussion last week. The former factory is home to numerous small businesses, but passersby have reportedly believed it to be vacant due to its appearance. Broken window panes and rusty frames are visible on the building’s north side (above).

Some dilapidated properties and businesses around Fountain Hill borough could be the recipients of makeovers soon, if a proposed facade matching grant program takes effect.

Borough Council President Leo Atkinson got the ball rolling at council’s Feb. 3 meeting with a discussion about how the program might work.

Atkinson suggested a “fairly straightforward” program which would match grants at a one-to-one funding ratio. A property owner would use the grant money to make facade improvements in order to make their location more inviting and help promote business.

Atkinson said matching grants could be made available to properties along the borough’s two main commercial corridors, which are along Broadway and Delaware Avenue.

Funding for the program would come from a new $50,000 Community Development Fund included in the borough’s 2020 budget.

Council agreed that applicants would have to submit proposals in order to be eligible for the grant program; proposals which would then be reviewed by council members.

Final details concerning how the proposals would be graded have yet to be determined.

“We are referring the details to our manager and solicitor to put together an ordinance/resolution to officially create the program,” Atkinson said in an email.

He added that he also plans to seek input from the director of the Community Action Development Corporation in Bethlehem and someone familiar with the administration of Hellertown’s facade grant program, which recently announced a new round of funding.

“I am hoping we will be having a final discussion and passing the program in March,” he said.

In addition to commercial properties, council said it will also consider opening up the facade program to participation by residential property owners in the borough’s high-traffic areas. The program’s initial focus will be on business properties, however.

If the program is ultimately enacted, Fountain Hill will become the latest local municipality to join the facade improvement program trend.

In addition to Hellertown, Bethlehem has a facade improvement program, and council members pointed out that Lehigh County also has a residential rehabilitation program.

“I think it’s a testiment to our forward-thinking council that we are discussing this program and thinking about ways we can support our locally owned small businesses,” Atkinson said. “Small business owners have long been the backbone of the community here in Fountain Hill, and assisting them in improving their businesses and properties will have a huge positive impact on our cityscape.”

“Once the program has been passed by council, I cannot wait to share the news with our business community and help them with grant proposals,” he added.