In a Crimewatch news release Sunday, the district attorney’s office said the shooting occurred at the Old Ridge Road entrance to the park, which surrounds Lake Nockamixon.

The Old Ridge Road entrance is on the south side of the lake, about three miles west of Ottsville.

The district attorney’s office said the shooting was reported at 5:16 p.m. Saturday.

“Pennsylvania State Game wardens and State Park rangers who were patrolling the park quickly responded and found an 18-year-old male from Bucks County who suffered an apparent gunshot injury,” the news release said. “First aid was performed and the subject was transported from the park to a hospital with life threatening injuries.”

“A witness reported (seeing) a male in hunting gear leaving the area,” the release added.

The district attorney’s office said police from throughout Upper Bucks County, including a K-9 unit and a state police helicopter began a search of the area but failed to locate any persons of interest.

The incident is being investigated by the detectives, state police and the Bedminster Township Police Department. 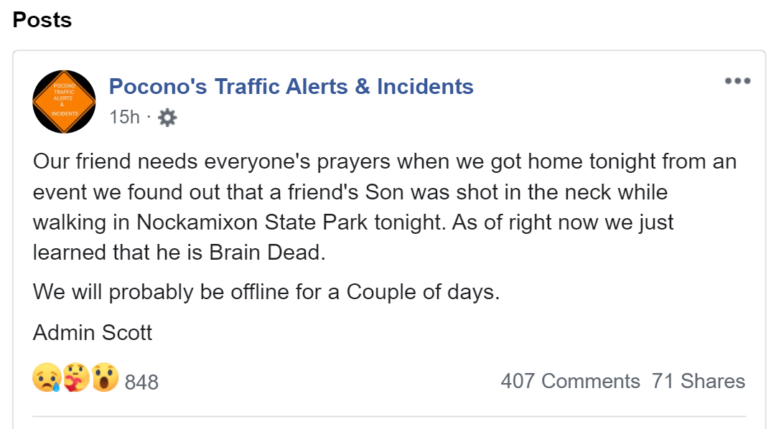 A page administrator for a Poconos breaking news page reported details about the shooting that occurred Saturday afternoon at Nockamixon State Park in Bucks County.

According to a Facebook post shared Saturday night by the news page Pocono’s Traffic Alerts & Incidents, the man who was injured was shot in the neck.

“Our friend needs everyone’s prayers when we got home tonight from an event we found out that a friend’s Son was shot in the neck while walking in Nockamixon State Park tonight,” an admin for the page named Scott posted. “As of right now we just learned that he is Brain Dead.”

Nockamixon State Park in Upper Bucks County is a popular recreation area for residents of the region. (FILE PHOTO)