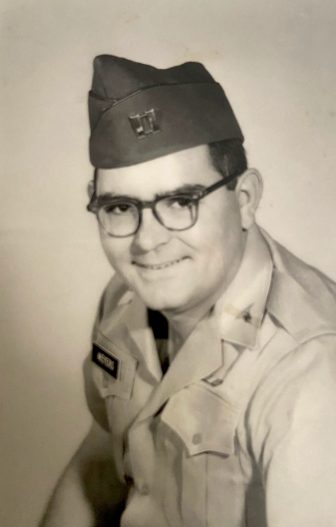 He was the husband of Norma J. Meyers. Edward was born in Fountain Hill on April 23, 1941 to the late Stanley Arnold and Margaret M. (Mansfield) Meyers. He earned two Master’s degrees from Ball State University and a BSN from Moravian College. Edward worked as a Psychiatric RN for Lehigh Valley Hospital-Muhlenberg until his retirement in 1998. Previously, he worked as an RN for Community North Hospital, Indianapolis, Ind., and KidsPeace National Hospital in Orefield. Prior to that he served for 21 years in the U.S. Army Nurse Corps, retiring at the rank of Major. He served in the United States Army from 1966 to 1984. Edward served during the Vietnam War and was called back to duty for Operation Desert Shield/Storm. He was a member of the Episcopal Church of the Mediator, Allentown, and recently of Trinity Church in Princeton, N.J.

American Legion Post #379 in Bethlehem; Watsonville Band, Watsonville, Calif.; the Naval Post Graduate School Little Theater, Monterey, Calif.; Kindsbach Kolpingskapelle (a community band in Kindsbach, Germany) while stationed during two separate tours in the former West Germany; Choir of Christ the King Episcopal/Anglican Church in Frankfurt, Germany; Choir of Episcopal Church of the Mediator; Upper Chesapeake Community Band, Rising Sun, Md. He was also active as a Scoutmaster in the Boy Scouts of America in various locations, both in the United States and in Germany.

Friends and family are invited to call from 5 to 7 p.m. Thursday, Jan. 21, 2021 at the Heintzelman Funeral Home Inc., 326 Main St., Hellertown. A funeral service will be held Friday, Jan. 22 at 10 a.m. at the funeral home. Interment with military honors will conclude services at the Union Cemetery of Hellertown. Online memorial tributes may be shared at HeintzelmanCares.com.

In lieu of flowers, contributions may be made to the Episcopal Church of the Mediator, 1620 W. Turner St., Allentown, PA 18102.