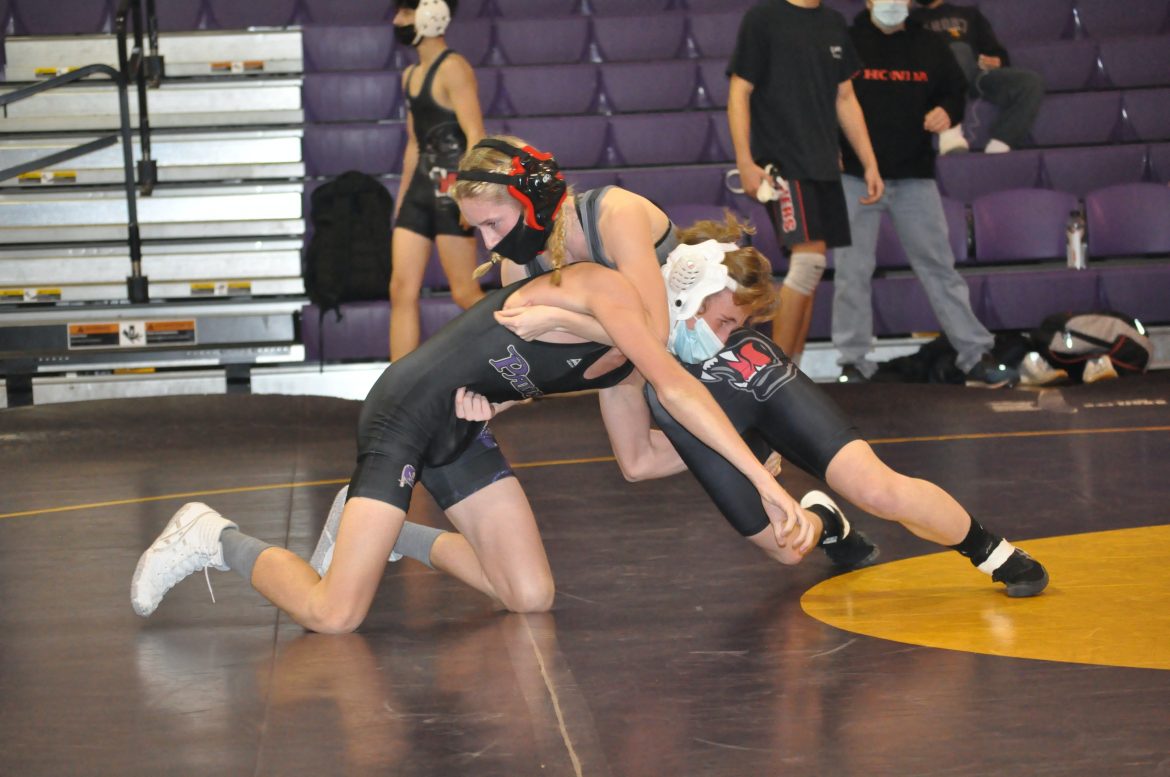 Just two nights after defeating the Southern Lehigh Spartans, Saucon Valley hit the road and travelled to Palisades for a Wednesday night fight with the Pirates.  The Panthers anxiously made the trip in what figured to be a competitive scrap in many bouts.  With a lineup that features six solid seniors, the Pirates proved to be a tough test for the Panthers.

Eleven of the thirteen weight classes were contested with two forfeits being awarded to Saucon Valley’s Connor Nicholas (126) and Mick Sullivan (285).  The Panthers won seven of the head to head matchups while registering four pins.  Sophia Riehl (113), Travis Riefenstahl (132), Mason Beckowski (138) and Tyler Pfizenmayer (215) all tallied falls for Saucon.  Riehl, Rief and Beckowski each decked their opponent in a minute or less.  It was Riehl’s first career win as a Panther wrestler.  Pfizenmayer heated up after a scoreless first period and then rolled to victory.  When Pfizenmayer got on top he stayed on top building an 8-0 lead before getting his fall. 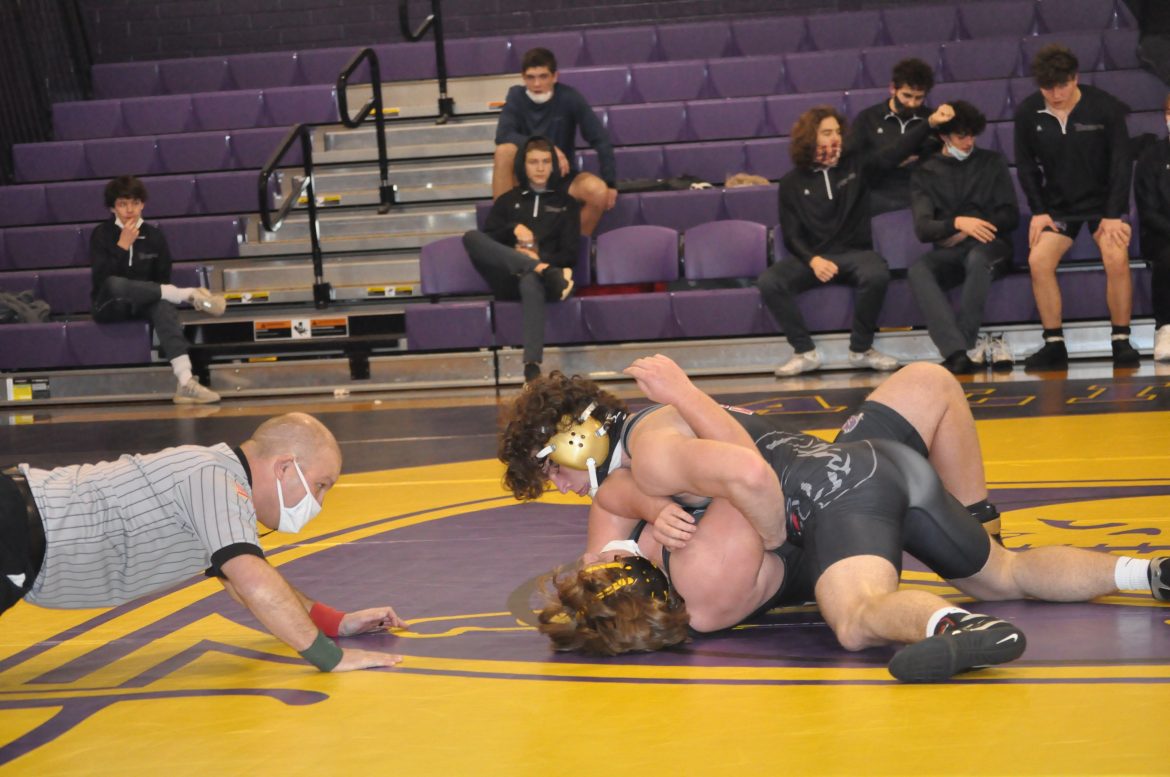 Ty Csencsits (189) was also good from the top position as he claimed victory in a bout that was just short of a barroom brawl.   Csencsits led Daniel Haubert 4-1 and then 8-2 after the first and second periods.  Csencsits did give up a couple escapes in the final period, but he also grinded for two take-downs and three near-fall points.  With seconds remaining in the third period,  Csencsits was given a rough ride out of bounds as both wrestlers stumbled off the mat and into the padded wall of the Pirate’s gym.  The scrum brought a few of Csencsits’ teammates off the bench and to their feet as they reacted with a little too much colorful language.  Csencsits kept his composure and left the mat with a 16-4 major-decision.  However, the Panthers were deducted a team point for a little too much team spirit. 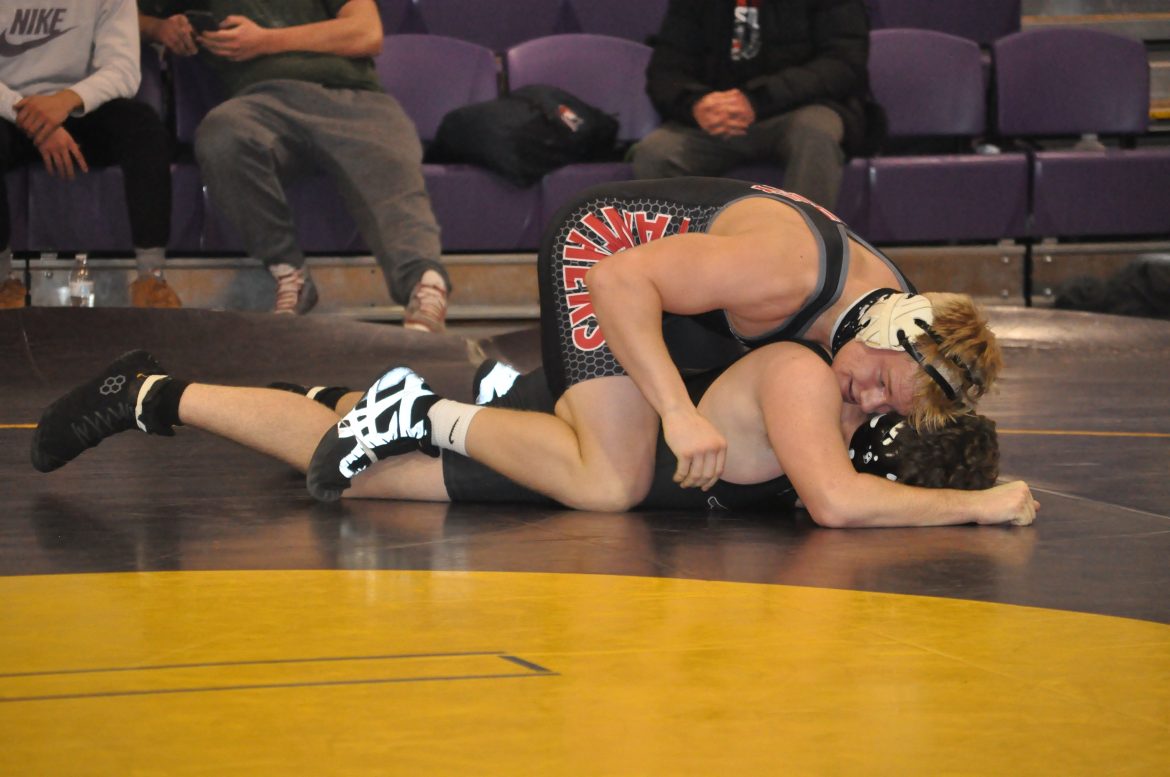 It was some rough stuff, but Ty Csencsits came out on top with a major-decision against the Palisades Pirates.

Saucon also benefitted from a couple of other hard-fought decisions from Ermal Duka (120) and Cael Markle (145).  Duka, a senior, trailed 3-2 for most of his bout.  Just before the final buzzer sounded, however, an exhausted Duka somehow willed a takedown to claim a 4-3 victory.  Markle, on the other hand, jumped out to a 5-1 lead in the first period and added an escape followed by a takedown in the third period.  For his efforts, Markle was rewarded with an 8-3 decision. 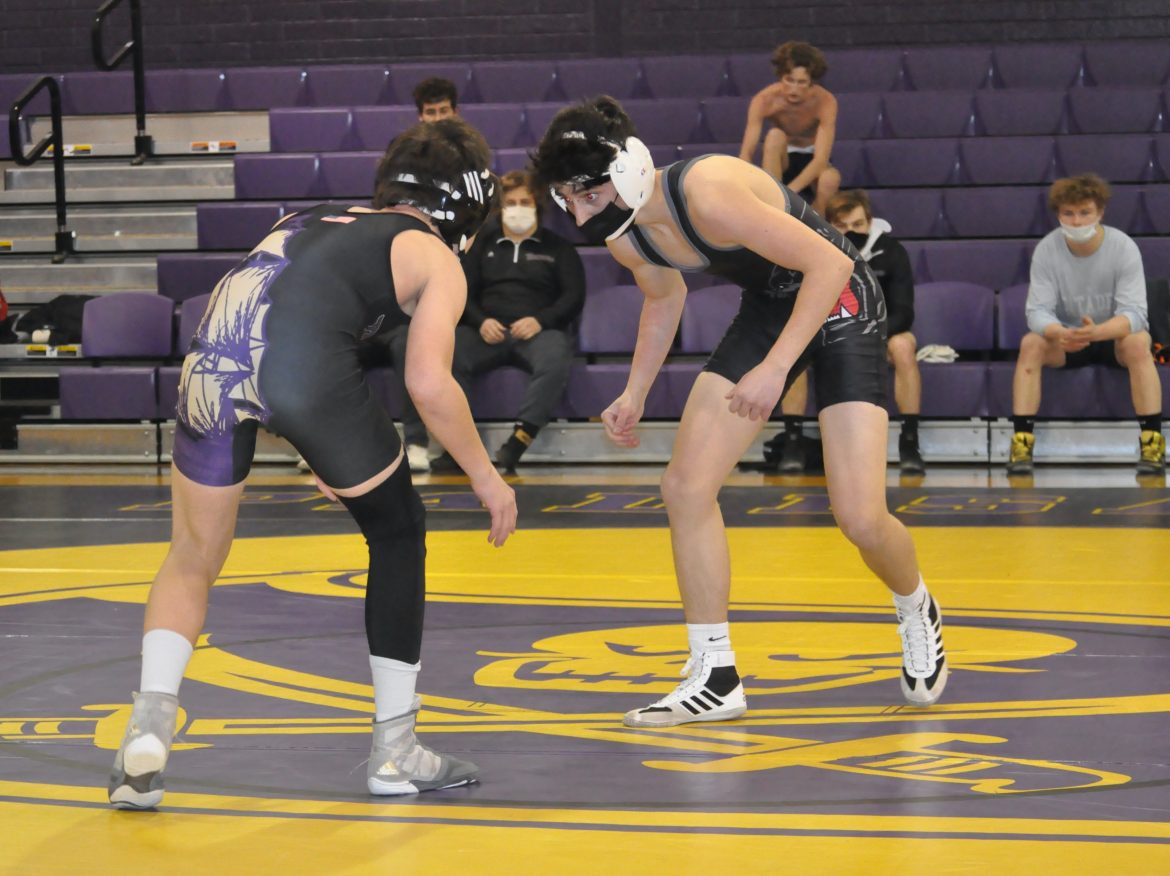 Ermal Duka (right) came thru with a late takedown for victory.

Palisades quickly got on the scoreboard first with Morgan Magditch’s first period fall.  The Pirates also picked up three consecutive decisions from Mason Smeland (152), Dan Kelleher (160) and Ben Haubert (172).  Smeland and Kelleher both rallied late with strong third periods for come-from-behind wins.  Haubert battled for a 3-2 “Ultimate Tiebreaker” victory over Jake Jones.  Smeland, Kelleher and Haubert are all seniors. 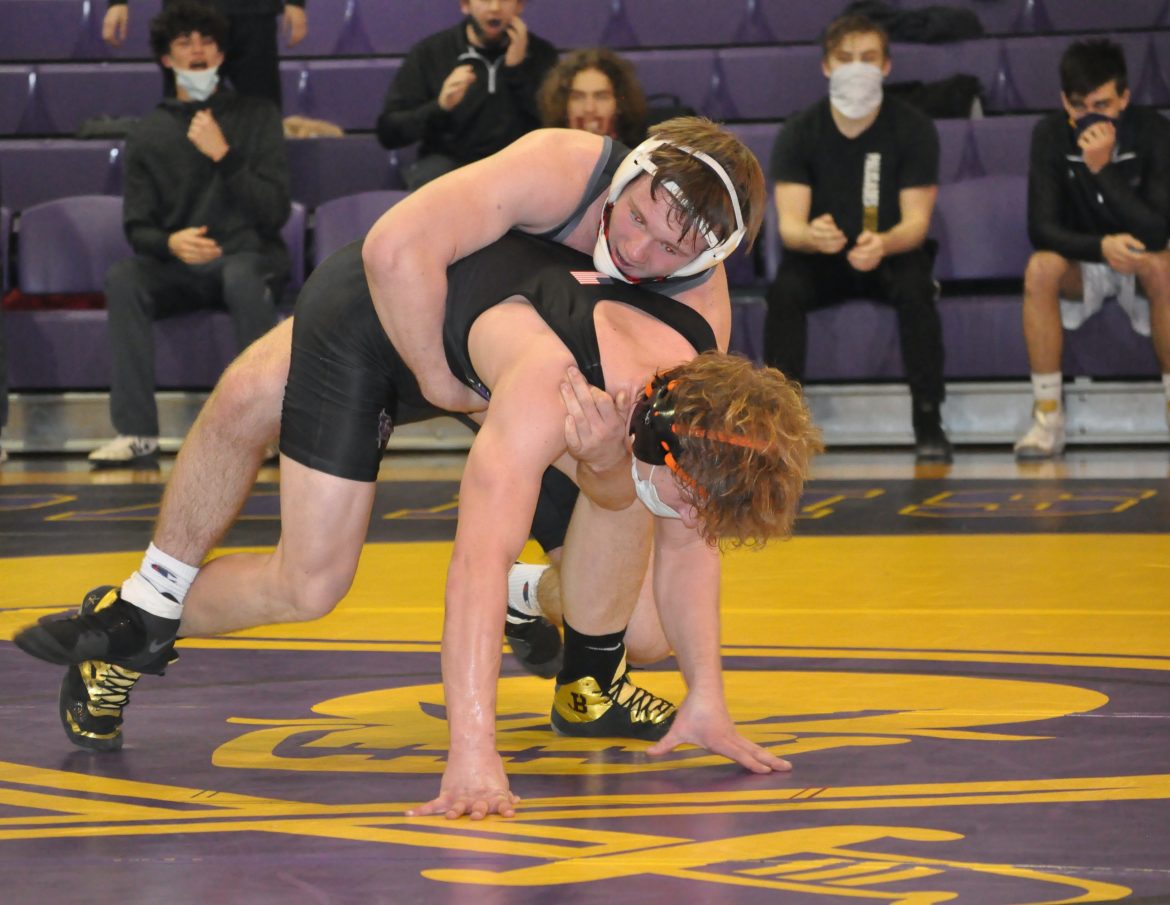 Palisades senior Ben Haubert (bottom) was able to escape from sophomore Jake Jones to win in an Ultimate Tiebreaker.

Up Next:  Saucon Junior-High and Varsity travel to Bangor for a Saturday morning matinee with the Bangor Slaters (10 a.m.).

Good Luck Panthers. The Source is with you! 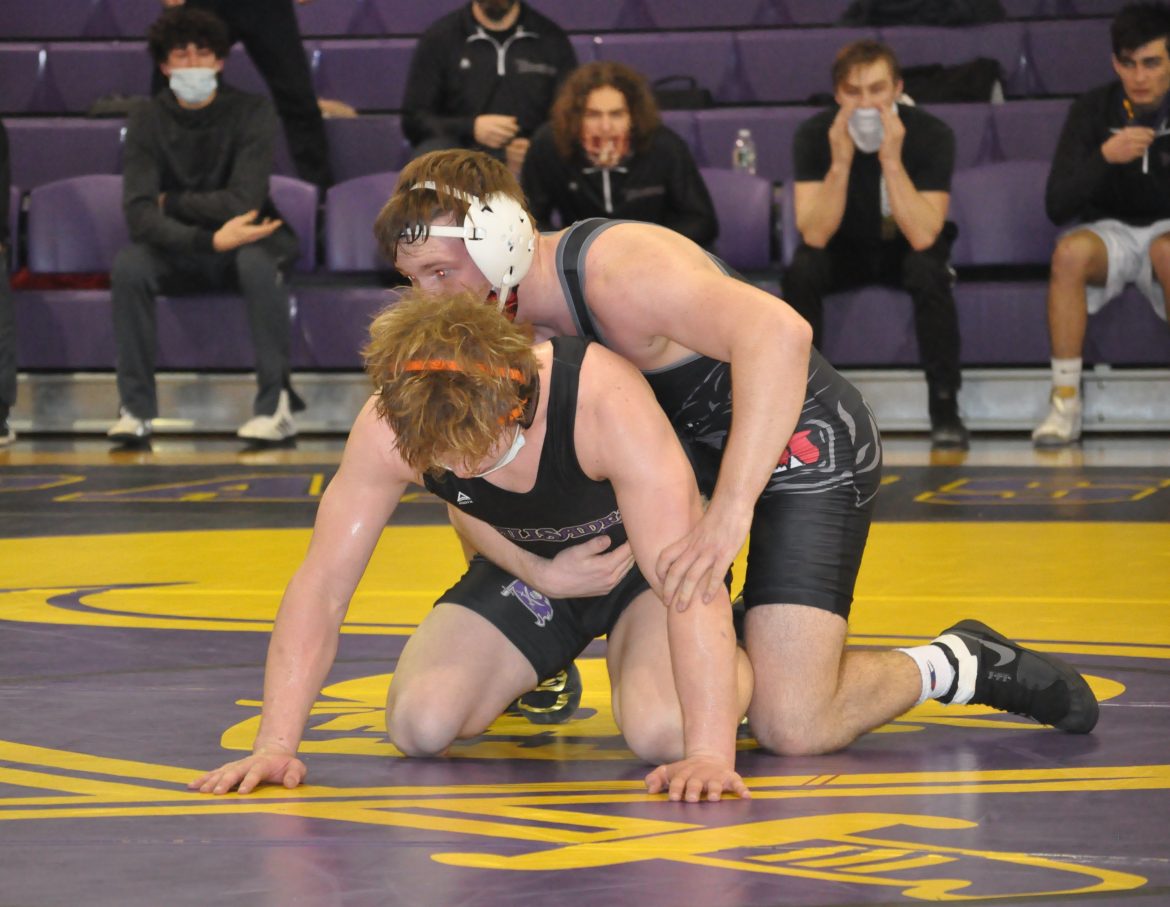 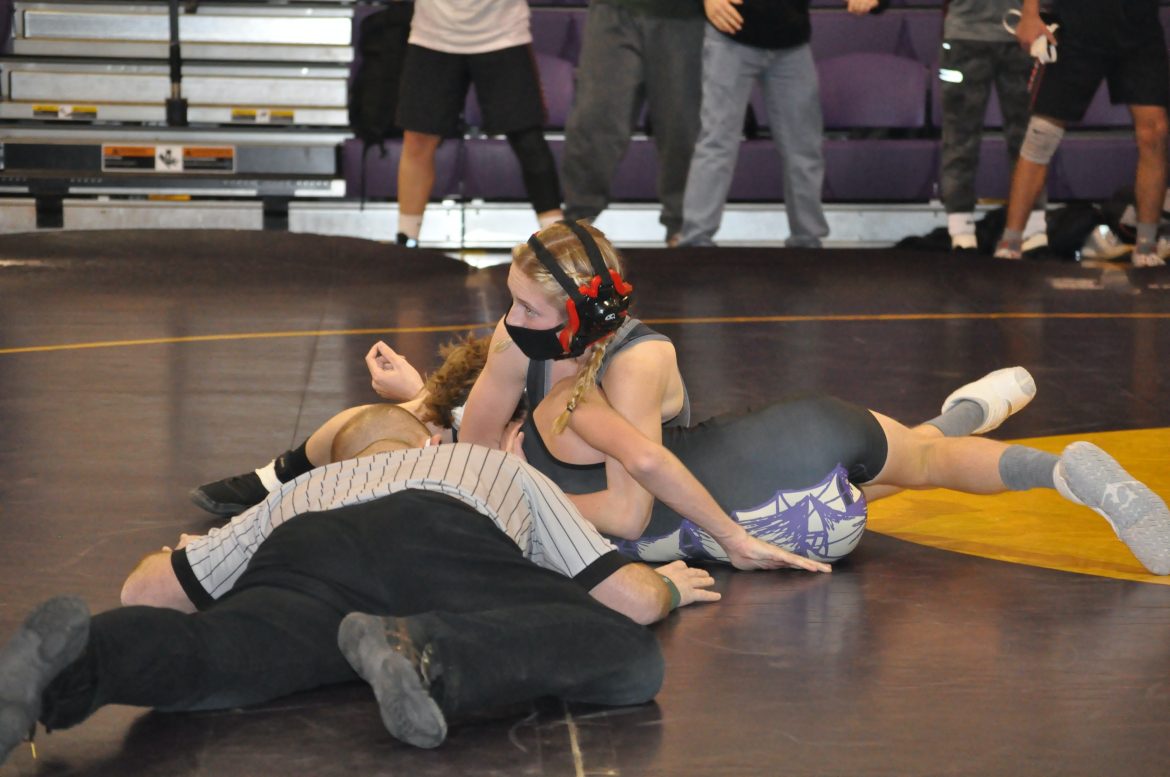 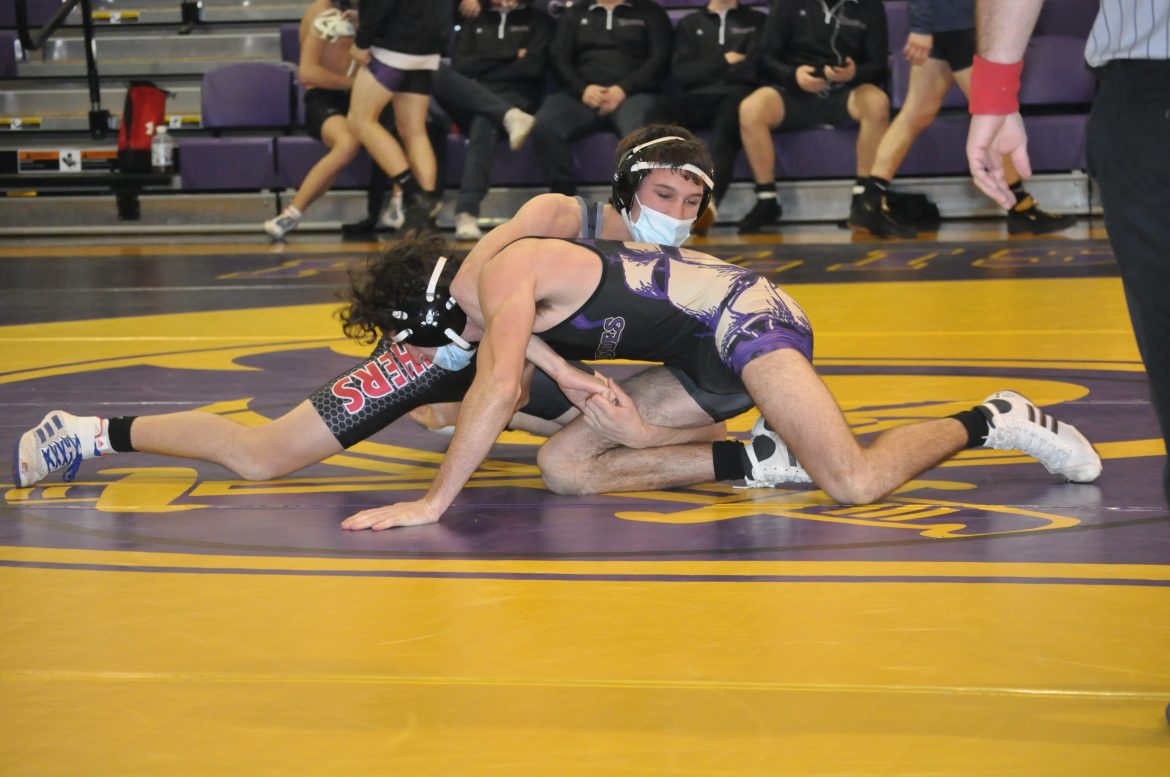 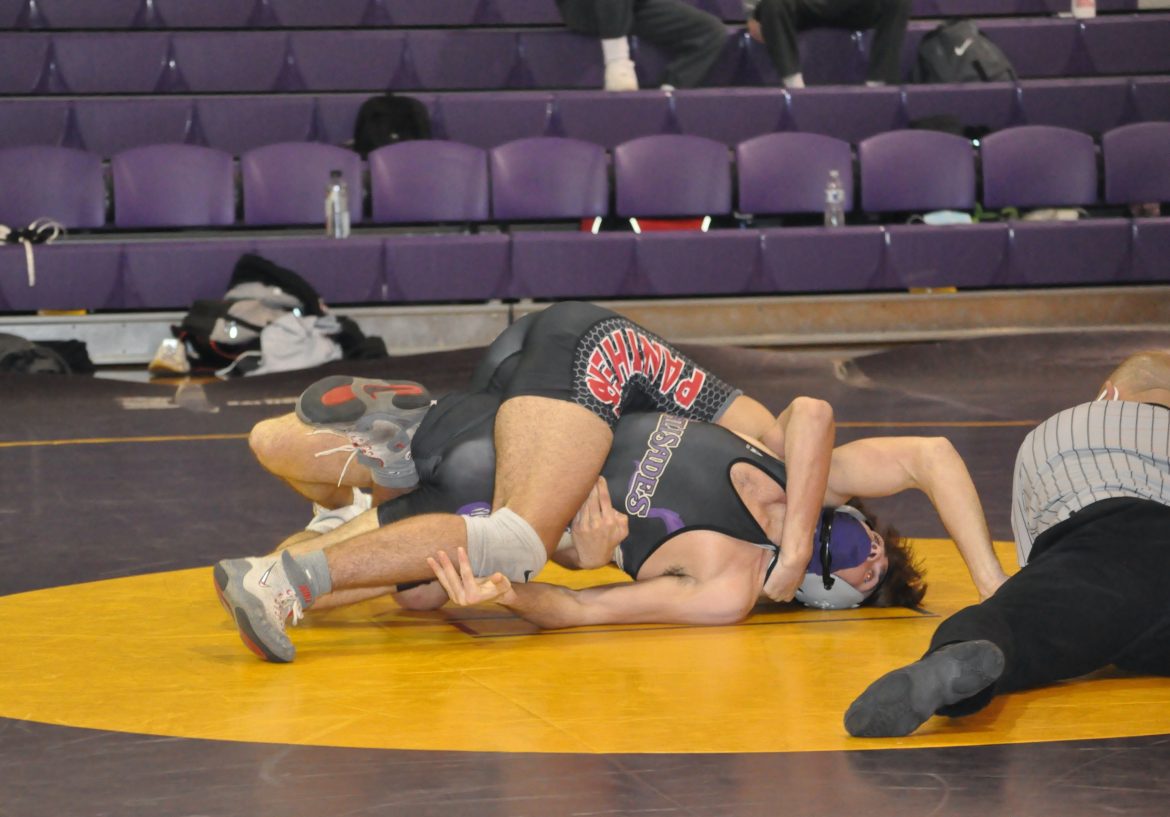 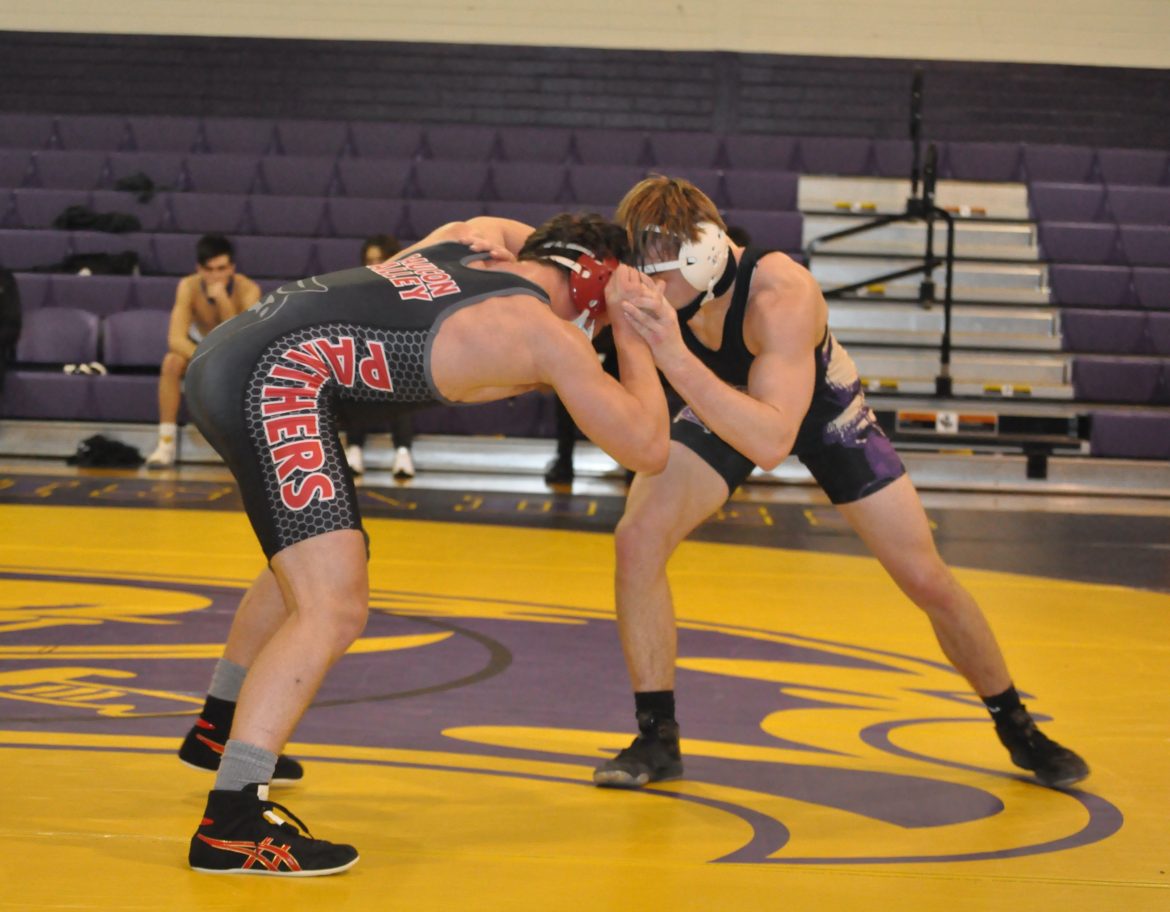 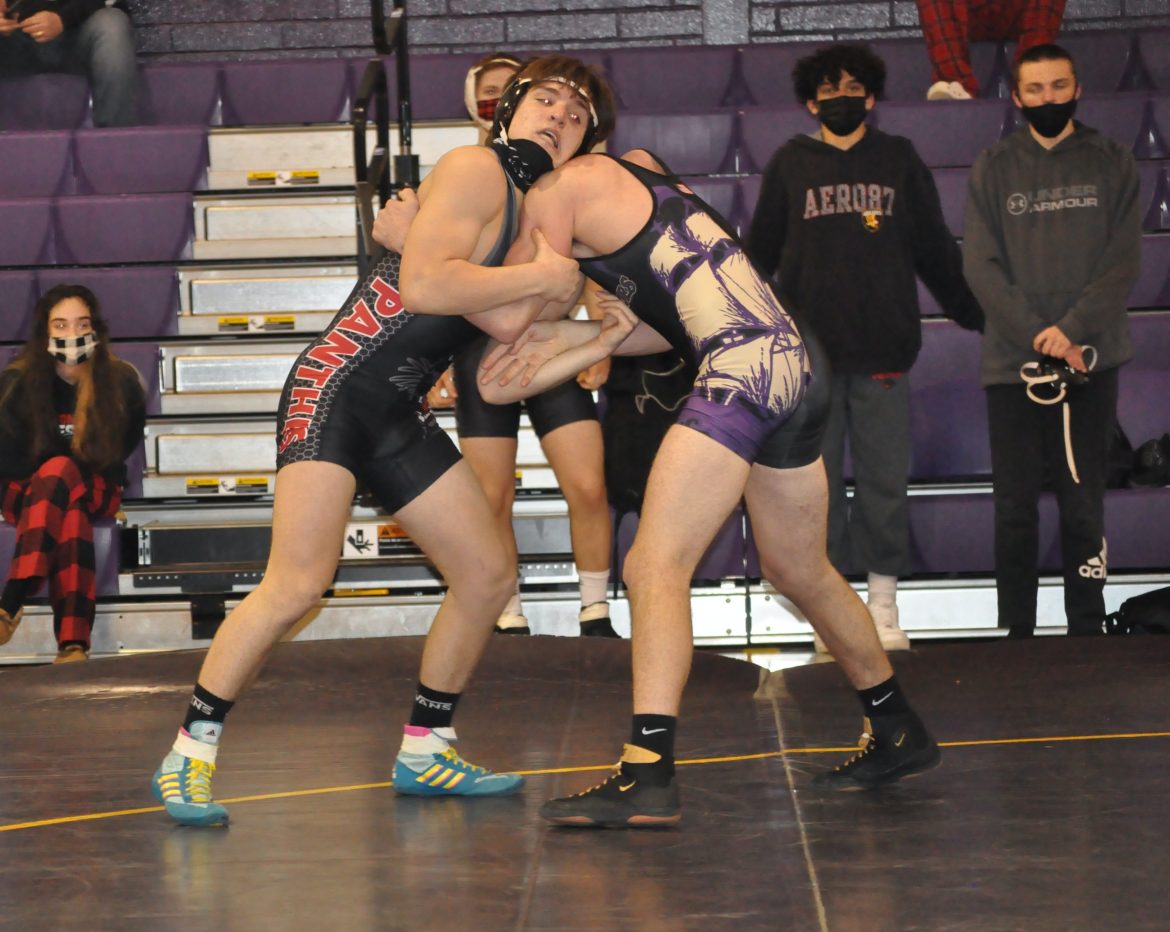 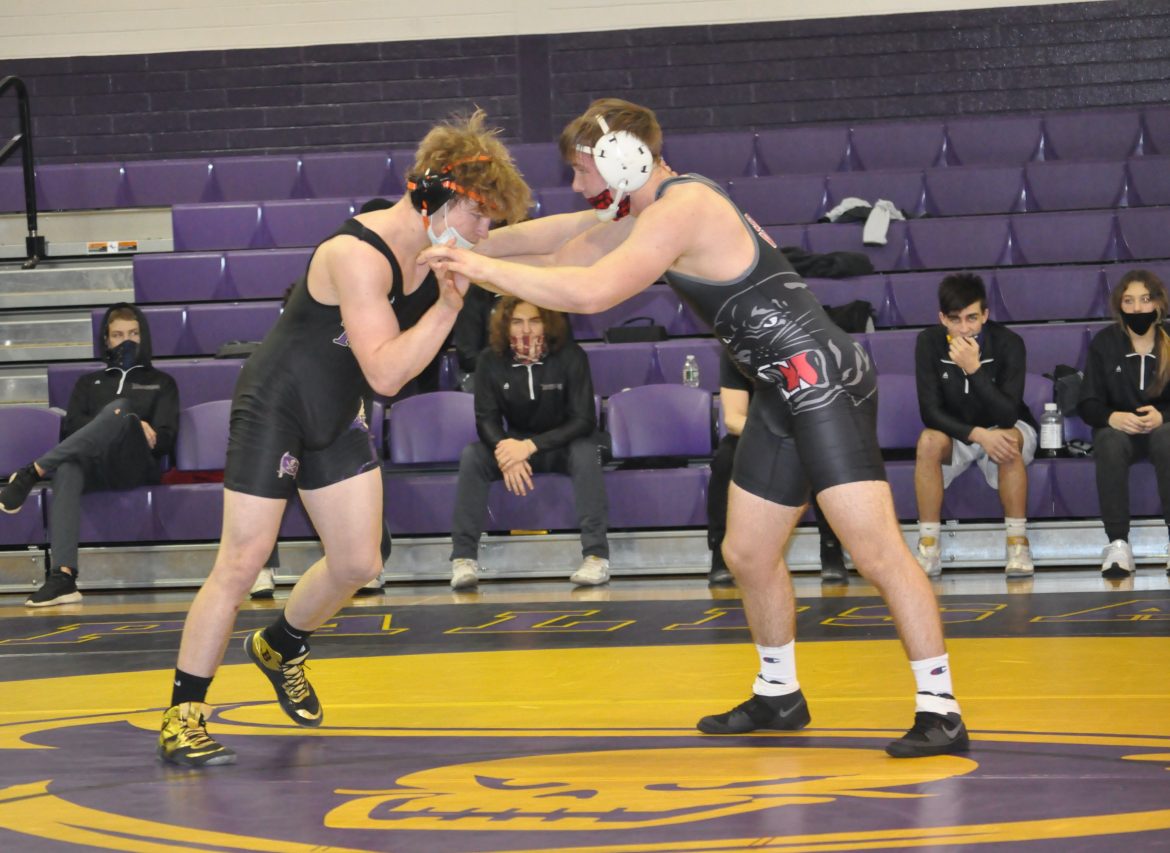 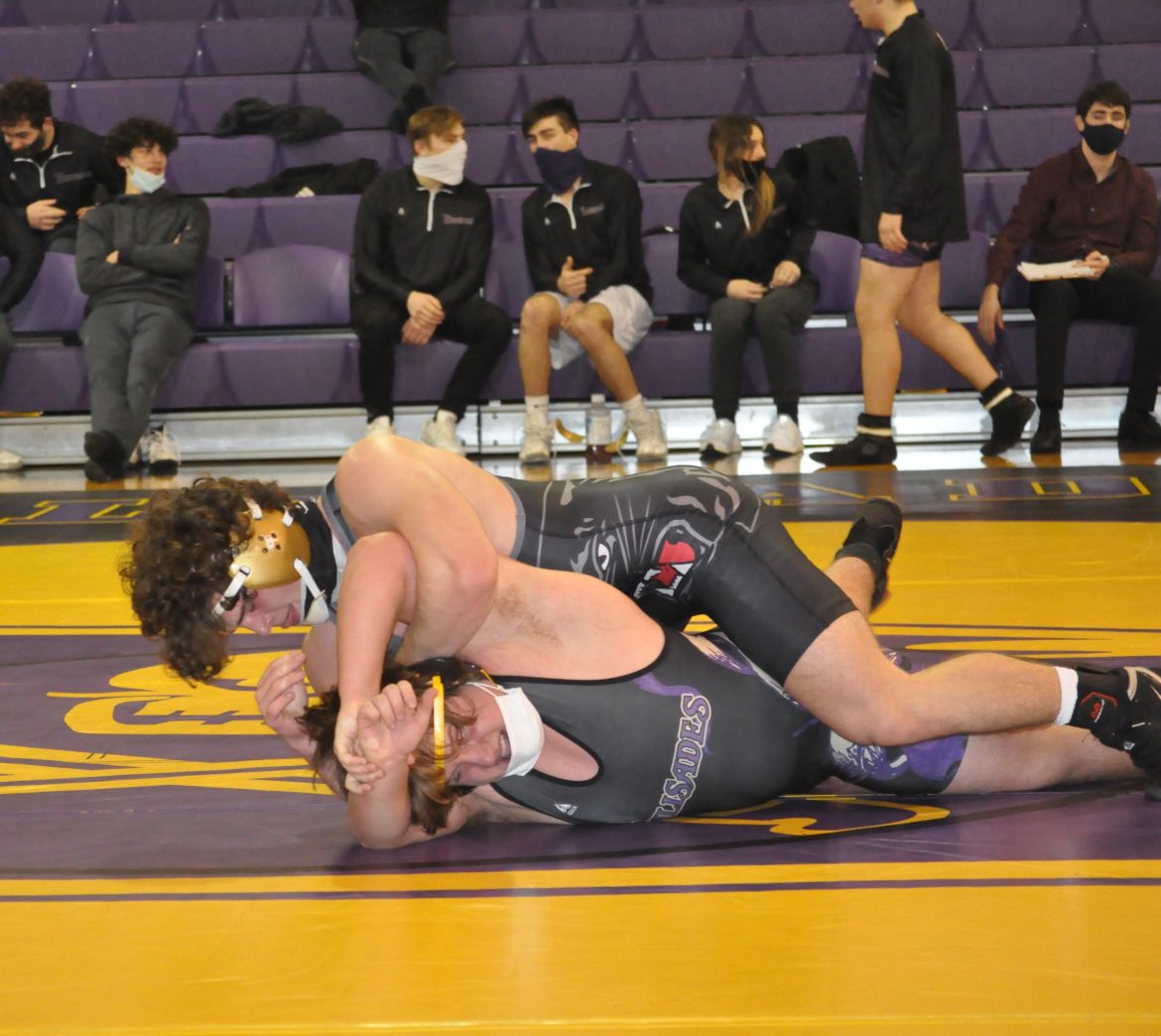