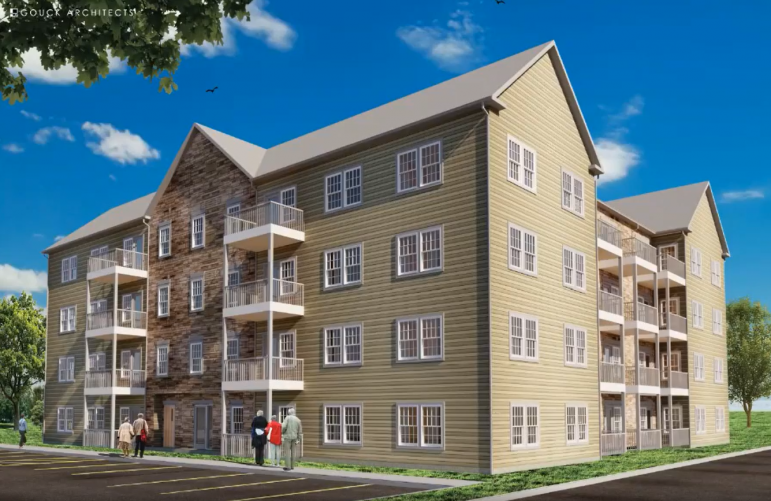 The Hellertown Planning Commission voted against two variances which would have helped developer Abe Atiyeh move forward with his plan to build a new senior housing complex in Hellertown. Atiyeh previously developed and owns Saucon Valley Manor on Main Street, which is close to the site of the proposed development.

Plans for an expansion of Saucon Valley Manor are on hold after members of the Hellertown Planning Commission voted against supporting variances requested for the project by local developer Abe Atiyeh at their March 9 meeting.

Atiyeh was seeking two variances–one for land use and one for building height–to aid his effort to develop a 40-unit senior housing complex on property he owns at 30 Bachman Street in Hellertown.

Atiyeh has developed five other senior living facilities in the Lehigh Valley, including the nearby Saucon Valley Manor on Main Street in Hellertown.

His firm, Exchange 21 LLC, would need a land use variance to develop the complex on the vacant Bachman Street property, because it is currently zoned for industrial use.

Gene Berg, a representative of Exchange 21, attempted to persuade members of the commission that a senior living complex would be a better fit for the 0.94 acre property.

“Our opinion is that developing the property as an industrial use would be to the detriment of the surrounding residential neighborhood to the north, east and south,” Berg said. “An industrial use would generate noise, odors and heavy truck traffic that will not be generated by the proposed elderly housing unit.”

According to the developer’s plans, the 40 proposed apartments would be situated in a four-story building, which Atiyeh said is a duplicate of the most recent building constructed for his nearby Saucon Valley Manor.

The plans include 16 two-bedroom units, 16 one-bedroom units and eight studio apartments, and Atiyeh said tenants would largely be independent, particularly in contrast with the higher levels of assisted living that is offered in Saucon Valley Manor.

He told planners that interest in senior living facilities is growing nationally, which is why the U.S. Department of Housing and Urban Development (HUD) is offering funding for developments like the one he’s proposed.

“So if the federal government wants it, you know there’s a reason why we want to build this in Hellertown,” he continued. “There’s a national trend to serve the baby boomers.”

The developers said they also believe Hellertown is an ideal location for senior housing.

“It’s healthier for an elderly housing facility to be located near a downtown Main Street just like Hellertown, so that the people who live there don’t have to drive everywhere they go,” said Berg. “They can walk to the nearby diner on Main Street, and they can get a cup of coffee and get breakfast, and talk to neighbors and interact with people of different ages, and that’s what we have here.” 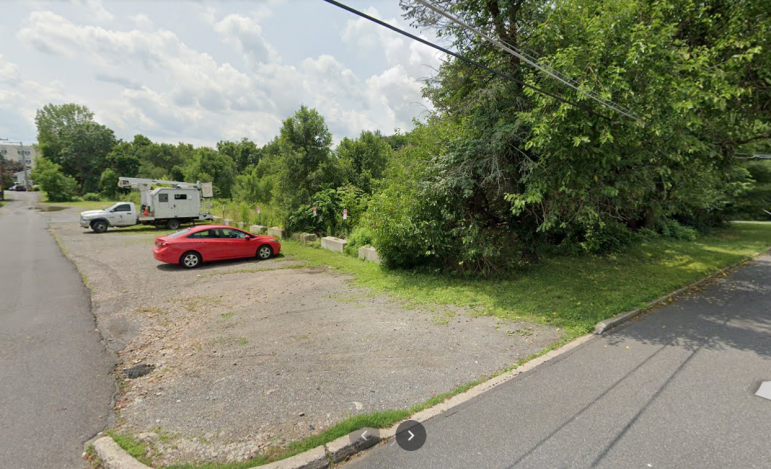 The property at 30 Bachman Street is currently vacant, although part of it is used by a nearby business for overflow parking.

Members of the planning commission, however, were less convinced that the proposed development would be the best use of the Bachman Street property.

Member Maria Diaz-Joves said she felt the developers were being disingenuous in their portrayal of the site as being unfit for industrial use.

“I think they’re painting a pretty bad picture of what industrial use could be in that area,” she said.

Diaz-Joves said the borough is already home to a number of industrial businesses further south on Front Street, and that more senior housing isn’t necessary in the borough.

“I would argue that there are too many senior living facilities here,” she said.

Members of the planning commission also referenced a letter from Dewey Fire Company, whose officials expressed concern over their ability to get fire trucks to the site, which is bounded on three sides by narrow roadways.

“Obviously they’re looking at a four-story construction, so fire access is critical,” said engineer Bryan Smith. “So we want to make sure that those comments can be addressed by the applicant.”

The primary point of access to the site would be from Bachman Street itself, according to Randy Yardumian of Dewey Fire Company.

Bachman is a 24-foot wide street, which is one-way heading west from Main Street to Whitaker Street. Furnace Street and Oak Street run parallel to each other, north-to-south, on either side of the property and are both 16 feet wide. 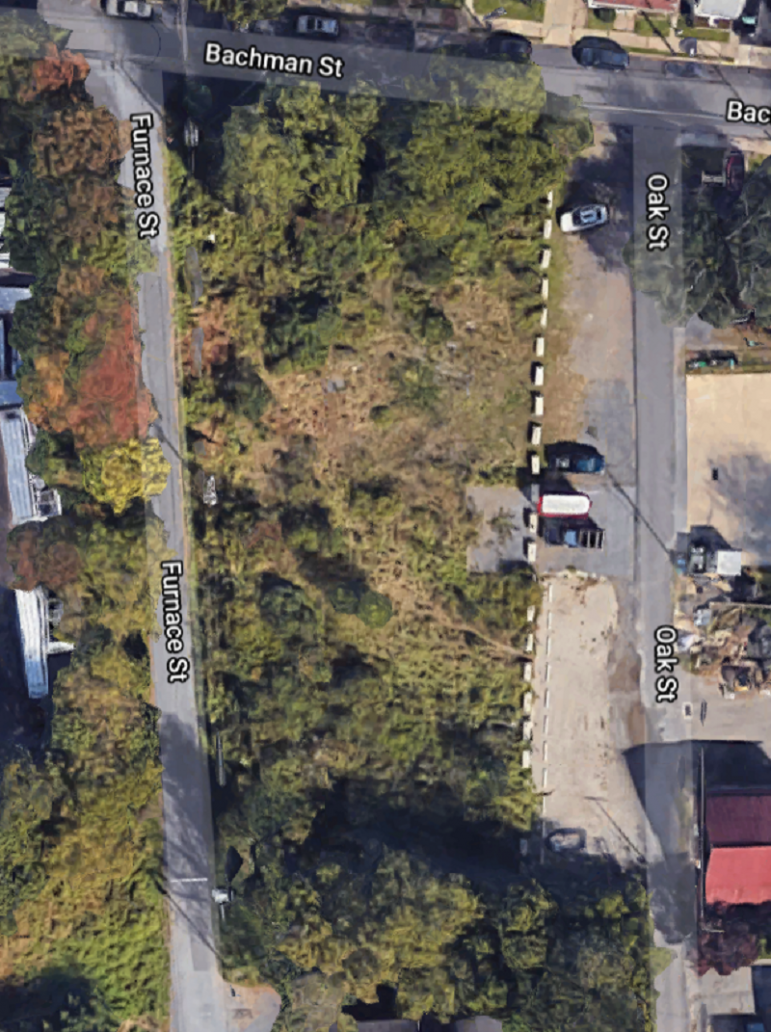 The Bachman Street property is also bordered by Oak and Furnace streets, which at 16 feet wide are functionally north-south alleys on either side of it.

The fire company reported that the widths of the streets pose issues for their trucks, and requested a turning radius analysis from the developer.

“My biggest concerns right now are the intersections. If I can’t get fire trucks through there, it’s a moot point,” Yardumian said. “That’s why we requested quite a bit of no-parking zones, and the fire department certainly stipulates that there is going to be a loss of on-street parking for a lot of residents.”

The developers expressed willingness to work with Dewey to address their concerns and said they have plans to widen the surrounding streets to improve access.

Members of the planning commission were also concerned with the effect the apartment complex could have on parking in the surrounding area.

Several members pointed out that customers of a nearby dental practice regularly park on the Bachman lot, and that there is a current lease agreement that allows for that.

Commission member Kim LaBrake said she would prefer that Atiyeh attempt to rezone the land for residential use rather than seek a use variance.

Some commission members said they agreed that the borough could use more senior housing, but planners ultimately voted against both variances, 4-2.

“I think without a real sketch plan of how they’re gonna get around the fire access and the street widening, it’s hard to imagine how all this is going to work with the amount of footage that’s there,” said member Don Werkheiser.

“There is a massive need for this, and a lot of the people right now in Hellertown are getting older and they need a place to live,” added member Robert Lepley. “My only concern is like what Don was saying, just the tightness of everything that’s in here. For the fire trucks, the on-street parking, there’s a better way to clean this up.”

In closing remarks, Atiyeh commented that he would pursue industrial uses for the property.

“We’re the biggest personal care provider in the Lehigh Valley, and I’m trying to open your mind a little bit to elderly housing. This is a good thing for the borough, and it’s a good thing for a neighborhood,” he said. “An industrial zone allows for a lot of uses. You guys are going to say ‘Wow, we should’ve supported Abe’s project.'”