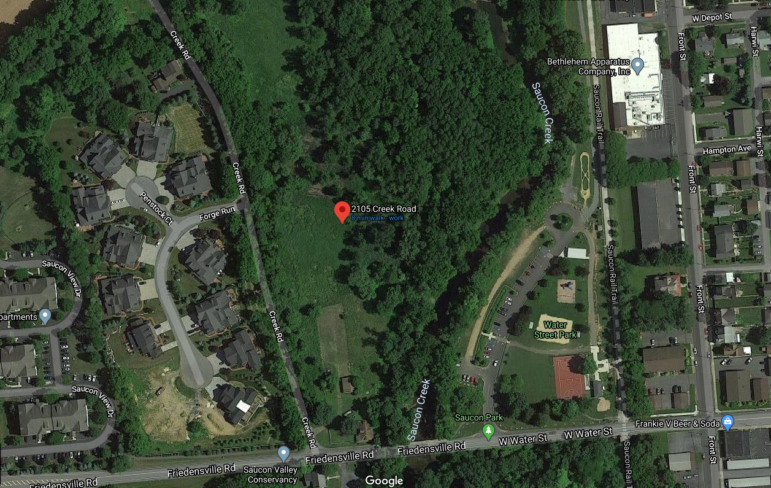 A property that will be the subject of a rezoning discussion at Thursday’s Bethlehem City Planning Commission meeting is located at 2105 Creek Road, just outside Hellertown. The property owned by senior housing developer Abe Atiyeh is at the southernmost tip of the city, where it borders both Hellertown borough and Lower Saucon Township.

UPDATE: The discussion about rezoning the property at 2105 Creek Road has been tabled until the Bethlehem City Planning Commission’s Thursday, March 12 meeting.

Just as news of one recent rezoning controversy at the edge of Hellertown is fading from the headlines, another proposed rezoning–this time along the borough’s border with the city of Bethlehem–appears poised to become news in the Saucon Valley area.

This Thursday, Feb. 13 at 5 p.m., the Bethlehem City Planning Commission is scheduled to hear a request by developer Abraham Atiyeh to have acreage he owns at 2105 Creek Road rezoned from rural residential (RR) to residential retirement complex (RRC).

According to a draft meeting agenda, the requested zoning map amendment would allow for the construction of a 40-unit apartment complex with 60 parking spaces on the property, which is spread across low-lying ground between the Saucon Creek, Friedensville and Creek roads.

The creek forms the city’s border with Hellertown borough in that area and the center of Friedensville Road is the boundary between the city and Lower Saucon Township.

Creek Road in the area of the property is a narrow, occasionally flood-prone thoroughfare with a one-lane bridge and speed humps along parts of it. Part of a traffic calming strategy for the road, the speed humps were installed by the city in the early 2000s.

Northampton County property records list a 6.74 acre parcel at 2105 Creek Road, and identify the owner of it as Creek Investors LLC.

Creek Investors LLC has the same address as the Atiyeh-owned Whitehall Manor.

The company purchased the property in January 2018 for $215,000 from U.S. Bank National Association, according to the county’s records.

The parcel that will be under consideration for rezoning is also currently listed for sale by Atiyeh for $799,000. A real estate listing on Zillow says it includes nine acres with “creek frontage next to (the) historic Heller Homestead and Lehigh University.”

The Zillow listing includes a rendering made from an aerial photo that shows the nearly 7 acres subdivided into nine “carriage home” sites; part of a subdivision called Creek View.

Those nine lots are in addition to a lot at the corner of Friedensville and Creek roads on which there is an existing house. A pole building is located on the site behind the home.

In 2019, a four-story senior apartment building was constructed behind the manor–along Front Street–and Atiyeh recently told borough council he hopes to add more units there. His future construction plans were one of the reasons Atiyeh pledged to help fund the purchase of a new fire truck by Dewey Fire Company when the purchase was approved by Hellertown Borough Council in December. However, whether that financial support will be accepted by the borough remains unclear.

Thursday’s planning commission meeting is open to the public and non-residents may speak on agenda items.

The meeting will be held in the Bethlehem Town Hall rotunda at 10 E. Church St., Bethlehem.

Regardless of what the planning commission decides, any rezoning would ultimately require the approval of Bethlehem City Council. 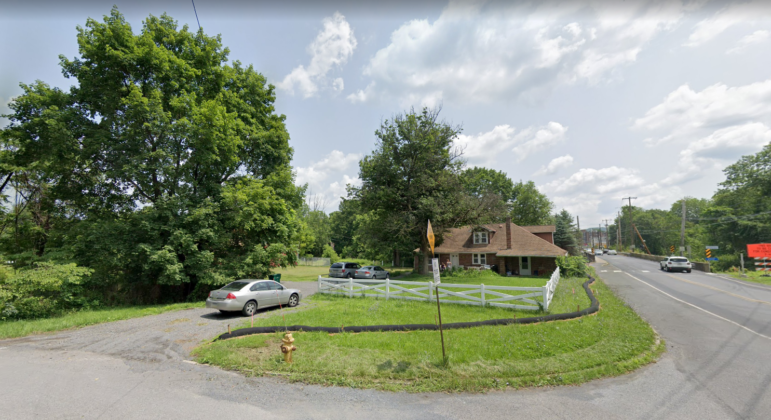 This Google Street View image from the summer of 2019 shows the property at 2105 Creek Road that will be the subject of a rezoning discussion at Thursday’s Bethlehem City Planning Commission meeting.