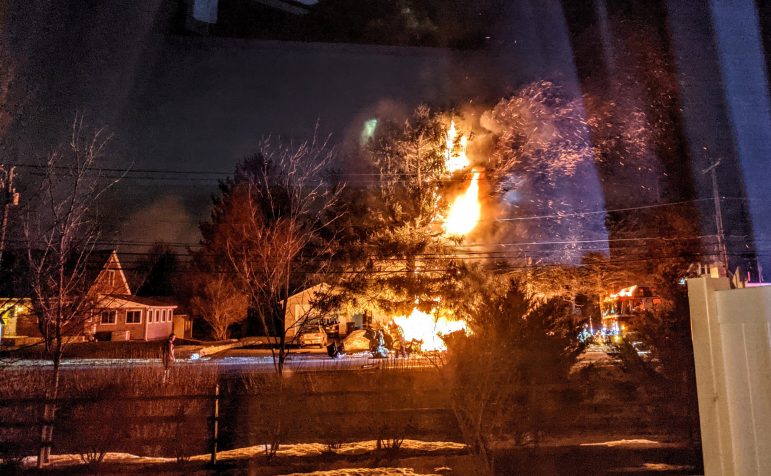 Three young adults with ties to DeSales University lost their lives in a fiery crash March 6 on Lanark Road in Upper Saucon Township, Lehigh County. Township police Wednesday released results of their investigation into the crash, in which they cited excessive speed and alcohol use by the driver of the vehicle, Nicholas “Nick” White, of Allentown. The sole survivor of the wreck was DeSales senior Brandon DiChiacchio, 22, who was critically injured and remained in an ICU until April 13.

Upper Saucon Township Police have released details of their investigation into a triple fatal accident that occurred in the 4400 block of Lanark Road March 6, with a finding that both excessive speed and alcohol may have been factors in it.

In a news release Wednesday, police investigators said the southbound vehicle operated by 2019 DeSales University graduate Nicholas White of Allentown was “traveling at a speed too fast for conditions” when it left the roadway, struck two trees and caught fire.

Police said White’s blood alcohol concentration (BAC) was determined to be .14 percent at the time of the crash, meaning he was over the legal limit for operating a vehicle at the time.

The maximum legal limit for BAC for Pennsylvania drivers is .08 percent. 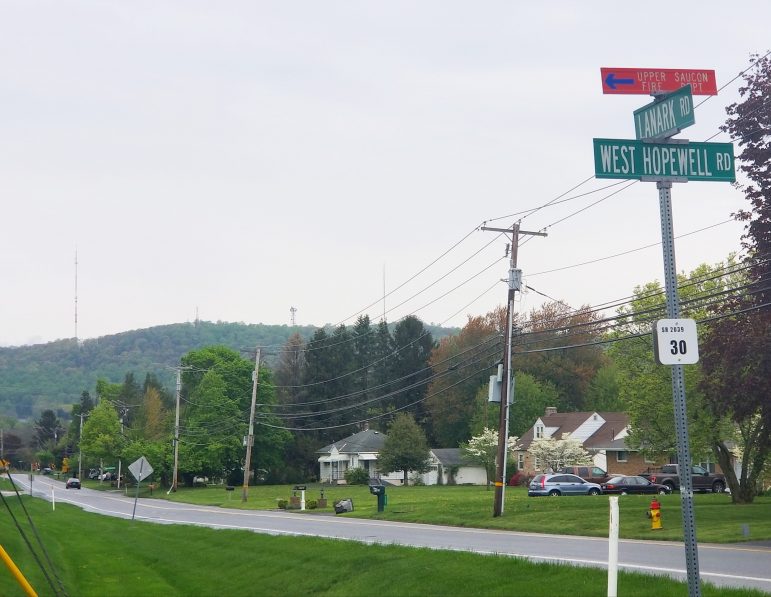 Lanark Road in Upper Saucon Township, looking north toward the area where the March 6 crash occurred.

“Investigation of the accident revealed that the passenger side tires of the vehicle traveled to the right side of the roadway and into the grass along the roadside while negotiating a right curve in the road,” police said in their one-page news release.

At that point, investigators said they believe White, 23, “overcorrected, steering the vehicle to the left.” The investigation further determined that it then traveled across both lanes on Lanark Road and struck a tree at what police called a “1 o’clock position,” before striking a second tree about 10 feet beyond the first tree in the front yard of a home.

“The vehicle finally came to rest and became engulfed in flames,” Upper Saucon Police said, adding that “no evidence of skid marks were located on the roadway.”

While DiChiacchio survived the crash with critical injuries, White and his two other passengers–Emily Kattner, 24, and 21-year-old Sean Hanczaryk–died at the scene.

Lehigh Valley Live reported that the Lehigh County Coroner’s office ruled the deaths accidental and determined that all three had died from blunt force traumatic injuries. 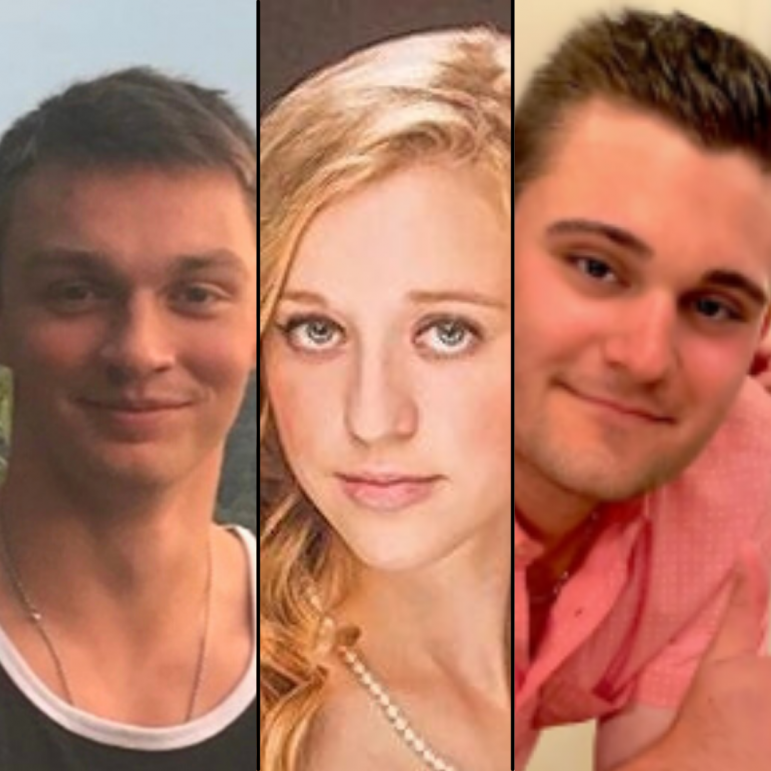 According to his online memorial, Frenchtown, N.J., resident Sean Hanczaryk was a Sport & Exercise Physiology major at DeSales who “loved the biological sciences and history” as well as training, weightlifting, fishing, hiking and skiing. The tribute said Hanczaryk loved all kinds of sports, but especially enjoyed following football, playing baseball and following the Boston Red Sox. “Sean was known for his infectious smile that would light up a room, quick wit and his many circles of friends,” it said.

White, like Hanczaryk, was passionate about sports and turned his love of athletics into a job with Service Electric Cable TV’s local sports network until the COVID pandemic required him to seek an alternative occupation as a Sales Center Leader with Bimbo Bakeries, his online memorial said. The tribute described White as “big-hearted, caring, generous” and “a beautiful soul” with a “warm laugh” and the ability to light up a room.

Kattner, who was White’s girlfriend, was from Jim Thorpe, Carbon County, and had graduated from DeSales in 2019 with a Bachelor of Science degree in business administration and marketing, according to her online memorial. She was most recently employed as an account manager at Dun & Bradstreet in Center Valley and “treasured time spent with her boyfriend, family and friends,” it said. Kattner was known as “a sweet, wonderful girl” who “loved…anything that sparkled,” the tribute said. 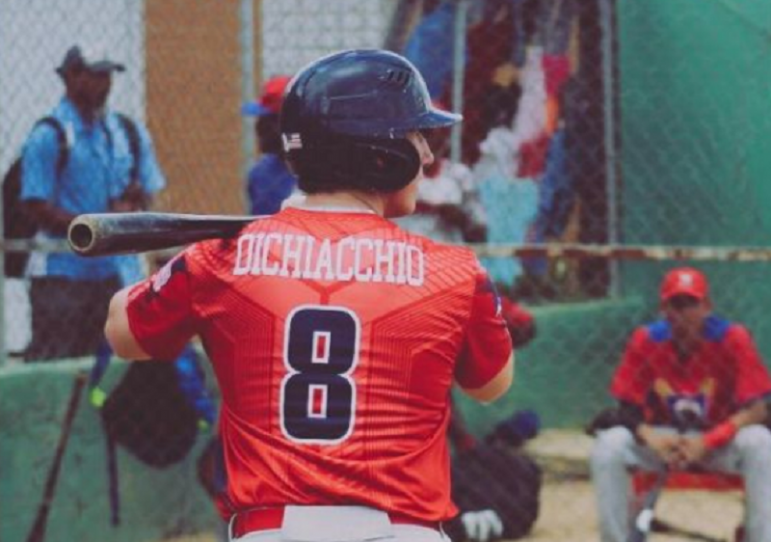 DeSales senior Brandon DiChiacchio, 22, was the sole survivor of the March 6 crash on Lanark Road that claimed the lives of three of his friends, all of whom were connected to the Center Valley school. DiChiacchio was just released from the hospital.

As of Thursday, an online fundraiser for Brandon DiChiacchio and his family had received nearly $70,000 in donations.

According to an April 16 update by the GoFundMe page organizer, DiChiacchio was released from intensive care on April 13 and moved to a hospital rehabilitation ward. Local media outlets reported that he was discharged from the hospital on Wednesday.

“He has been making really good progress so far with rehab,” the GoFundMe update stated. However, it noted that the DiChiacchio family’s home in Delaware County caught fire the same day their son was moved out of the intensive care unit; a setback which has required them to relocate to other living quarters for a period of a few months.

“I ask that you please continue donating to this page to help cover the damages from the fire,” wrote GoFundMe organizer Evan Plummer.

Both DiChiacchio and Hanczaryk were members of the tightly-knit DeSales University baseball team. 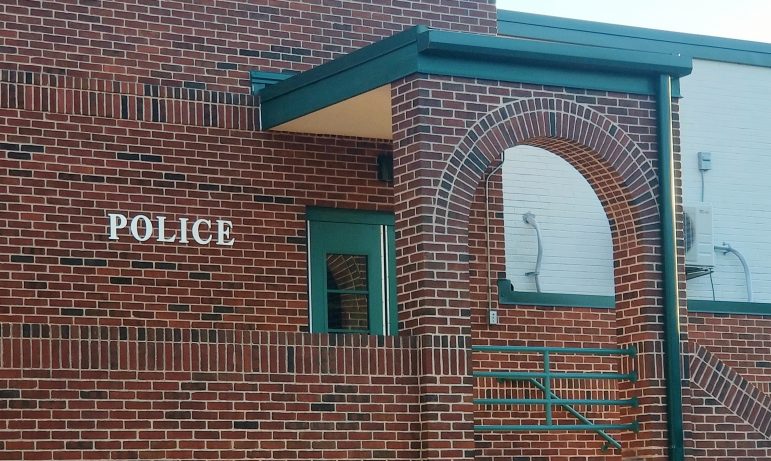 The Upper Saucon Township Police Department investigated the fatal accident that occurred on Lanark Road March 6. This week investigators released findings in which they cited excessive speed and alcohol as likely factors in the crash.

The DeSales University community, which was devastated by the sudden loss of three of its young members, has also rallied around the families impacted by the tragedy, as have their friends and strangers. Support has also been shown for Hanczaryk’s family via a crowdfunding campaign on GoFundMe which as of Thursday had raised over $42,000.