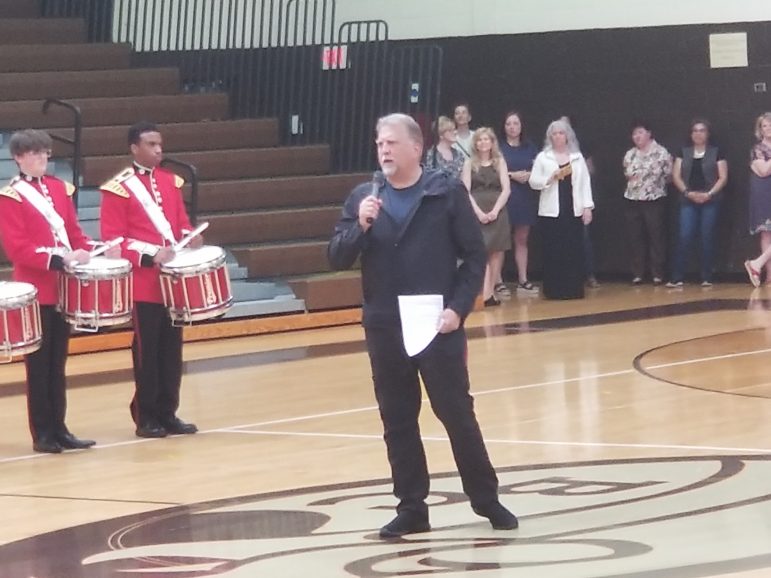 Bethlehem native and Hollywood TV and film star Daniel Roebuck has made a name for himself as an independent maker of faith-based films in recent years. His new project is The Hail Mary, which is being filmed in his hometown this summer. Roebuck spoke at a pep rally-fundraiser for the project at Bethlehem Catholic High School earlier this month.

A new movie that is being directed and produced by Bethlehem native and television/film star Daniel Roebuck is beginning filming in the Christmas City.

Roebuck–of Matlock fame–also stars in The Hail Mary, in which he plays a bitter loner who finds redemption by coaching a rag-tag football team at an all-boys Catholic school.

A number of Roebuck’s independent projects have drawn on his spirituality, which is rooted in his Catholic upbringing, and he visited the former St. Theresa School in Hellertown to address students several years ago.

Roebuck is a 1981 graduate of Bethlehem Catholic High School, which was where a pep rally featuring many of The Hail Mary’s youthful cast members was recently held.

“We are making faith-filled, family entertainment for the entire world,” he confidently told an enthusiastic audience that filled the school gymnasium’s bleachers. “When you watch this movie, you’re not going to believe what you see.”

Nuns play integral roles in The Hail Mary, and Roebuck noted that they have done the same thing in his life.

The Hail Mary will be filmed at various locations around Bethlehem over the next month, and Roebuck said tax-deductible donations are needed to help complete the production.

“We need help with meals. We need restaurant donations. We need to feed approximately 75 people a day,” he said. Other needs he highlighted were things gas generators, water and pop-up tents.

Roebuck said he will also be seeking many extras for a pivotal scene that’s to be filmed in the Bethlehem Area School District stadium, which takes thousands of people to fill.

In terms of COVID-19 precautions, he said masks won’t be worn by anyone acting in the film, “because we’re making a movie for forever.”

The Hail Mary itself is a project developed by Roebuck’s 501(c)3 organization, A Channel of Peace, which is “dedicated to producing and supporting films and other multimedia projects and endeavors that provide insight into the advancement of family, faith in God, and the values of love, forgiveness, good works and gratitude,” according to AChannelOfPeace.org.

“I’m grateful to everyone who prays for our efforts,” he told the enthusiastic crowd at his alma mater. “We’ll see you at the movies.” 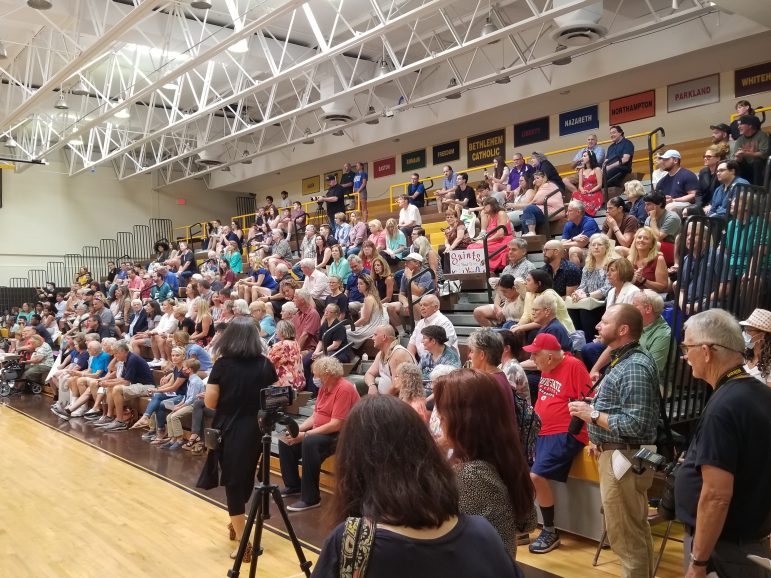 A enthusiastic crowd of supporters accompanied by a gaggle of media filled the Bethlehem Catholic High School gym for Roebuck’s pep rally-news conference about The Hail Mary earlier this month. 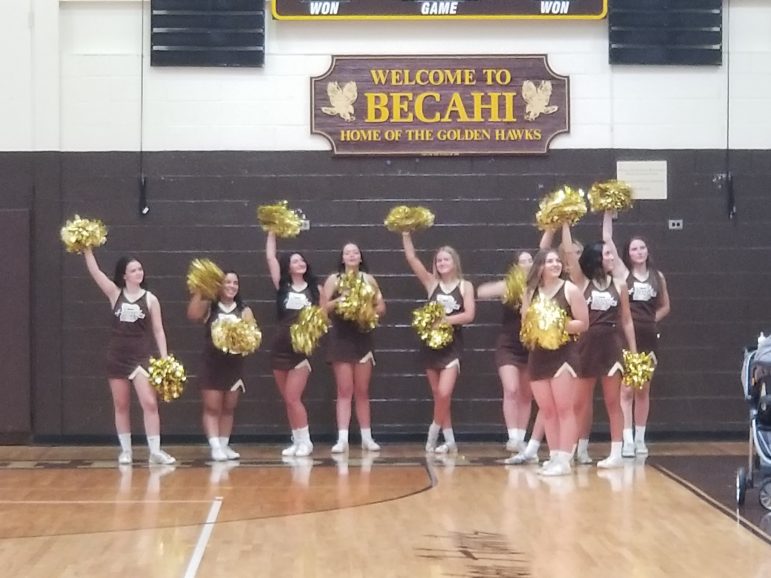 The Bethlehem Catholic Golden Hawk cheerleaders helped excite the crowd at the event. 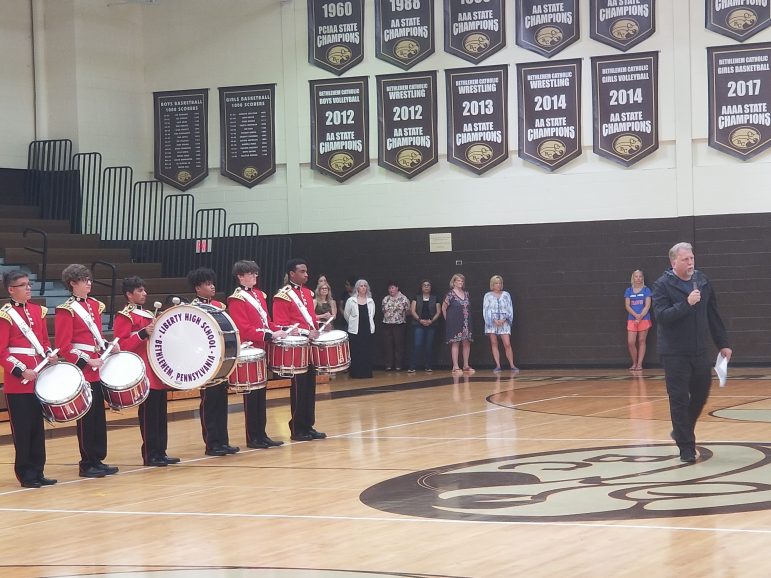 Not to be left out of the show, the Liberty High School Grenadier Drum Corps performed at Roebuck’s rally. 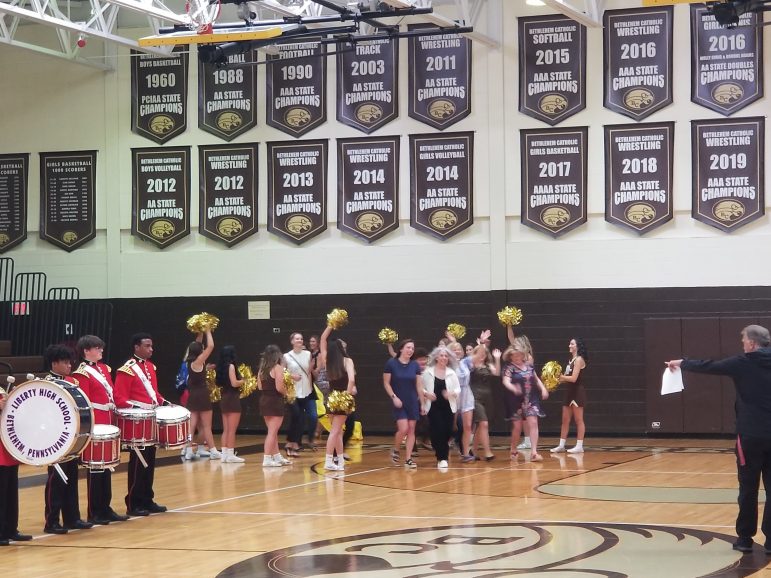 Just like in a regular high school pep rally, cast members of The Hail Mary came running out onto the gymnasium floor as Roebuck introduced them. Above, members of the “Mary Immaculate Nunsemble,” as he called the women who will play the roles of nuns in the film, run excitedly onto the floor. 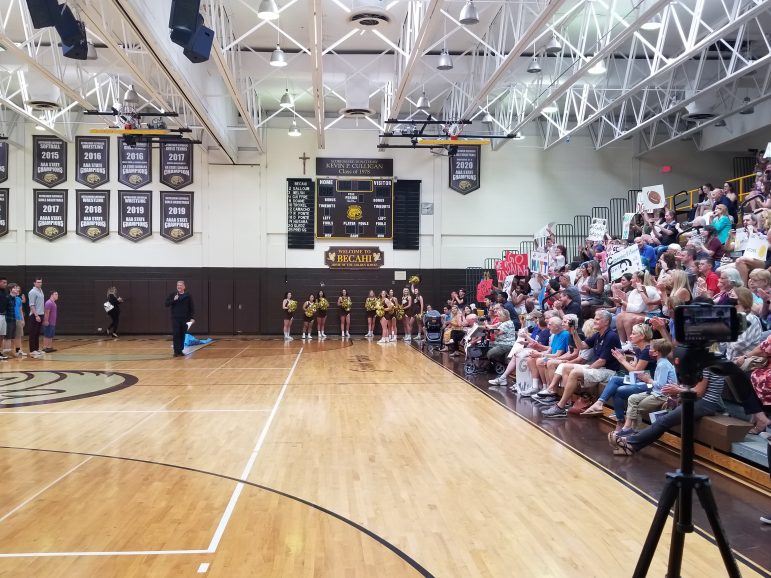 Attendees at the rally held up handmade signs, clapped, shouted and cheered for the movie that is beginning filming. 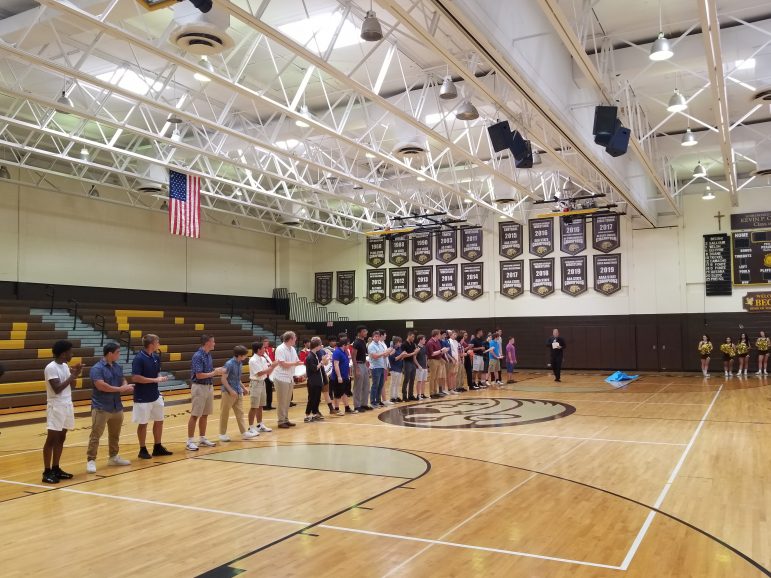 Dozens of local boys will act in The Hail Mary, which tells the story of an unlikely football team and its even unlikelier coach. 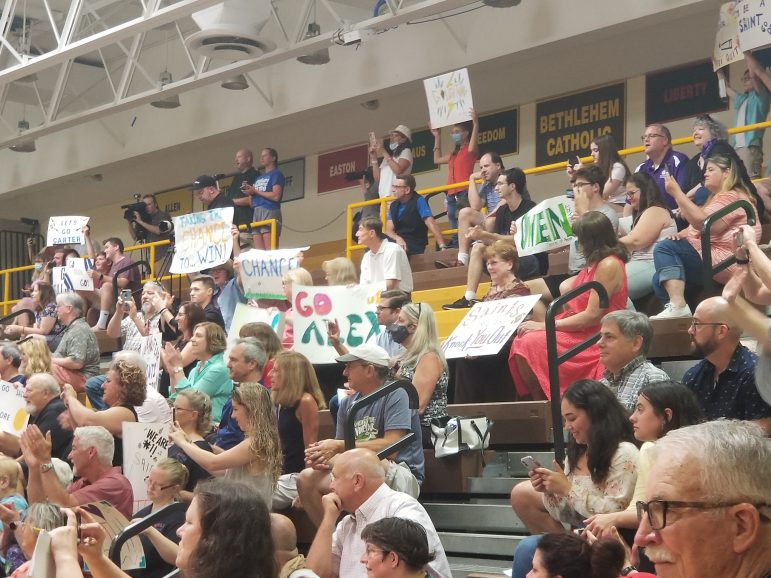 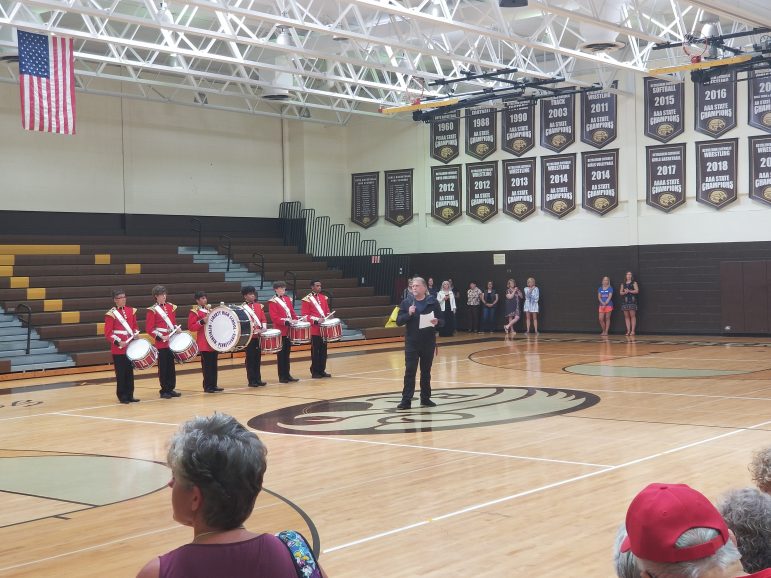 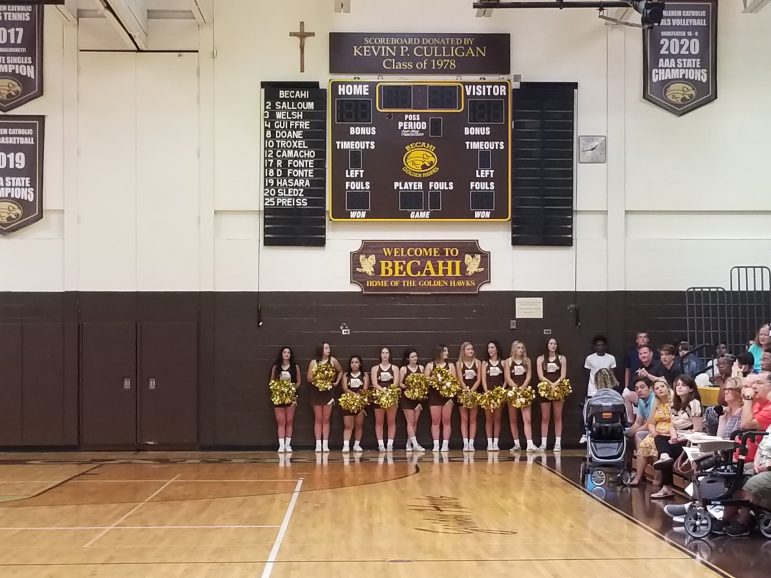 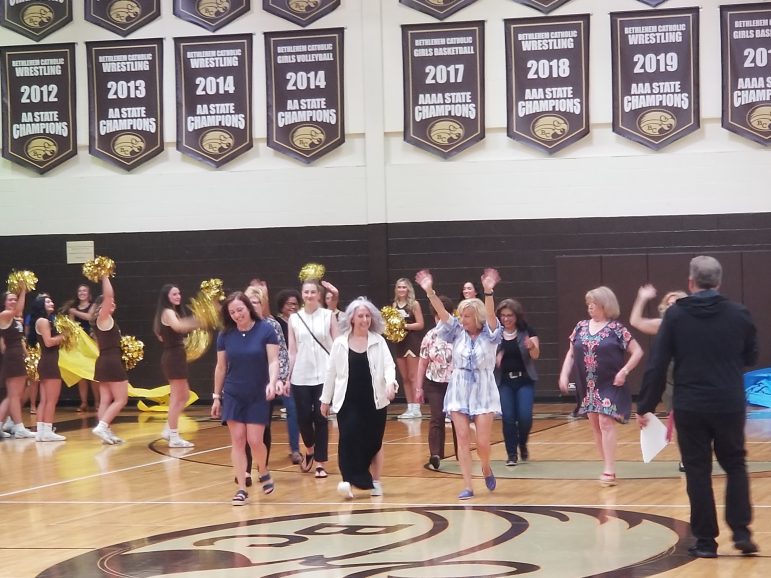 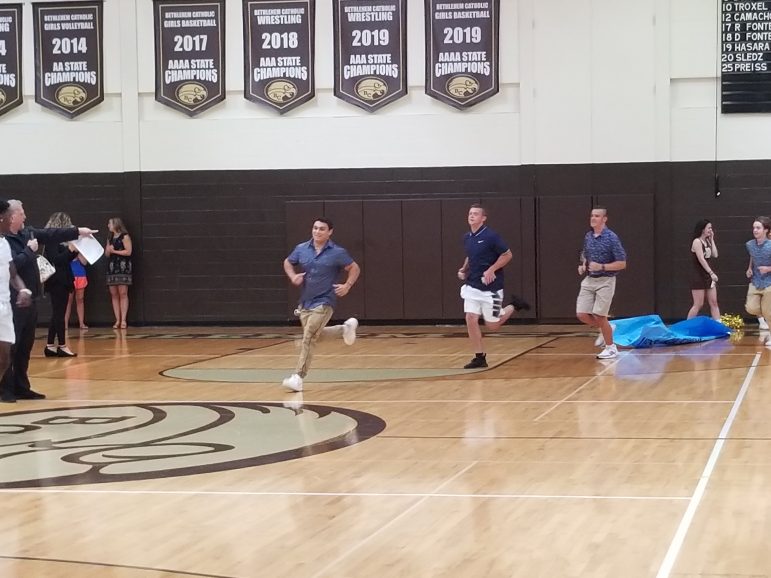 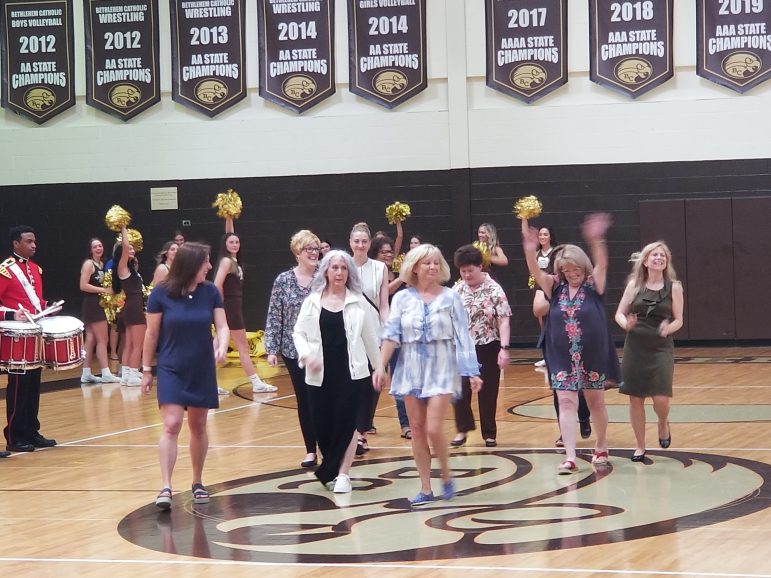