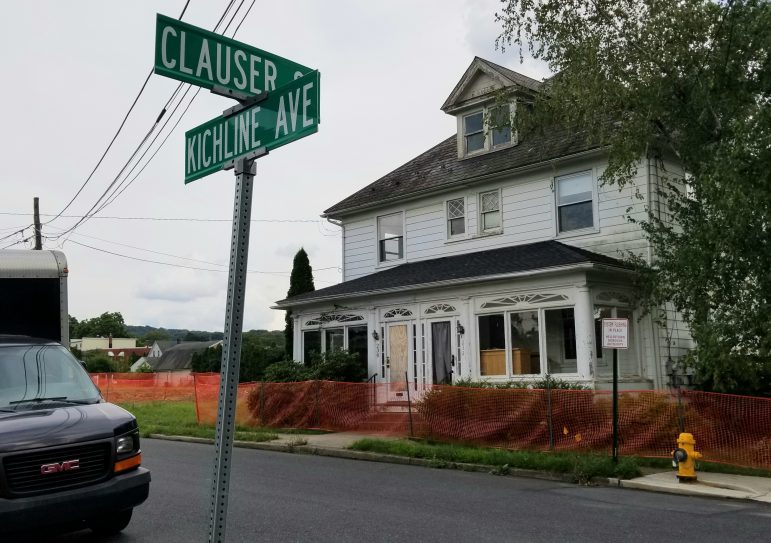 A resident of Hellertown’s north end criticized a mixed-use building under construction in her neighborhood at Monday’s borough council meeting. One of Diane Bachman’s complaints was that she found borough officials to be opaque when discussing development plans. She also complained of speeding on Kichline Avenue, which is where the 28-unit building will be located.

A Hellertown resident told borough council Monday night that an approved mixed use building on Kichline Avenue will contribute to the deterioration of her neighborhood.

Kichline Avenue resident Diane Bachman was joined by a neighbor, Cheryl Falco, at the 7 p.m. borough council meeting. Bachman utilized the meeting’s privilege of the floor time to express various concerns about the construction of a three-story building containing 28 residential and small office units at Kichline and Clauser Street.

Chief among Bachman’s concerns was the impact she predicted the development would have on traffic in the area.

“We’d like to be able to preserve at least a little bit of the community that we have, and we observe, quite frequently, cars going 40 to 45 miles per hour up our street and down our street, and there are children who live there,” Bachman said.

She also pointed out that Kichline Avenue is barely wide enough to accommodate two lanes of traffic, and that residents oftentimes have to wait for a vehicle travelling in the opposite direction to turn off before they can drive down the road.

“We have nowhere to go with our vehicles,” Bachman continued. “We have to use the street, and now you have 28 units coming in? Now you’re waiting God knows how long when you’ve got people coming up and down the street.”

The new building, which is being constructed by a local developer, will have a 56-space parking lot attached to it.

Borough Council President Tom Rieger, as well as the planning commission’s engineer, Bryan Smith, both pointed out that the development met all traffic requirements under the zoning ordinance and that no additional waivers or studies were necessary.

A rendering of the three-story mixed use building on Kichline Avenue at Clauser Street in Hellertown borough that has been approved. The building will consist of 28 residential and small office units. A local resident voiced concern over the effect she claims the development will have on the surrounding area.

Bachman, who said she has lived in Hellertown for 22 years, criticized borough officials by claiming they are catering to land developers and business owners at residents’ expense.

“I have seen this town progressively go downhill and be more favorable towards business owners and other development, and there’s no preservation of the small town anymore,” Bachman said, adding that the development on Kichline Avenue is likely to bring in out-of-state residents from New York and New Jersey.

“We just worry that our neighborhood is going to change dramatically in a short period of time, and it’s not going to be for any benefit to us,” she continued.

Heintzelman said he agreed with some of Bachman’s traffic-related concerns. He added that his own business in the borough–Heintzelman Funeral Home, which is located in the 400 block of Main Street–is impacted by parking issues caused by narrow streets.

“The part that disheartens me is your statement of what Hellertown is built on, and it’s built on families, it’s built on communities,” Heintzelman said. “It’s like a knife to the throat, so to speak, that you feel that way.”

Heintzelman added that borough officials will monitor the development and work to quickly solve any issues that may affect nearby residents.

“I want the residents on that street to understand that the borough will be very proactive in this,” he said.

Bachman also criticized borough planners for what she labeled a lack of transparency in the beginning stages of the planning process, to which Rieger responded that agendas for the planning commission as well as borough council meetings listed the Kichline Avenue development as discussion items whenever necessary.

“I did not vote for this last time, because I had the same concerns…that Cheryl (Falco) had on this particular area,” he said.

He added, however, that if borough council struck down the development plans, their decision would likely have been overturned in court.

Rieger then suggested that it might be an appropriate time for the planning commission to review its zoning ordinance and land use plans to see if improvements can be made before future development takes place in the borough. 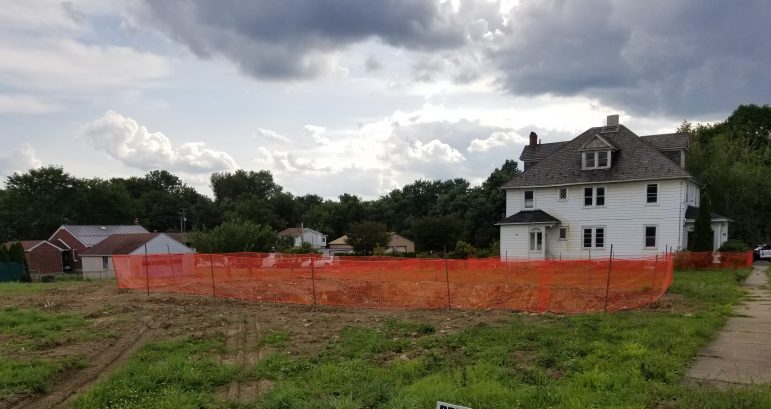 Buildings have already been removed from the site and preliminary work has begun on the construction of a 28-unit mixed use structure on Kichline Avenue at Clauser Street in Hellertown borough. The twin homes pictured at right, above, will also be demolished to make way for the new construction.