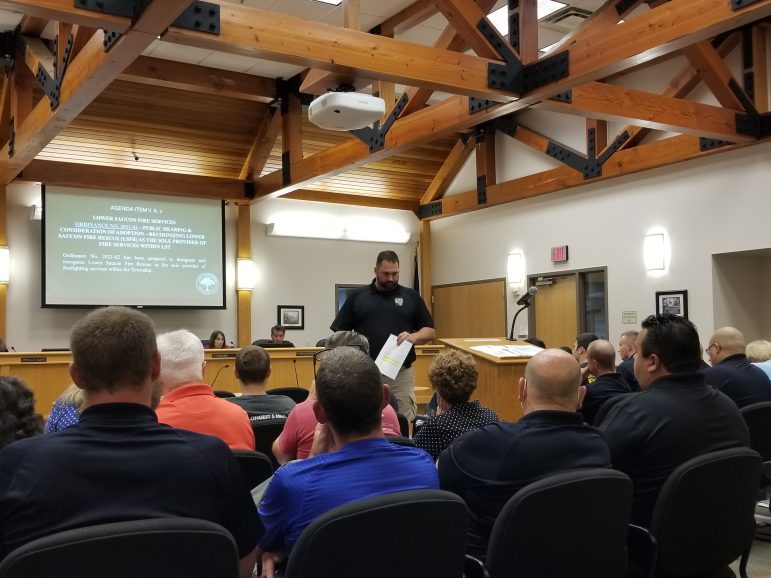 Lower Saucon Township Council members took action Wednesday night to sever ties with one of two volunteer fire companies that have served the township for generations.

Council unanimously voted to make Lower Saucon Fire Rescue the sole provider of firefighting services in the township, effectively ending a longstanding relationship with the smaller Steel City Volunteer Fire Company, which is also located in the township.

Council members had requested a merger beteween the two companies since last year, but according to testimony council heard at an earlier meeting, Steel City officials had failed to fully embrace the goal of completing that by the spring.

At issue were a number of pre-merger requirements Steel City officers floated in a letter from the company’s attorney along with unanswered questions the township raised about a $40,000 donation the company made to a New Jersey police officer in 2019.

Steel City president Scott Nocek spoke at Wednesday’s meeting, telling council that a meeting between officials from both fire companies along with their attorneys was held Aug. 3. The subject of the meeting was “possibly continuing with the merger,” he said, and following the meeting he affirmed that Steel City received applications to complete.

“That was 14 days ago you had them,” Lower Saucon councilman Tom Carocci told Noceck.

“I filled (it) out,” Nocek responded.

Nocek then said that their plan was to turn in all their applications at the same time.

Responding to another question, Nocek said they were following their attorney’s advice by not answering questions about a fundraiser because it didn’t “involve township funds.”

The fact that they held a fundraiser means the township was involved financially, councilwoman Priscilla deLeon said, because it was the township’s workers compensation insurance policy that was covering them at the time it was held.

Councilwoman Kristen Stauffer asked Nocek why no one aside from the company’s vice president attended the previous meeting, where a lengthy discussion about firefighting services was held following Lower Saucon Fire Rescue’s presentation of an annual report.

“I don’t feel like we’ve heard you this whole process,” she said.

Nocek reiterated said they stayed away based on advice from their attorney.

Regarding the possibility of a merger, “we’re open to discussions,” Johnson said. Provided that the members of Steel City can provide background check information and meet other requirements, he said they could be part of LSFR within a week.

“The goal is to work together, make one fire department and make emergency services even stronger in Lower Saucon,” he told council.

“Through this whole process, the fire protection in Steel City isn’t going to be compromised at all,” Johnson stressed.

After council voted 5-0 to make Lower Saucon Fire Rescue the sole provider of firefighting services, council also unanimously approved providing $2,100 in funding for a recruiting event the company said it plans to hold in Steel City in September.

“We need to start rebuilding fire services in Steel City, because it has not been good,” Carocci said.

The event will be held at Steel City Park and will be open by invitation only to residents of Steel City, who will receive invitations to attend it.

“We’re planning to send a letter out to every resident of Steel City,” Lower Saucon Fire Rescue president Scott Krycia said. “Our plan is to directly engage the people who come down.”

He noted that a community-wide recruitment event will be held in October, as it is annually.

He said they have been expanded in recent years to include events like “Touch-a-Truck,” which attracts local families. He noted that the next Touch-a-Truck event will be held at the Giant supermarket on Rt. 412 (in the Creekside Marketplace) on Tuesday, Aug. 24 at 6 p.m.