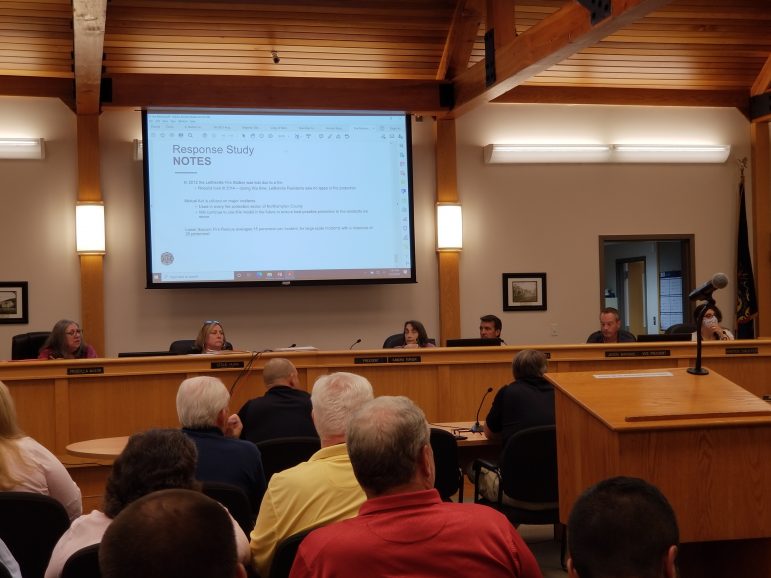 Township residents as well as many members of Lower Saucon Fire Rescue attended Wednesday’s Lower Saucon Township Council meeting, during which a proposed merger with Steel City Fire Company was a principal topic of discussion.

In a case involving Lower Saucon Township Council and Steel City Volunteer Fire Company, a divorce stemming from irreconcilable differences may be in the works.

When council met Wednesday evening, a discussion about whether they should consider making the township’s other, much larger volunteer fire company their only fire services provider took center stage.

The discussion followed the presentation of Lower Saucon Fire Rescue’s annual report by Fire Chief Ty Johnson and company President Scott Krycia; a presentation which made it clear that size is not the only characteristic that distinguishes the two fire companies.

Johnson shared statistics highlighting how the average turnout times for Lower Saucon Fire Rescue’s 67 active members are significantly shorter than those of Steel City, which claims about a dozen active members, although the exact number is in dispute.

The turnout times, which are measured and recorded by the National Fire Protection Association (NFPA) as part of an annual study, document the amount of time between when a firefighter is dispatched and when he or she is en route to the incident scene.

Council members appeared disturbed by the revelation that a type of mandatory audit of all the volunteer fire companies that takes place every five years is being conducted in Northampton County this year, and that Steel City reportedly hasn’t been forthcoming with the information that is required of it. If it isn’t provided, homeowners in the company’s coverage area could potentially face higher property insurance premiums.

“They’re unresponsive to the ISO, they’re unresponsive to (township finance director) Cathy (Gorman’s) request for their annual report,” commented councilman Tom Carocci. “I honestly feel it would be irresponsible for us not to designate Lower Saucon Fire Rescue as the sole fire services provider for the township.”

Township council solicitor Linc Treadwell reported that he had not received an answer to a letter he sent a Steel City attorney regarding a possible financial irregularity related to a $40,000 donation the company made to an injured New Jersey police officer in 2019.

At least some council members also expressed frustration over the fact that Steel City has still not committed to a merger with LSFR that has been discussed for some time.

Council requested in late 2020 that Steel City and Lower Saucon Fire Rescue work together to merge their companies during the first half of this year, and while LSFR’s membership approved the merger last November, Steel City’s members have yet to do so.

The company, through its attorney, previously presented the township with a list of requirements it said needed to be met before it would consider agreeing to a merger.

Neither the chief nor the two assistant chiefs from Steel City attended Wednesday’s meeting, and Treadwell said he had received an email from the company’s attorney informing him that they would not be attending.

“I really appreciated their help, as I was flipping out with a tree on my house,” she said.

The majority of public comments council heard, however, were supportive of Lower Saucon Fire Rescue and the merger.

“The Steel City Fire department–they’re unprofessional, they’re unreliable, and as a Steel City resident, I don’t feel safe,” he said.

Louder’s comments appeared to prompt an unfamiliar face in the audience to walk to the speakers’ podium, where he then introduced himself as Bethlehem Township resident and volunteer firefighter Kevin Kalman.

Kalman said he recently became the vice president of Steel City Fire Company. He went on to address council extensively, even though he said the company’s attorney had advised members not to do so.

“I am in support of the merger,” he said. However, he pushed back against Louder’s characterization of Steel City as unprofessional.

“That is absolutely not true,” Kalman told council, adding, “I don’t know why a police officer thinks he needs to have control over the fire department.”

“Although our numbers are few,” Kalman said, “we have the best interests of the community at heart.”

Carocci asked Kalman whether he would publicly support a topic that had already come up at the meeting: the transfer of Steel City’s assets–including the fire station on Riverside Drive and the company’s equipment–to the township.

“As the vice president of the organization, I would support that,” Kalman said. However, he added that he couldn’t guarantee that would ultimately happen.

When Carocci asked Kalman whether he had spoken to other Steel City officials about the $40,000 donation, Kalman–who said he was not a part of Steel City at the time it was made–told him he had. When Carocci pressed further and asked him about what they had said, Kalman demurred, and reiterated the legal advice he said he had been given.

“We were told by our attorney not to speak,” he said.

Councilwoman Priscilla deLeon, who is a Steel City resident, struck a sympathetic tone in her remarks about the fire company.

“My heart goes out to them, because I know they’re short-staffed,” she said. “I know what it’s like to be a volunteer.”

“To me, it’s more than being short-staffed,” Carocci responded. “I think they’re short-staffed for a reason.”

“I think it’s basically a fraternity house with some toys,” he said. “I think they’re masquerading as a functioning fire company.”

Carocci said he wants Steel City’s officials to do what is best for the township.

His motion to advertise an ordinance that would make Lower Saucon Fire Rescue the sole fire services provider in the township was ultimately approved by a 5-0 vote.

Council will likely vote on that ordinance at its next meeting, which will be held Wednesday, Aug. 18 at Lower Saucon Town Hall, 3700 Old Philadelphia Pike, Bethlehem.

Johnson told council that LSFR has been in talks with the Northampton County dispatch center and will be ready to cover the entire township, when or if the ordinance is passed.

“This has been going on for years,” he said, with regard to talk of a merger. “There’s strength in numbers, and we proved it by merging Southeastern and Se-Wy-Co.”

“We get a lot of phone calls from across the area, (asking) ‘How did you guys merge?'” he told council. “I think we’re doing something right.”