The summer of 2021 has been hot, humid and relatively wet, and the start of September could be even wetter, according to weather forecasters.

The remnants of Hurricane Ida are expected to affect eastern Pennsylvania Wednesday and Thursday, when they could bring flooding rains, the National Weather Service has warned.

In a Hazardous Weather Outlook Monday, the NWS office at Mount Holly, N.J., noted that “periods of heavy rain and scattered thunderstorms associated with (Ida) will result in widespread 3 to 5 inches of rain, with locally higher amounts likely exceeding 6 inches from late Tuesday night through Thursday morning.”

The recent wet weather the area has experienced could exacerbate any flash flooding that results from the next round, and could also raise river levels past flood stage, it said.

“Flooding of creeks, streams, urban areas and poor drainage areas is possible,” the outlook indicated. “Water is likely to cover the roads, especially in low-lying areas. Moderate to major flooding is possible along the main stem rivers, and roads and structures near these rivers may be flooded.” 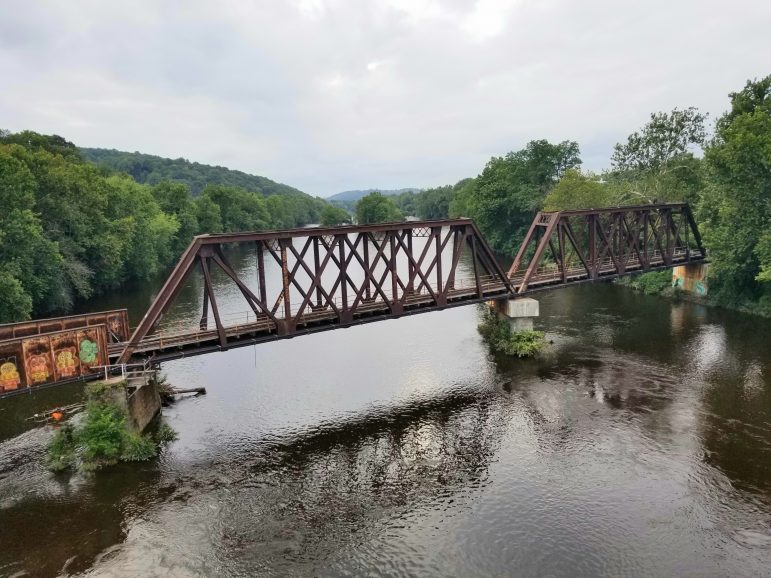 The Lehigh River at Bethlehem, looking west toward Allentown, was calm on Sunday afternoon.

If Ida does produce significant flooding, it will occur almost exactly a decade after the remnants of Hurricane Irene flooded parts of the Saucon Valley.

A flash flood watch that includes Northampton, Lehigh and Upper Bucks counties as well as other parts of eastern Pennsylvania and western New Jersey is in effect from 8 a.m. Wednesday to 8 p.m. Thursday.

A flash flood watch means there is the potential for life-threatening flash flooding to occur. Heavy rain is expected to fall over a short period of time, with rapidly rising flood waters potentially covering roadways and areas with poor drainage. Streams and creeks could leave their banks, flooding nearby properties.

Area residents are encouraged to monitor their local weather forecasts, especially if they live in a flood-prone area, and be prepared in case a flash flood warning is issued for it.

After the remnants of Ida depart the area on Thursday, cooler air is in the forecast.

Highs in the mid to upper 70s and sunny skies are in the forecast for Labor Day weekend.