Richland Township Police recently announced charges against a man who they say was involved in an altercation at the Walmart store at 195 N. West End Boulevard (Rt. 309) in the township in June.

In a post published on the department’s Crimewatch site last week, police said Barry M. Whiteman, 60, of Hatfield, Montgomery County, was involved in a “verbal altercation” and “pulled a knife” on another person at the store. 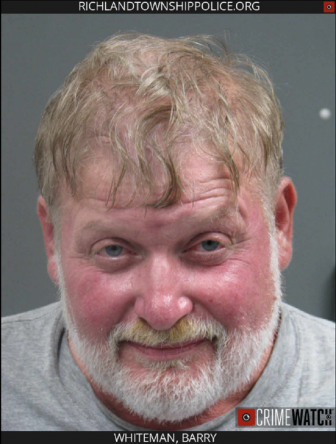 According to court records, the alleged incident occurred June 8.

Police said in their news release that it ended without injury when “a retired police officer intervened in the situation,” and that they filed charges against Whiteman on July 20, following an investigation.

According to the criminal court docket filed in the case, Whiteman was committed to the Bucks County Correctional Institution in lieu of $250,000 bail following a preliminary arraignment before District Judge Lisa Gaier on July 23. As of Sept. 9, he remained incarcerated there, according to the document.

A preliminary hearing before Gaier that was scheduled for Aug. 5 was continued and is now scheduled for Monday, Nov. 22 at 9 a.m., according to the docket.

Court papers did not list an attorney for Whiteman in that case.

In another case from June in Richland Township, authorities have charged Whiteman with DUI-Highest Rate of Alcohol (blood alcohol concentration of .16 or higher), fleeing or attempting to elude an officer, accidents involving death or personal injury, accidents involving damage to an attended vehicle, failure to stop and render aid/give information and various other charges.

According to the Bucks County Court of Common Pleas docket filed in the case, Whiteman was originally facing 19 charges as a result of that alleged incident, but seven were withdrawn at the lower court level.

Whiteman was jailed in lieu of 10 percent of $100,000 bail following his preliminary arraignment in that case, in which he has a formal arraignment scheduled for Sept. 17.

A trial date of Wednesday, Dec. 8, has been scheduled in that case, in which Whiteman is being represented by the Bucks County Public Defender’s office.

In another case out of Bucks County, Whiteman is charged with DUI-Highest Rate of Alcohol, third offense, in a case filed by the Hilltown Township Police Department.

According to the docket for that case–which has been before District Judge Regina Armitage–Whiteman was arrested for that DUI in Silverdale borough on June 28.

Whiteman was previously arrested for DUI by Hilltown Township Police in Silverdale on Feb. 26, according to a different docket, and is charged with misdemeanor DUI, third offense, in that case.

Note: All individuals accused of or charged with a crime are presumed innocent until proven guilty in a court of law. This story was compiled using information from the Richland Township Police Department and Bucks County court records.