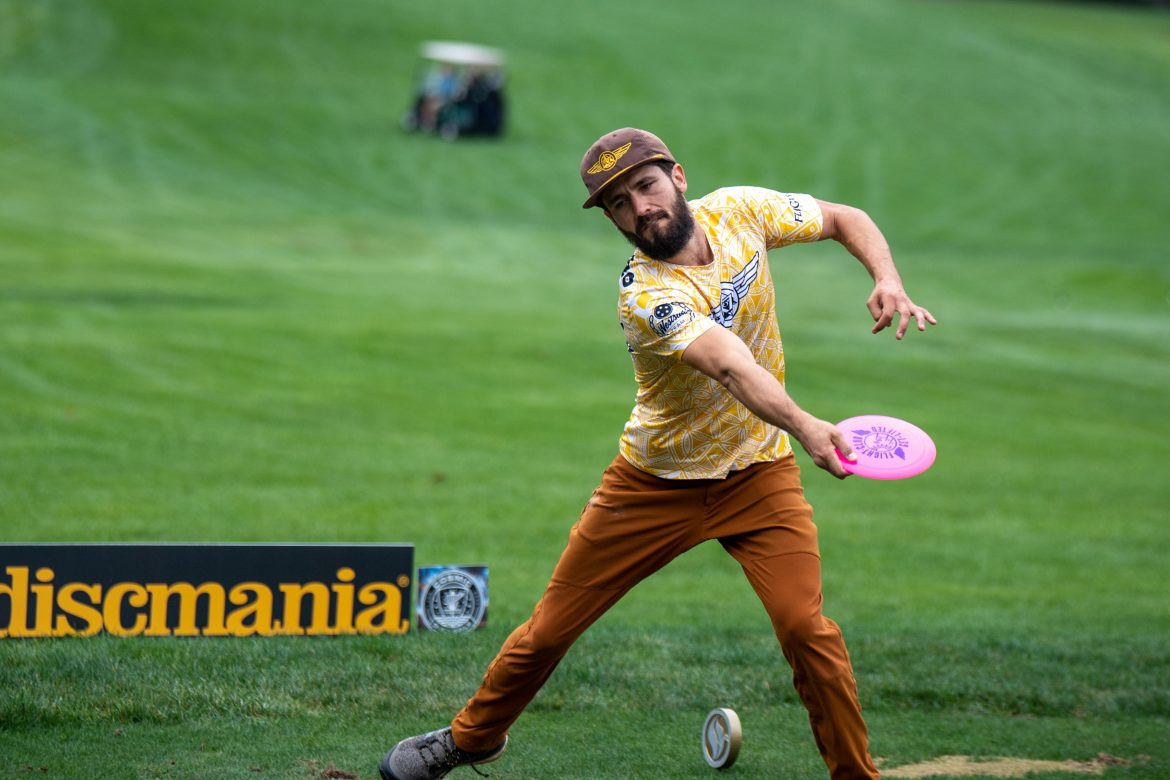 The 2021 Disc Golf Pro Tour Match Play Championship is underway from Steel Club in Hellertown. 16 of the top professional men's disc golfers got their tournament started with rounds on Friday. The tournament will conclude with championship rounds on Sunday. 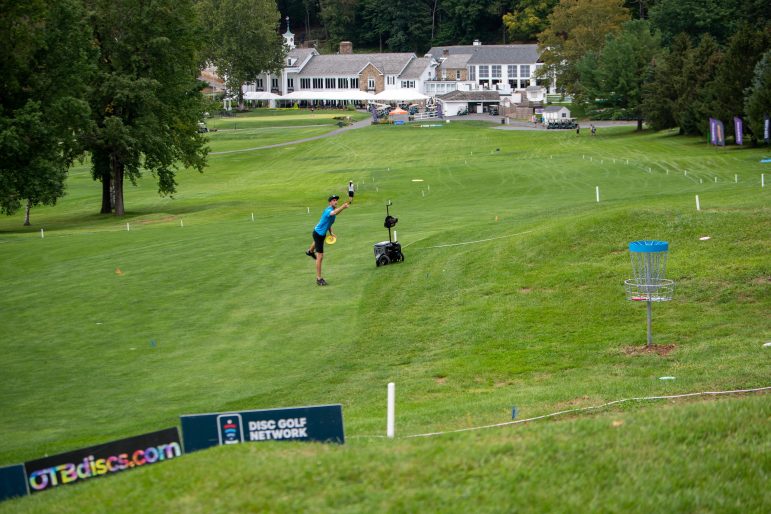 Professional disc golfer Ricky Wysocki attempts a putt on hole 1 during a Thursday practice round. The clubhouse at Steel Club can be seen in the distance.

16 of the top-ranked men’s disc golfers began playing their way through the course shortly after 10 a.m. under cloudy skies and a damp, low-70s forecast. 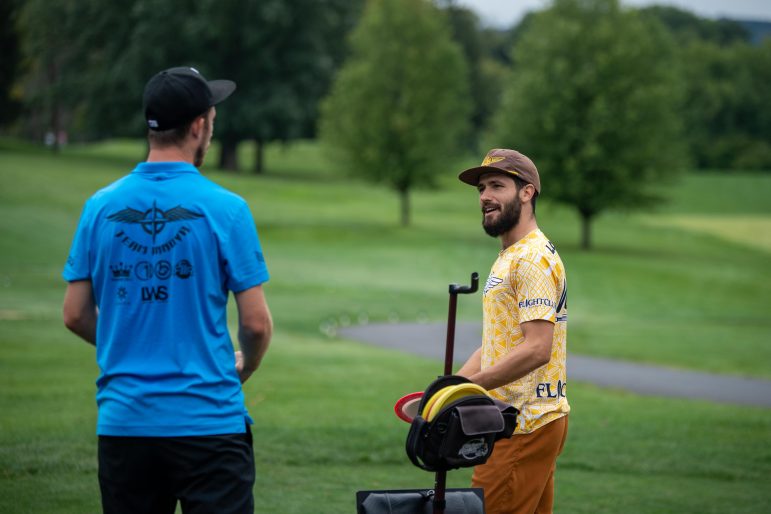 Nikko Locastro (right) and Ricky Wysocki have a chat on the practice range during Thursday’s practice round. Locastro will advance to the second round following a victory over Gavin Rathbun Friday morning.

The tournament is being conducted under a match play format, meaning the 16 golfers will compete in one-on-one matchups, with the winners advancing through the bracket.

The action will conclude on Sunday with the men’s and women’s final four and championship rounds at 10 a.m. and 2 p.m., respectively. 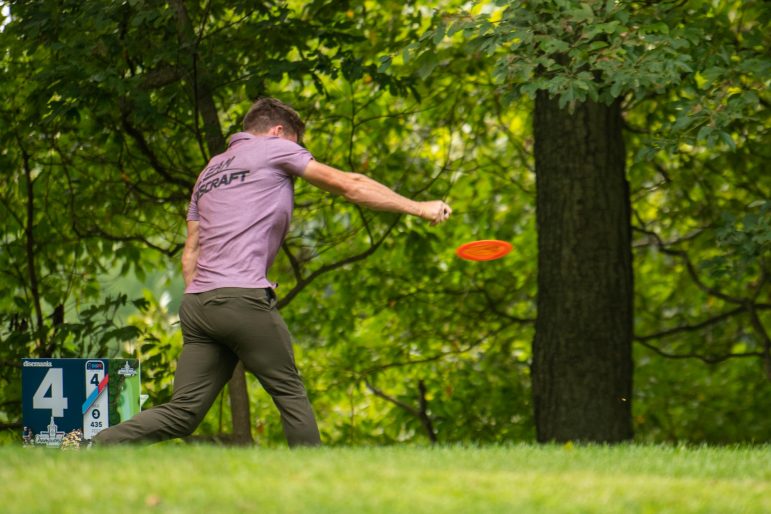 Ezra Aderhold rips a backhand tee shot on hole 4 during a practice round on Thursday. Aderhold would lose to Adam Hammes during their first round matchup on Friday.

The tournament is being played on a special, 12-hole championship layout that was designed in part by Steve Braud, Steel Club’s disc golf professional. The layout takes golfers and spectators through and alongside various holes belonging to Steel Club’s golf course.

The professional disc golfers could be seen teeing off for hole one just a few hundred feet away from Steel Club members teeing off to start their morning rounds on the golf course.

Calvin Heimburg SMASHED this upshot. He's got the early lead in his Round 1 match against @ClemonadeDD. ⚔️

The DGPT-provided spectator map can help guests navigate the course, and the caddie book gives an in-depth breakdown of each hole.

Subscribers to the Disc Golf Network can follow the action live all weekend.

Be sure to also follow the Disc Golf Pro Tour on Twitter for coverage, highlights and live updates throughout the tournament. 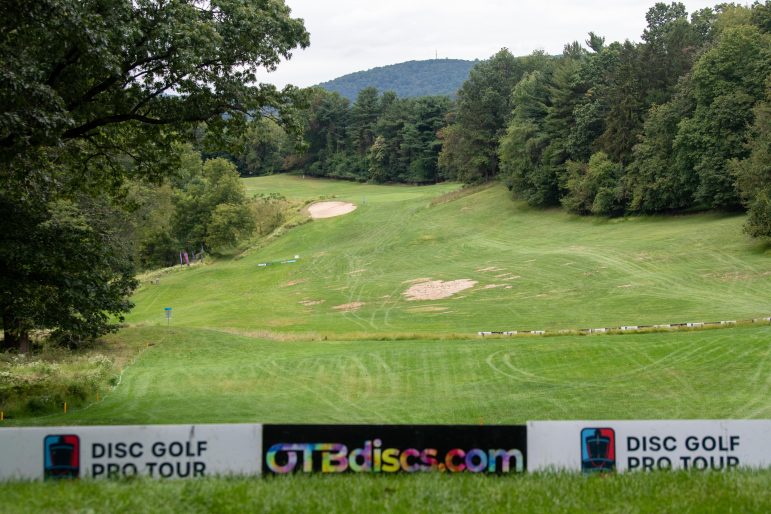 The view overlooking the par-3 6th hole and the par-4 7th hole. This weekend’s event is being played on a special 12-hole championship layout.