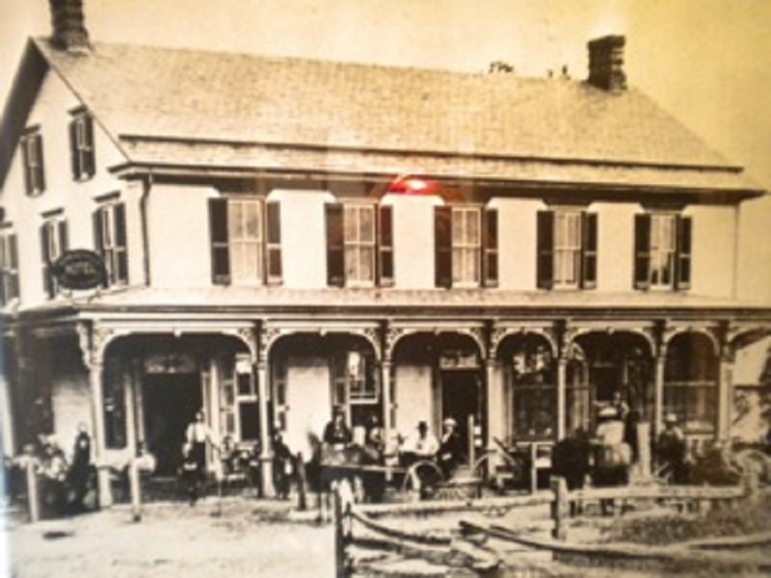 An early photograph of the Hanoverville Roadhouse in Bethlehem Township depicts its large front porch filled with guests, some of whom have apparently never left.

The Lehigh Valley has no shortage of bars and restaurants housed in historic buildings, many of which enjoy excellent reputations as dining destinations. Most of the eateries profiled below are in business and have operated for generations, and in some cases they have apparently done so with a little help from “spirits,” both literal and figurative. 👻

Legends of haunted establishments abound in our area, which is why we’re highlighting eight of them this Halloween. We hope that you’ll not only investigate their purported paranormal associations, but also dine with them and support them as local businesses.

Of course, there are many restaurants besides those listed below with creepy backstories.

Feel free to tell us about them, and visit them for festive Halloween fun and great food.

For the full story on each of the restaurants listed below, please check out my interview on Saucon Source’s No Rain Date podcast, Episode 76 (release date: Oct. 15, 2021).

The former King George Inn is located in the Dorneyville section of South Whitehall Township, at 3141 Hamilton Blvd., Allentown. A renowned dining destination in its day, the oldest section of the inn building dates from around 1755, when the surrounding area was little more than wilderness. In its early years it functioned as a center for the fledgling frontier community, and it was during this period that it was attacked by Native Americans, during the French and Indian War. According to legend, the attackers killed most of the patrons inside the inn, including a young mother and her baby. They allegedly threw the baby down a cistern (throwing bodies into wells was done to contaminate the water supply). Over the ensuing centuries, visitors to the inn have claimed to hear a baby crying near where the cistern was located. The King George Inn narrowly escaped the wrecking ball after it closed its doors in 2012. According to a May 2020 Morning Call story, under plans approved by South Whitehall Township commissioners the inn building will be restored in conjunction with the redevelopment of the surrounding property, where a bank, hotel and pharmacy are slated to be built.

The Sun Inn, at 564 Main Street, Bethlehem, has a long and illustrious history. Built in 1758, nearly two decades before the signing of the Declaration of Independence, the fortress-like stone building accommodated many legendary patriots of that era, including George Washington, Benjamin Franklin, Alexander Hamilton and John Hancock. Greatly expanded and architecturally altered over the years, by 1971 the inn had fallen into disrepair and was on the verge of being demolished. Thanks to the efforts of an early advocate for preserving Bethlehem’s historic resources, Hughetta Bender, the Sun Inn Preservation Association was founded and work to return the building to its Colonial-era appearance commenced. The popular show Ghost Hunters visted the Sun Inn in 2011, and filmed inside it for its “Christmas episode.” The team from GH were in search of evidence of a little girl who reportedly resides in the inn’s attic, and what they found–or rather, heard–were footsteps upstairs and what sounded like a little girl’s voice. Using their devices, they recorded some electronic voice phenomena (EVPs) of a girl giggling and registered some thermal readings where the girl was apparently sitting. Reopened to the public following its restoration in the 1980s, today the Sun Inn is home to a tavern and museum, and its courtyard functions as an important public space in the city.

Built in 1825 as a stagecoach stop, the Hanoverville Roadhouse is located at 5001 Hanoverville Road, Bethlehem. Over the past two centuries, the building has become a local landmark, at various times housing a post office, a general store, a biker bar and even a brothel. Today it is home to a highly-rated restaurant–and apparently the ghost of a young boy. People who have seen the boy say he looks very sad, often standing with his head down. The boy is said to tap people on their leg or arms and has come to visit the owner, who lives in the building, at night. The Hanoverville Roadhouse was investigated by Ghost Hunters, who heard a young child’s whimpers and some footsteps during their stay. The team concluded that the ghost boy at the Roadhouse may very well be a residual apparition, since they could not make contact with him during their investigation and the boy tends not to act or give attention to visitors. The current owners of the inn have embraced their building’s spooky reputation, and regularly host Halloween-themed events that are planned around it. To learn more about them, along with the colorful history of the Hanoverville Roadhouse, visit the inn’s website.

Before it was Braveheart Highland Pub, this building was home to the Hellertown Hotel, and before that, the Eagle Hotel, which was built circa 1907. The investigators from City Lights Paranormal Society have declared it “haunted,” and it’s possible that the individual doing the haunting was someone who once sought refuge in the building. Employees over the years have also reported hearing voices, and a female apparition is said to have been seen wandering the property. In the restaurant area, this apparition was reported by the society’s investigators to have been seen walking into a wall and disappearing. It was later found out that a doorway used to be in the section of wall that she walked through. After sitting vacant for a number of years, the building was purchased by local entrepreneur Andy Lee, who turned it into an authentic Scottish pub. Opened in December 2006, Braveheart has become a favorite destination for dinner and drinks in the borough over the past 15 years. It is located at 430 Main Street, Hellertown.