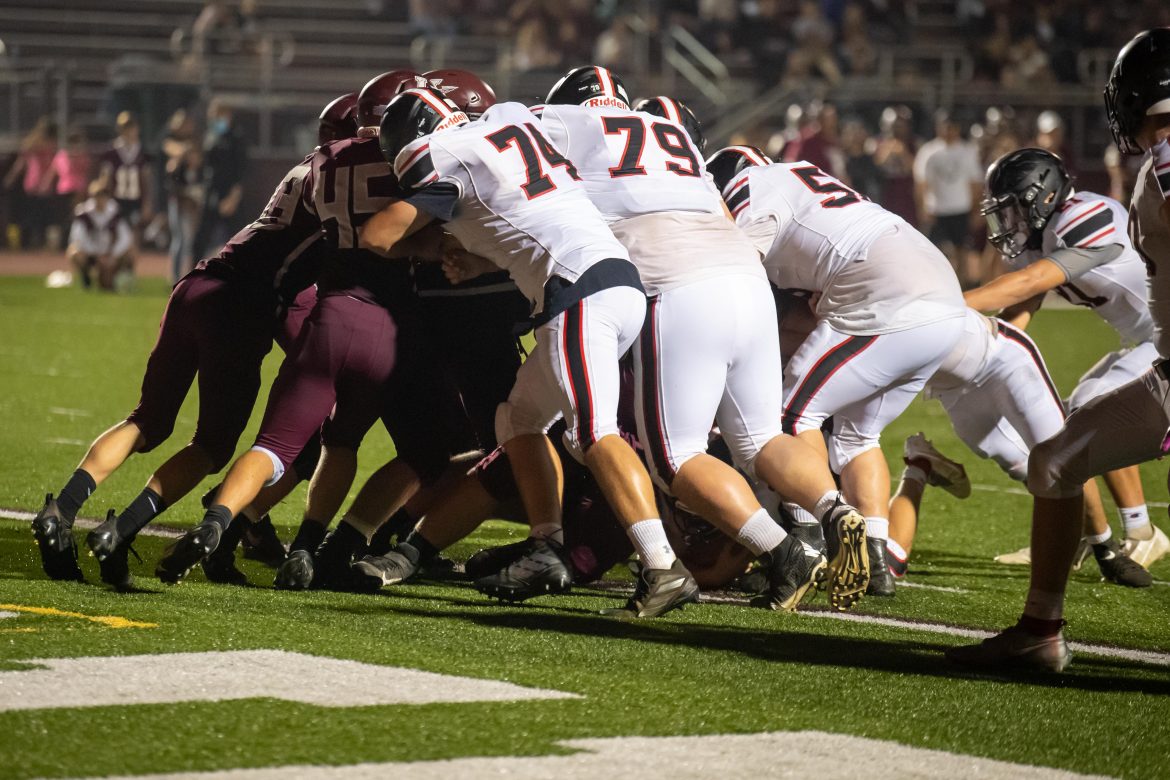 It wasn’t easy on Friday night for the Saucon Valley Panthers against the Lehighton Indians.

On Friday night the Saucon Valley Panthers loaded the bus and made the trip to Lehighton for a clash with the Indians.  The 3-4 Panthers were looking to get their record to even, while Lehighton was hoping to secure their second win of the season. Weather-wise, it proved to be a a beautiful night for football.  Excitement-wise, it was a highly entertaining competition. Injury-wise it proved costly as the Panthers lost the talents of Dante Mahaffey, Jared Rohn and Jack Marouchoc.

After receiving the opening kickoff, the Lehighton offense started the game from their own 9-yardline.  The Indians engineered a masterful and methodical 16-play drive that ended with a fumble at the Panther 18-yardline.  Saucon Valley used eighteen plays to march back the other way but fumbled the ball away at the Lehighton 1-yardline.  The first quarter was not with out big plays, however.  The biggest play for the Panthers was, perhaps, on 3rd & 1 from midfield when Dante Mahaffey was injured picking up a first-down on a QB sneak.  Mahaffey spent the remainder of the game on the sidelines leaning on crutches. Nonetheless, after about a quarter-and-a-half of play, the two teams were still scoreless. 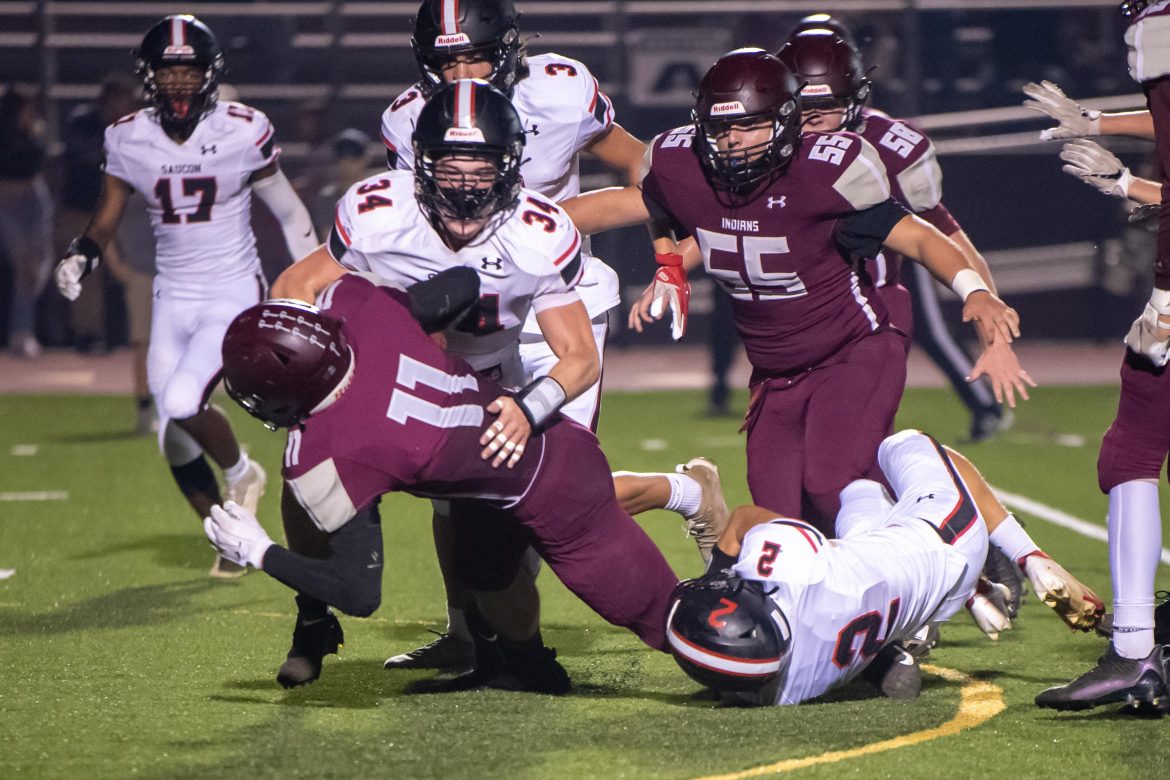 The Panther defense stepped up for a few key stops against the Lehighton Indians.

On their second possession, the Indians were forced to punt after six plays.  Saucon Valley then returned the favor after being forced into a three-and-out-punt situation.  However, the Indian punt return was mishandled and fumbled allowing the Panthers to pounce on the loose ball at the Lehighton 15-yardline.  Six plays later with :54 seconds until halftime, Saucon Valley backup quarterback, Travis Riefenstahl, hit sophomore Braden Weiss on a slant in the endzone for a touchdown. Jacob Christopher secured the PAT and with less than a minute until halftime, Saucon led 7-0. 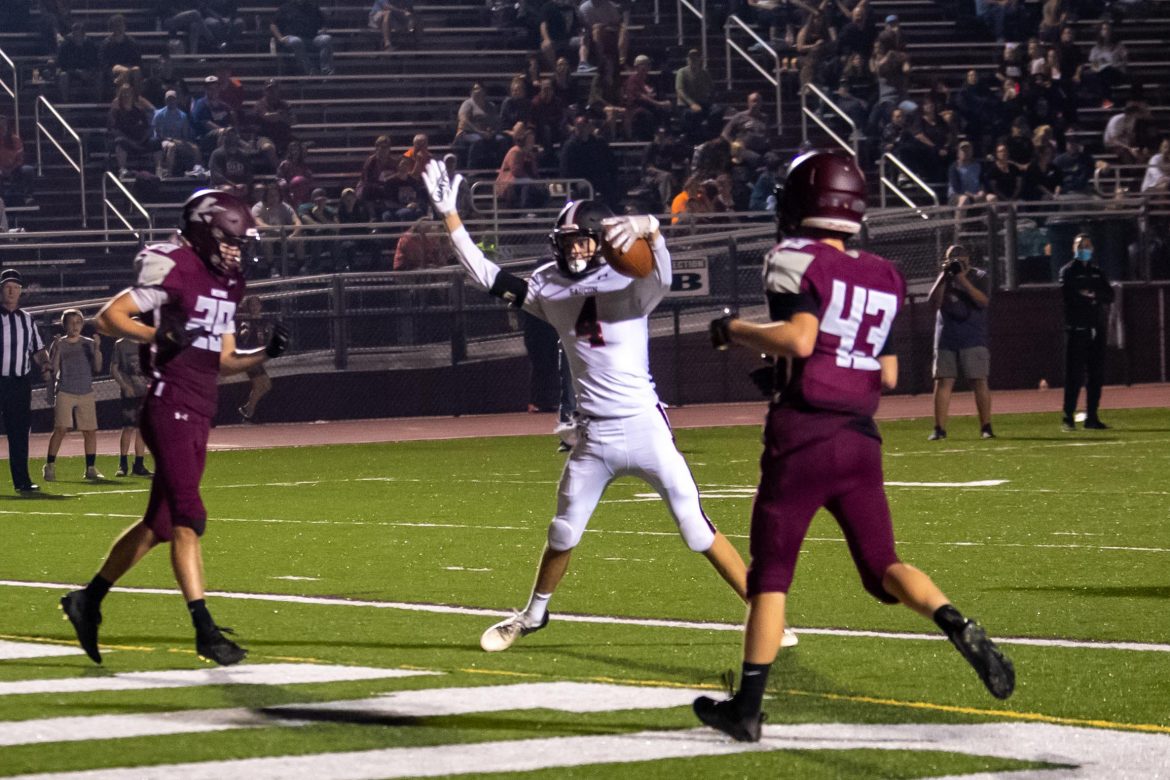 Saucon sophomore Braden Weiss reacts after his touchdown reception against the Lehighton Indians.

Lehighton made things interesting to close out the first half.  On first down from their own 25-yardline, Indian tight-end, Luke Blauch found room between Saucon’s two deep safeties.  Quarterback Brady O’Donnell hooked up with Blauch for a 35-yard gain.  Six plays later with :10 seconds left O’Donnell dropped back to pass from the Panther 12-yardline looking for points.  Saucon Valley senior Anthony Orlemann said no and picked off O’Donnell’s pass attempt off in the endzone to preserve the Panther 7-0 advantage. 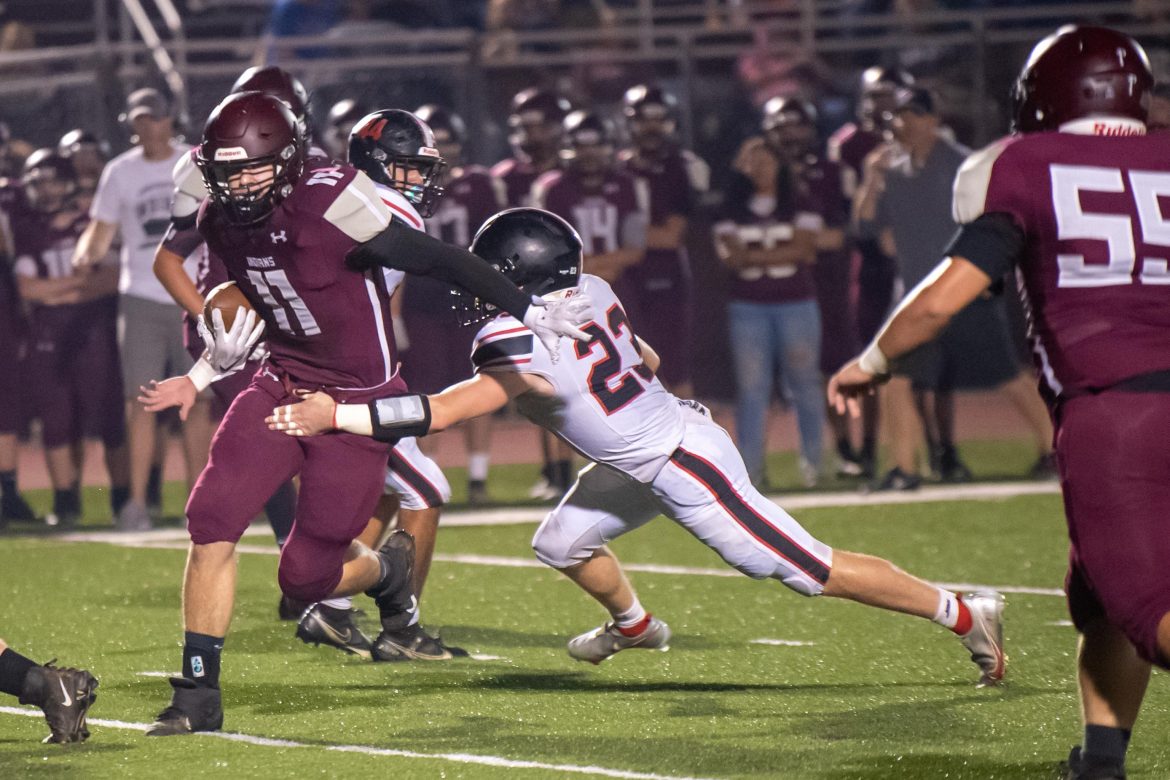 Panther freshman Jared Rohn (#23) was having a great night early against the Lehighton Indians.

The Panthers received the second-half kickoff, but after four plays turned the ball over on downs at their own 43-yardline after failing on a 4th & 1 QB sneak.  Three plays later Saucon Valley’s Jared Rohn was injured making hustle play on Lehighton’s Ian Rarick after a completed pass down to the Panther 22-yardline.  After some tense moments Rohn was helped from the field and never returned.  The Indians capitalized on all the Panther misfortune two plays later with a Brady O’Donnell 22-yard touchdown pass to Ethan Crum.  Lehighton connected on the extra-point and with 8:19 remaining in the third quarter the score was tied at 7-7.

On the following kickoff, the Indians surprised Saucon with a pooch kick recovery at the Panther 35-yardline.  The Lehighton drive never really gained any traction and,on third down, Saucon Valley freshman Jack Robertson made a diving interception at the 6-yardline to put the Panther offense back on the field.  Only two plays later Lehighton freshman outside linebacker Deven Armbruster returned the favor and more when he stepped in front of a Riefenstahl pass meant for Alex Magnotta.  Armbruster’s ‘Pick-6’ and the following PAT gave the Indians a 14-7 lead with just under six minutes left in the third period. 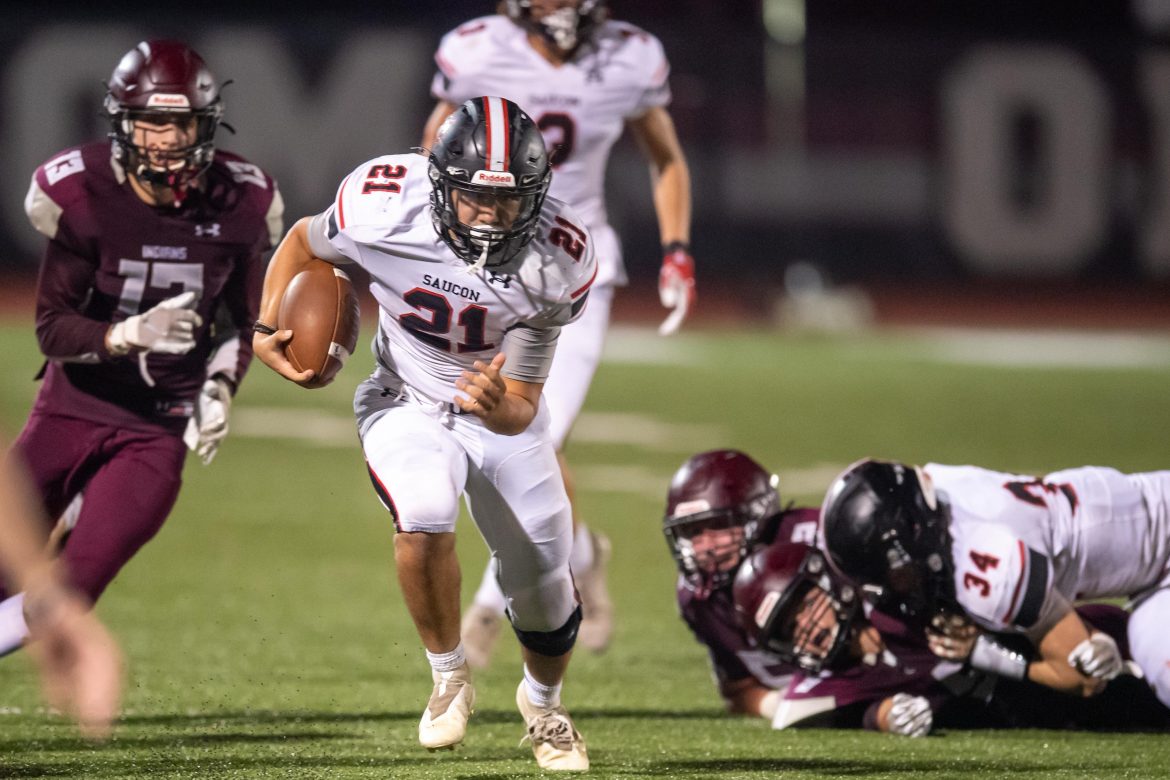 A good dose of Damian Garcia was just what the doctor ordered in third quarter action against the Lehighton Indians.

The Panthers came back and hit Lehighton with a dose of Damian Garcia. On two consecutive run plays, Garcia picked up 45-yards.  Riefenstahl added nine more to set up a 1st & Goal from just inside the 10-yardline. The Saucon Valley drive, however, stalled as the Indian defense forced the Panthers to turn the ball over on downs.

The Panther defense answered forcing a three-and-out-punt that Ty Csencsits was able to return to the Lehighton 30-yardline.  Another 15-yards due to an unsportsmanlike conduct penalty against the Indians was tacked on to set Saucon up 1st & 10 at the Lehighton 15-yardline.  Garcia pounded his way on first-down for 6-yards, but otherwise the Panthers were stuffed on the next two pass attempts.  On 4th & 4 from the 9-yardline, Riefenstahl broke contain and scrambled into the endzone for a touchdown.  With 11:40 left on the game clock, the teams were knotted 14-14. 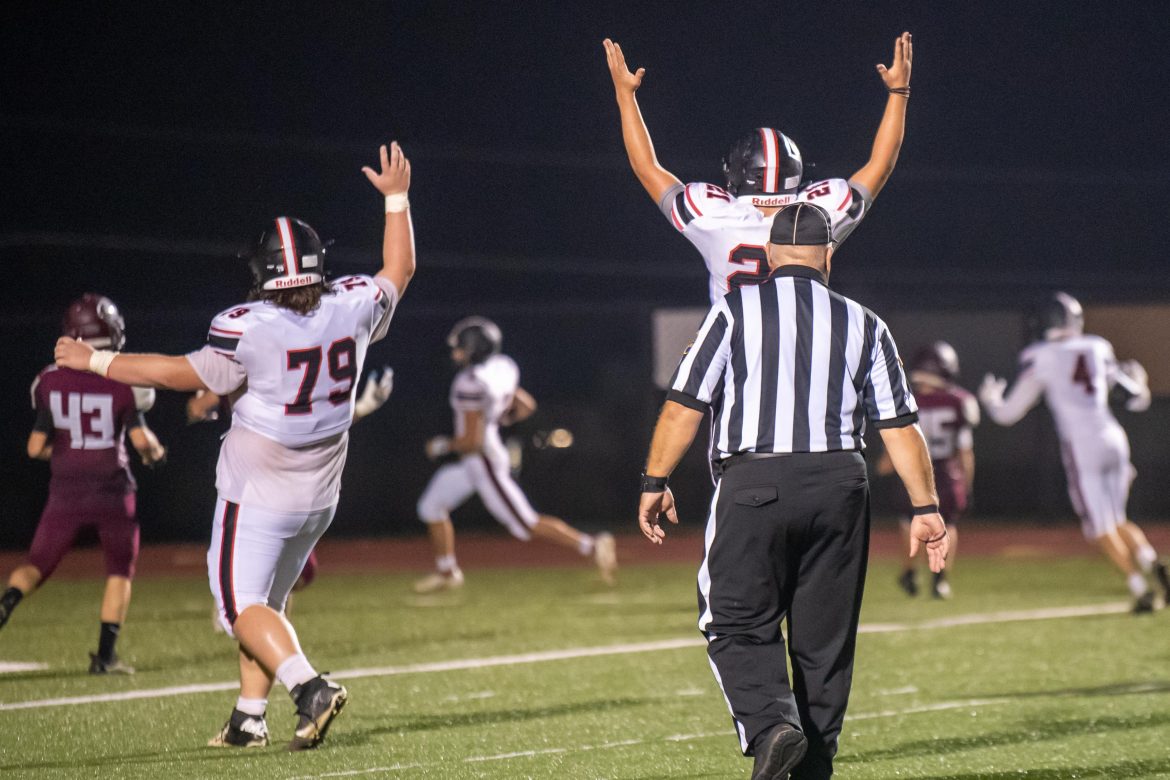 The Panthers celebrate as Travis Riefenstahl scrambles his way into the endzone.

After exchanging punts, Lehighton revved up their offense to pursue a game-winning drive. On 1st & 10,  O’Donnell dropped back to pass from his own 30-yardline looking for his tightend in the short flat area.  Jack Robertson was all over it and secured his second interception of the game.  This time Robertson returned the pick down to the Indian 1-yardline.  The Panthers pounded the ball in for a touchdown with Riefenstahl running QB sneak.  Christopher’s PAT was good, but the Panthers were whistled for an illegal formation.  Following the 5-yard penalty, Saucon re-kicked, but a high snap led to Christopher clanking his attempt no-good off the goalpost upright.  During the re-kick, Panther lineman Jack Marouchoc’s night ended when he went down with an injury and had to be assisted off the field. With 2:50 remaining in the ballgame Saucon Valley led 20-14. 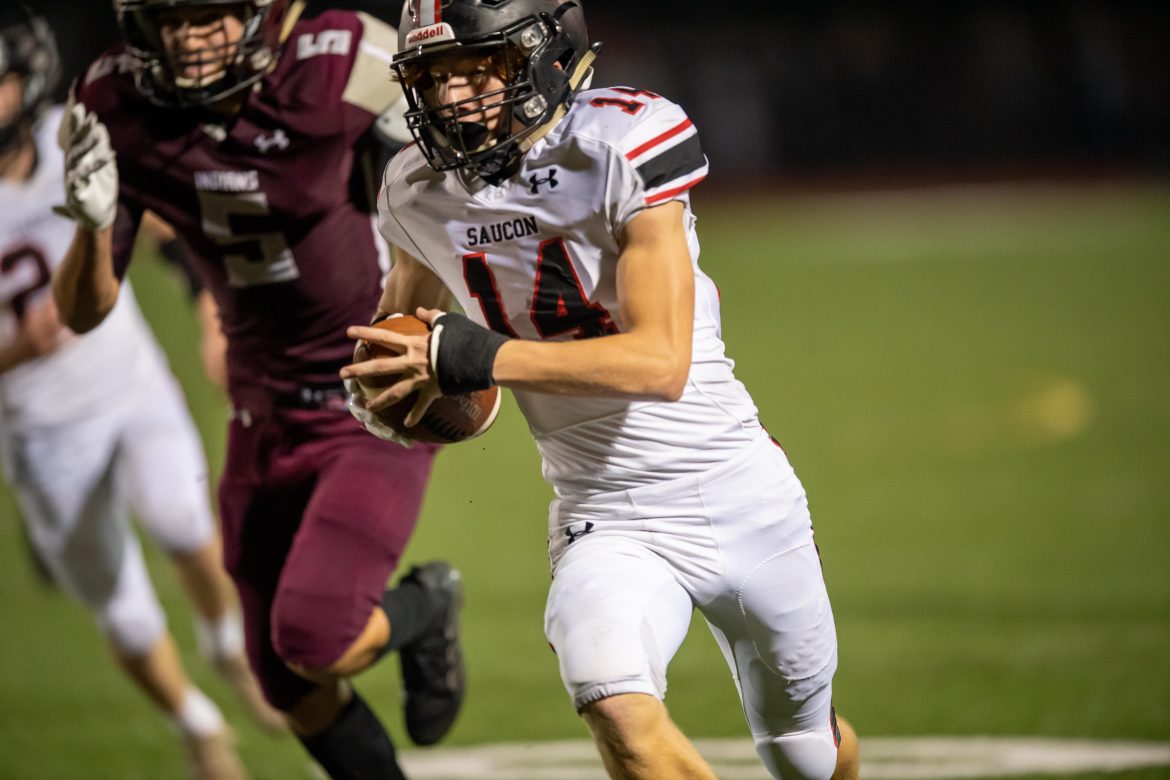 Saucon Valley freshman Jack Robertson (#14) trying to take his second interception of the night to the House.

Lehighton desperately pushed the ball all the way down to the Panther 20-yardline, but on 4th & 15 with :30 seconds to go, Ty Csencsits knocked O’Donell’s pass attempt to Ethan Buchert aside and to the ground.  Saucon Valley held on to defeat the Lehighton Indians 20-14.  It certainly came at a steep price, but with the win, the Panthers improve to 4-4.  Lehighton falls to 1-7. 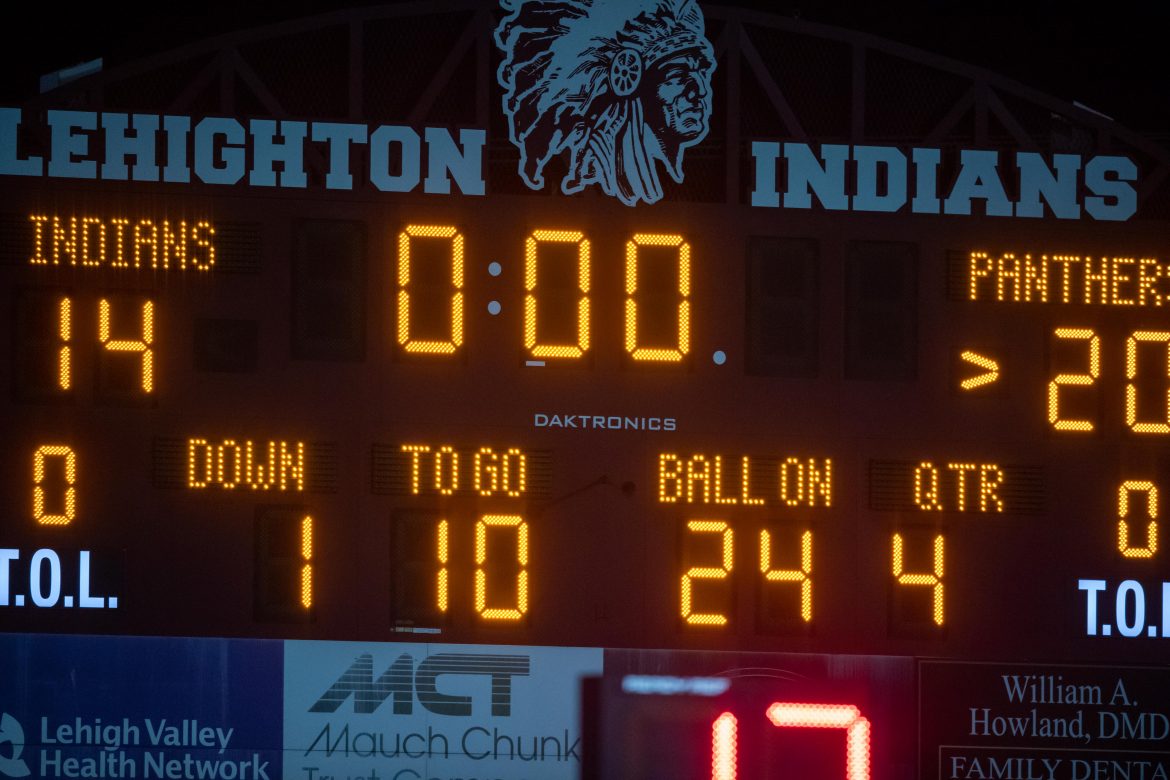 UP NEXT:  Saucon Valley (4-4) will limp home for a battle against the undefeated Northwestern Lehigh Tigers (8-0). This Friday night football fight is scheduled to kickoff at 7 p.m. 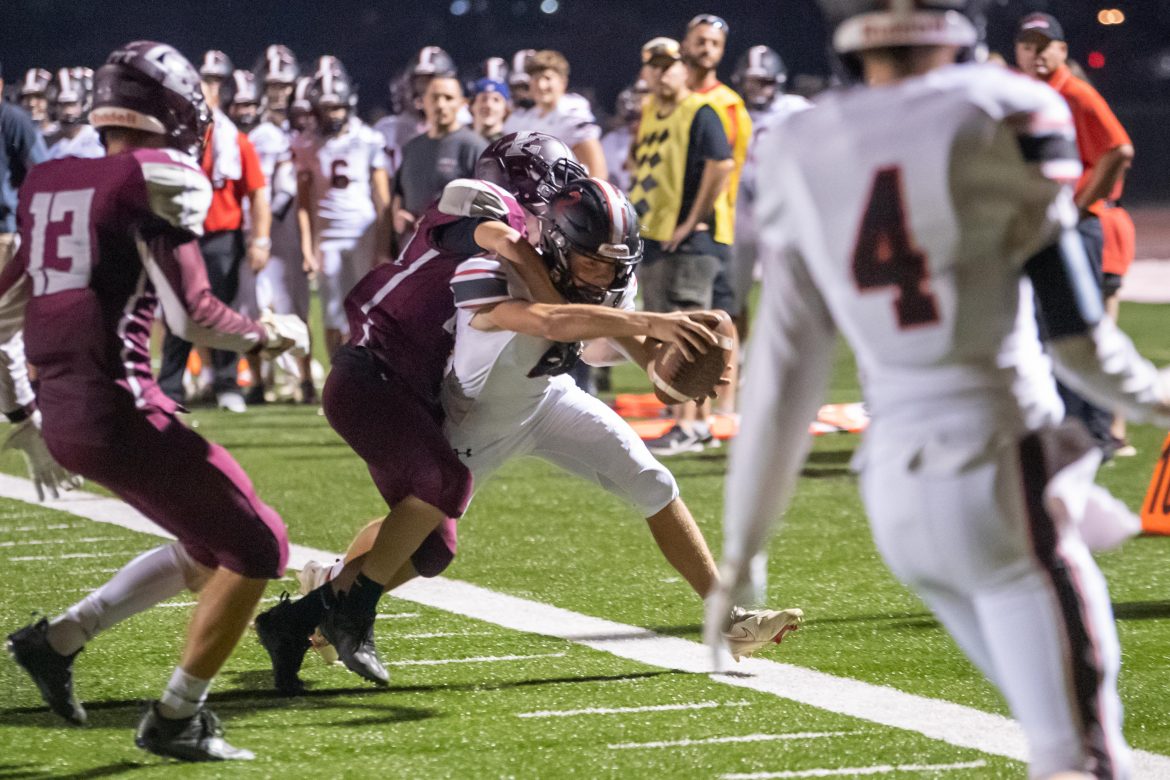 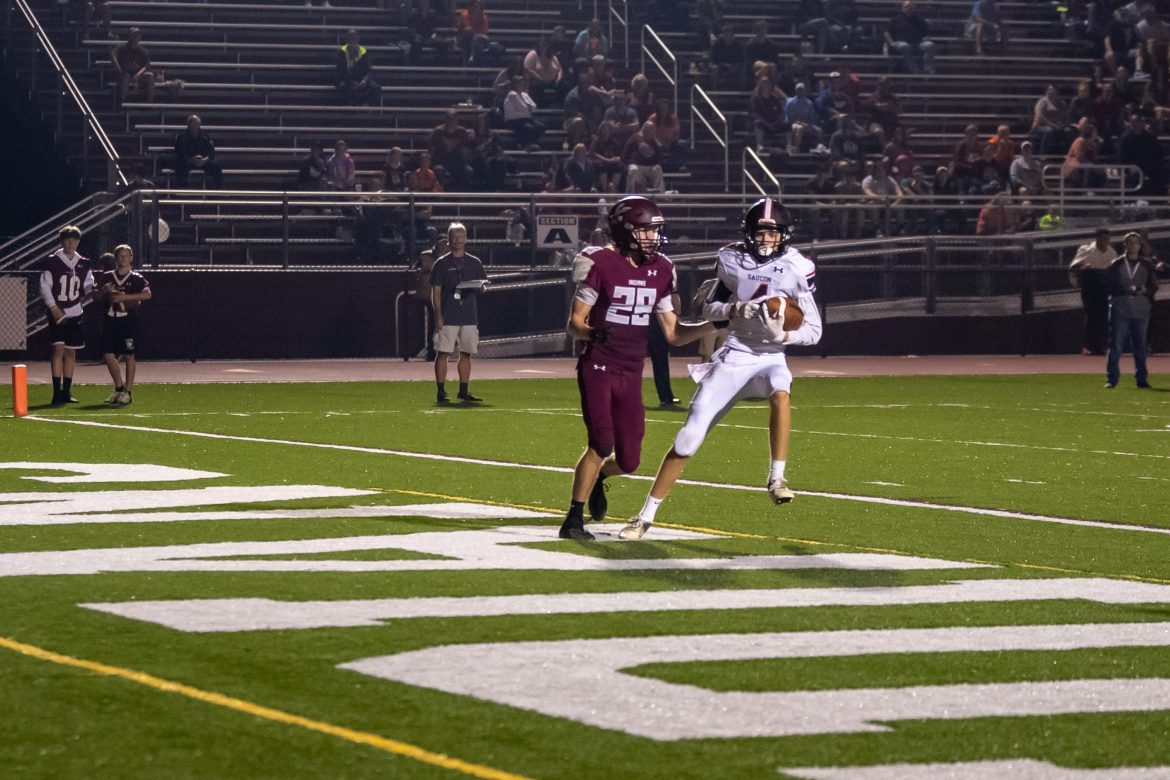 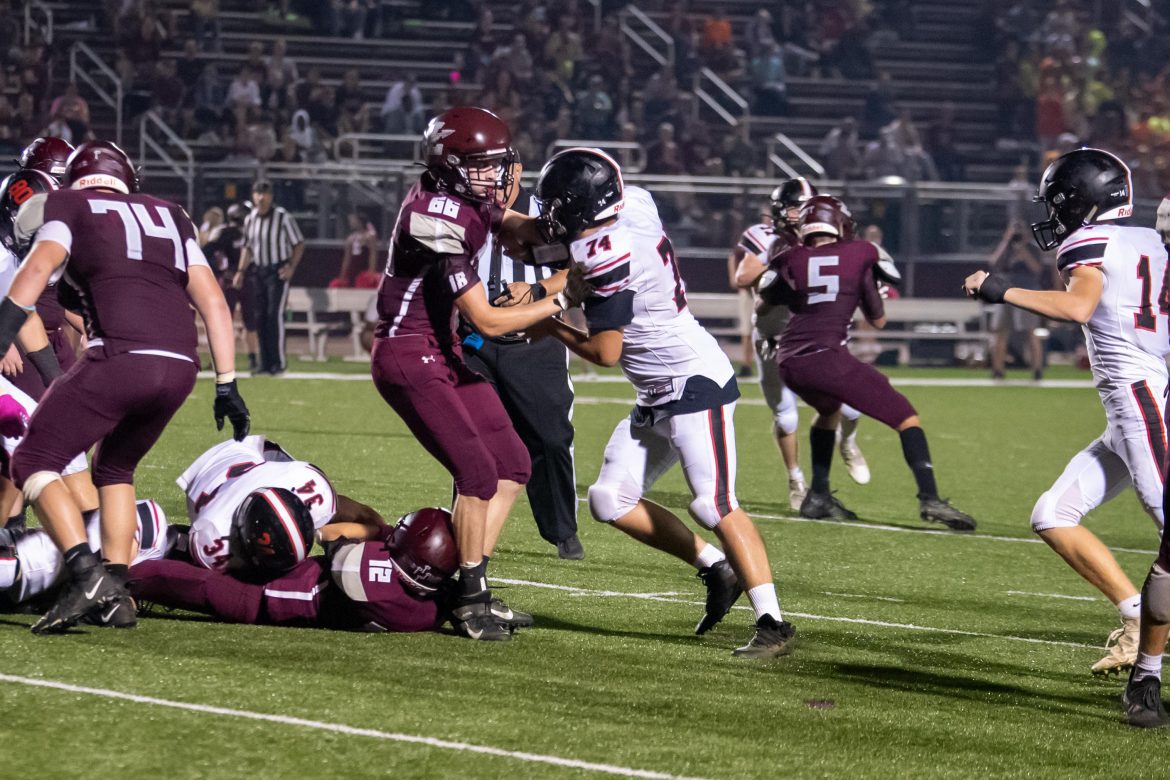 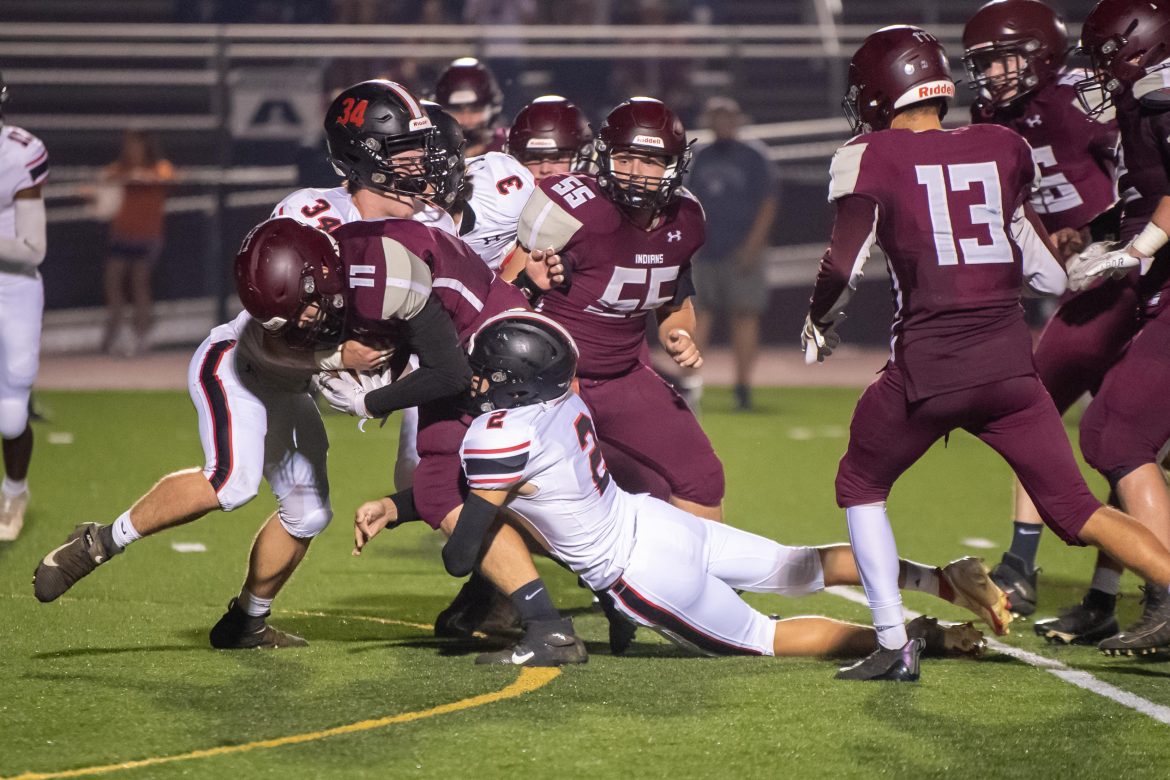 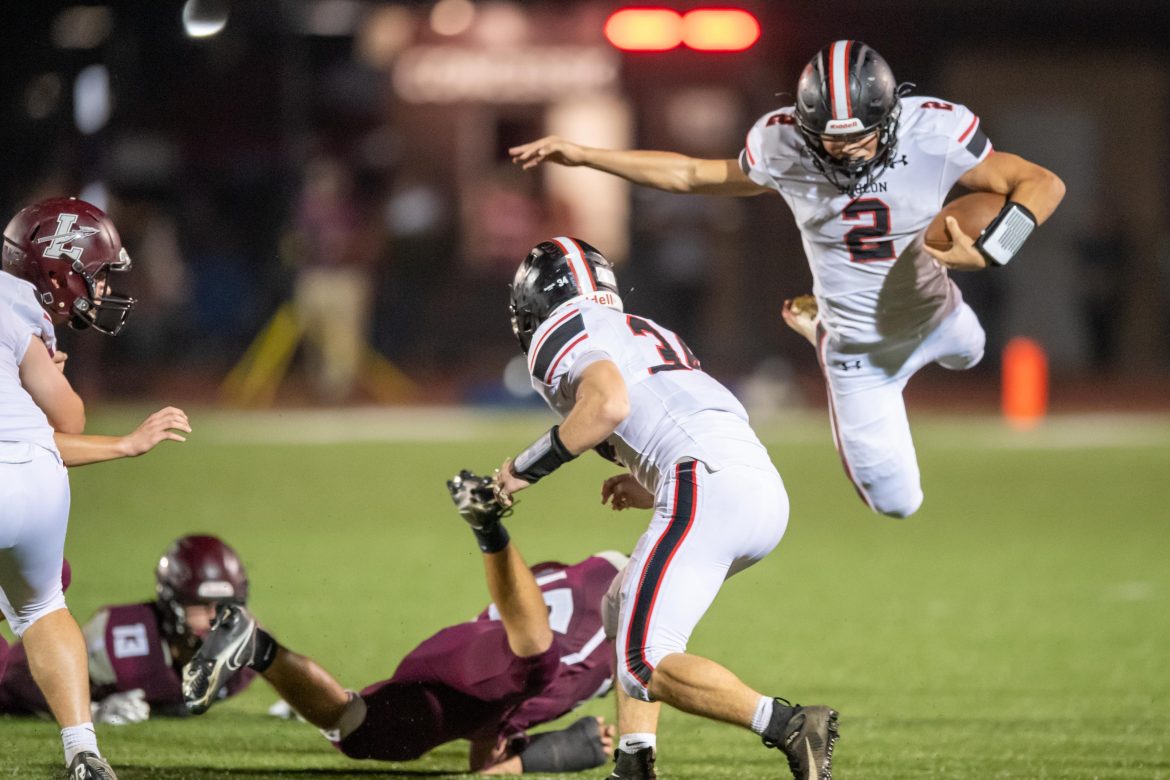 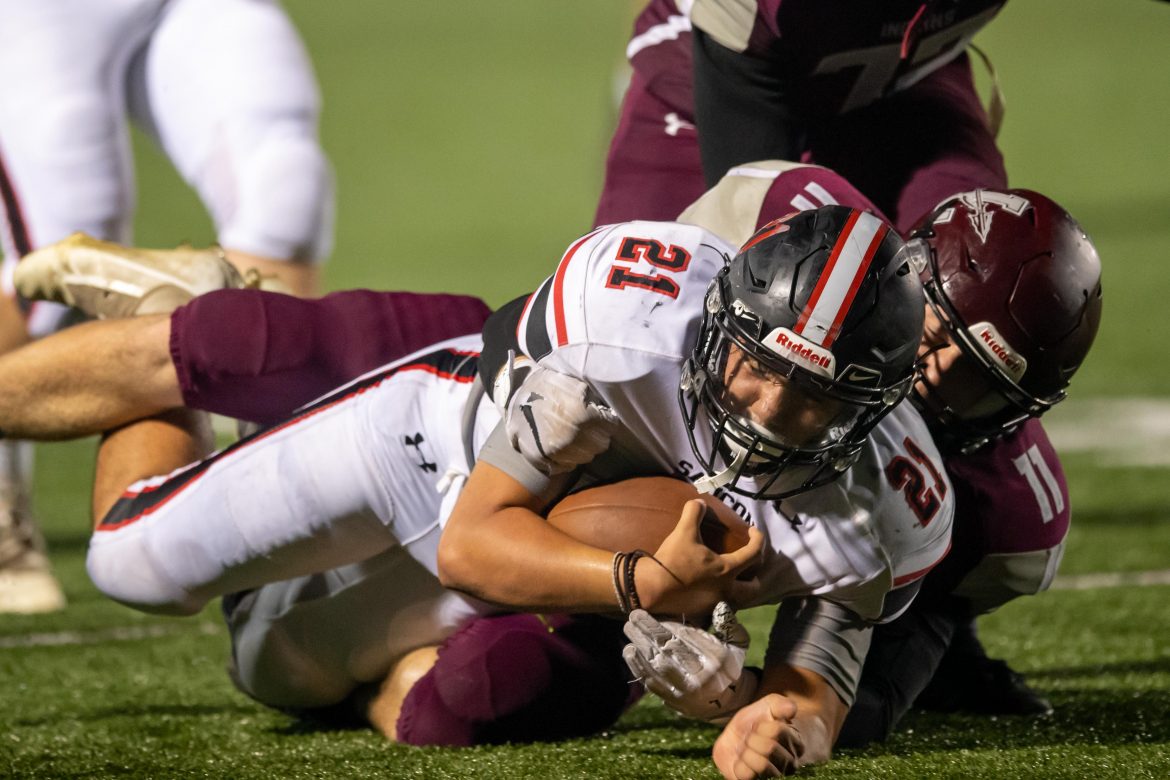 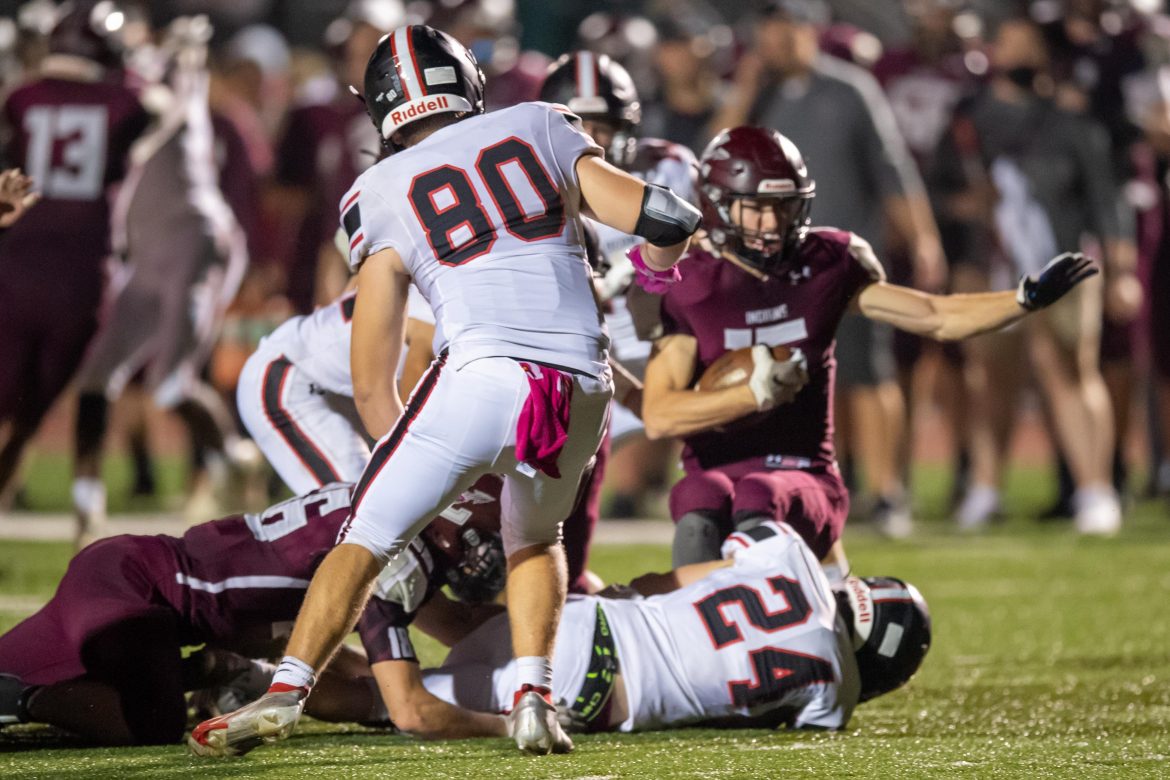 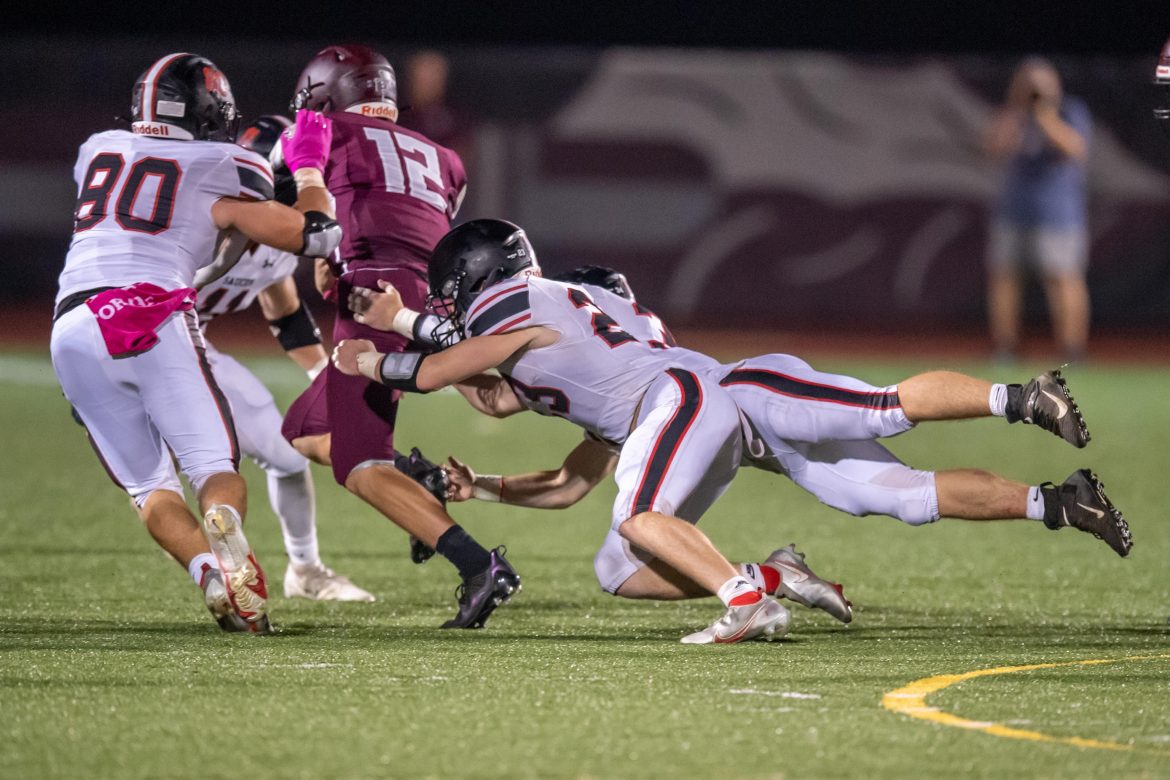 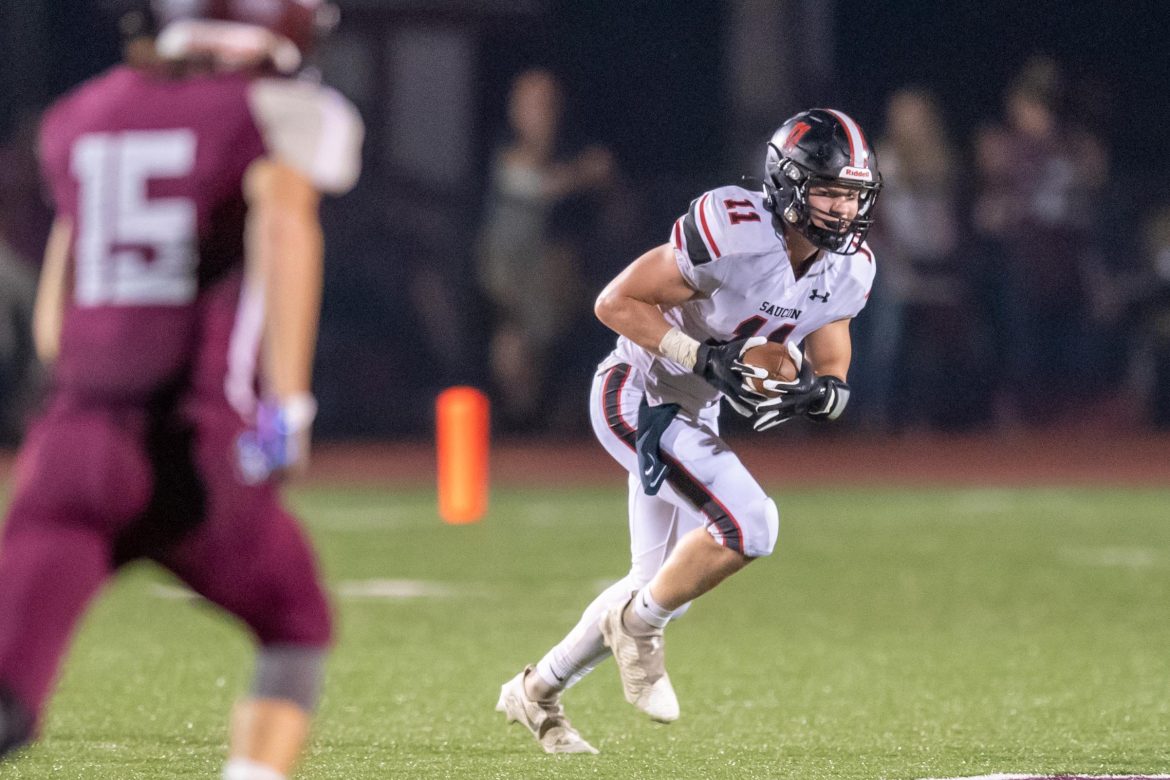 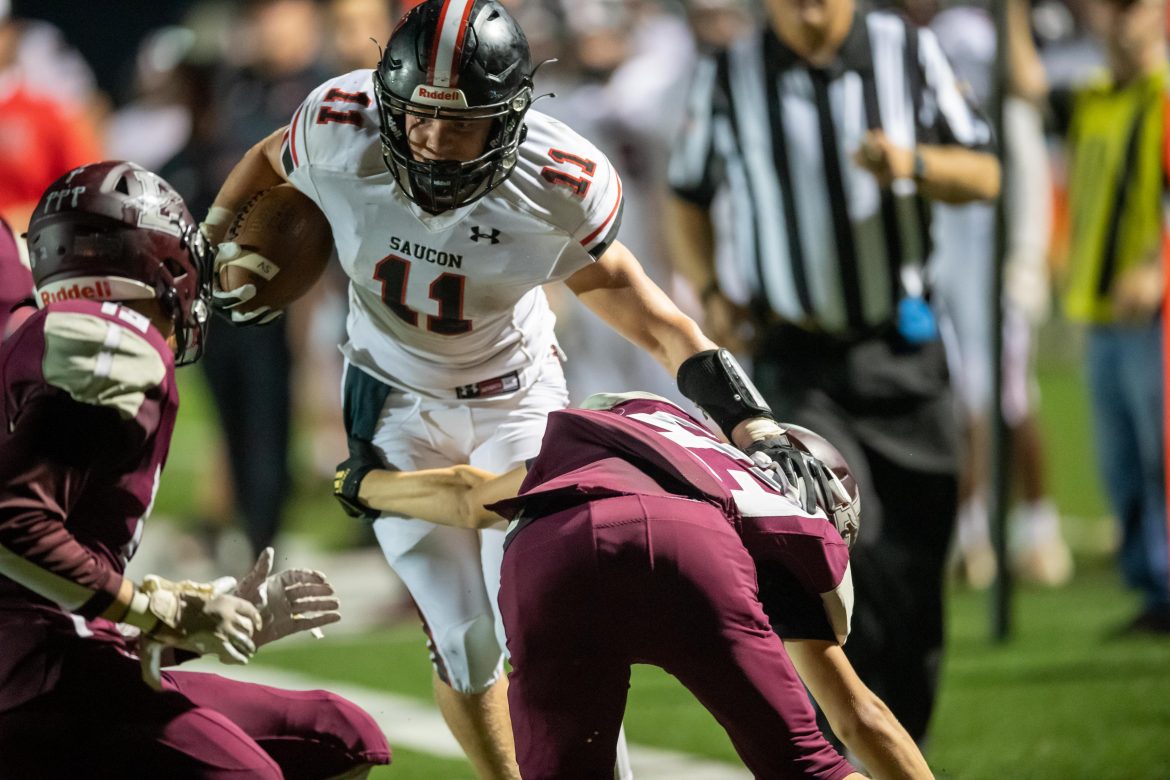 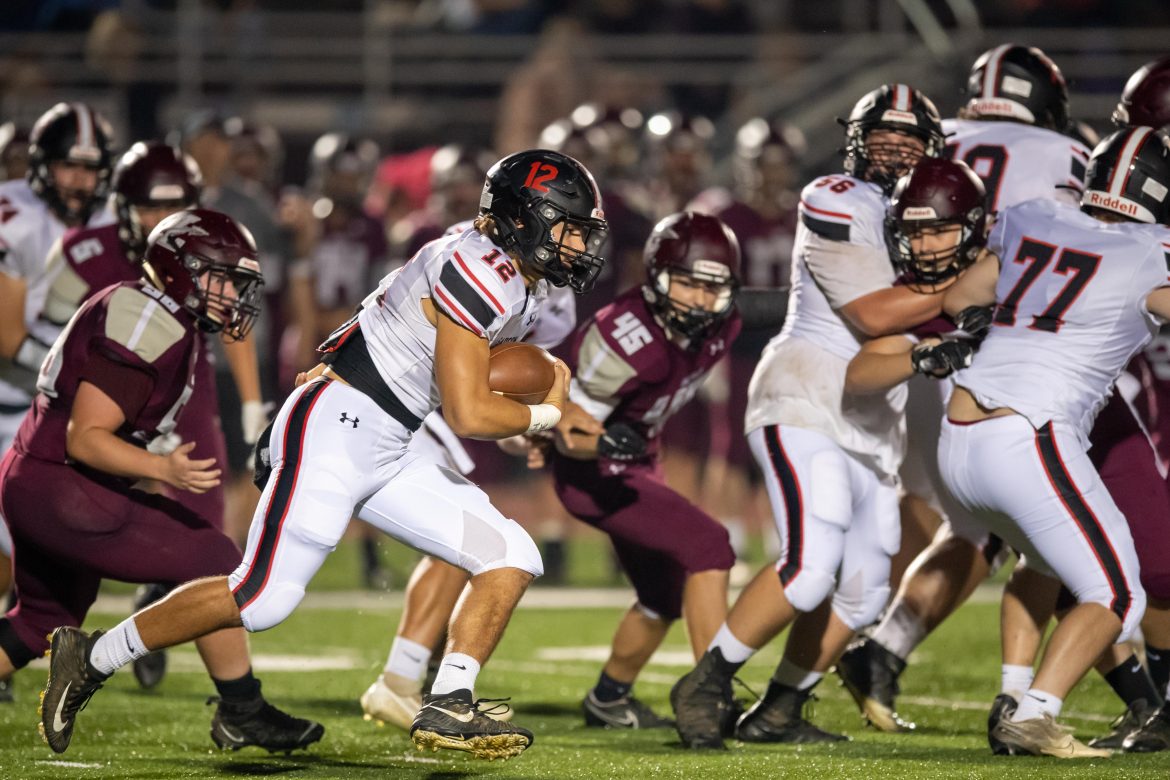 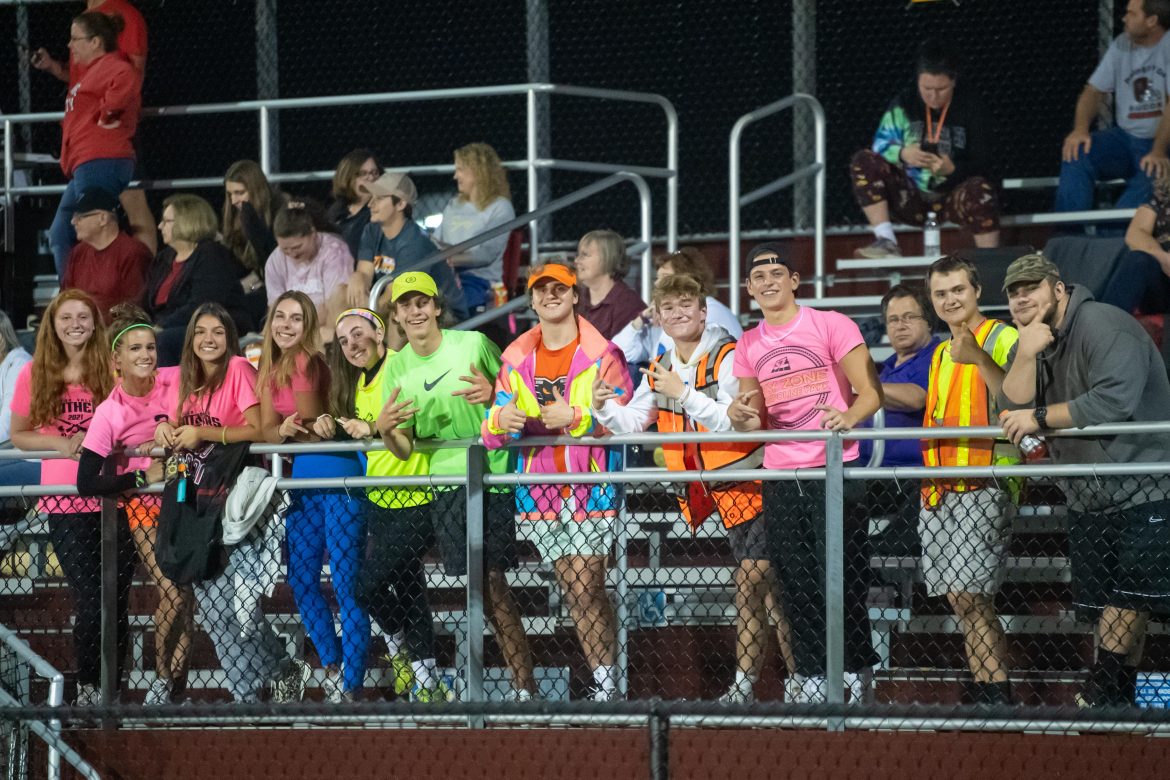 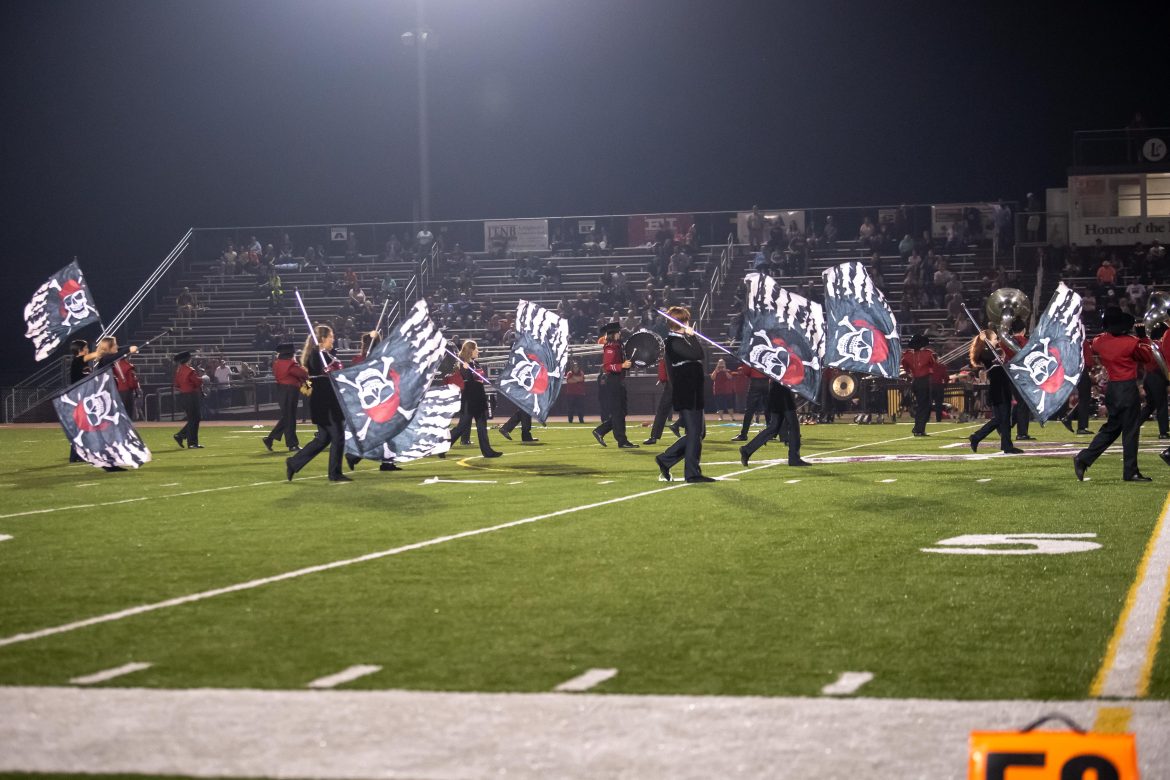