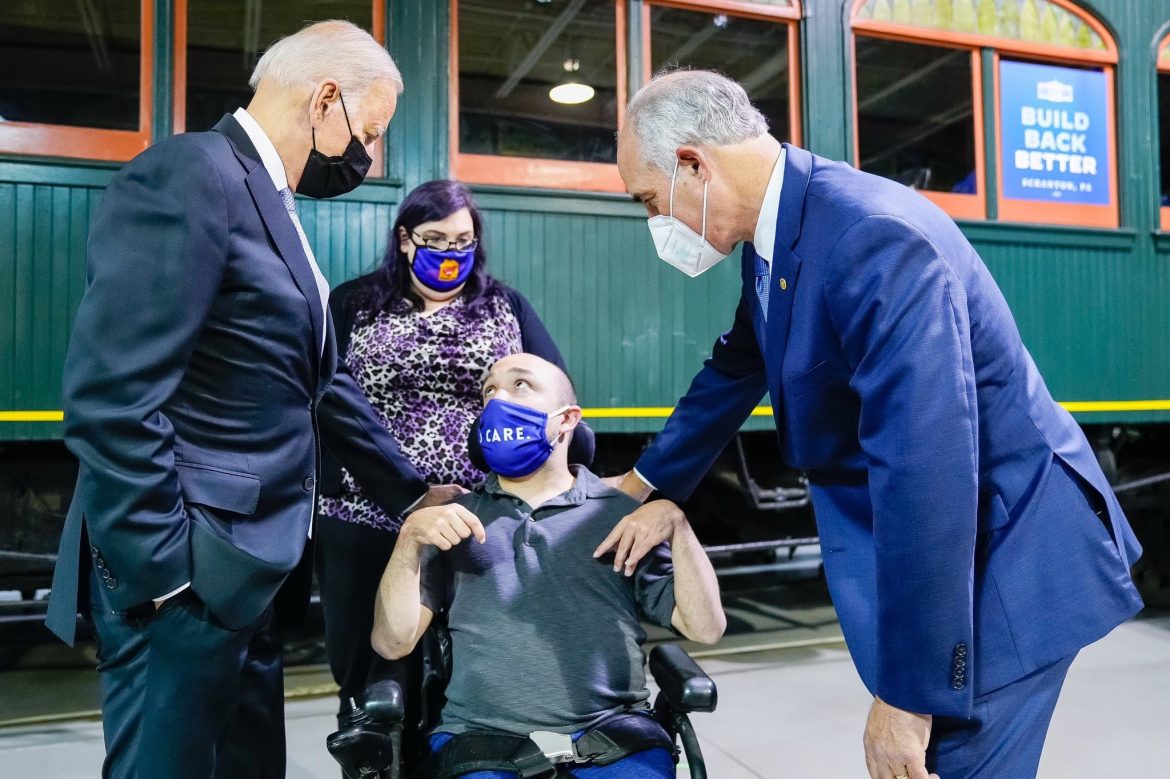 Lynn Weidner and Brandon Kingsmore have been advocating for improved conditions and wages for home care workers since late 2019. In the past two years they have worked with activists and politicians in Pennsylvania and Washington, D.C. This past October they met with President Joe Biden to discuss the challenges home care workers and their consumers face.

When 2020 began, local residents Lynn Weidner and Brandon Kingsmore were just beginning to advocate for better conditions and wages for home care workers; an issue that is near and dear to them. Nearly two years later, their advocacy work has received international media attention, thought not necessarily for the reasons they expected.

Kingsmore lives with spastic quadriplegic cerebral palsy and requires assistance for many of his daily living activities. The pair met 11 years ago, and Weidner has been his full-time home caretaker for the last nine years.

Weidner earned her certified nurse assistant license in 2003, and throughout her healthcare career she has witnessed firsthand the struggles that home care workers face, such as low wages and a lack of benefits.

“When I started working in nursing homes in 2003 I was making $13 an hour, and currently, as a home care worker (18 years later) I make twelve dollars and fifty cents,” said Weidner, who grew up in Hellertown and currently resides in Allentown.

Weidner’s salary is funded by money Kingsmore receives through Medicaid. This is referred to as the consumer-directed model of providing home care.

Despite this, Weidner was quickly drawn to the one-on-one level of care she provided as a home care worker, which she preferred to the fast-paced “conveyor belt” system she was used to in nursing homes.

“My main goal in home care is keeping people included in their communities,” Weidner said. “What I really wanted to do is advocate and improve peoples’ lives.”

“There’s not enough home care workers to take care of all the people who actually need the assistance,” she said.

More home care workers would enable more Americans to receive the medical assistance they need in an environment they prefer. A recent survey conducted by the American Advisors Group found that 90 percent of seniors prefer to remain in their homes rather than move into an assisted living facility.

Weidner’s desire to become more involved in the fight for better home care working conditions led her to UHCWP, a local chapter of Service Employees International Union (SEIU), which she joined in November 2019. With the union, Weidner said she felt like she suddenly had a voice to advocate for change.

“As a home care worker you don’t really feel like people will listen to you. If you went to talk to your representative, they would sort of pat you on your head and send you on your way,” she said. “Suddenly I have a whole group of people behind me and a whole bunch of home care workers who also have the same issues, so it’s like this community where we support each other and we’re advocating to the highest level that we possibly can.”

From the beginning, Weidner said Kingsmore has also been heavily involved in advocating for improvements in the home care field.

“Brandon has been with me there one hundred percent,” she said. “He has an amazing story and an amazing ability to connect with people.”

Their advocacy work earned Weidner an invitation to a roundtable hosted by U.S. Sen. Bob Casey (D-PA) in January 2020. Those in attendance rallied support for the Affordable Care Act, which some home care workers rely on for health insurance.

Shortly after the event, the COVID-19 pandemic’s sweeping effects were felt across the world. Home care workers, Weidner said, were hit especially hard by the pandemic. She explained that much of the support that other healthcare workers have received throughout the pandemic is not provided for home care workers.

“We’re now healthcare workers working in a pandemic, but we don’t have benefits. We don’t even have PPE a lot of the time,” she said. “I have to buy gloves for myself from Sam’s Club, and then there’s a run on gloves. So, now I can’t buy gloves, and I have to work with bodily fluids with my bare hands.”

Weidner and Kingsmore continued to advocate in response to the adversity.

They also had conversations with Ai-jen Poo, Director of the National Domestic Workers Alliance (NDWA), a movement dedicated to uniting and empowering domestic workers such as nannies, housecleaners and home care workers.

Weidner and Kingsmore attended a rally at the U.S. Capitol on Sept. 23 organized by the SEIU, NDWA and the American Association of People with Disabilities. The rally, called “Care Can’t Wait,” was in support of federal investment to create union care jobs, expand access to home care and address racial and gender injustice experienced by caregivers.

That's a wrap! As care workers, our demands are clear: INVEST IN CARE!

“We’ve been talking with all of these activists and doing all of these press conferences for months,” Weidner said. “That’s what led up to us being able to have the opportunity to meet the President in Scranton.”

President Joe Biden visited his hometown of Scranton on Oct. 20 to rally public support for the Build Back Better Act, a large spending bill that includes a variety of programs designed to aid working Americans. The framework for the bill includes a $150 billion investment in the home care industry.

Sen. Casey invited the pair to Scranton, where they got to speak with the President.

“(The President) and Brandon had this connection. I don’t even know how to explain that,” Weidner said. “Brandon was telling him how people with disabilities rely on home care, and the home care workers are so important to his life.”

The pair were invited back for a photo opportunity with the President, where they shared more stories about their advocacy.

“I got nervous and (Brandon) was cool as a cucumber, but it was really an amazing experience,” Weidner said. 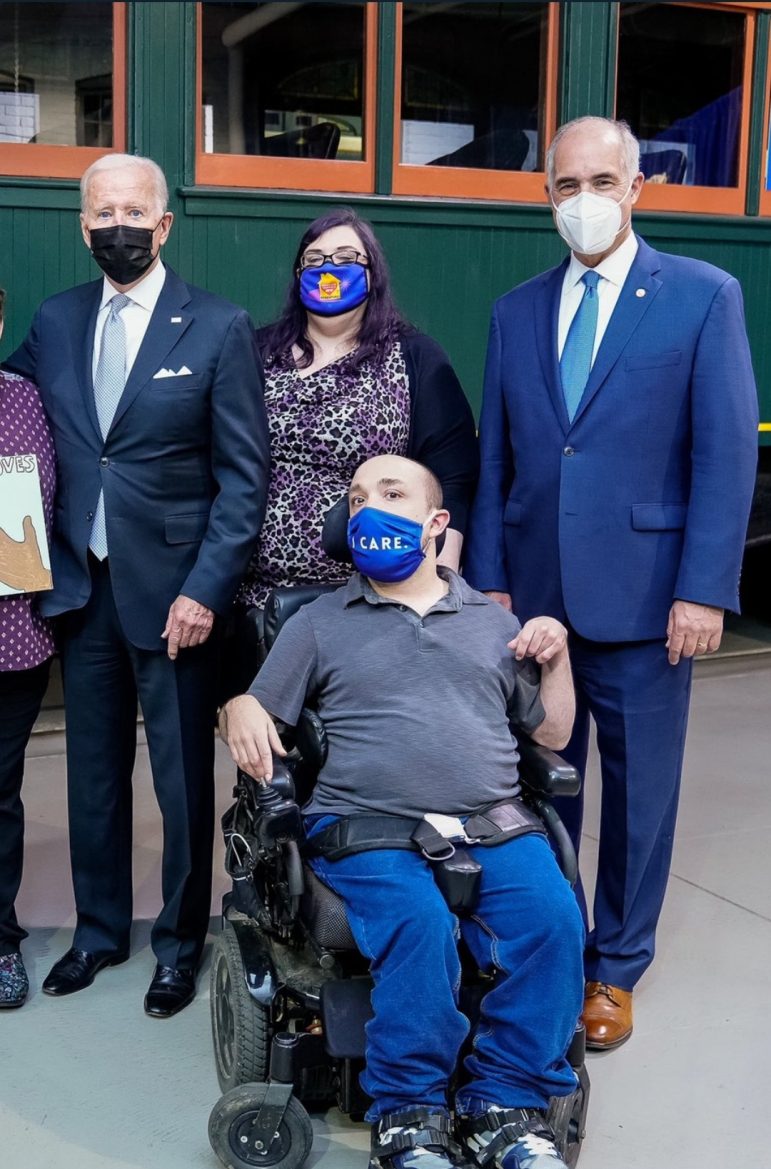 Weidner and Kingsmore were invited to meet with President Joe Biden during his visit to Scranton in October. Shortly after the event, the internet questioned if the meeting was planned in response to the pro-Trump ‘Let’s go Brandon’ meme.

Something Weidner and Kingsmore did not anticipate was the subsequent media attention their visit with the President would garner.

In the weeks leading up to their visit, the phrase “Let’s go Brandon” became a popular euphemism meaning “f— Joe Biden.” The meme originated from an Oct. 2 NASCAR event, where a reporter mistook fans chanting the vulgar phrase for saying “Let’s go Brandon.”

The phrase has since been spreading on and off the internet, where it has appeared on a variety of merchandise, including t-shirts and flags.

Republican Senator Ted Cruz (R-TX) was captured saying the phrase during a World Series game last month, and a Southwest Airlines pilot used the phrase while addressing passengers before a flight out of Houston on Oct. 29.

After the official POTUS Twitter account tweeted a video of Kingsmore speaking with the President on Oct. 22, many internet users thought the meeting between Biden and a man named Brandon was an orchestrated response to the growing meme.

I’m fighting every day to pass my Build Back Better Agenda for folks like Brandon. His story is like so many I’ve heard across the country. Folks are just looking for a fighting chance and to be treated with the dignity they deserve – and that’s what my agenda is all about. pic.twitter.com/GFm9AShbEe

Later that day online news publications, such as British online newspaper The Independent, published stories speculating whether the meeting was in response to the viral meme.

“I did not expect the publicity afterwards,” Weidner said. “I don’t think any of us did.”

“I had heard about (the phrase), but it was such in passing that I didn’t really think about ‘Oh his name is Brandon’ and ‘Let’s go Brandon is a thing,’” she continued.

Weidner then began to notice condescending comments made in response to the tweet. She said she saw comments alleging that Kingsmore was being manipulated and held hostage, and that they were invited to Scranton as a way for the President to “get rid” of the viral meme.

“I was responding to them like, ‘you’re downplaying all of the work that we did to get to this point,’” Weidner said. “Brandon is not just some kid in a wheelchair, you know? He’s a grown man who has been working hard to advocate.”

Not all of the interactions were negative, Weidner said. One Twitter user, a girl from the UK, direct messaged her about the advocacy work she and Kingsmore have been doing. Weidner said the girl had no idea about the struggles home care workers in America were facing.

In fact, Weidner said the publicity the tweet attracted was helping to shine a larger spotlight on the very issues she and Kingsmore had been advocating to change.

“I feel like the people trolling ‘Let’s go Brandon,’ their intention was to make Biden look bad, but what it really did was make more of a highlight on Brandon and his role in home care advocacy, and how important home care is, because many more people saw that,” she said.

Weidner and Kingsmore’s advocacy work is far from complete. While the inclusion of home care investment in the Build Back Better agenda is seen by many as a positive step forward, others feel it does not sufficiently address the concerns of home care workers and their consumers.

Biden’s administration originally proposed a $400 billion investment in home care as part of their American Jobs Plan (AJP). Many of the initiatives included in the framework for the AJP have instead been incorporated into the bipartisan infrastructure bill and Build Back Better Act, where that investment has already been significantly trimmed down to $150 billion.

It remains to be seen how much of that $150 billion investment remains after the bill’s agenda is deliberated upon by members of the House of Representatives and the Senate.

“While we celebrate the work we’ve done thus far, we know it’s far from over,” said Matthew Yarnell, President of SEIU Healthcare Pennsylvania.

Part of Weidner and Kingsmore’s latest advocacy efforts have been directed towards securing pandemic relief funds for home care workers. Weidner said the Pennsylvania Department of Human Services was given money through the American Rescue Plan, but that money has not yet been released to home care workers.

“We are waiting and waiting for that money, and we need to put pressure on our representatives,” she said. “Anybody who can, call your representatives and tell them why home and community-based services are important and why they believe that this money should be allocated for us.”