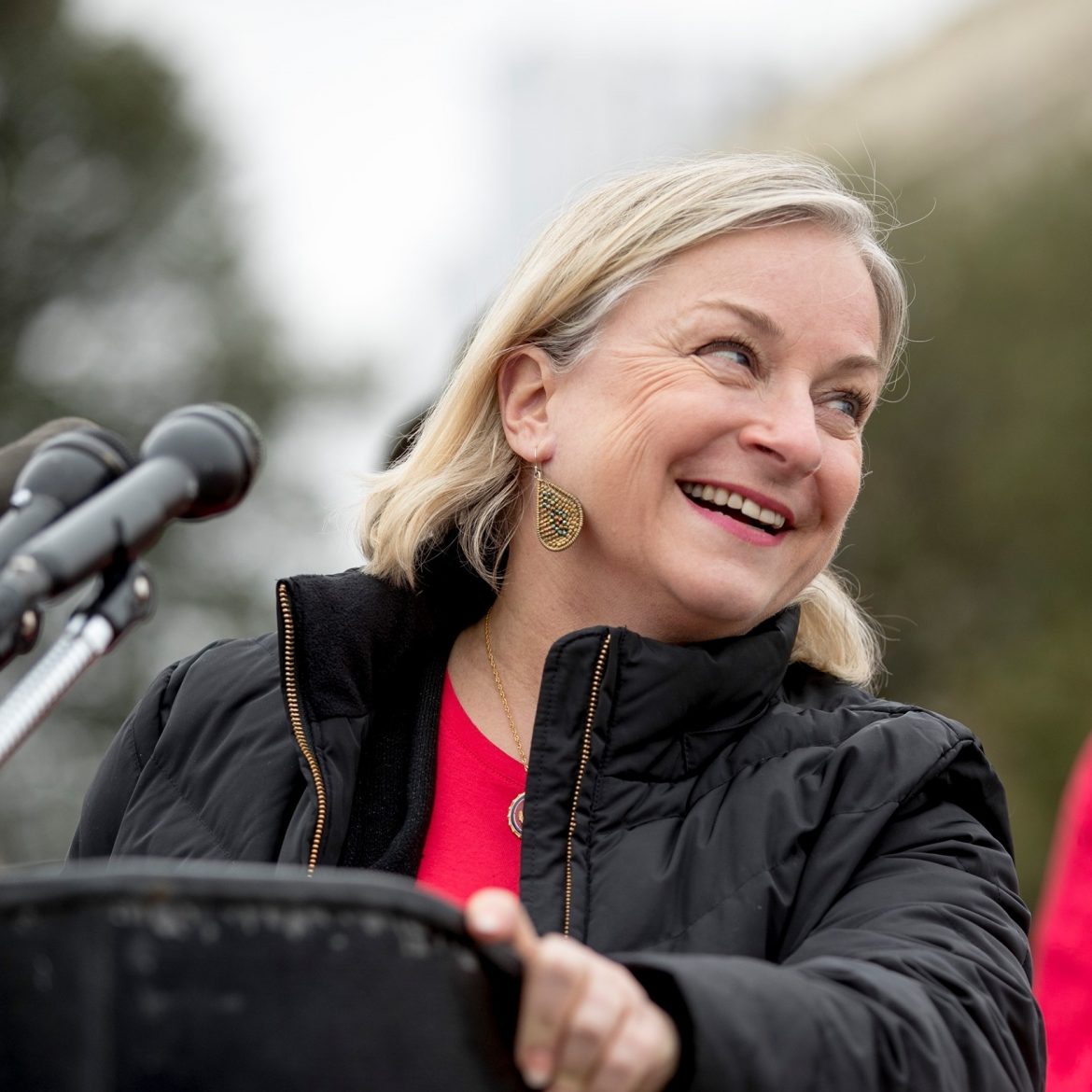 Editor’s Note: As of Friday, Nov. 5, Democrats in Congress were poised to vote on President Joe Biden’s $555 billion infrastructure bill and to begin debate on the $1.75 trillion Build Back Better bill, according to an NBC News report.

Lehigh Valley Congresswoman Susan Wild is supportive of the framework for the Biden administration’s proposed Build Back Better Act, which was presented to the Democratic Congressional caucus last week.

The bill, which comes with a $1.75 trillion price tag, includes programs designed to aid the American middle class.

The White House has been talking up the bill using monumental terms. For example, according to the administration it includes the most significant investment in children and caregivers in generations, the largest effort to combat climate change in American history, the biggest expansion of affordable health care coverage in a decade and the most significant effort to bring down costs and strengthen the middle class in decades.

Republican critics counter that the bill extends government overreach, and that it would damage the American economy.

“Trillions of dollars in spending, major expansions of government agencies and even more inflation that will lead to higher costs for all Americans, those are all on the table,” House GOP leader Kevin McCarthy (R-CA) said of the bill last week. “When the White House rushes out a framework hours before the president comes to the Hill, you know they are desperate and just grasping at straws.”

According to the Biden administration, the programs proposed by the bill would be fully funded by asking more of large, profitable corporations, as well as the richest Americans.

That would be achieved, in part, by repealing a Trump-era tax rebate, which the bill’s supporters say provided a “windfall” to wealthy Americans and large corporations.

Passage of the White House’s version of the Build Better Act would result in a 15 percent minimum tax being levied on businesses with more than $1 billion in reported profits as well as an income surtax being paid by the wealthiest 0.02 percent of Americans.

That version also calls for taxing corporations that ship jobs and profits overseas, closing the Medicare tax loophole and funding additional enforcement of tax laws by the IRS.

In total, the White House estimates offsets of roughly $2 trillion via these efforts; enough to fund the $1.75 trillion price tag.

“Under this historic agreement, nobody earning less than $400,000 per year will pay a penny more in taxes,” the White House website states.

U.S. Rep. Susan Wild (D-7) says she is excited about the positive impact the programs included in the bill would have on many residents of her congressional district, which includes all of Lehigh and Northampton counties as well as parts of Monroe County.

“The framework overall is very good,” Wild said. “There’s a lot of great stuff in it.”

Wild said she is especially pleased with the introduction of free and universal preschool for all three and four-year-olds, which is being touted by the supporters of the BBB as the largest expansion of education since public high schools were established in the U.S.

“We have never taken on anything like that in this country,” Wild said. “It also is something that would be incredibly important in terms of getting people back to work, which I know is so important to our employers and our manufacturers in our district.” 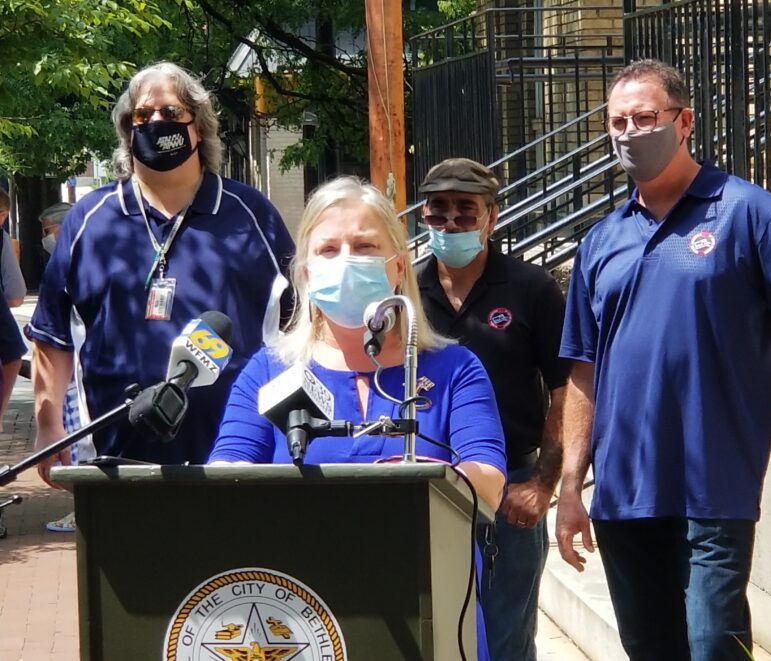 U.S. Rep. Susan Wild (D-7), who represents the Lehigh Valley in Congress, speaks at a news conference outside the Southside Bethlehem branch of the United States Postal Service in August 2020. (FILE PHOTO)

The bill would also provide relief for the oldest Americans and those living with disabilities, as well as their caretakers; something Wild said she strongly supports.

“There’s a considerable chunk of money in there for the home health care industry to make sure that our senior citizens are able to live with dignity in their homes if they so choose,” she said.

According to 2020 U.S. Census figures, about 27 percent of people living in Hellertown borough are 65 or older. That percentage is well above the national average population of seniors, which is approximately 16.9 percent, according to the U.S. Department of Health & Human Services.

According to its backers, the BBB would strengthen Medicaid coverage for home care services for seniors and people living with disabilities, as well as improve the quality of caregiving jobs.

“I’ve spent an awful lot of time with the home care workers, who have basically been working at poverty wages for way too long,” Wild said.

Weidner said she’s watched her wage drop to $12.50 an hour during her time as a home care worker, even as the demand for employees in the field has risen.

“There’s not enough home care workers to take care of all of the people who need the assistance, because, like I said, our wages are terrible,” Weidner said.

She added that she does not receive benefits from her employer and must shop for an insurance plan through Pennsylvania’s health insurance marketplace, Pennie. 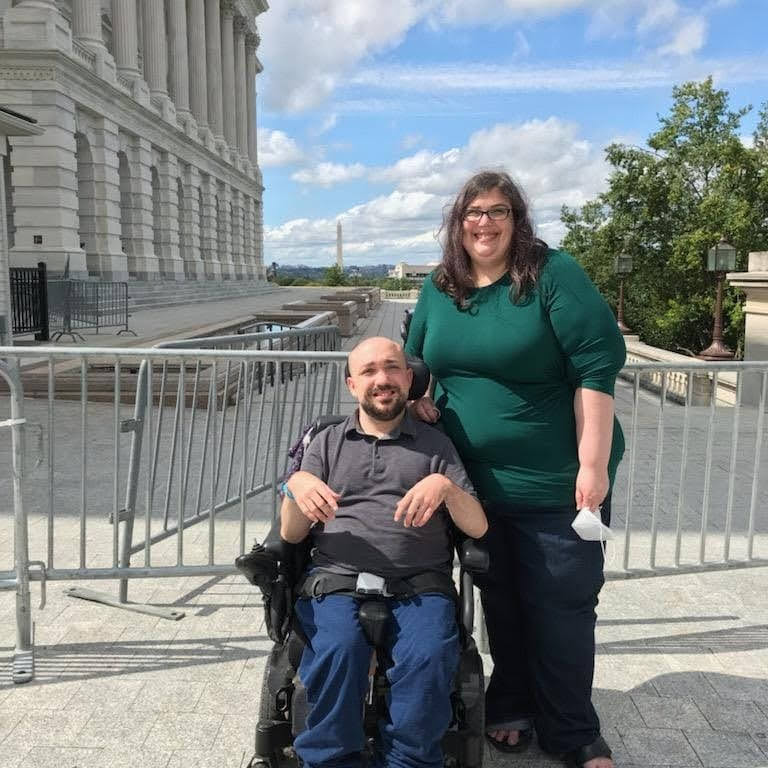 Lynn Weidner stands with Brandon Kingsmore, who lives with spastic quadriplegic cerebral palsy. Weidner has been providing home care for Kingsmore for more than nine years, and the two have been advocating for investment in home and community-based services for the past two years.

For Weidner and many others working in the home care industry, working multiple jobs to support their families has become a necessity.

“Since working in health care I’ve always had two jobs, because it just doesn’t pay enough,” Weidner said. “Most home care workers, if we do not have a second job, are on public assistance.”

Last month, Wild shared Weidner’s story on the House floor while discussing her personal connection to those working in the home care field.

“One home healthcare worker in my district who cares for a young man who is disabled told me that she has not taken a single day of vacation time in more than 10 years,” Wild said. “This kind of thing is just completely unacceptable.”

Last night, I shared a personal story about the importance of home care workers on the House floor. pic.twitter.com/5uwnrvPD2q

Wild also praised the bill for its investment in clean energy, which she said complements green initiatives proposed in the bipartisan infrastructure plan. She said she hopes her district and other parts of Pennsylvania will be on the forefront of a future U.S. commitment to clean energy.

“I think Pennsylvania is an ideal state for more wind and solar energy to be developed,” she said. “In our district we actually have a lot of land that is available for it, and I’d love to see it happen.”

A wish list item for many progressives that is not included in the bill is free tuition to community college, but Wild said the BBB includes other programs that will positively impact the affordability of higher education in America.

Wild said she is also committed to battling rising prescription drug prices in the U.S., and to her, the biggest flaw in the Build Back Better Act is that it fails to address this issue.

“That has absolutely been a vital issue for me,” she said. “Believe me, if there wasn’t all this other good stuff in this bill I would be holding out, but it’s pretty clear to me that our friends in the Senate are not going to allow that to be in this bill.”

Wild said delaying the potential passage of bill over the issue of prescription drug prices would be counterintuitive.

“At this point we have pretty much exhausted that subject, and I think it’s time to bring this to a vote,” she said.

Though not included in the new bill, Wild said she plans on addressing the issue of rising prescription drug costs in other ways.

The bill seeks to protect the Children’s Health Insurance Program from a reduction in federal funding, and was introduced after Congress failed to protect CHIP in their $3 trillion coronavirus relief package last spring.

“The CHIPPER Act will help provide much-needed coverage for the duration of the COVID-19 pandemic,” Fitzpatrick said. “So many families and children depend on CHIP for critical medical care. Our children are our future, and we must make sure that they have access to the care they need during this pandemic and its aftermath.”

Last month, Wild and Fitzpatrick reintroduced the bipartisan Fair Drug Prices For Kids Act, a bill they first introduced in 2020.

The bill would allow states to purchase medications at the lowest possible price offered by drug manufacturers, providing cheaper, life-saving medications for millions of children and their families.

“Far too often families are forced to make the tough decision between purchasing lifesaving prescription medication for their children or paying the bills,” Fitzpatrick said.

Wild said she became especially concerned about drug prices affecting those who are insulin-dependent; a population that includes many of her constituents.

Insulin prices are often times unpredictably and unfairly high, according to Wild, who shared a story about a woman with diabetes who accidentally dropped an insulin vial on her bathroom floor, shattering it and losing hundreds of dollars worth of medicine she feared she couldn’t afford to replace.

Unfortunately, stories like that are far too common, Wild said.

Constituents can also email her through her website, as well as sign up for her Wild Week in Review newsletter for weekly updates.