Note: The following history of public education in the Hellertown area was published in the 1972 commemorative booklet “Hellertown, Pa., Centennial, 1872-1972.”

On the strength of a petition from the people of the Saucon settlement, the colonial Governor constructed a highway along the route of the early trail road between Bethlehem and Philadelphia. This became known as the King’s Highway. Today, in our area, part of Route 412 and Route 212 south rest on the bed of this early wagon road. In its time it was an important link between Bethlehem and Philadelphia, for it was not only a stage coach route but also a means by which the farmers of the northern counties of the state could take their grain to the Philadelphia markets. During the Revolution this road made it possible for the farmers of the Saucon Valley area to transport their grain to the starving soldiers at Valley Forge. After the war, transportation by coach was increased both in time and speed. Stations were established along the route of travel, where fresh teams of horses were exchanged for spent ones, which allowed driving at top speed between stations. A station of this kind was operated on the site of what is now the Park Hotel.* All along the highway stone markers were erected and marked with the number of miles. A few of these still remain and can be seen in the Pleasant Valley area along Route 212. 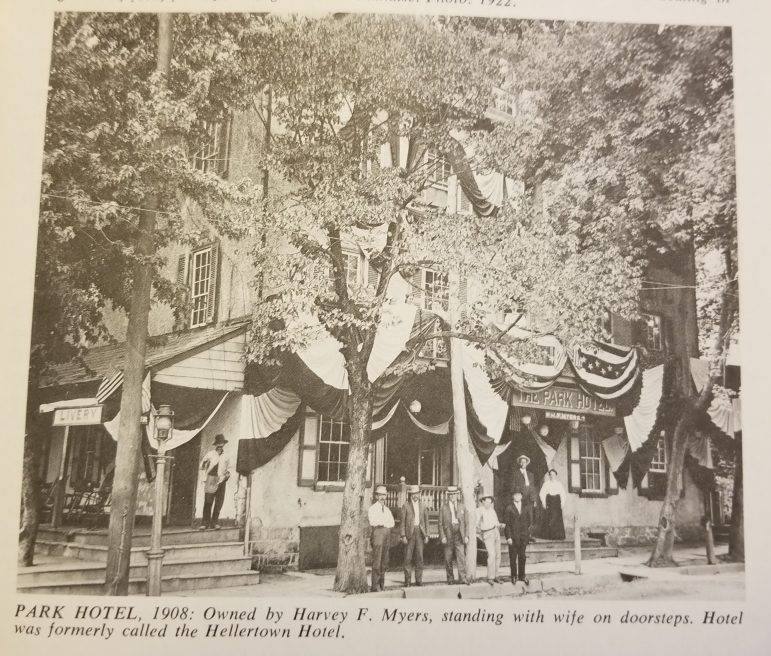 *The four-story Park Hotel–pictured above decorated with red, white and blue bunting in 1908–was located in the 700 block of Main Street in Hellertown, approximately where a Dunkin’ Donuts is located today. It was demolished in 1973.