Note: The following history of public education in the Hellertown area was published in the 1972 commemorative booklet “Hellertown, Pa., Centennial, 1872-1972.” For more of the history of the Saucon Valley School District contained within it, click here. 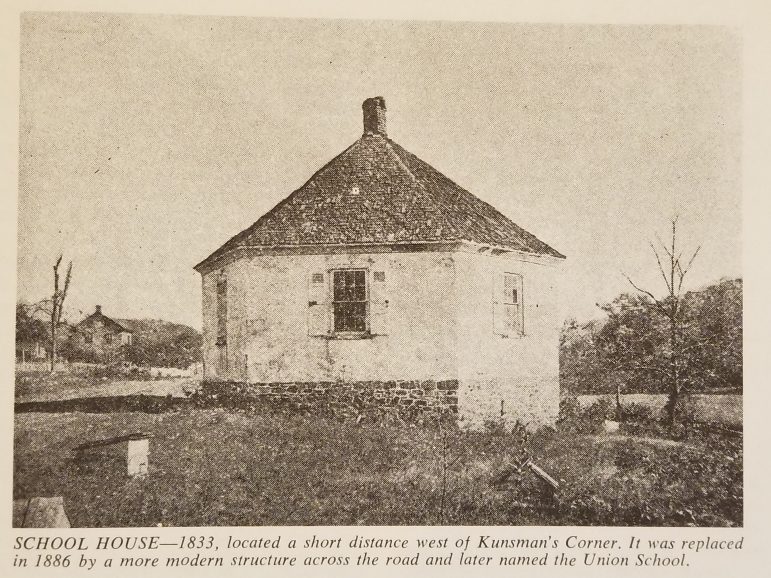 One of the earliest schools in eastern Lower Saucon Township was built at Kunsman’s Corner in 1833 and had six sides.

It was recognized at an early date that to be a good church member it was necessary to be able to read in order to understand the Bible and to take an active part in the church services. Thus the churches became interested in the church schools. Here the youth could be taught to read the German Language which was the language of the Bible, the catechism, and the Church Song Book. These schools were supported by the church, or by the members who had children to be taught, or by some members who may not have had children to send but assumed part of the cost of the instruction. The instruction of the children often was done by the pastor or even the chorister, who might have had the ability to do so. The only remaining school that can trace its existence to this period is the Saucon Church School, though it has gone through a number of revisions since that log structure in 1734. Apple’s church began with a school in 1762, but (it) is no longer in existence. The church school was replaced by the public one room school, of which Saucon Township had fourteen in 1859. In Valentine Hilburn’s report to the State Department of Education in that year, he notes that 31 pupils spoke English only; 510 spoke German only; 459 spoke English and German. In the early 1800’s some of the school buildings were six and eight-sided. One of the six-sided type built in 1833, shown here, was located on the east branch of the Saucon Creek near Kunsman’s Corner in Lower Saucon.