Note: The following history of public education in the Hellertown area was published in the 1972 commemorative booklet “Hellertown, Pa., Centennial, 1872-1972.”

The educational system of the Saucon Valley of which Hellertown is a part dates back to the early days of settlement.

Very many of the first settlers were of German stock. Upon their arrival they turned their attention to providing an education for their offspring. The children were taught their lessons in the home at first and later in church supported schools. There were two such schools near Hellertown, one at the Lower Saucon Church and the other at Apple’s Church.

Long before the “Free School Act” was adopted by the Legislature of Pennsylvania in 1834, there were schools in eight locations in Lower Saucon Township. Notwithstanding the opposition of some of the wealthy farmers in the valley, the public school system was introduced immediately after the passage of the act.

Among the men who labored most diligently for the introduction of free common schools in the Saucon Valley were Dr. Henry Detweiler and Rev. Samuel Hess. The first schools of the township, under the Free School Act were regarded as among the best in the county. A six month school term was a fact almost from the start. In 1840, a seven month term was ordered by the school board, and in the same year an election was held to decide whether the system should be continued. Approval by a twenty-seven majority allowed its continuance. The next election in 1843 showed a majority vote increase of one hundred and thirty.

The branches taught in these early schools were English and German, Reading, Arithmetic, with special stress on Mental Arithmetic, Geography, Grammar, Spelling, Spencerian Writing, and Singing.

The first school house built in Hellertown in 1839 was a small one room structure built on a lot now occupied by the St. Paul’s Evangelical United Brethren Church on Main Street, along Silver Creek. 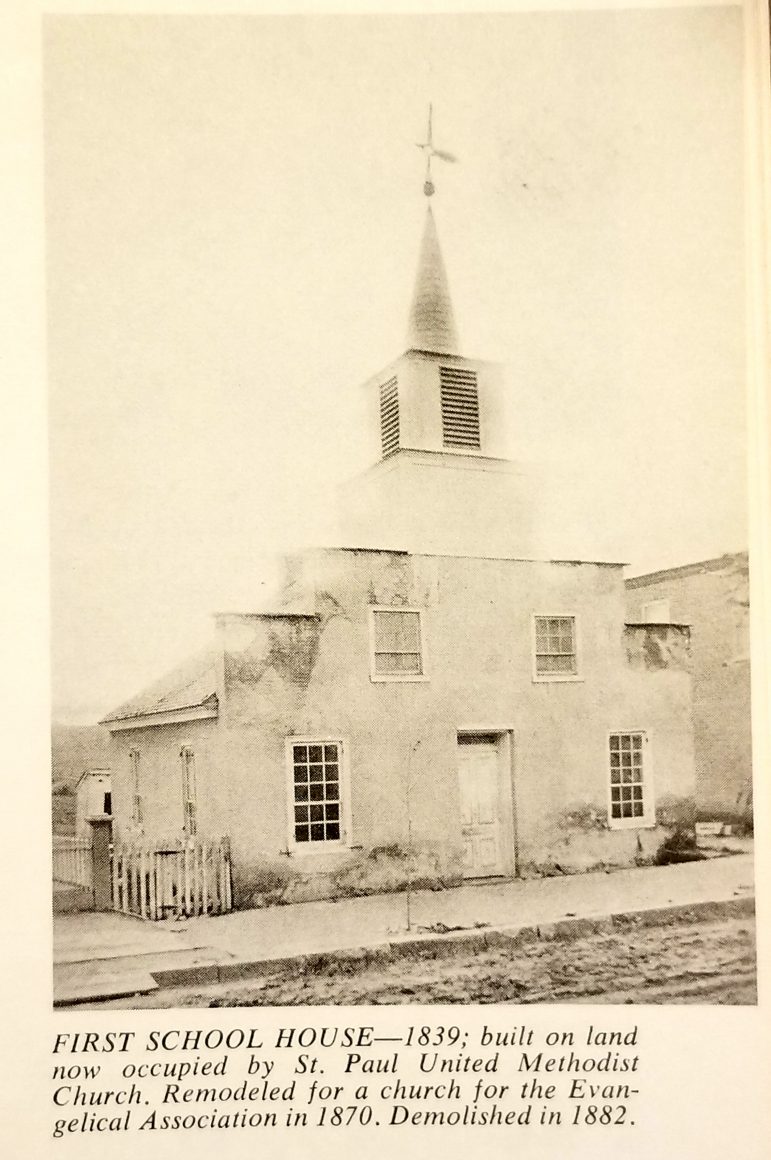 The first school building in what is today the Saucon Valley School District was built in 1839 and was located on Main Street in Hellertown, where St. Paul United Methodist Church stands today.

Before the Reinhard School was built on Northampton Street in Hellertown, a smaller school building occupied the site.

In the year 1870 a lot, located on Northampton Street, was donated by Tilghman Eisenhart for the purpose of erecting a school house. A two room brick structure was built and some years later an additional room was added to this building.

Hellertown High School was organized in 1896, chiefly through the efforts of Mr. A. I. Reinhard, with a three year course. The first high school building was located in what is now the office of the Brown-Borhek Lumber Co. on Main Street. In 1898, the first class consisting of three members was graduated. 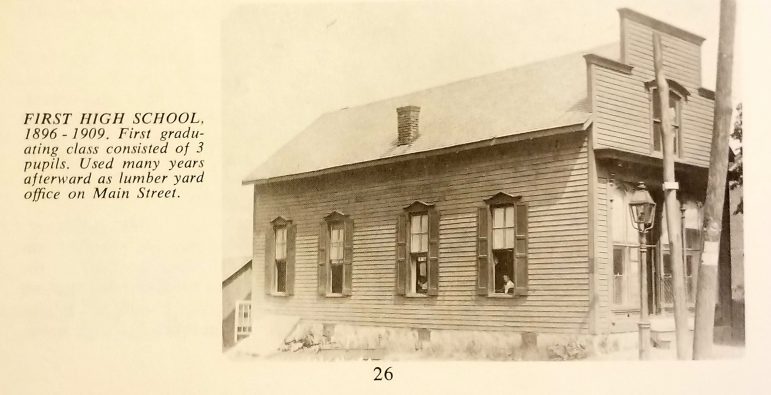 Mr. Reinhard was a faithful public servant who gave twenty-one years of unselfish service to the schools of the Borough. He lives today in the memory of many of his former friends and pupils, and in the building which bears his name.*

Upon his death he was succeeded by Mr. W. Reiff Nauman. Mr. Robert R. Hoppes succeeded Mr. Nauman. Mr. Hoppes served the schools 43 years as principal and teacher, and is still serving in many ways even though retired. His latest venture has been as prime mover in the establishment of the Lower Saucon Historical Society Inc. and its museum at the Franklin School.

The school building built on Northampton Street in 1870 was supplemented in 1910 by a more modern building, which housed all the pupils of the borough, numbering 142. This building consisted of seven classrooms and an auditorium. It served orginally as both an Elementary and High School until 1920. Today it is known as Reinhard Elementary School.

Built in 1910 and expanded in the 1950s, the Reinhard School building on Northampton Street was demolished in 2012. Today a new public works facility for the Borough of Hellertown is under construction at the site. 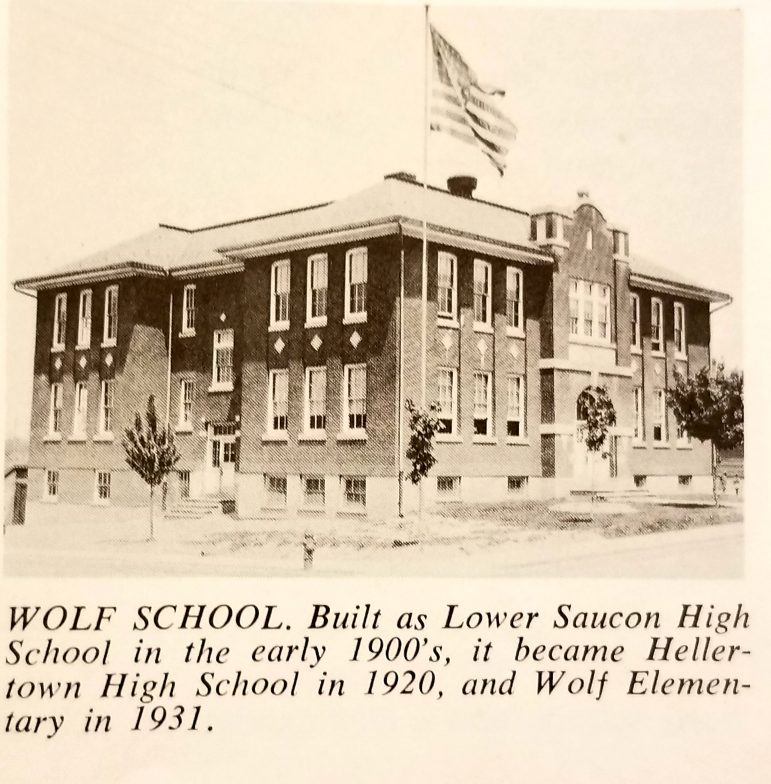 The Wolf School, which still stands on E. High Street in Hellertown, was converted to apartments many years ago.

The annexation of a portion of Lower Saucon Township, called the Cross Roads, as the First Ward of the Borough, July 1, 1919, brought additional buildings and pupils to the Borough of Hellertown. On July 1, 1920 the township was reimbursed in the amount of $15,500 for the buildings. The three buildings acquired were the Lower Saucon Township High School, and also the Franklin and Furnace Buildings. With this acquisition the school population trebled making it necessary to erect a two-room temporary building at the rear of the Furnace School. Prior to annexation in 1920 the school population numberd 245. After annexation, it had grown to 700.

Because of the rapidly increasing school population the School Board took the necessary steps to provide additional classrooms and equipment, by calling upon the citizens of the Borough to vote upon the question of creating a bonded indebtedness of $75,000. This money was to be used for the erection of a new High School Building. The proposed bond issue was defeated in a special election held March 17, 1927.

The Hellertown Schools at this time were organized on the 6-6 plan. The first six were elementary grades, and the last six were Jr.-Sr. High School. It should be noted here that the final grade 12 was completed at Liberty High School, Bethlehem, Pa.

When Mr. R. N. Taylor resigned as Supervising Principal on June 30, 1928 Mr. M. E. Illick, who had served as Hellertown High School’s Principal during the 1927-28 term, was elected to fill the vacancy. He served the district in that capacity from 1928-1953, and from 1953-1963 as Superintendent of the Hellertown-Lower Saucon Joint School System.

The overcrowded conditions which existed in the late 20’s prompted the School Board to purchase several acres of land on Main Street between Thomas Avenue and Sycamore Street. In November 1929 when the voters approved a $100,000 bond issue it made possible the erection of a new high school building.

This new building was occupied in January of 1931. Upon the recommendation of M. E. Illick, Supervising Principal, the School Board authorized the addition of the 12th grade to the curriculum. Since 1932 a senior class has been graduated annually from a regular four year high school course, and the graduates have been able to enter institutions of higher learning directly. 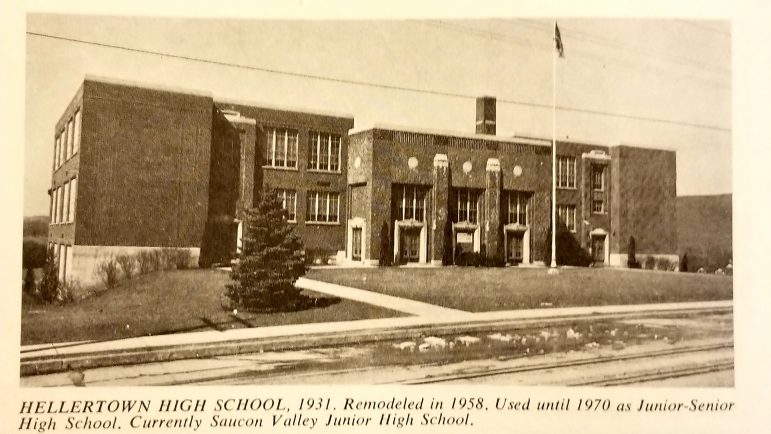 Some detail of this building program follows:

Besides the construction completed during this period there were other accomplishments. The instructional program was reviewed and improved. All schools–elementary and high school were evaluated and given satisfactory ratings. The high school was accredited by the Middle States Association of Secondary Schools and Colleges in 1962.

It might also be noted that a broad program of sports was adopted from 1932 to the present. Lehigh-Northampton League championships have been won during this period in football, basketball, baseball, track, and wrestling. The last mentioned sport has given us a state champion in 1970 and 1971 in the person of Don Rohn and in 1972 Dan Santoro.

The resignation of M. E. Illick, Supt. of Schools, effective August 31, 1963 ended thirty-six years of service to the Borough and Joint School Systems. He was succeeded by Mr. Glenn D. Muirhead who served from 1963-70. During Mr. Muirhead’s administration the Joint School System was dissolved and the new Saucon Valley School District was organized December 5, 1966. Mr. Muirhead resigned as Supt. of Schools June 30, 1970 and was succeeded by Dr. W. Eugene Stull, who is presently serving in that capacity.

The completion of the new Saucon Valley Sr. High School in 1971 marked the end of overcrowded classrooms and facilities and the beginning of a new era in the educational program of the community. This building includes 25 classrooms, library, auditorium, gymnasium, homemaking suite, industrial arts shops, music rooms, health suite, faculty rooms, cafeteria, swimming pool, and an administrative suite. Its total cost was $5,150,000. 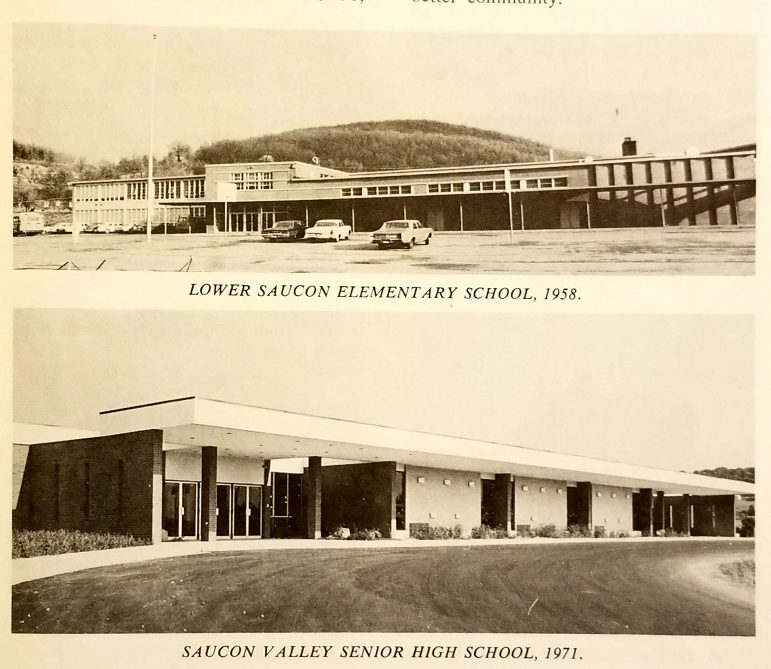 Saucon Valley Senior High School was barely a year old when the Borough of Hellertown celebrated the 100th anniversary of its incorporation in 1972. The high school remains in use today, having recently celebrated its 50th birthday. Pictured at top is the former Lower Saucon Elementary School on Wassergass Road, which today houses a business called The Bug Factory.

The addition of an area Vocational High School as well as a Community College both supported financially by the school district has enriched the program for our youth. Working together with community understanding and careful planning we shall continue to design for the future–to build better citizens and a better community.

*Note: The combined cost of the school buildings and additions that were constructed in Saucon Valley between 1957 and 1971, if adjusted for inflation, would equal approximately $67 million in 2021. This is more than the entire district budget for the 2020-2021 school year, which was approximately $48.1 million.