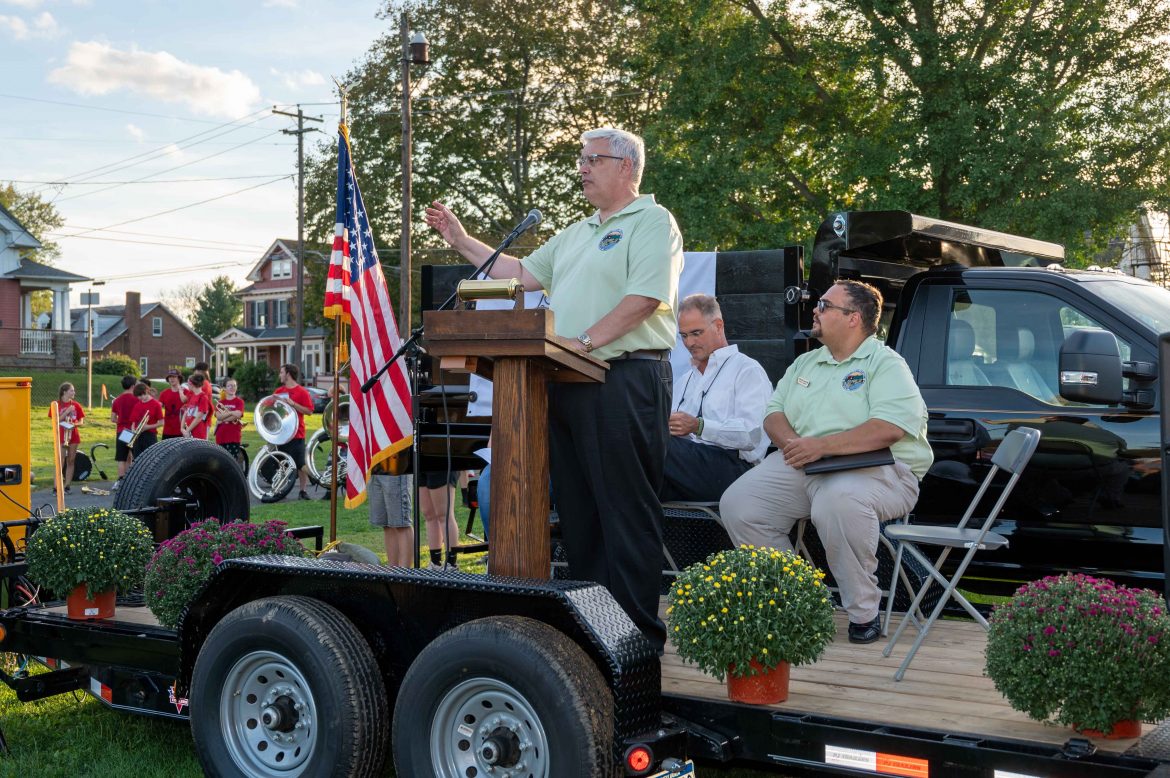 Members of the Hellertown community gathered Monday evening to celebrate the breaking of ground in the construction of the borough's new public works facility. The facility is being built at the former site of Reinhard Elementary School at 315 Northampton Street. 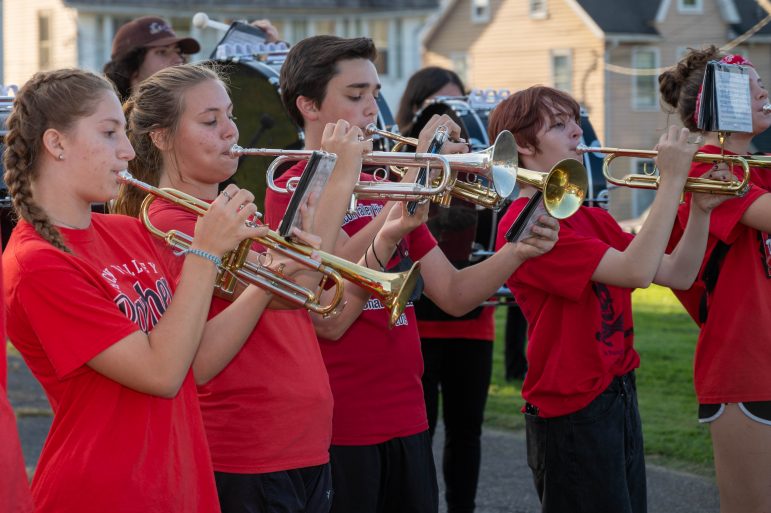 Members of the Hellertown community gathered Monday afternoon to celebrate the breaking of ground in the construction of a new public works facility on Northampton Street.

“Until today, no council was able to work together for the betterment of the community as a whole, to identify, plan and obtain the necessary resources to finally see this program through to completion,” said Hellertown Borough Council President Tom Rieger at Monday’s event.

Rieger told those in attendance that the borough obtained the parcel at 315 Northampton Street from the Saucon Valley School District over 20 years ago.

Borough planners originally sought to build a “multi-municipal service center” on the site, which would have included facilities for the police, public works, administration, fire department and post office.

Over time those plans evolved, and last month borough council finalized stripped-down plans to build a public works and administrative facility on the site.

While those plans have been met with criticism due to the site’s proximity to residential neighborhoods, Rieger told Monday’s crowd that the approved plans make the most sense for the borough.

“Some here tonight, or watching online, may feel that this is not an appropriate spot for a public works facility,” Rieger said. “This council and mayor will respectfully disagree, as hours upon hours were spent reviewing and pursuing multiple options and opportunities.”

“This is not only the most fiscally responsible location, but also the most logical location within the Borough of Hellertown that will allow the borough to continue to serve its residents for decades to come,” Rieger continued. 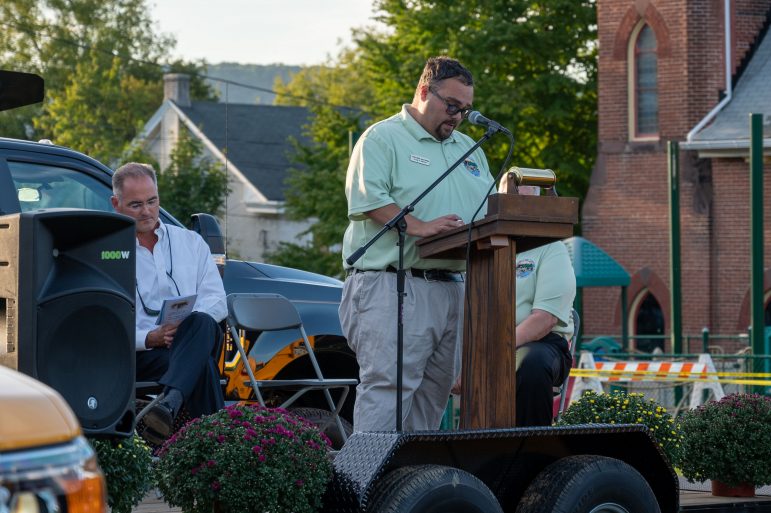 Hellertown Borough Council President Tom Rieger spoke at Monday’s groundbreaking ceremony. Rieger told the history of the site at 315 Northampton Street, dating back to when the borough acquired it from the Saucon Valley School District 20 years ago. Hellertown planners have long-since planned on constructing a borough facility of some sort on the site.

The construction of the new public works facility is phase one of a larger plan that includes a renovation of Borough Hall.

Hellertown Borough Hall currently houses some public works functions. As those functions migrate to the new facility upon its completion, Hellertown officials intend to renovate Borough Hall to allow it to better serve the police department, which it also houses.

“Our current facility is nothing more than an old horse stable and is not meant nor adequate for the needs of our public works department to care for and maintain the public infrastructure throughout the the 21st century,” Rieger said. “The next area of investment has always been a public works, police and administrative facilities and enhancements, and we are finally here today.”

Members of Hellertown Borough Council and other borough officials gathered for a symbolic groundbreaking photo before the ceremony concluded.

The ceremony also included an opening prayer and benediction from Pastor Phil Spohn of Christ Lutheran Church in Hellertown and comments from Hellertown Mayor David Heintzelman.

Refreshments were provided by Brooklyn’s Catering of Springtown. 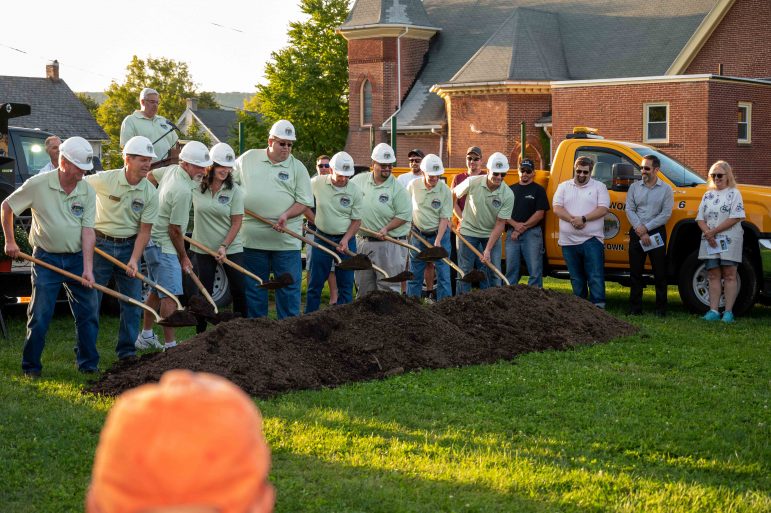 Hellertown Borough Council members and other borough officials posed for a symbolic groundbreaking photo at Monday’s ceremony. Council President Tom Rieger thanked his colleagues on council for their role in approving plans for the project. 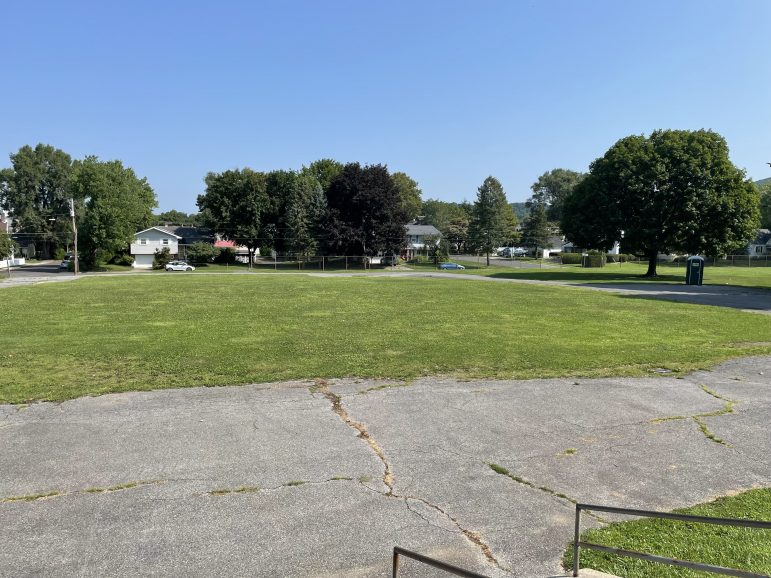 The former site of Reinhard Elementary School at 315 Northampton Street will be the home of a new Hellertown Public Works facility. Members of the Hellertown community gathered on Monday afternoon to celebrate the new facility’s groundbreaking.