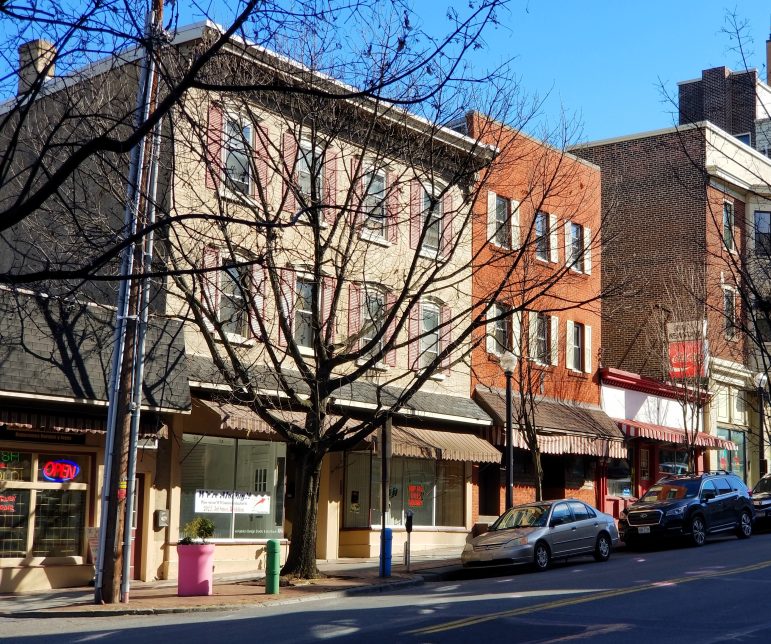 Four buildings in the 300 block of S. New Street–including the former Pat’s Newsstand and a building next to it that housed the former Your Welcome Inn–will be torn down to make way for the construction of nine-story tower on the site.

South Side Bethlehem, an area that has been undergoing an economic renaissance, will soon be home to a nine-story building that was the subject of concerns by residents and city council members about how it will meld with the surrounding neighborhood.

The building will be located at 317-327 S. New Street–between Third and Fourth streets–where four existing buildings are slated to be demolished to make way for its construction. The plans call for it to contain 61 apartments and a ground-level food court.

Bethlehem city councilwoman Paige Van Wirt said that although council approved the final proposal, there wasn’t unanimous support for the building. Van Wirt and several other councilors said they were concerned that had they not voted in favor of the plans, developers Rafael Palomino and Jeffery Quinn would have brought suit against the city.

Van Wirt said a potential lawsuit would have siphoned time and energy away from other important issues facing the city and its council.

Rachel Leon, who was elected to city council last fall and is one of its newest members, said that if council rejected the proposal it would have had to provide very specific reasons for doing so in court.

Van Wirt, along with other council members, said at a meeting Feb. 15 that they were concerned about how the new building’s height will impact the integrity of the surrounding South Side buildings and parks, including the nearby Greenway.

Although council voted in favor of the construction, they discussed ways to reevaluate the process for granting certificates of appropriateness for similar projects in the future.

Van Wirt said buildings that are too tall for the South Side should not be built, especially if they overshadow public parks.

“For me personally, a lot of the buildings that we’re going to see built in the South Side, the height has already been set and there isn’t much that can be done to address that,” Leon said. “But moving forward, when the HCC (Historic Conservation Commission) makes recommendations on projects, those recommendations should be listened to and followed. The historic area needs to be protected and developed appropriately.”

Leon–who was not on city council when the S. New Street building was first proposed and reviewed–said it is essential that the voices of the local residents who are being impacted be heard, and that the city’s historic districts be protected.

The S. New Street building is one of three South Side development projects that were recently approved. A five-story building at 305 E. Third Street and a mixed-use apartment complex in the former Holy Infancy School at 127 E. Fourth Street were also given the green light by city council earlier this month.