UPDATE: The winter storm watch that was in effect for the Lehigh Valley has been replaced with a winter storm warning in effect from 6 a.m. to 7 p.m. Saturday, March 12. According to the warning, 4 to 6 inches of snow are expected in Lehigh and Northampton counties, with blowing snow and difficult travel conditions due to wind gusts as high as 45 mph. In a 5 p.m. Friday briefing on the storm, meteorologists at the National Weather Service office at Mount Holly, N.J., put the Lehigh Valley in a 4 to 8 inch snow accumulation zone, and again warned of the possibility of a flash freeze Saturday afternoon and evening as temperatures rapidly drop below freezing. In the wake of the snow, Saturday night’s low  is forecast to be 16 degrees in Allentown.

With the first day of spring little more than a week away, many residents of the Lehigh Valley have begun putting their snow shovels and sidewalk salt away, secure in the knowledge that the relatively uneventful winter of 2021-2022 is nearly over.

According to meteorologists, however, Mother Nature is preparing one last, icy curveball for them; a “bomb cyclone” coastal storm that could produce heavy snow, howling winds and power outages across a wide swath of the Mid-Atlantic and Northeast this weekend.

To help residents prepare for that rather unwelcome scenario, the National Weather Service has issued a winter storm watch for Northampton and Lehigh counties for possible snowfall amounts of 3 to 6 inches and winds as high as 35 mph starting at 6 a.m. Saturday. The Poconos could see higher amounts and are under a winter storm warning.

An accumulation of six inches or more would make this the biggest storm of the winter in the Lehigh Valley, which has seen mostly small, “nuisance-type” snows this season.

“This is not your typical system where the low pressure passes by and cold air wraps in from behind, but struggles to change low elevations to snow,” wrote Pennsylvania Weather Action forecaster Josh Adams in a “first call” post about the storm Thursday. “Instead, a very strong cold front will already be blowing through just as precipitation gets going in many areas, with the low pressure still to our southeast.”

In spite of the fact that Friday’s temperatures will be above normal (high will reach the mid 50s), with the snow falling mainly during daylight hours, Adams said it will accumulate on all surfaces due to potential snowfall rates of 1 to 2 inches per hour.

“To make matters worse, winds will be sustained 15 to 25 mph, with gusts to 45 mph for several hours as the front goes through,” he wrote. “That will result in very poor visibility and isolated power outages, which crews will have a tough time restoring for a while given the conditions.”

In a forecast briefing published at 6 a.m. Friday, the National Weather Service office at Mount Holly also warned of the possibility of “a flash freeze of wet, untreated sidewalks and roads” Saturday afternoon, as temperatures plunge behind the Arctic cold front.

Please see our latest Key Messages for the system that will impact a large portion of the Eastern U.S. starting late tonight. pic.twitter.com/wszOPJLhRN

The forecast summary noted that there is some uncertainty about how much snow will fall across southeastern Pennsylvania, with the potential for higher amounts across southern parts of the Lehigh Valley, the Philadelphia suburbs and central New Jersey.

Weather models for the storm have been trending “for a colder storm with more snow potential,” the briefing said. 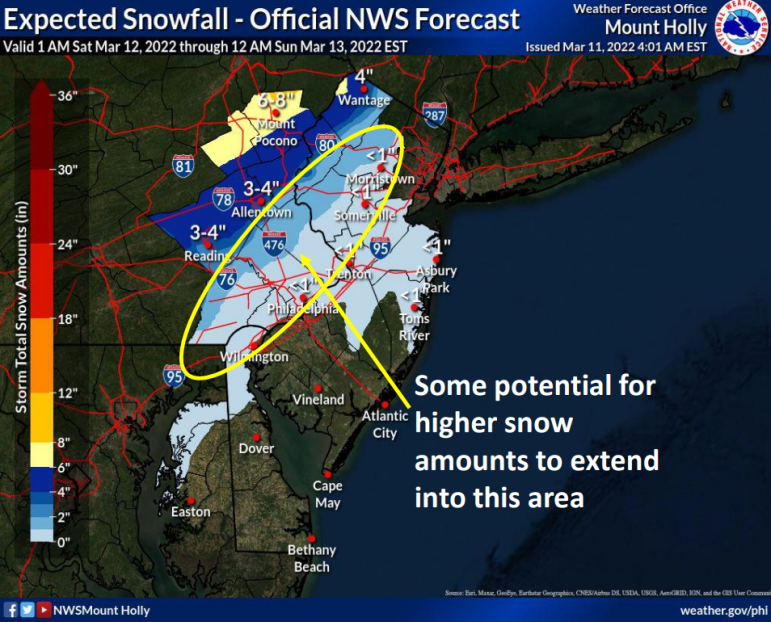 A snowfall forecast map for southeastern Pennsylvania includes a “zone of uncertainty” in which forecasters say totals could be higher than are currently being predicted. The Lehigh Valley is now under a winter storm watch for 3 to 6 inches of snow.

Residents should continue to monitor local news and weather outlets for updates on the forecast for Saturday, as well as possible cancellations because of the storm.

The Celtic Cultural Alliance announced Thursday that its annual Parade of Shamrocks in Bethlehem Saturday has been canceled because of the increasingly inclement forecast.