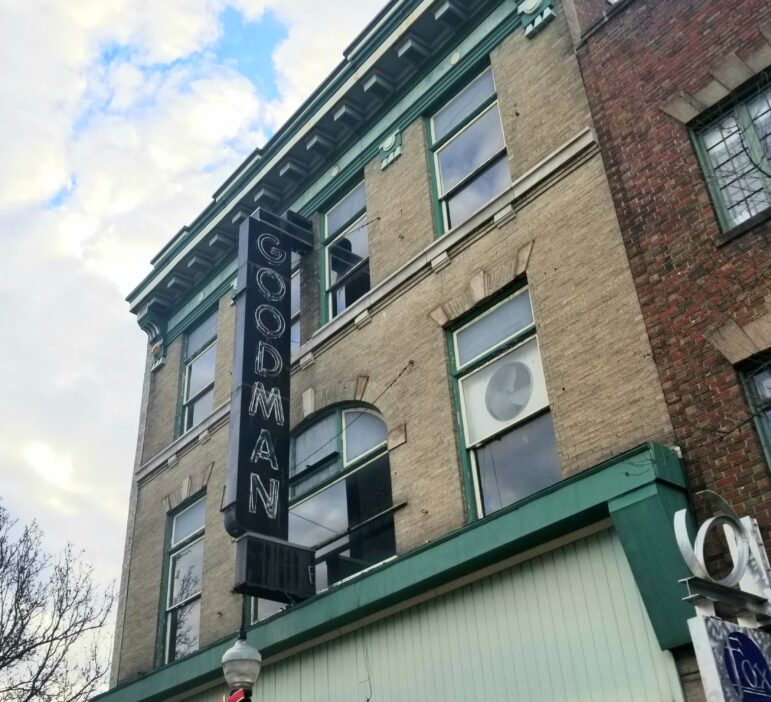 The historic Goodman building at 30-32 E. Third Street in South Bethlehem has been the focus of revitalization efforts for a number of years. Those efforts culminated in a groundbreaking for the building’s rehabilitation that was held last week.

South Bethlehem revitalization efforts received a symbolic boost last week with the groundbreaking for an E. Third Street rehabilitation project that was years in the making.

The dilapidated Goodman Building once housed a furniture store, but eventually became a vacant eyesore whose ongoing deterioration pitted city officials against its late owner.

“The Goodman Building project is another example of a public-private partnership that will yield important economic and community development benefits for the City of Bethlehem and the Lehigh Valley,” said state Sen. Lisa Boscola (D-18) in a news release about the groundbreaking.

Boscola’s office said she and legislative colleagues worked with Gov. Tom Wolf to procure more than $2 million in state funding for the project.

“Without this state investment, this groundbreaking would not have been possible today,” she said.

“The Goodman Building was a blighted structure for decades before the city stepped in,” said Bethlehem mayor J. William Reynolds, who was quoted in the release. “It sat empty, creating a drain on the Southside. It took the vision of the city to see this building for what it could be and the willingness of C3 to believe in that vision for us to be here today.”

“There’s a lot of potential here,” co-owner Randy Galiotto said. “From an architectural standpoint, this is a great building in a great location with great neighbors. We know there is a history of blight, and, thanks to much hard work from everyone at Bethlehem City Hall and in Harrisburg, we’re excited to be part of the solution.”

According to the news release, 12 residential units will be created as part of the $9.1 million Goodman Building redevelopment project.

“The Goodman Building is the perfect example of what good partnerships can accomplish: the city took control of the building and invested funds, (the Bethlehem Economic Development Corporation) loaned money to the project, Sen. Boscola and (state) Rep. (Steve) Samuelson (D-135) brought state funding, and C3 brought the expertise to make this project happen,” the release said.

The Goodman Building is located at 30-32 E. Third Street in a neighborhood that is close to Lehigh University, SteelStacks, ArtsQuest and other the Wind Creek Casino.

Much of the neighborhood has been undergoing gentrification, with other historic buildings scheduled to meet the wrecking ball in order for development plans to proceed.