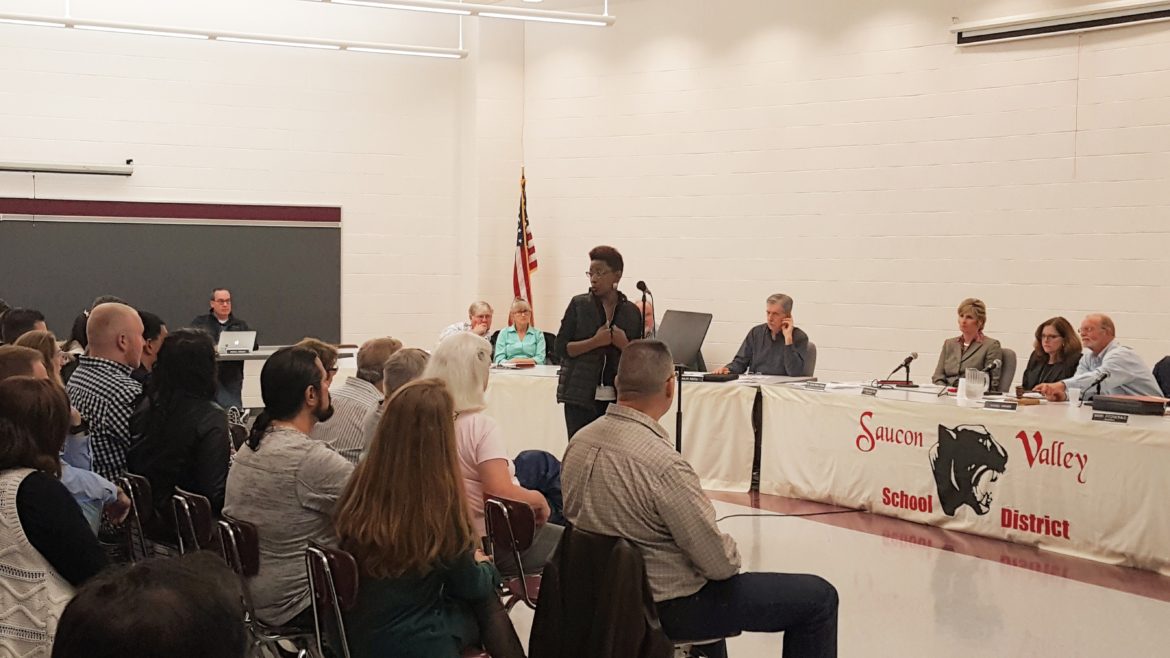 A Saucon Valley School Board member’s comments to parents who say their minority children have been bullied by white students in Saucon schools for years stunned many audience members at the board’s meeting Tuesday night.

Board member Ed Inghrim told parents Kerry and Sheila MacLean that if their family–which includes two sons, in high school and middle school, respectively–“can’t handle this day-to-day bigotry, then it’s your problem.”

Inghrim said he traces his lineage back to an ancestor who traveled to America in the early 1600s on the Mayflower, and said it is not the government’s responsibility to tell people “what they can say and what they cannot say.”

“I would suggest that what you say to your kids is, ‘hang in there and deal with it,'” Inghrim said.

His remark was met with audible gasps from the audience, which included a number of African-American parents of students in the district.

Kerry MacLean, countered Inghrim’s personal anecdote about his roots by sharing information about his own family background, which he said includes ancestors who immigrated to America in the Colonial era, war heroes and those who made the ultimate sacrifice to defend the United States.

His wife, on the other hand, is a first-generation immigrant.

“It doesn’t matter when you immigrated,” he said, adding that every American has the right to pursue life, liberty and happiness, as outlined in the Declaration of Independence.

“You hold on to your attitudes, and we’ll see about it at the next election,” he told Inghrim, who is not seeking re-election this year after serving for three terms on the board.

“Free speech is not illegal!” Inghrim told McLean, who responded, “harassment is,” as he took his seat.

Sheila MacLean told the board her sons have gone to school every day for nearly four years never knowing whether they will be called words like the “n-word,” “porch monkey or jigaboo.”

“Is that fair to them?” she asked the board. “Our children are depending on us to protect them.”

Sheila MacLean admonished Inghrim, asking him what he would do if he were a target for bullies every day.

Referring to another incident, in which a Confederate flag was thrown on a student, she said, “with all due respect, someone flying the Confederate flag, with their right, is not worth my children’s lives.” 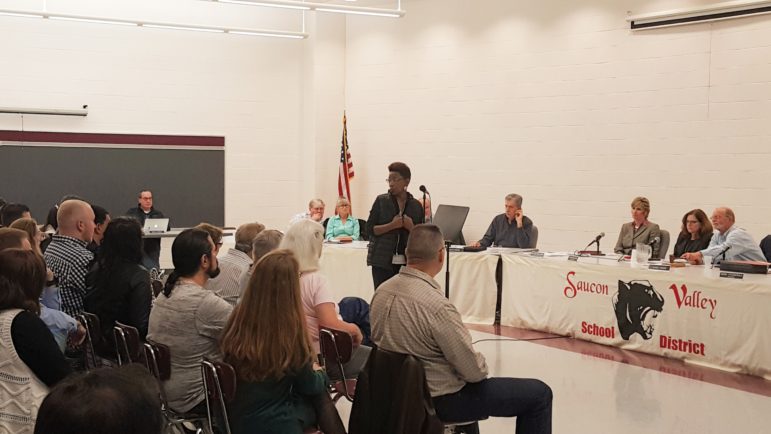 “What you said tonight was very hurtful,” parent Al Rivers next told Inghrim.

“I hope you comprehend the flag does demonstrate hatred when it’s used in an inappropriate way,” he said. “Things change over time. … I’m praying for you.”

During a meeting which also included the presentation of a draft equity plan that school officials hope will help promote tolerance in Saucon Valley schools, if recommendations such as a ban on displays of the Confederate flag are approved, Supt. Monica McHale-Small also spoke out about the racism she has encountered during her tenure in the district.

“We really need some strong statements as a district,” she said, making one herself when she called the Confederate flag “a symbol of hate.”

“I’m going to be very honest and people might not like to hear this, but I’ve never heard the ‘n-word’ being used so much in a school district in my 27 years as when I came here, and I’d never seen the Confederate flag in–on school grounds and on students in school until I came here. It’s not something I’m used to seeing and it’s not something that happens in all schools. It just doesn’t,” she stressed.

“That was part of the discussion of our (volunteer inclusion) committee, and we felt that a really strong statement was needed,” she said, referencing the seven-page equity plan, which board members did not vote on Tuesday.

Other board members including Bryan Eichfeld and John Dowling said they were unaware of how serious racial problems at Saucon Valley had become.

“I guess I was naive,” Eichfeld said, adding that to hear of the bigotry hurts him personally, because he has a “beautiful” one-year-old granddaughter who is black.

Dowling said he had been under the impression that incidents of the nature described by the MacLeans and other families were on “the ash heap of history.”

“I’m not sure how, but we will fix this,” he promised them.