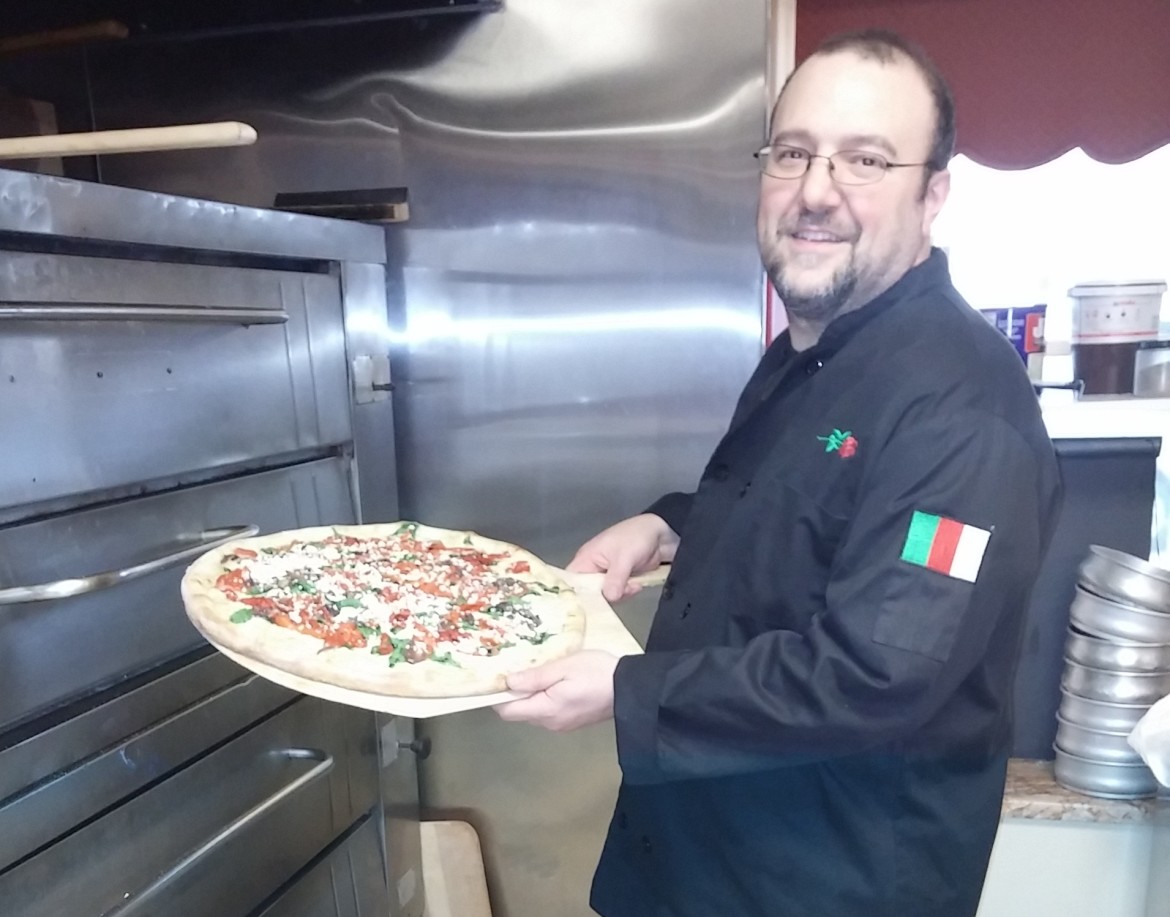 Cafe Erica and Bella's Ristorante chef-owner Vinny Cavataio prepares to put a gourmet goat cheese pizza in the oven at the cafe.

Visitors to Cafe Erica in Hellertown over the past month have been noticing some exciting changes–both in terms of the cafe’s decor and its menu.

Owners Sue and Vinny Cavataio have remodeled the restaurant–which opened in 2011–and introduced an expanded dine-in/takeout menu that includes hoagies, regular and gourmet pizza, steak sandwiches, wings, salads, calzone, stromboli and many other options. 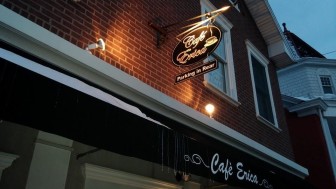 The breakfast specials, baked goods, tempting desserts, coffee, tea and specialty hot and cold drinks that have helped make Cafe Erica a popular destination in Hellertown are still available, along with the friendly service customers have come to expect. 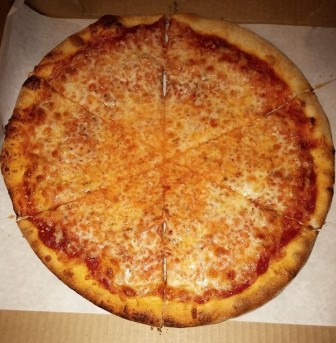 A traditional large pizza from Cafe Erica. Regular pizzas are available for dine-in or takeout in 12-inch, 16-inch and Sicilian sizes, with or without toppings. Gourmet pizzas are also on the new menu.

“We always sold pizzas at Bella’s from the beginning, and customers would make comments to us about having larger pies–especially the gourmet pies that we do,” she said.

She added that loyal customers who’ve followed her chef-owner husband, Vinny, from some of the other establishments he’s cooked at were also asking for items like cheesesteaks to be added to the menu.

“We wanted to also incorporate what really works here,” she said. 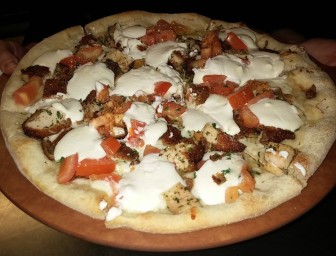 Chicken Milanese is one the gourmet white pizzas on the new menu at Cafe Erica in Hellertown.

The Cavataios’ commitment to using only the best ingredients in dishes that are prepared to order has remained a constant, she said, adding that food from both Bella’s and Cafe Erica is always “the freshest of the fresh.”

So what’s on the new menu at Cafe Erica?

Pizza, for starters, and not just the old-fashioned kind. 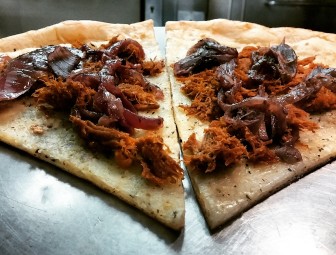 Regular pizza in 12-inch, 16-inch and Sicilian sizes, with or without toppings, is also available, along with gluten-free pizza (served on a 12-inch crust for $1 extra). 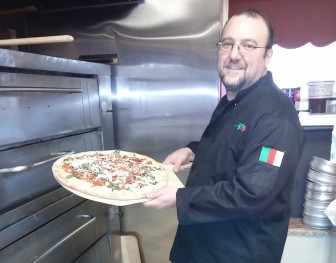 Cafe Erica and Bella’s Ristorante chef-owner Vinny Cavataio prepares to put a gourmet goat cheese pizza in the oven at the cafe.

Sue explained that pizzas can even be created for special times of year. For example, Vinny recently prepared a Tuna Melt pizza on a Friday during Lent, when many observant Christians refrain from eating meat.

For those with a sweet tooth, there are also dessert pizzas in flavors that include Peanut Butter and Jelly and Nutella with Cannoli Cream.

A few of the other new menu items are:

So far the changes made at the cafe have been well-received, Sue said, adding that the menu additions have put Bella’s and Cafe Erica nearly in a class by themselves in the Saucon Valley area. 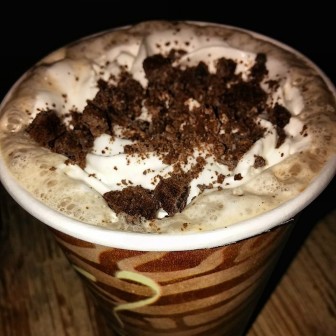 A Caffe Mint a la Mocha topped with crushed chocolate mint cookies is a specialty coffee drink served at Cafe Erica in Hellertown.

The Cavataios believe this because the two restaurants together represent a unique combination of eateries under one roof: a full-service Italian restaurant with a large seafood selection and an attached cafe, where customers can alternatively enjoy a lunch with friends or a gourmet coffee and dessert while working and taking advantage of free wifi.

Sue said the reviews of the cafe’s new decor have also been positive.

Reclaimed, seasoned barnwood that’s more than a century old was used to create eye-catching wainscoting, and new tables and chairs as well as high-top tables have replaced the old seating. 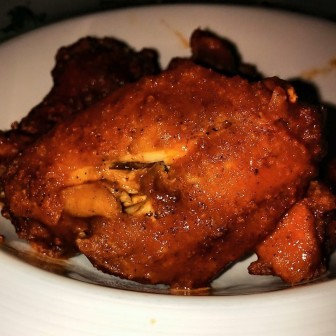 A new Cafe Erica website that will highlight the menu is currently under construction, and a new Bella’s website was recently launched.

Specials for the cafe as well as food photos are regularly posted on both Facebook pages, and customers are encouraged to follow them in order to stay up to date. 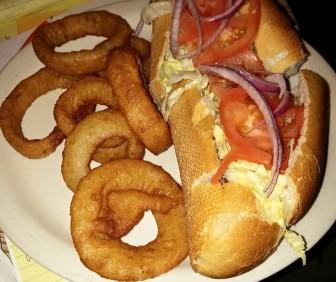 A California cheesesteak served with onion rings at Cafe Erica.

Takeout paper menus are available to take home from the cafe, and the menu (see below) will be posted on the new website.

The cafe’s current hours are as follows:

Cafe Erica is located at 637 Main St., Hellertown. Parking is available on the street and in a lot behind the restaurant. 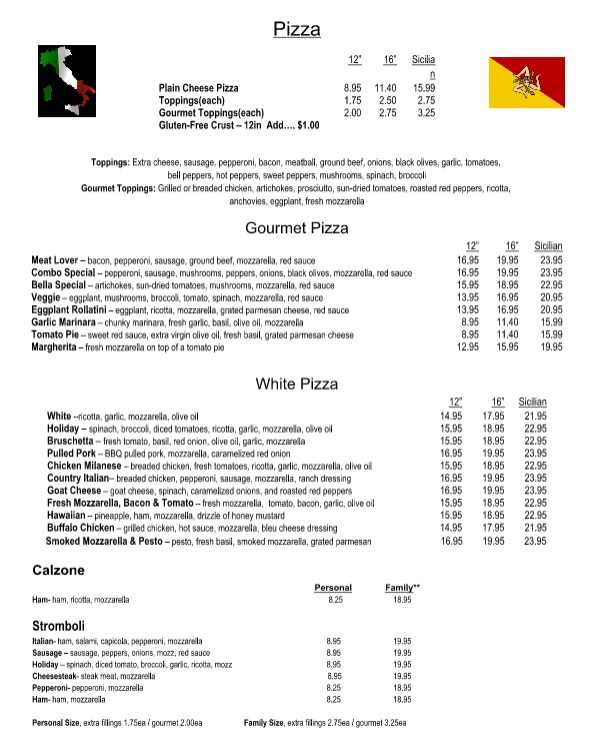 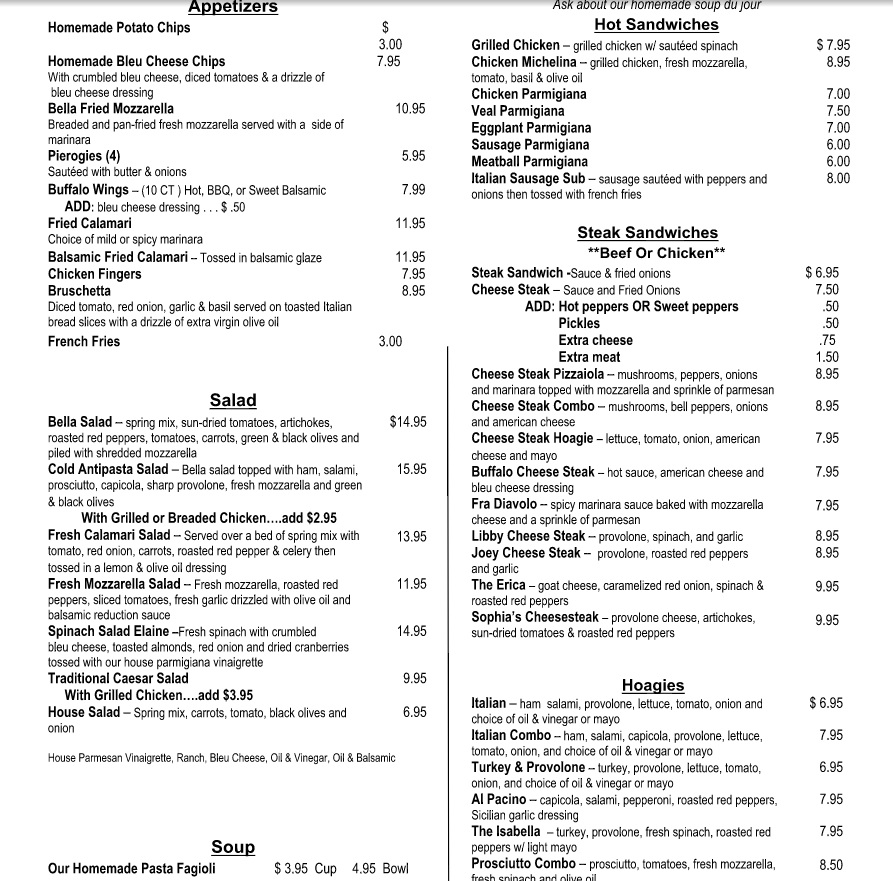