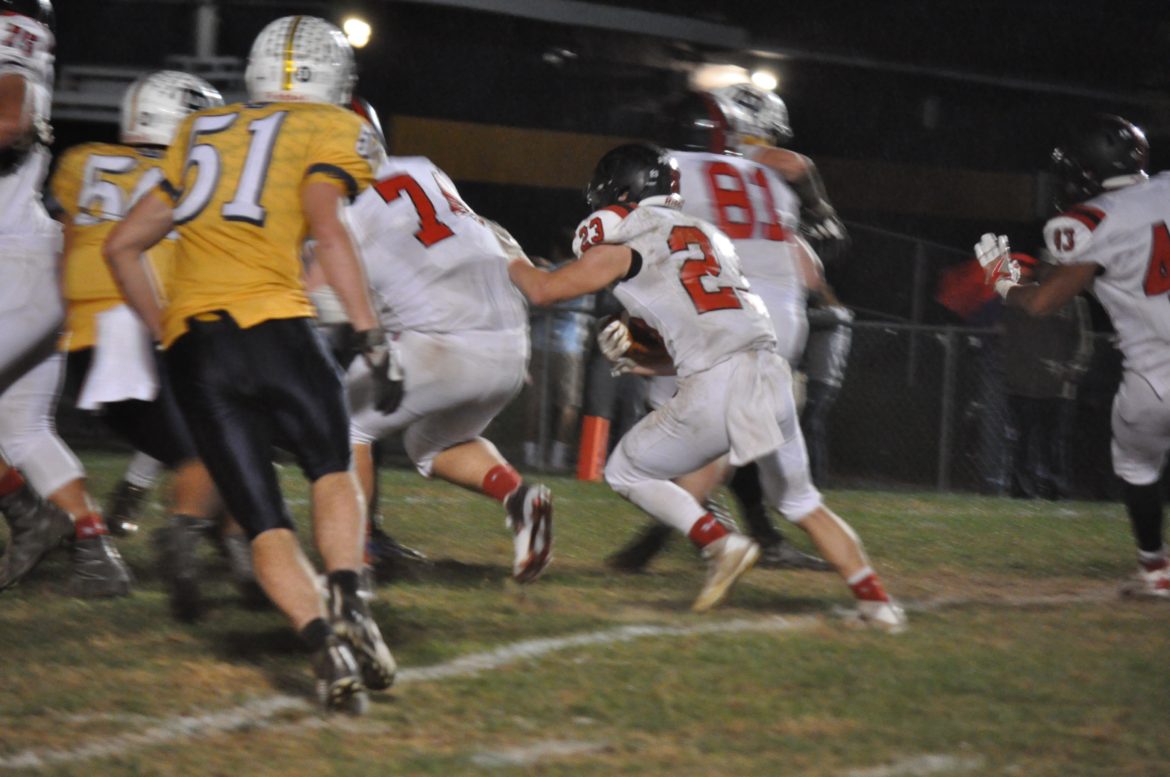 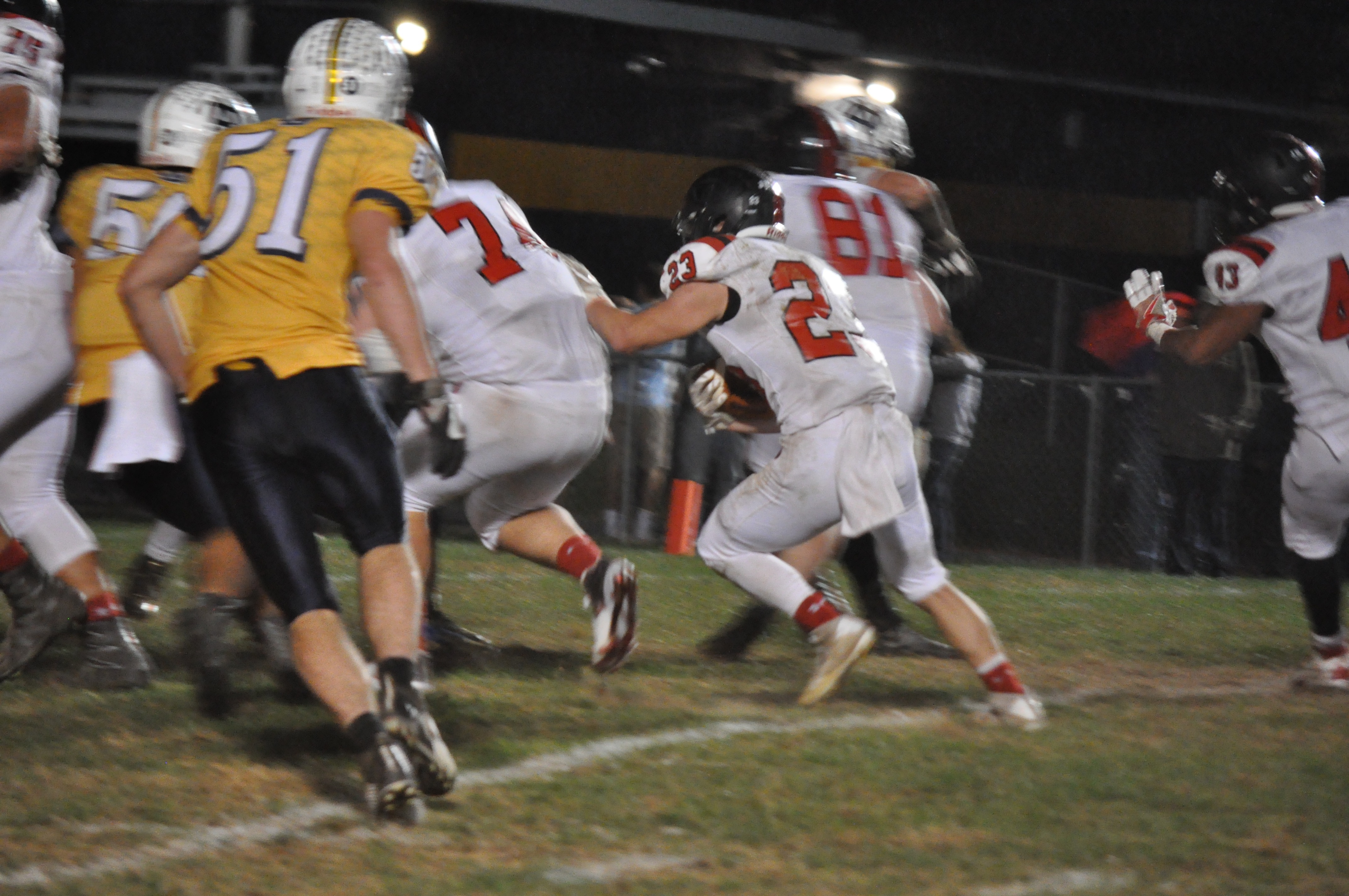 It was a high-stakes competition Friday night between the Colonial League-leading Notre Dame-Green Pond Crusaders and Saucon Valley Panthers. With the league title on the line between the two talented squads, few doubted it would not be an intensely tight game. It took 47 of the 48 regulation minutes, but the Panthers proved they were the better team. Saucon outlasted the Crusaders 28-24 and have clinched at least a share of a third consecutive Colonial League championship. It was a high school football classic.

The Crusaders won the opening toss and wanted the ball. Notre Dame threatened early and on their second play from scrimmage executed a 43-yard pass and catch from Cole DeFranco to Jalen Simpson down the Crusader sideline. It gave Notre Dame 1st & 10 at the Panther 20 yard line, but the Panther defense held and the Crusaders turned the ball over on downs.

Saucon Valley took possession at their own 13 yard line and ventured on to a determined 7 play drive ending with Zach Petiet punching the ball into the end zone for a score. The drive was highlighted by a 48-yard dash up the middle by Petiet. Josh Snead connected on the extra point to put the Panthers up 7-0 with 6:44 to play in the opening quarter. 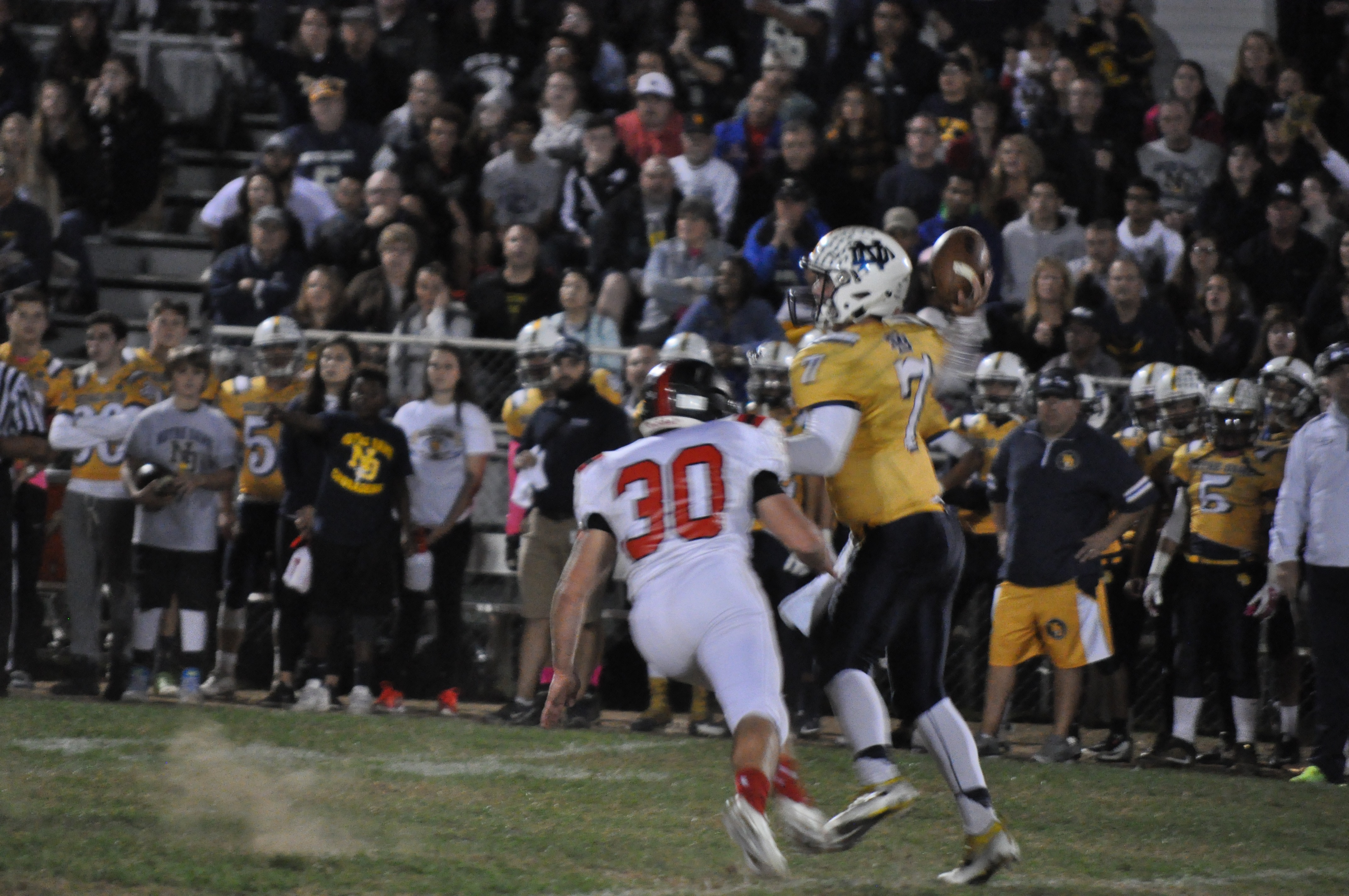 Rising to the occasion, the defense for each side stepped up and snuffed the scoring until Saucon Valley marched 88 yards down to the Crusader 8 yard line. On 4th down and feeling confident, the Panthers opted to forego the field goal and take their chances. However, Alstan Wolfe was stopped short and Notre Dame regained possession at their own 8 yard line. On their very first play of the series, Notre Dame failed to block “King Kong” Cody Zrinski who forced a Crusader fumble that was recovered by Saucon’s Abe Lugo at Notre Dame’s 13 yard line. Three plays later Brandon Holub threw a laser and hit Kory Kemmerer in full stride for a 19 yard touchdown. Snead hit the extra point and the Panthers took a 14-0 lead with 2:05 left in the half.

The Panther defense held the Crusaders and forced them to punt from their own 45 yard line with under a minute go in the half. However, a questionable personal foul call that bewildered and frustrated Panther Nation gave the ball back to Notre Dame. Instead of 1st & 10 for the Panthers at their own 25 yard line the Crusaders were gifted new life. The phantom penalty resulted in 1st & 10 for the Crusaders at the Panther 39 yard line. Two plays later Notre Dame connected on a nicely executed “wheel route” for a touchdown with only :35 seconds left in the first half. Notre Dame closed the gap to 14-7 at halftime. This was a big momentum swing for the Crusaders that carried over to the second half. 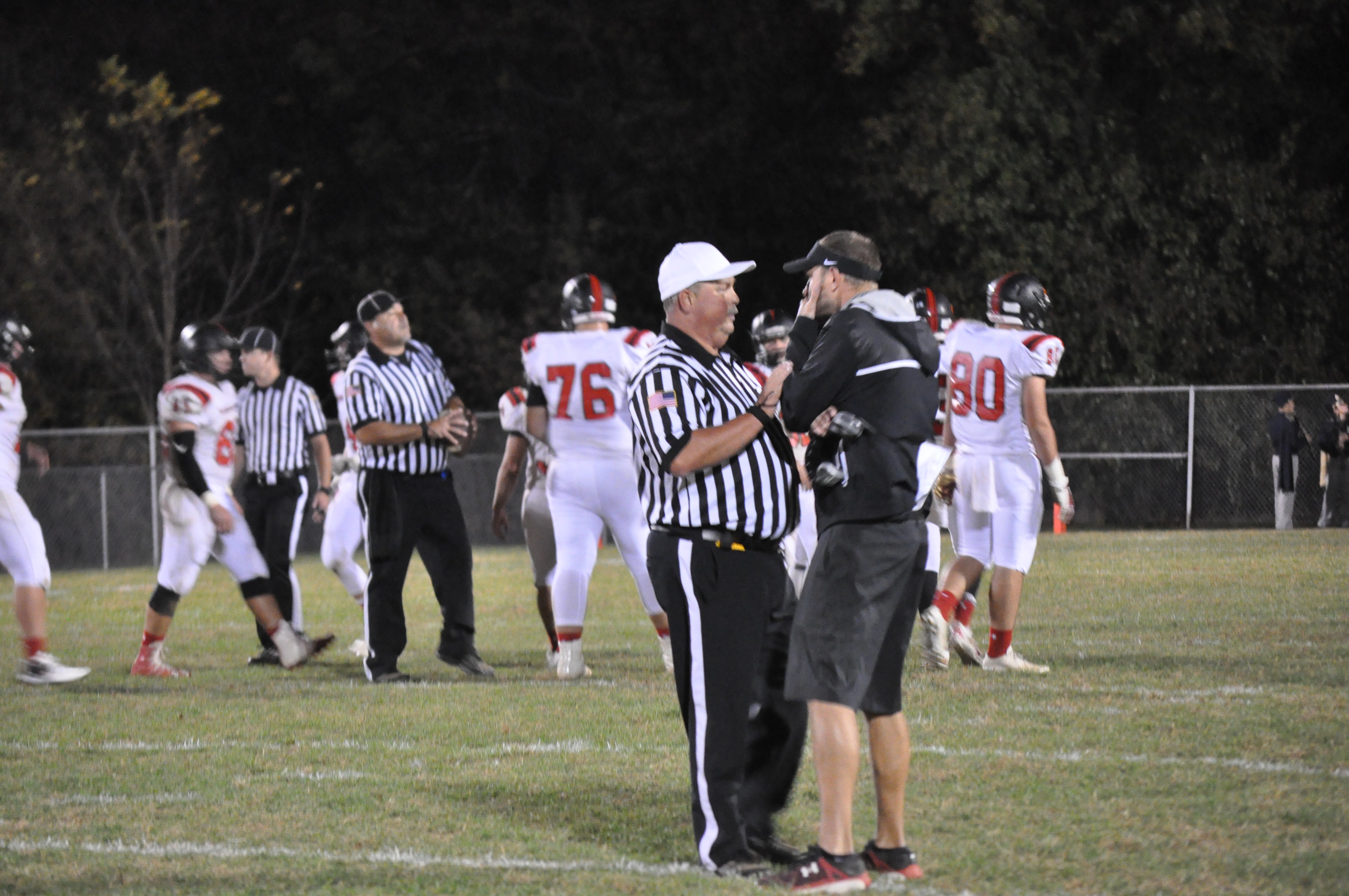 Coach Sams trying to get a satisfactory explanation for the phantom penalty called against his Panthers.

The Panthers received the second half kickoff and went three-and-out. Notre Dame took over at midfield and crafted an eight play drive that knotted the score at 14 with 8:30 remaining in the third quarter.

Saucon Valley then turned the ball over on downs with their next possession at their own 48 yard line. Notre Dame was again effective moving the football. Crusader quarterback Cole DeFranco led his team deep into Panther territory, but had to settle for a 27 yard field goal. With just under four minutes to go in the third quarter Notre Dame took the lead 17-14.

Still riding the momentum swing, Notre Dame forced another Panther three-and-out punt. But, perhaps a little too overconfident, the Crusader coaching staff called for a “flea flicker” on 2nd & 10 from the Panther 30 yard line. No doubt designed to try and catch the Panthers sleeping and break the Saucon Valley morale, Notre Dame’s intentions backfired. Saucon safety Kory Kemmerer was the wiser and intercepted the trick play in the Crusader end zone near the end of the third quarter. Kemmerer’s pick swung momentum back Saucon’s way.

Saucon Valley responded with a 12 play drive that ended with a six yard Brandon Holub to Alstan Wolfe roll-out pass for a touchdown. Snead’s extra point took the lead back for the Panthers and made it 21-17 with 7:09 remaining in the game. 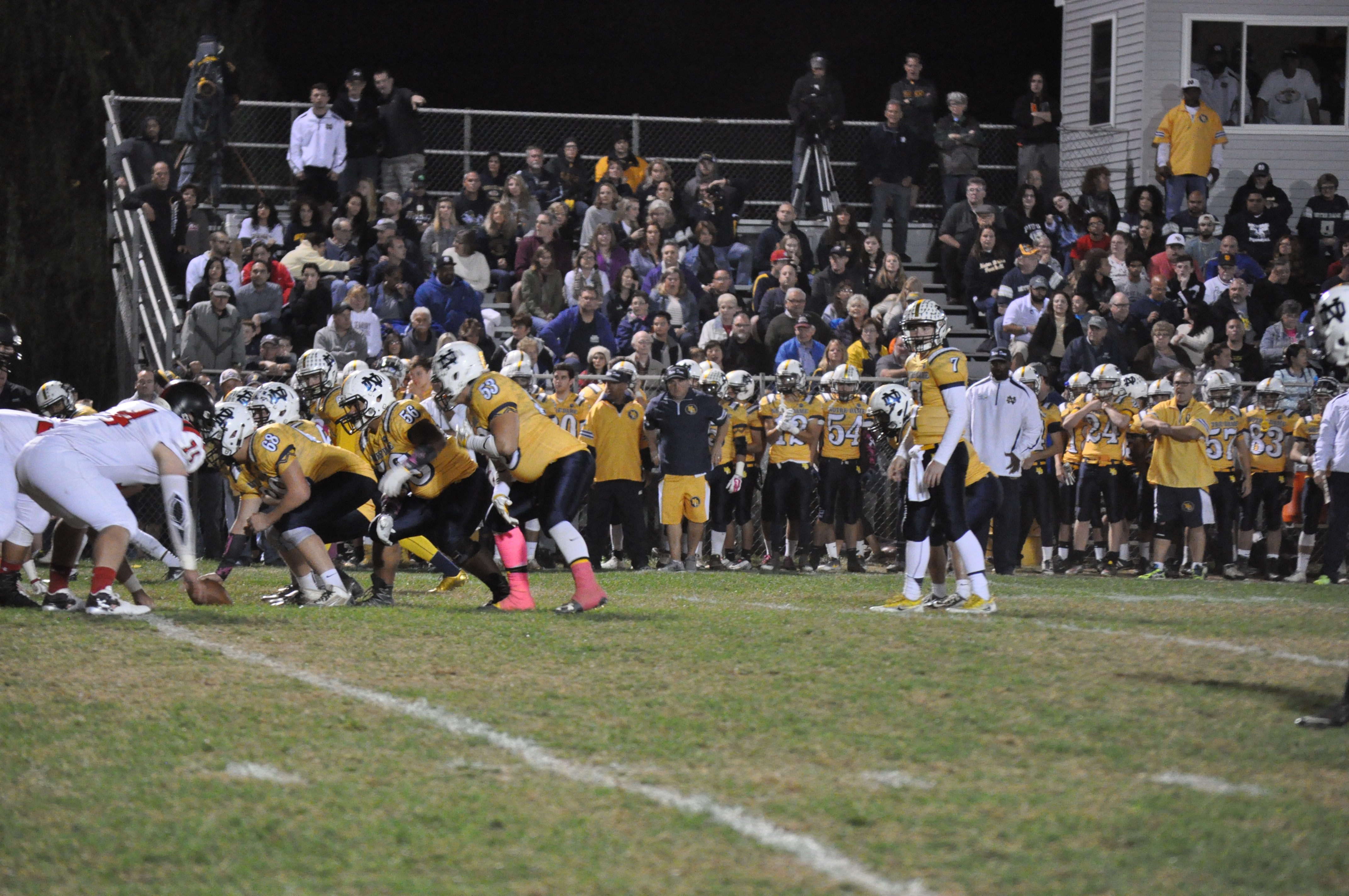 Quarterback Cole DeFranco of Notre Dame looks for a hole in the tough Panther defense.

The Crusaders answered with an eight play drive that ended with DeFranco finding Crusader receiver Jalen Simpson behind the Panther defense due to busted coverage. The Panther miscommunication resulted in a 38 yard touchdown, giving the lead back to Notre Dame 24-21 with 5:16 remaining.

The poised Panthers never panicked; they just went to work. A little Petiet, a little Kemmerer, a little Lugo and a little Holub. Saucon Valley methodically moved the ball down to the Crusader six yard line. On 3rd & 5 from the six Saucon Valley ran a quarterback sneak that mirrored a rugby scrum. Holub and the Hogs plowed their way into the end zone for a touchdown. Snead hit the extra point and the Panthers took a 28-24 lead with 1:01 left on the clock. 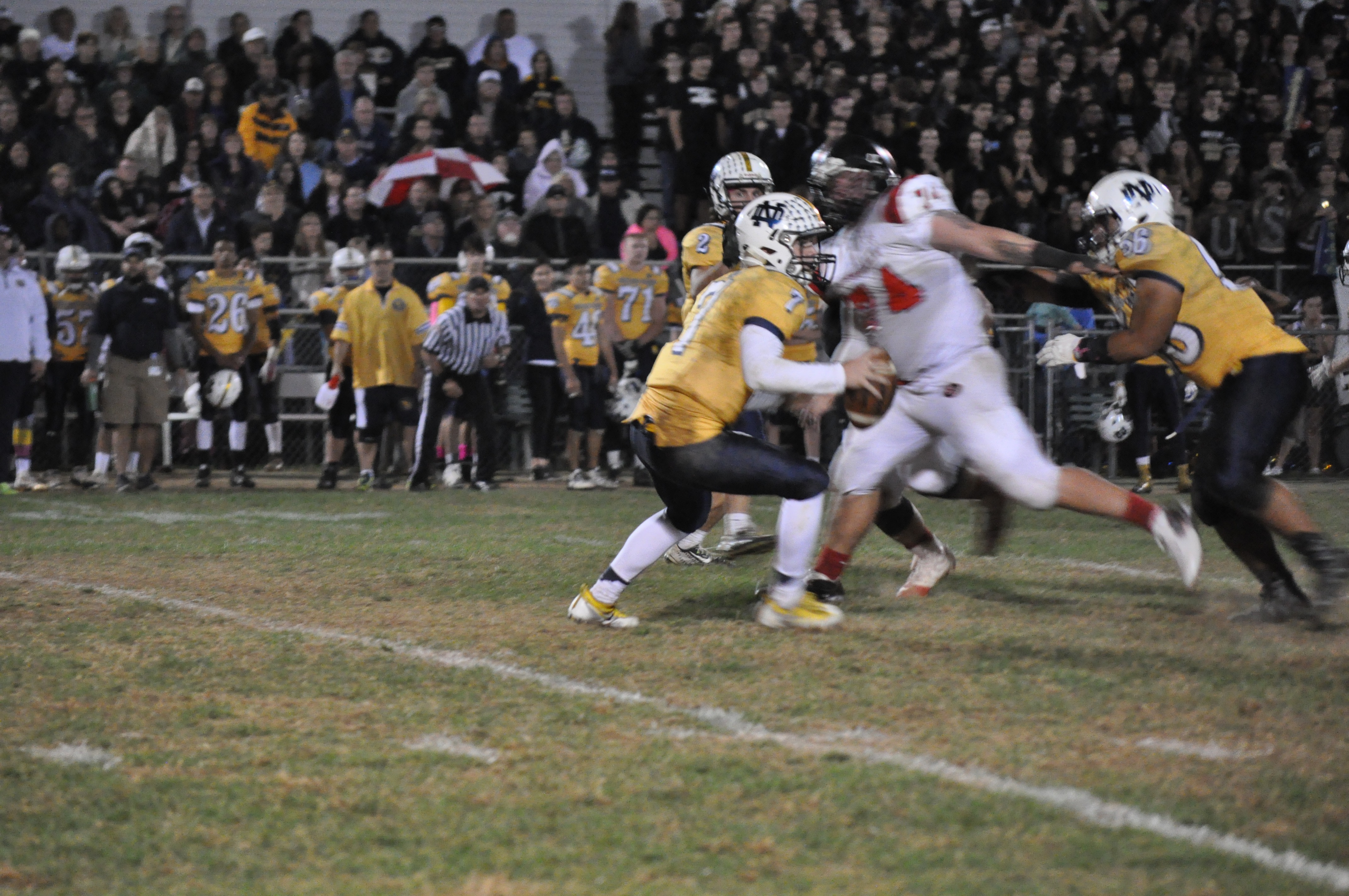 Saucon senior kicker Josh Snead crushed his kickoff and the Panthers were able to pin the Crusaders back at their own 20 yard line. DeFranco tried to rally his troops but the Panther defense smelled blood. On 3rd & 4 from their own 26 yard line DeFranco dropped back to pass but was kept uncomfortably tight in the pocket by the Panther three man rush of Cody Zrinski, Ryan Meyers and Patrick Morrissey. When DeFranco stepped up into the collapsing pocket he lost the handle of the football and Saucon’s Ryan Meyers was there to recover his fumble to end the game. 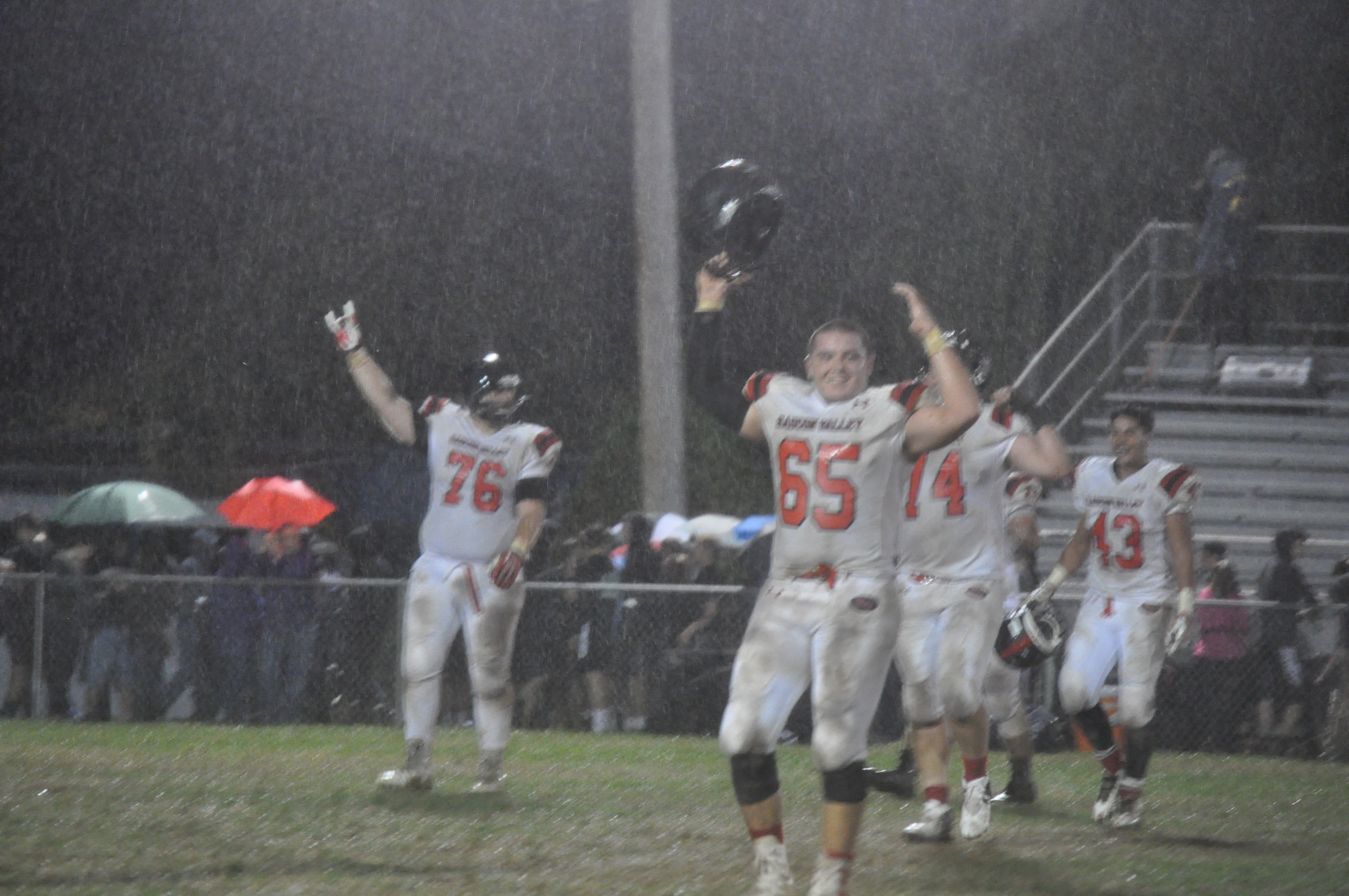 The football gods showered the Panthers with tears of joy after defeating Notre Dame.

It was a monster game for junior Zach Petiet. He rushed 38 times for 272 yards and a touchdown. Brandon Holub also played well in his dual threat role completing 7 of 8 passes for 95 yards and two touchdowns. Holub also rushed 13 times for 48 yards. Holub’s touchdown passes to Alstan Wolfe and Kory Kemmerer were on target and deliberate. Kemmerer finished with four catches for 81 yards. 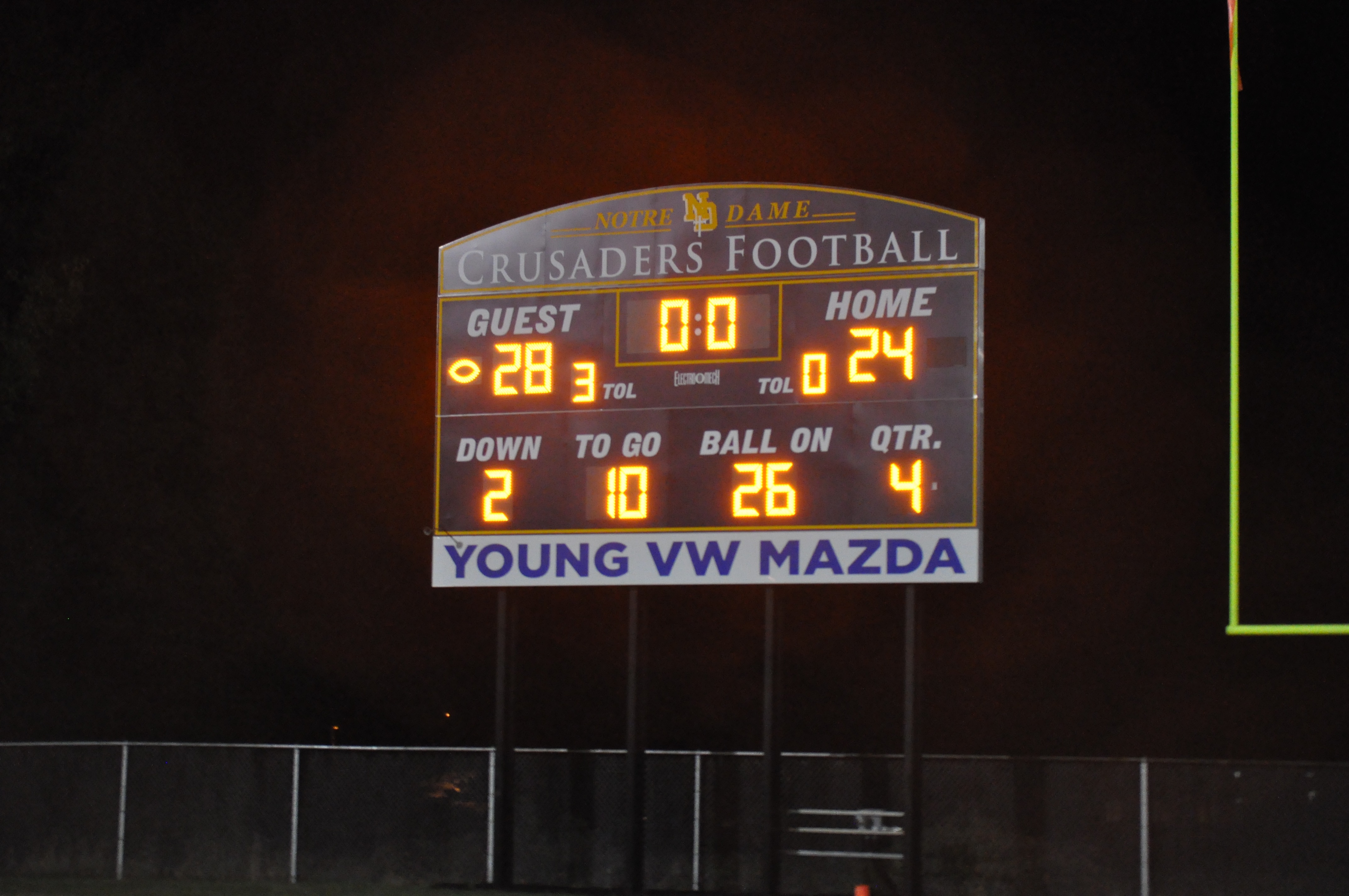 Panthers earned at least a share of a third consecutive Colonial League title.

It was a great team win for the Panthers. But, there is still some work to do. A tough 7-2 Palisades Pirate program is coming to Hellertown next Friday night to try and force a three-way tie for first place. With a win, the Panthers win the Colonial League championship outright. A loss means Saucon Valley will likely be forced to share the title with both Palisades and Notre Dame.

For now, Panther Nation, let us all enjoy this sweet Notre Dame victory. Starting Monday it will be time to look ahead to the Pirates.

Congrats Panthers, it was a job VERY well-done! 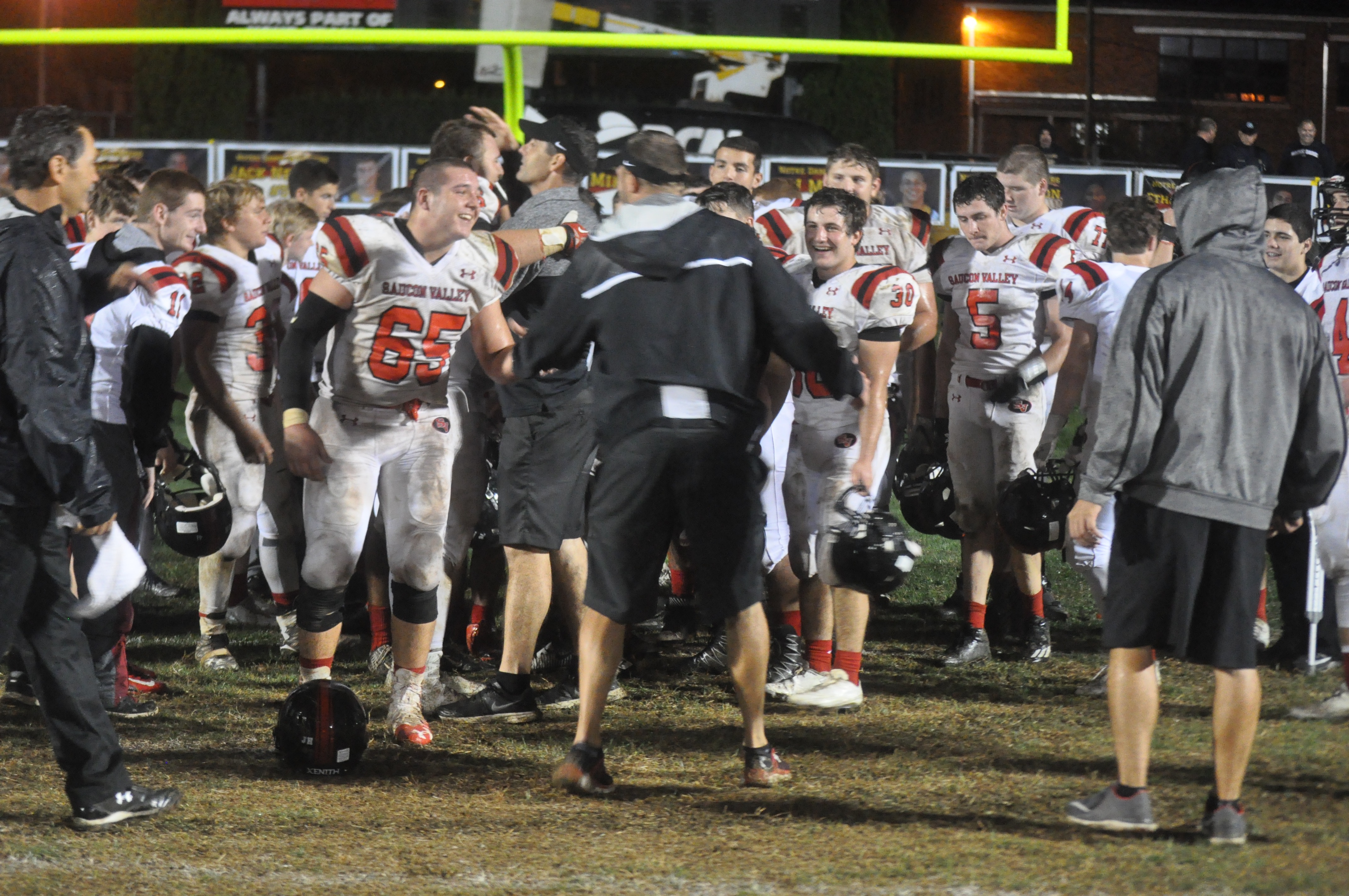 Coach Sams celebrates the victory with his troops.