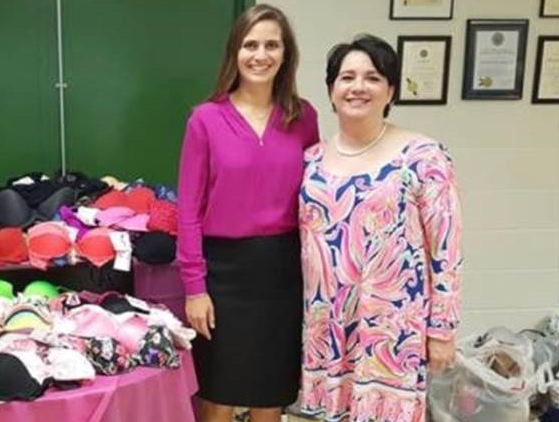 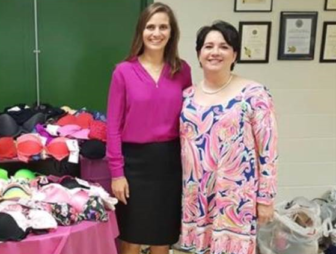 After her mastectomy, Amanda Bergman had a drawer-full of bras she would never wear again. They were in good condition, and they could help someone.

Something good needed to come from her breast cancer diagnosis.

Fueled by a passion to give back, she figured out a way to give her bras new life by donating them to women in need.

“As a woman, it was hard for me to accept that something as simple as a bra might not be accessible, or affordable, to all women,” states Bergman.  She teamed up with Andrea Wolf from the Brem Foundation, a Washington, D.C.-based non-profit committed to educating women about breast cancer and the importance of early detection.

The two created the Re-Bra program–a unique way for women to donate their bras to low-income women who cannot afford bras of their own.

Bringing Re-Bra to Women of the Lehigh Valley

When Tricia Kelly, MD, surgical oncologist at St. Luke’s Cancer Center learned of the initiative, she quickly connected with Bergman and Wolf to bring the initiative to the Lehigh Valley.

“What I love about the Brem Foundation and Re-Bra, is that they pair a healthy dose of education with every bra they give back,” states Kelly. Each bra is laundered, labeled and affixed with a tag that includes the Breast Health Bill of Rights. “This program serves to both educate and empower women in need.”

“We are piloting the program here in Easton,” says Flowers. “Our goal is to expand to other areas of the Valley.”

Women may drop off new or gently used bras in the Re-Bra donation boxes and Dr. Kelly’s team will take care of the rest.

“Our friends at Third Street Alliance, Safe Harbor Easton and St. Paul’s Lutheran Church on the southside of Easton have offered to help distribute the bras to those in need–and Valley Express Cleaners in Coopersburg has generously donated its services to launder all the donated bras,” says Kelly. “It truly is a collaborative community project from start to finish.”

“If it is detected early, breast cancer is highly curable. As a physician, I feel it is my duty to help educate women and help get them the care and support they deserve,” says Kelly. “A person’s economic status shouldn’t hinder her ability to get quality, life-saving health care.”

But Re-Bra would not be Brem’s first reach into the Lehigh Valley. Last year, the Brem Foundation’s B-Fund awarded a grant to St. Luke’s Cancer Center to support the Valley’s low-income population. The B-Fund pays for diagnostic tests for women who cannot afford those tests after an abnormal screening mammogram. These funds are helping women get the early breast cancer diagnoses that can be the difference between life and death.

Three Generations of Education and Perseverance

For Wolf, education and early detection is a life-long passion. Born into a family of strong women, Wolf’s grandmother was diagnosed with breast cancer at age 33 and was given six months to live.

“This was back in a time when cancer surgery was not as advanced,” states Wolf.  Despite great odds, her grandmother persevered and went on to raise her family, see her great-grandchildren born and live 43 years beyond her diagnosis.

Only twelve at the time, Wolf’s mom, Rachel, became determined to pursue a career in medicine. She went on to graduate from Columbia School of Medicine and complete training at Johns Hopkins. At age 37, nationally renowned breast imaging expert Rachel Brem, MD, diagnosed her own breast cancer while she was “test driving” new imaging equipment. It turned out Dr. Brem was a BRCA gene carrier–the gene responsible for a form of genetically-driven breast cancer.

“At age 22, I learned I was BRCA positive,” states Wolf, who serves as CEO of the Brem Foundation. For Wolf, like many others, being able to take control of her destiny was life-affirming. “I had a preventative mastectomy; I wanted to change my family’s narrative.”

Making a Difference, One Bra at a Time

“It’s amazing the smile that comes across their face and how grateful they are,” says Bergman. “One woman told me it made her feel ‘human’ again.”

“We have the power to make people’s stories end well,” echoes Wolf, “and that’s through education and early detection.”

For more on the Brem Foundation and Re-Bra, visit BremFoundation.org.

Note: This story was contributed by St. Luke’s University Health Network. Its publication is part of a news partnership between Saucon Source and SLUHN.