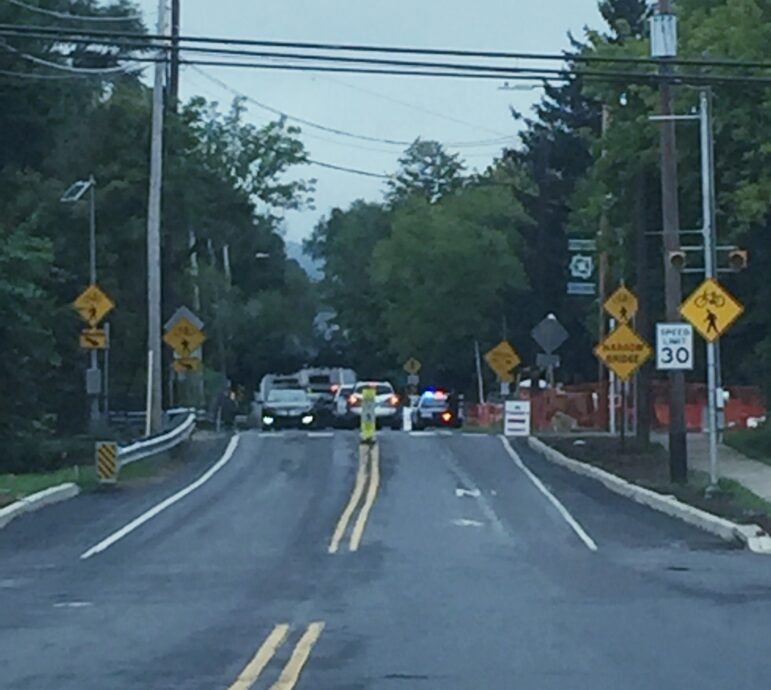 Normally busy Water Street in Hellertown is largely free from traffic Sunday morning, after the closure of the Water Street Bridge until further notice for what PennDOT has described as emergency repairs. The street remains open to the Water Street Park entrance for the Saucon Valley Farmers’ Market, which is held there Sundays from 9 a.m. to 1 p.m.

The Water Street Bridge in Hellertown and Lower Saucon Township was closed until further notice Sunday morning by PennDOT for what are described as emergency repairs.

Information about the nature of the repairs or what led PennDOT to inspect the bridge was not immediately available.

The Borough of Hellertown notified residents of the closure via its email alert system at around 10 a.m. Sunday.

The bridge was temporarily closed several weeks ago following heavy rains that swelled the Saucon Creek, which it spans. That closure lasted less than a day.

In April, the 80-year-old bridge was closed temporarily after a pothole opened in its decking, and Hellertown officials recently expressed doubts about whether the bridge’s deterioration will enable it to remain open until it is scheduled to replaced with a new span in the summer of 2019.

Rain fell overnight last night but it was not clear if weather played any role in Sunday’s closure.

“This bridge is not the property nor the responsibility of The Borough of Hellertown,” the borough emphasized in the email. “All responsibility for maintenance rests with (the) PA Dept of Transportation.”

The Water Street Bridge is a concrete, two-lane span that was built in 1938 and is part of a primary route for motorists entering the borough from the west.