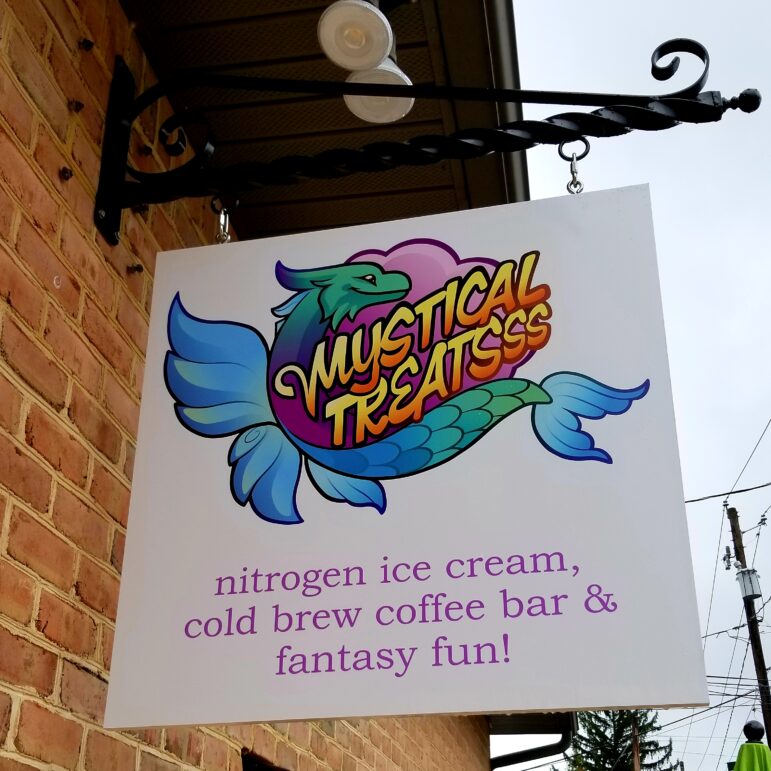 The hanging sign outside Mystical Treatsss, which opens Wednesday, Oct. 10 at 1310 Main Street in Hellertown.

If you like your ice cream extra creamy, your coffee extra smooth and your surroundings filled with unicorns, dragons, mermaids and other fantastical creatures, you’ll probably enjoy a trip to Mystical Treatsss, a unique ice cream shop, coffee bar and store that opens Wednesday at 1310 Main Street in Hellertown. The building formerly housed Pondelek’s Florist & Gifts, before it relocated to the 200 block of Main Street earlier this year. 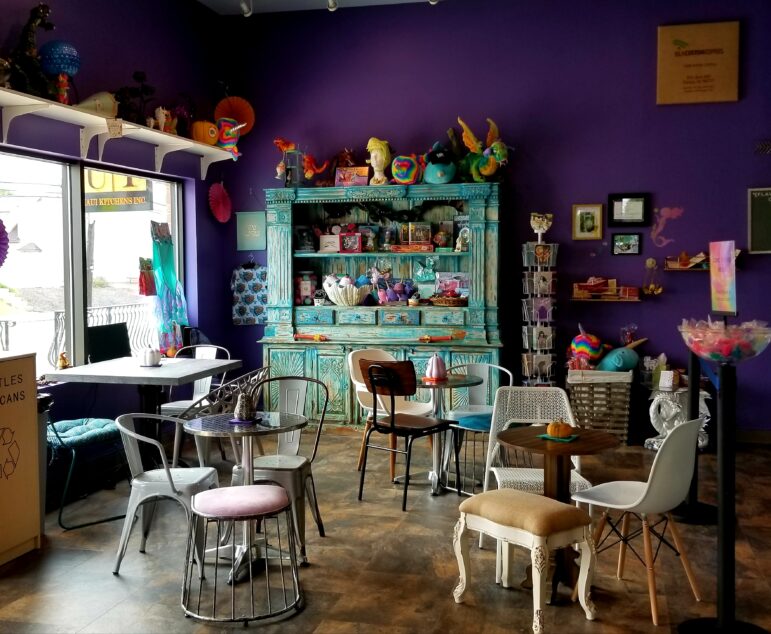 Co-owners Sherry Warren and Bob Weill have completely transformed the former flower shop into a veritable fantasyland filled with whimsical cafe-style seating/decor on one side and a colorful play area and party room on the other. The decor is eclectic and plentiful, with everything from a life-size lit unicorn mid-prance to a ceiling-suspended dragon to a mushroom tabletop with toadstool seating for little ones. Even the bathrooms are replete with things like a mermaid scale wall covering (for the girls) and a dragon-shaped toilet paper holder (for the boys). 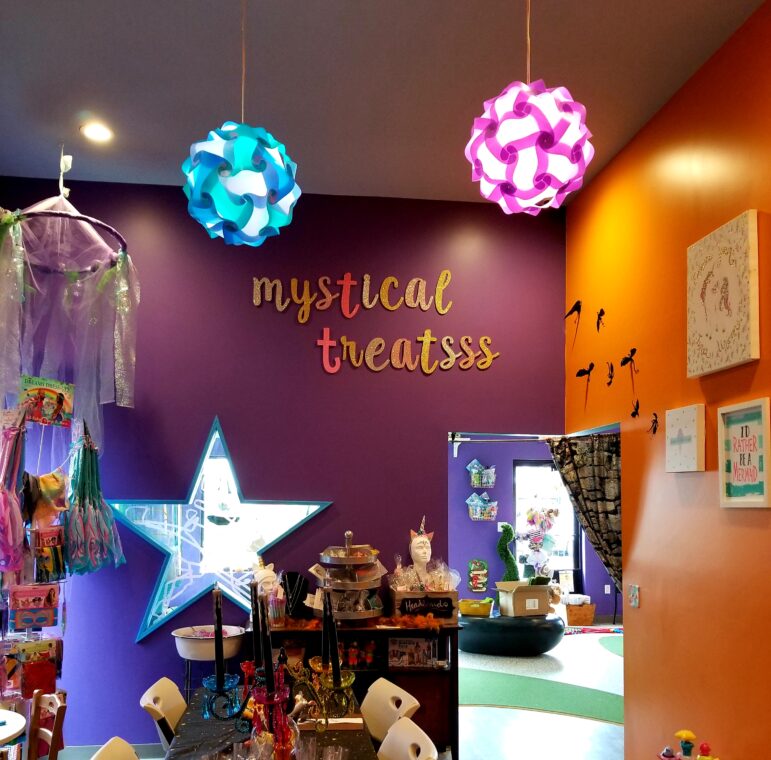 There is no reason for the two extra S’s at the end of the word “Treatsss,” said co-owner and Mystical Treatsss COO Sherry Warren. They’re there just for fun.

The centerpiece of the new business is its gleaming service counter, where customers can order fancifully-named ice cream flavor combinations like Unicorn Wishes (pink cotton candy ice cream with rainbow sprinkles and cotton candy fizzles) and Dragon Poop (ultra-dark chocolate ice cream with chocolate chunks, brownie crunchies, caramel popcorn and chocolate fudge), or design their own ice cream concoction by choosing a base, adding a flavor, adding a swirl-in and then finally choosing a topping. 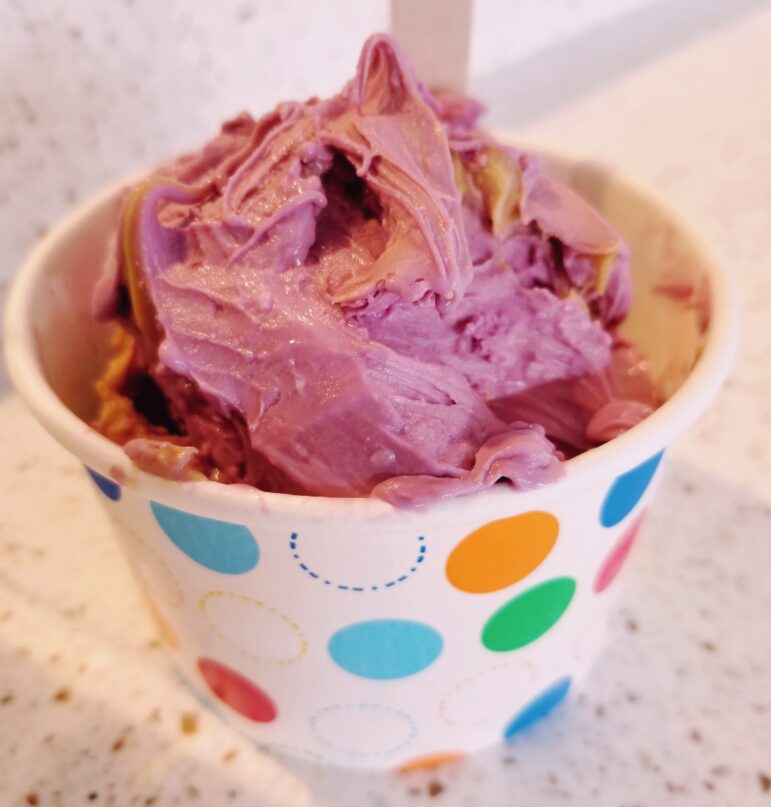 Toppings include things like Graham cracker crumbs and toasted coconut, while swirl-in options include key lime curd, Nutella and marshmallow, to name a few.

The add-in flavors on the menu are mint, cotton candy, jelly, strawberry and cocoa, while the base flavors are natural cream, chocolate, almond, coconut and sugar-free.

Each cup of ice cream is hand-crafted and takes a few minutes to create, although there’s a show of sorts to watch while it’s being built, as the nitrogen that is used in the process is kept at a frosty -320 degrees Fahrenheit. So, as it freezes the ingredients it creates an odorless smoke that overflows the mixing bowl. 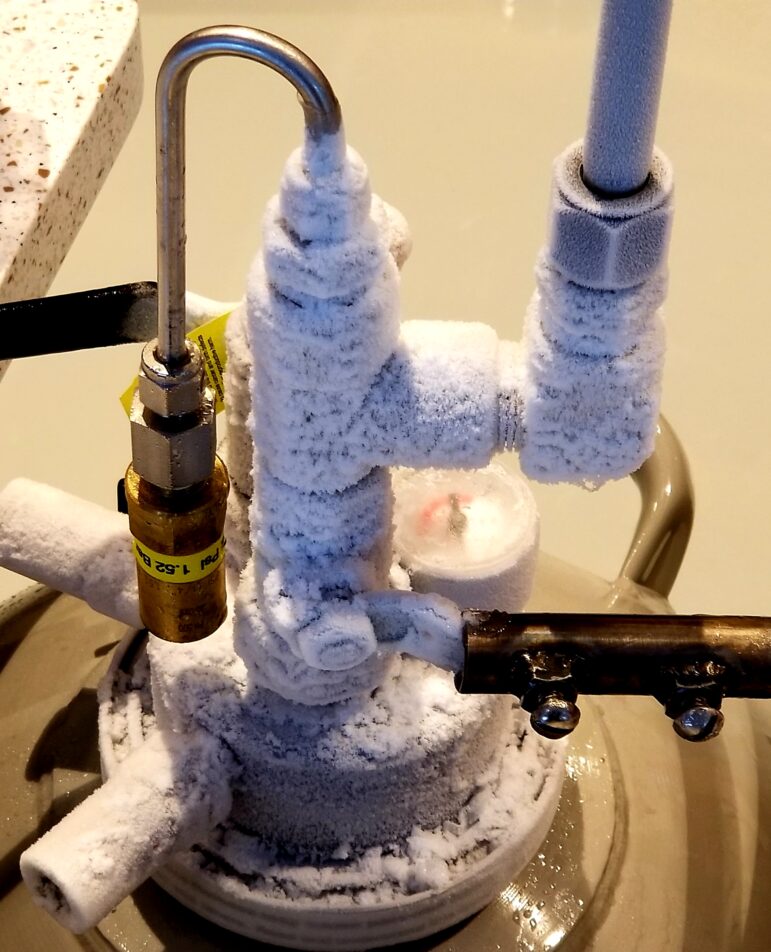 Because it is kept at -320 degrees Fahrenheit the nitrogen used to create ice cream at Mystical Treatsss has a tendency to form ice crystals on the machinery. 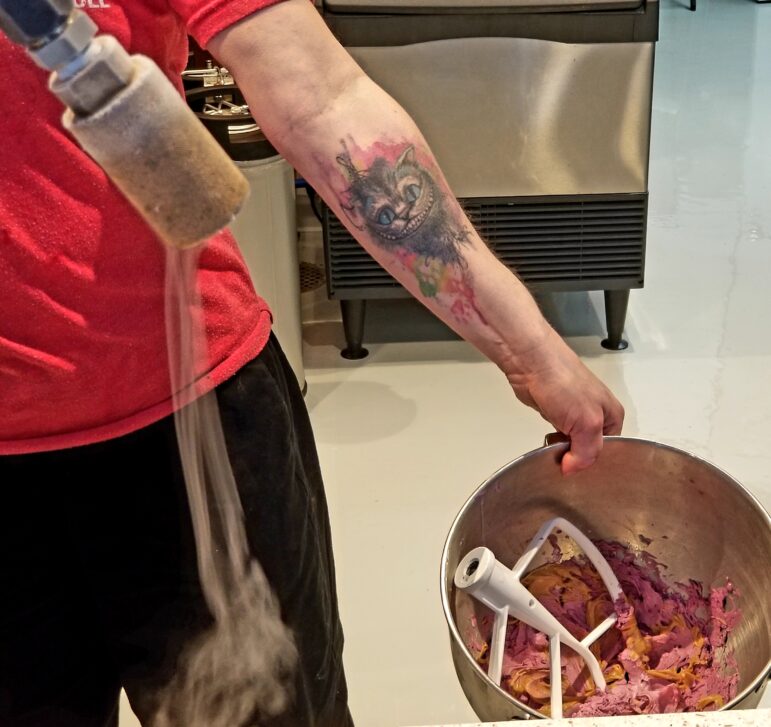 Pixie PB&J is made in a metal mixing bowl at Mystical Treatsss in Hellertown. 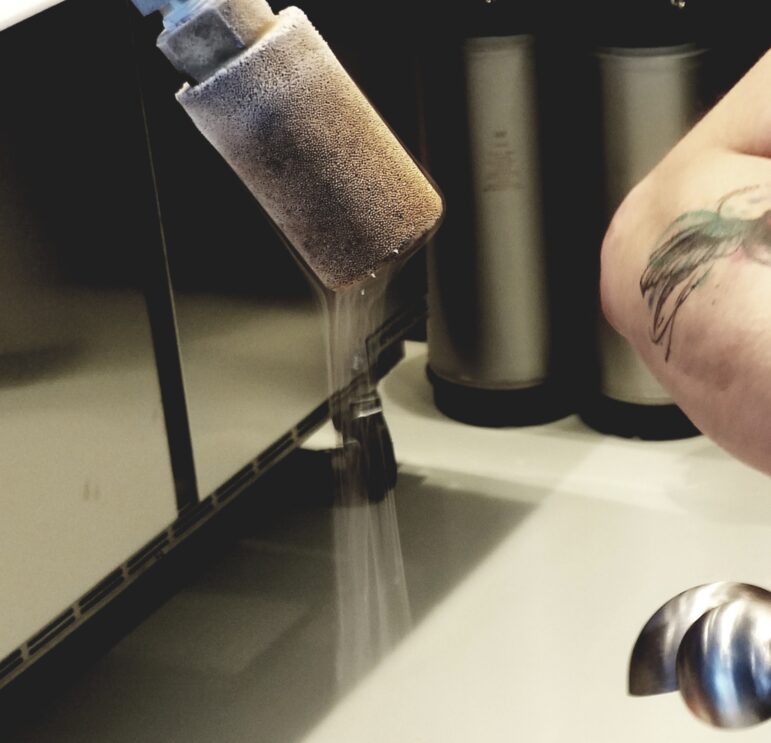 “Liquid nitrogen ice cream takes the same ingredients normally used to make ice cream, but (freezes them) using liquid nitrogen instead of chilling in the freezer,” the Mystical Treatsss website states. “The nitrogen is cold enough to freeze the ingredients in minutes, for an instant treat.”

Warren said the use of nitrogen is safe and noted that the atmosphere itself is composed of approximately 78 percent nitrogen. All of the store’s employees have undergone safety training related to the use of liquid nitrogen as part of food preparation.

Some of the cream that is being used to make Mystical Treatsss’ ice cream is being sourced locally, from Flint Hill Farms in Upper Saucon Township, she noted. 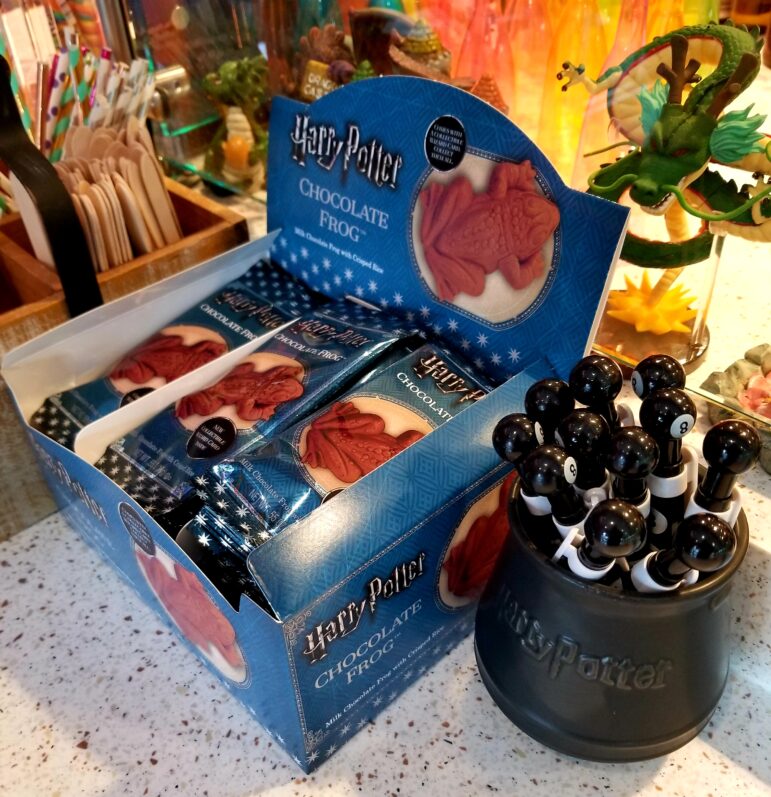 Harry Potter-themed merchandise for sale at Mystical Treatsss in Hellertown

Over on the beverage bar side of the counter, in addition to cold brew coffee, patrons can order chai tea, chocolate milk, apple cider, hot chocolate and a variety of other items.

The coffee bar’s Nitro tap features Honduran and Brazilian blends, as well as a “brew of the day.”

And although currently ice cream, coffee and some baked goods are the primary food and beverage offerings, Warren said the plan is to offer soups, salads and other fare in the future. 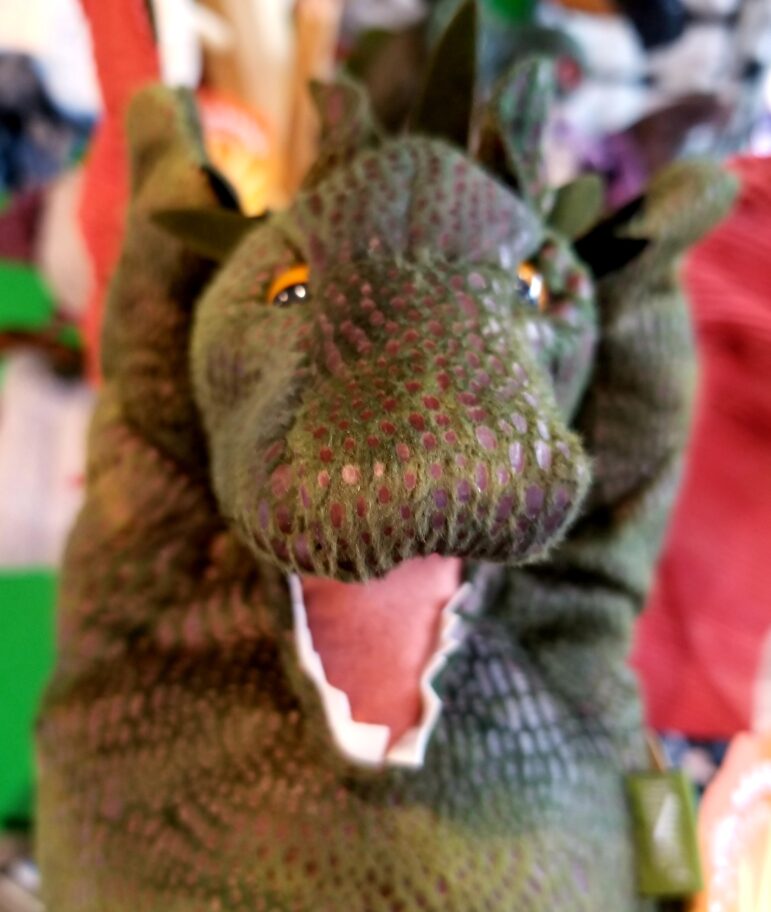 A dragon puppet is one of many puppets you can try on for size (and purchase) at Mystical Treatsss in Hellertown.

Warren said her partner, Bob, is a “foodie” and received inspiration for the fantasy decor of Mystical Treatsss during a business trip to Amsterdam.

A resident of Center Valley, his professional background is in the paper business, she said.

Warren, who’s from Allentown, is a massage therapist, but has been a stay-at-home-mom to her two children for the past several years.

In spite of that, “I’m a wannabe mermaid myself,” she admitted.

“I love Halloween. I love dressing up,” Warren said, noting that the store will be decorated for the upcoming holiday. And beyond that, “this can be full-time Halloween here,” she said.

The store has five employees and a party room that is available to rent for birthday parties and other special events. Catering is also available. More information about these options can be found on the website.

Some of the other things you can do at Mystical Treatsss include shopping for fantasy gifts and toys, and creating a stuffed dragon or unicorn. 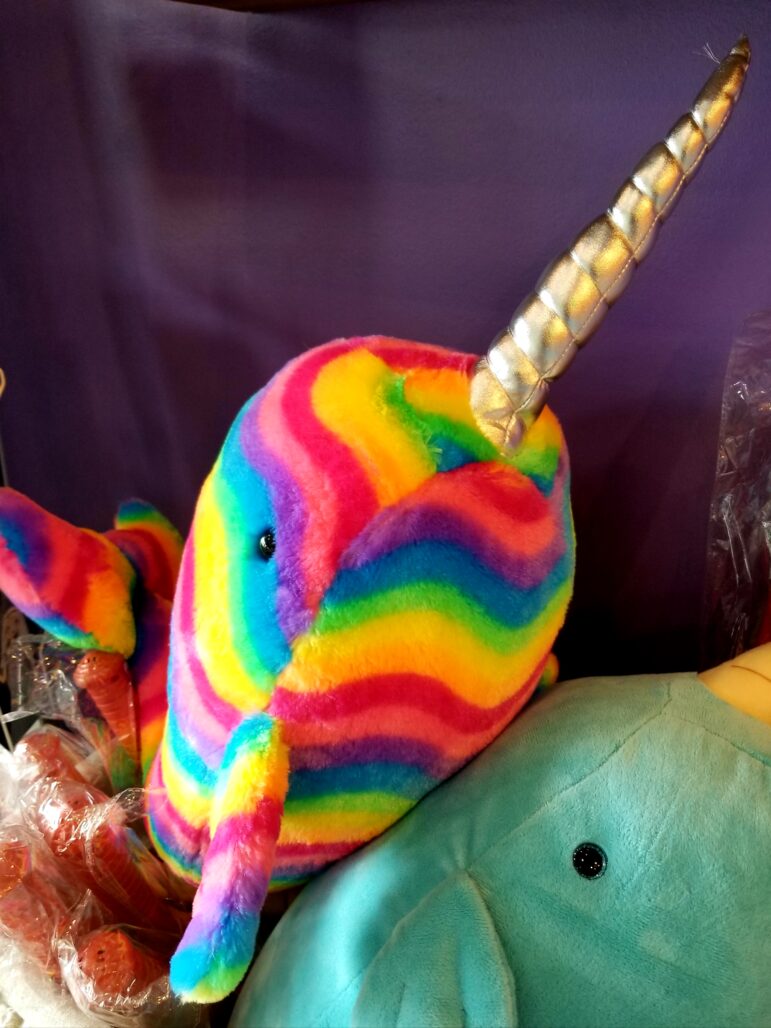 A rainbow-colored stuffed narwal is something you’ll see at Mystical Treatsss that you likely wouldn’t anywhere else in Hellertown.

Warren said she also hopes to continue to add to and develop the business with novel offerings like a “secret menu.” A few chains such as Starbucks offer secret menus.

“Everything has to be different and fun and cute and pretty,” she said.

Mystical Treatsss will be closed Mondays and Tuesdays during the winter.

Parking is available in front of the store and in a shared lot behind it.

Warren said that a formal ribbon-cutting and grand opening with the Hellertown-Lower Saucon Chamber of Commerce will be held in the spring. 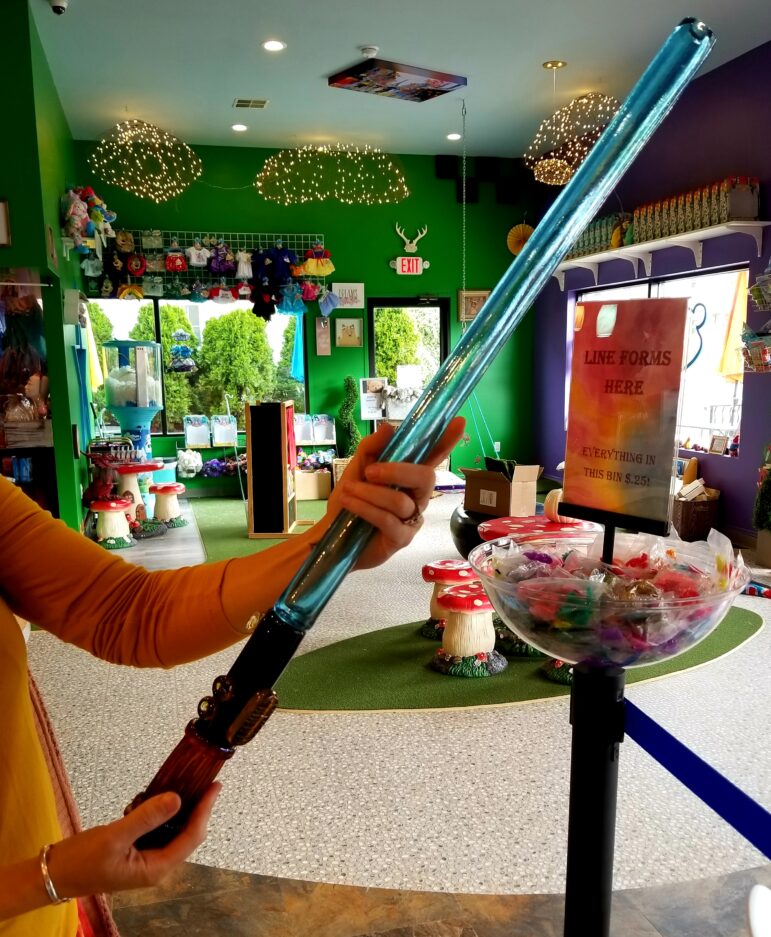 A replica light saber similar made to look like the ones in “Star Wars” was produced by a glass-blower at the Banana Factory in Bethlehem. 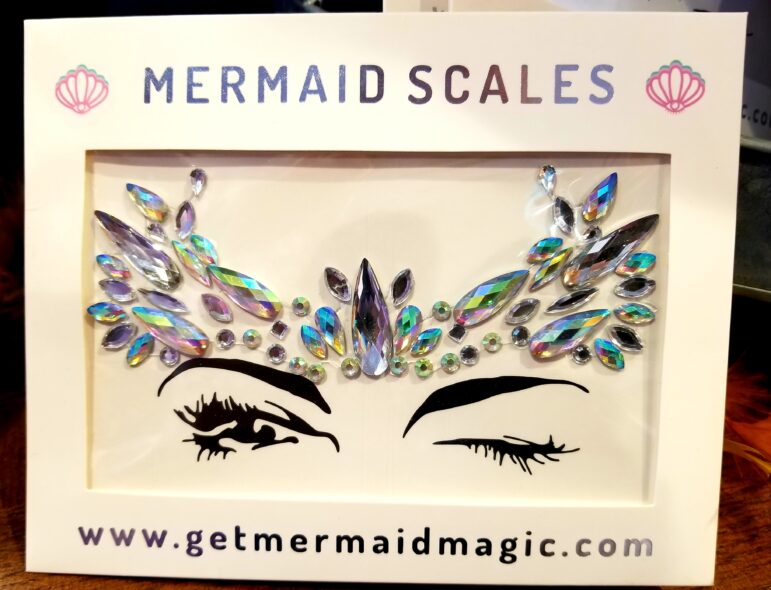 Mermaid scales for sale at Mystical Treatsss in Hellertown 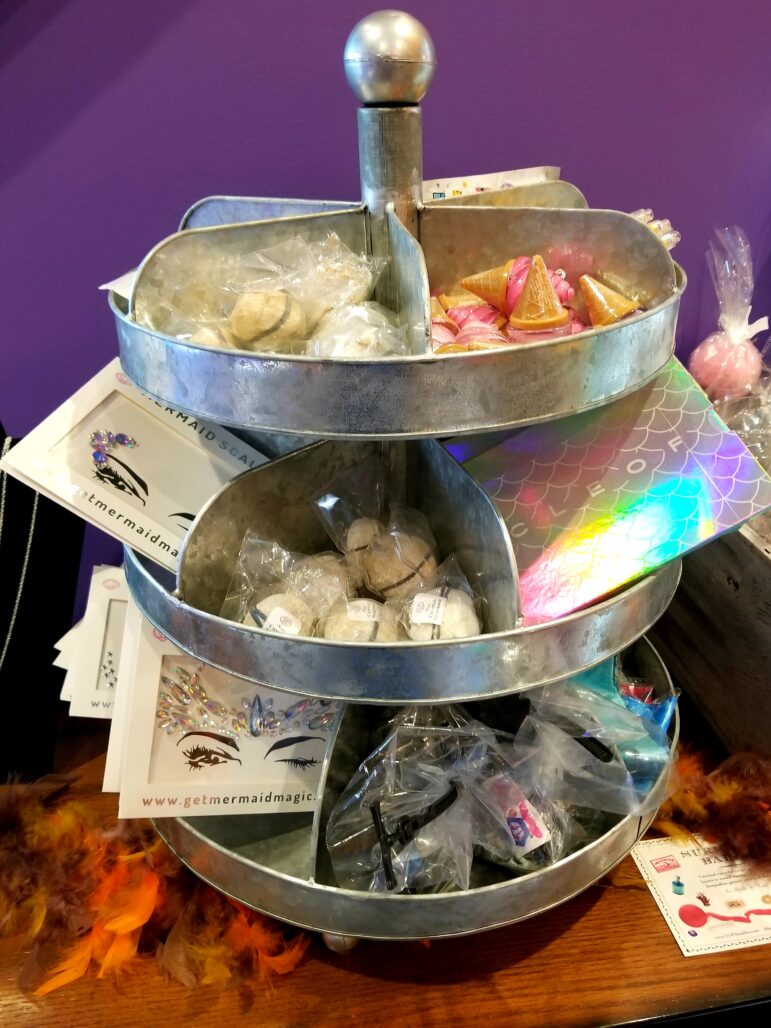 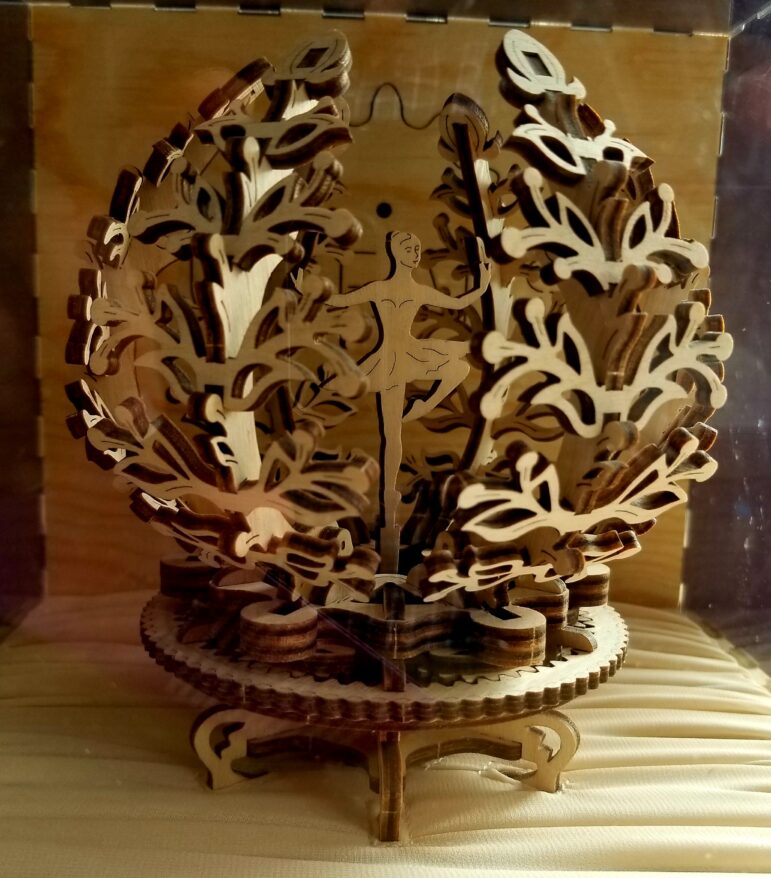 A motion activated wood-carving makes something as mundane as throwing away a piece of garbage a fun activity at Mystical Treatsss in Hellertown. 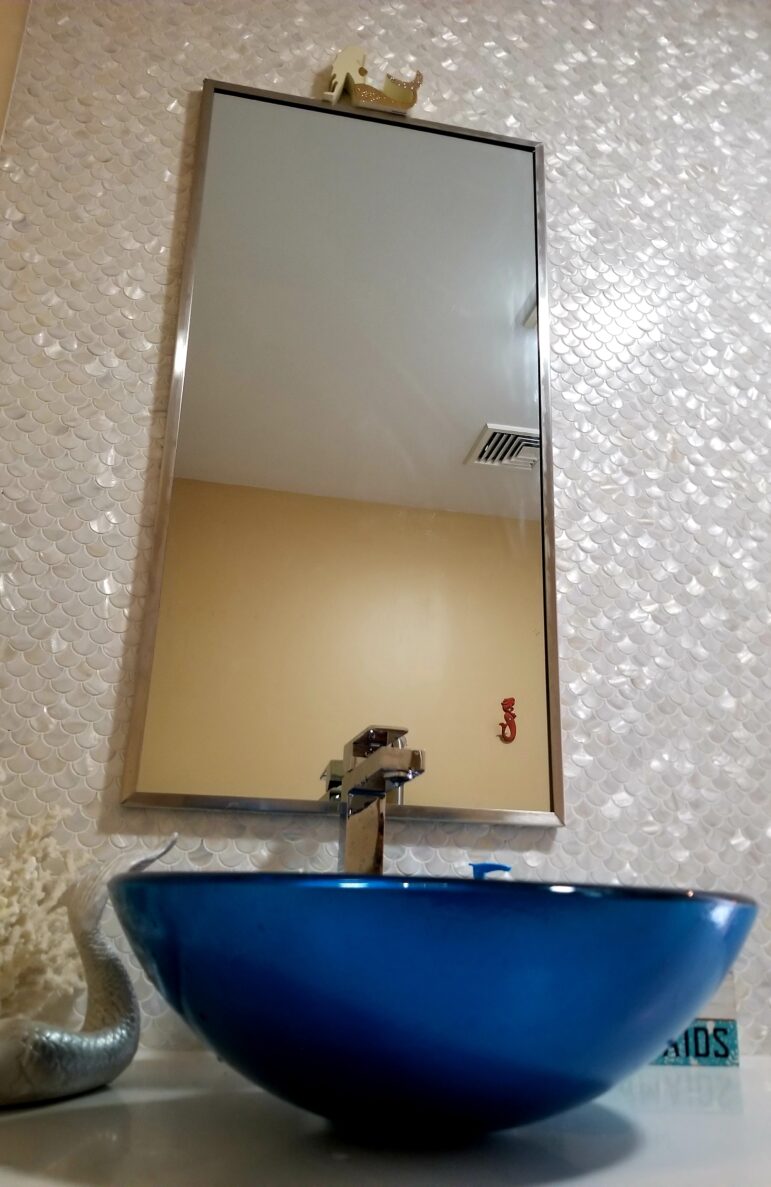 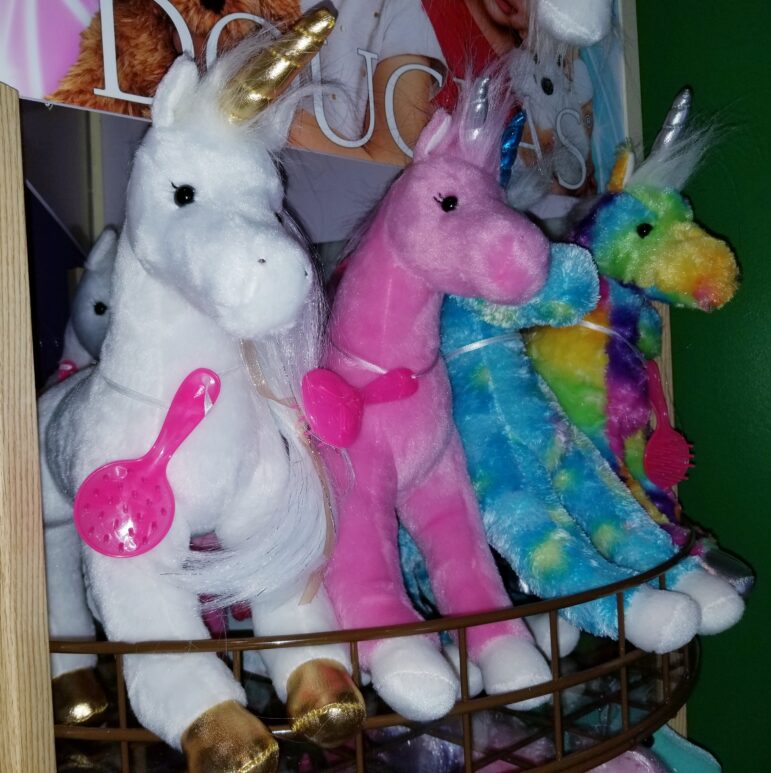 Stuffed unicorns for sale at Mystical Treatsss in Hellertown 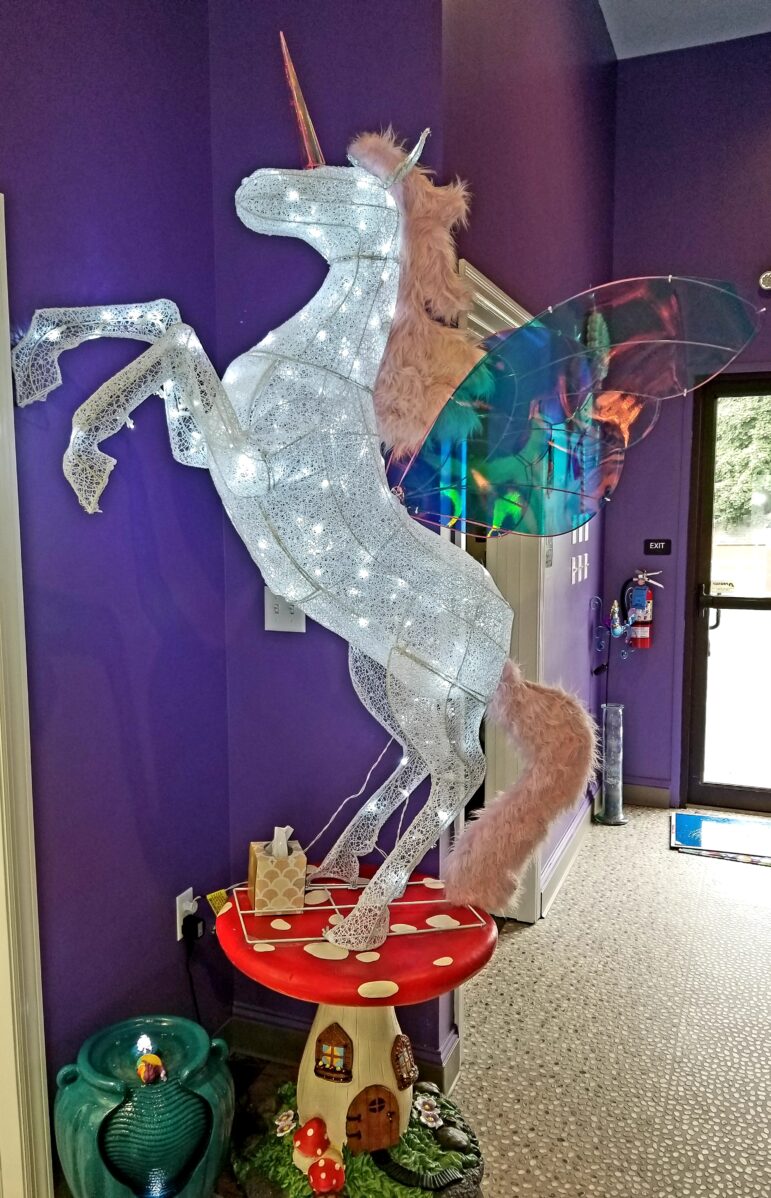