When Saucon Valley schools open Aug. 26 that volume will increase further, especially during morning arrival and afternoon dismissal times. However, if school-related backups result, as things stand borough police won’t be on hand to assist with moving traffic through the intersection.

That’s because the Pennsylvania Department of Transportation has denied a borough request for $5,000 to pay for officers to manually operate the traffic light at Walnut and Main streets during what are likely to be peak periods of weekday congestion.

Hellertown Police Chief Robert Shupp noted that assuming the bridge is completed on time on Sept. 27, there will be 19 school days before Water Street is again open to traffic.

“They’re not going to give us any money,” Shupp told borough council members at their meeting Monday night. “They said they have none.”

Referring to a letter from engineer Tim Penrose, Shupp said PennDOT’s stance is that the borough should have requested funding for the traffic police earlier.

In fact, the two-month project was never supposed to overlap with the school year, which Saucon Source reporting from February confirms.

“We never thought of this because (the bridge) was supposed to be done before school started,” Shupp stressed.

The Walnut Street intersection is likely to be tested by the morning and afternoon traffic floes to and from school because it handles the bulk of school bus traffic bound for Lower Saucon Township, west of the borough.

News of PennDOT’s refusal to fund the traffic details was met with consternation by borough officials, and council president Tom Rieger made little effort to conceal his displeasure over it.

“You know it doesn’t shock me that PennDOT doesn’t care,” he said. Referring to the amount of money requested to pay for the traffic detail, he said they likely “spent more than that on coffee breaks this morning.”

Rieger said he was “highly disappointed” in PennDOT’s decision and encouraged other council members to individually contact State Rep. Robert Freeman (D-136) and State Sen. Lisa Boscola (D-18) in hopes that they might intercede on the borough’s behalf.

Rieger also encouraged residents to contact their legislators to request the funding.

Council previously requested funding from the county and assistance from PennDOT with installing left turn arrows at the intersection of Walnut and Main streets during the Water Street Bridge closure.

That request was also made too late, according to PennDOT, because a traffic study to determine whether the arrows are needed must be conducted during the school year.

A traffic study is currently scheduled to be conducted there this fall, albeit after the new Water Street Bridge is open. 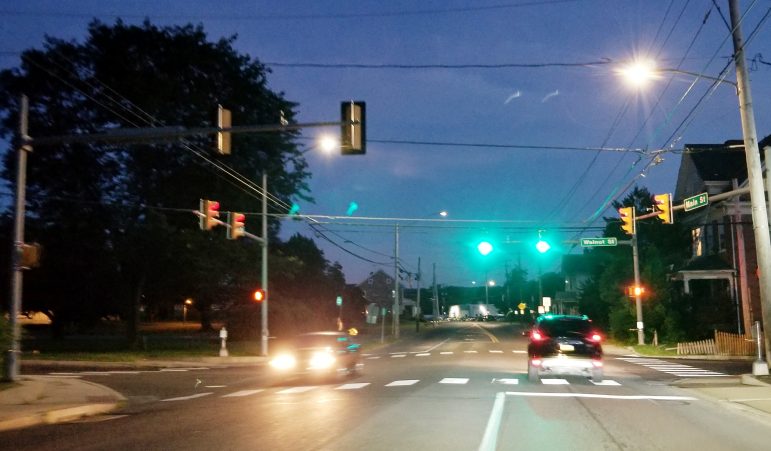 The intersection of Main and Walnut streets in Hellertown, looking south on Main Street.