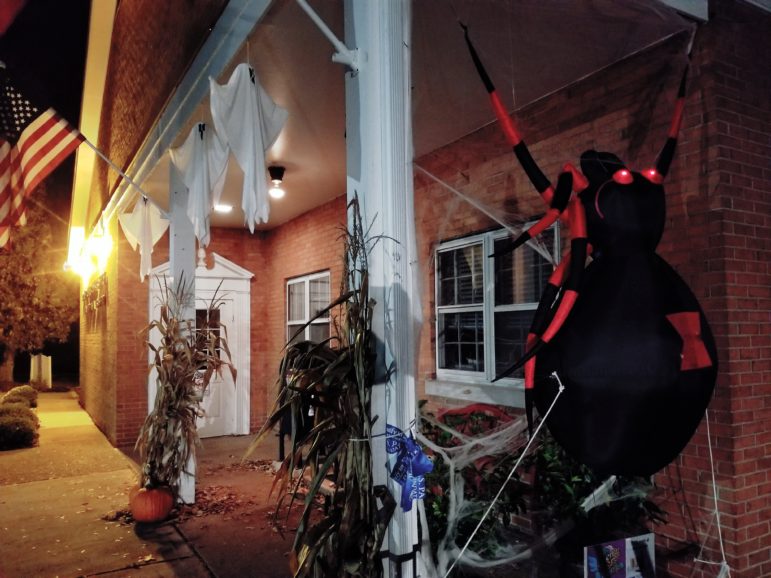 The Hellertown Post Office is decorated with cornstalks, ghosts and a large inflatable spider for Halloween. On Thursday, Oct. 31 it will host a free community event that will coincide with Trick or Treat in Hellertown borough and Lower Saucon Township.

UPDATE: Halloween at the Post Office is now Halloween at the fire station on the truck floor. Due to the weather forecast for this evening the event will be held indoors at Dewey Fire Company #1, which is located nearby at 502 Durham St., Hellertown.

The rain that forced the cancellation of Sunday’s Saucon Valley Spirit Parade in Hellertown also left postmaster Joe DiRusso with an unusual problem on his hands.

DiRusso had collected 500 pounds of donated Halloween treats for a candy refill station the post office planned to host during the parade, and now needed a way to distribute it.

The solution to this decidedly sweet dilemma was discussed at Hellertown Borough Council’s meeting Monday night, where council voiced support for DiRusso’s latest idea: to host at “Halloween at the Post Office” event on Thursday, Oct. 31, from 5:30 to 9 p.m.

Trick-or-Treat in the borough will be held from 6 to 8 p.m. that night, and that means “there’s going to be a lot of kids coming to get the candy,” DiRusso explained to council in asking for permission to close Delaware Avenue at Water Street for the duration of the special community event.

DiRusso said Dewey Fire Company will bring a firetruck to the event, and both the Hellertown and Lower Saucon Township police departments will also have vehicles there.

He said he hopes to recruit the Saucon Valley High School marching band to perform music at the party, to try to help recreate a bit of the festive fall atmosphere the community would have enjoyed Sunday had the Spirit Parade not been rained out.

Mayor David Heintzelman–who is also the parade committee chairman–briefly addressed the cancellation and alluded to criticisms about it that were voiced on social media, but stressed that there is no point in dwelling on it.

Heintzelman encouraged anyone with lingering hard feelings about the loss of this year’s parade to weather to spend some time thinking about the families who lost their homes in a large explosion in the city of Allentown over the weekend.

The next regular Hellertown Borough Council meeting will be held Monday, Nov. 4 at 7 p.m. at Hellertown Borough Hall, 685 Main St., Hellertown, Pa. Meetings are open to the public and draft meeting agendas are posted in advance on the borough’s website.

In addition to the Halloween at the Post Office event, another special Trick-or-Treat night event that is planned in the borough is the Hellertown Historical Society’s Trick-or-Treat at the Old Hellertown Jail. Visitors to the historic one-room jail will get a spooky surprise and the opportunity to learn more about the history of Hellertown.