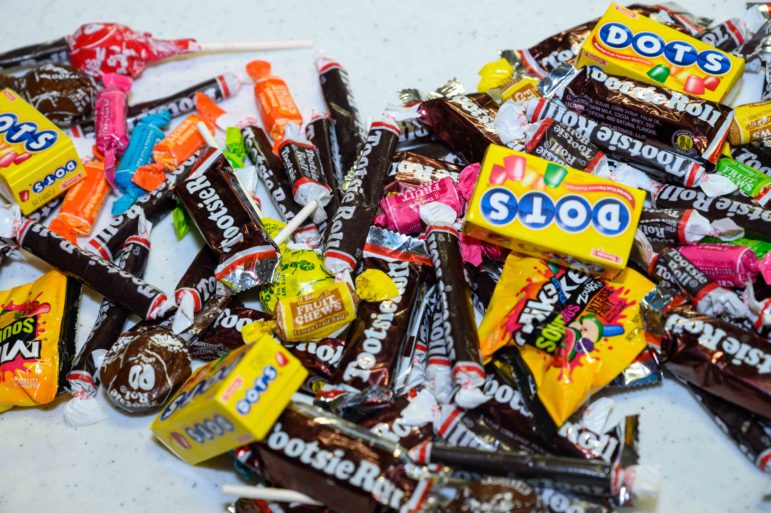 All about the candy? With questions about rain dates and whether the event should even be held at a uniform time popping up, it seems like Trick or Treat is more complicated than ever. (FILE PHOTO)

Maybe you weren’t a fan of having Trick or Treat on Thursday, Oct. 31. Maybe it was because of the weather forecast, which was for heavy rain and also included a chance of thunderstorms (they held off til later). Maybe it was because it meant your kids would be out and eating candy on a school night. Or maybe you just don’t like being told what you and your family should do. Whatever the reason, has it ever crossed your mind to say “the heck with it” and simply Trick or Treat on a different night of your own choosing?

That’s apparently what more than one Lower Saucon Township neighborhood has decided to do this year, including a neighborhood that was involved in a controversy regarding public access to its roads two years ago.

Saucon Source was informed earlier today that some residents of the neighborhood that includes Surrey and Quarter Mile roads chose not to participate in Trick or Treat from 6 to 8 p.m. Thursday, instead deciding they would hold it Friday evening.

A township resident whose child was Trick-or-Treating in the area Thursday night said she was shocked to learn the neighborhood decided to “totally ignore” the times for Trick or Treat established by municipal leaders in an annual vote earlier this year. The day and time of Trick or Treat is decided via an official vote in most municipalities each year.

“Most houses had their lights on, and when our kids went up to the houses they were told ‘sorry, we changed Trick or Treat to tomorrow night,” the source said.

“How can they do that?” she asked. “They just totally ignored what the township and borough decided to do–which was the right call–to keep it on Halloween night.”

When Saucon Source reached out to township officials we were able to confirm that “other areas are also (holding Trick or Treat Friday night)” on their own.

Since township police typically patrol in full force to help keep Trick-or-Treaters safe during the event, the fact that little ones will be out and about in costume on a different night–without any officials knowing about it–could represent a potential safety concern.

It is important to note, however, that it is neither a criminal nor a civil violation to Trick or Treat at a time that is different from the officially-established township time. Whether it is a neighborly or wise thing to do could be a matter for debate.

What do you think about Lower Saucon’s rogue Trick or Treat neighborhoods? Do you stand behind them? Or do you think rescheduling Trick or Treat to suit one’s personal preferences sets a bad precedent and could represent a safety issue? Vote in the poll.