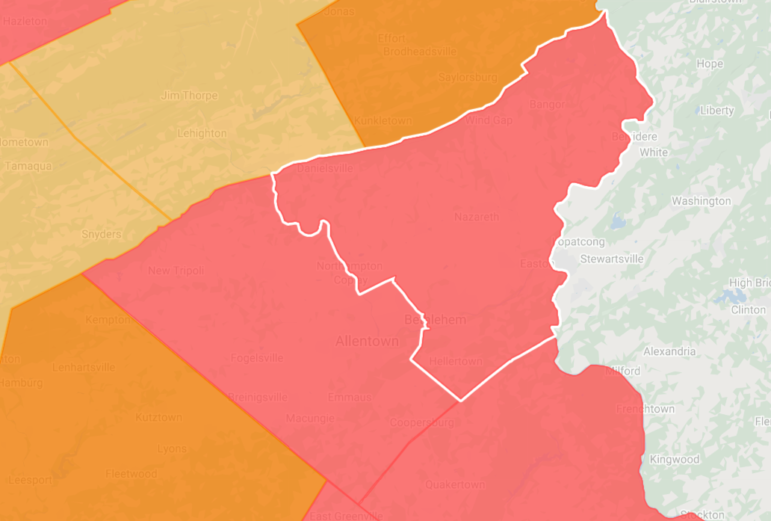 The total number of confirmed cases of the novel coronavirus across Lehigh and Northampton counties stood at 2,176 Wednesday. Seventeen people have died from the disease in Northampton County, while 11 have succumbed to it in Lehigh County, according to the Pennsylvania Department of Health.

The total number of confirmed cases of the novel coronavirus (COVID-19) in Lehigh and Northampton counties has increased to more than 2,000, according to Pennsylvania Department of Health data released Wednesday at noon.

Although its population is slightly less than that of its neighbor to the west–and for reasons that remain unclear–Northampton County continues to outpace Lehigh County in terms of the number of deaths caused by the disease within its borders.

Another three people in Northampton County died from COVID-19 Tuesday, bringing the county’s death total to 17 the department of health said. In Lehigh County, one additional person succumbed to the illness and became the eleventh person to die from it there.

According to health department officials, an additional 70 people died from COVID-19 across Pennsylvania Tuesday, which brought the state’s total number of deaths from novel coronavirus to 310. That hike represented an approximately 29.2 percent increase in the number of deaths in Pennsylvania in one day, however it was still less than the increase recorded on Tuesday, when 80 additional COVID-19 deaths were reported.

There are now confirmed cases in all of Pennsylvania’s 67 counties, although deaths have been reported in fewer than half of them, and most of the deaths have occurred in the counties that make up the greater Pittsburgh area and across eastern Pennsylvania.

While it may seem like good news that the death rate is increasing at less than the state average in Lehigh and Northampton counties, the latest data indicates that the number of confirmed cases in the Lehigh Valley is increasing a rate higher than Pennsylvania’s average.

The state confirmed an additional 1,680 cases of COVID-19 Tuesday, which brought the total number of confirmed cases statewide to 16,239. That represented an increase of about 11.5 percent, which was slightly less than the percentage increase recorded Monday.

The number of cases in a four-county area that has consistently had the highest per capita rates of anywhere in Pennsylvania and includes Monroe, Lehigh, Luzerne and Northampton counties increased from 3,512 on Monday to 3,981 on Tuesday, which represents an increase of about 13.3 percent.

State health secretary Dr. Rachel Levine has called the rough semicircle formed by the four counties near northeast Pennsylvania’s border with New Jersey an area of concern for state health officials and epidemiologists studying and responding to the outbreak.

Northampton County has released a limited amount of information about the individuals who have died from the novel coronavirus within the county since the pandemic began.

The entire state of Pennsylvania is under a stay-at-home order until at least April 30, with most businesses and all schools closed as part of a massive effort to help contain and prevent the virus’s spread. Wolf and Levine continue to urge residents to stay home unless they must go to work at an essential business or perform a “life-sustaining” task such as buying food. Most parks and trails are open, and Pennsylvanians are permitted to enjoy visits to them as long as they follow recommended social distancing requirements.