A 35-year-old Hellertown man has been charged with first-degree felony aggravated assault after police say he allegedly beat another man, knocking him unconscious and breaking his jaw. 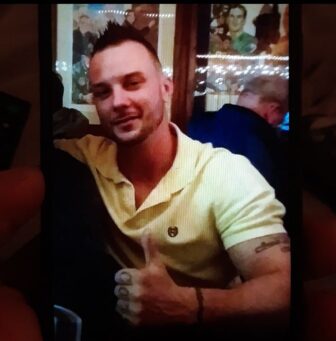 Brett Matthew Getz, pictured in a publicly posted photo uploaded to his personal Facebook page in August 2019. Getz has been charged with felony aggravated assault in a case in which he is accused of beating a man unconscious and breaking his jaw.

Channel 69 News cited court records in reporting Saturday that Brett Matthew Getz was reportedly arguing with the other man in the 1200 block of Second Avenue when the fight began shortly after 10 p.m. Thursday.

After allegedly knocking the man out by punching him in the face, Getz allegedly punched him several more times while he was unconscious on the ground, the news site reported in the story, which also noted that the victim “could barely speak” when authorities arrived and required emergency surgery.

According to court records, Getz has a prior conviction for aggravated assault.

In March 2014, he pleaded guilty to Felony 2 aggravated assault as part of a negotiated plea deal and was sentenced to 18 to 36 months in jail by Lehigh County Court of Common Pleas Judge William E. Ford, court records state.

In that case, Getz was accused of assaulting his girlfriend and threatening to kill her in their Lower Macungie Township apartment, the Morning Call reported in July 2013.

In the Hellertown case, in addition to aggravated assault Getz is also charged with simple assault and reckless endangerment–both second-degree misdemeanors–as well as two counts of summary harassment, per Northampton County court records.

A preliminary hearing in his case is scheduled to be held Thursday, June 18 at 3 p.m. before District Judge Alan Mege at District Court 03-2-04 in Lower Saucon Township, court records indicated.